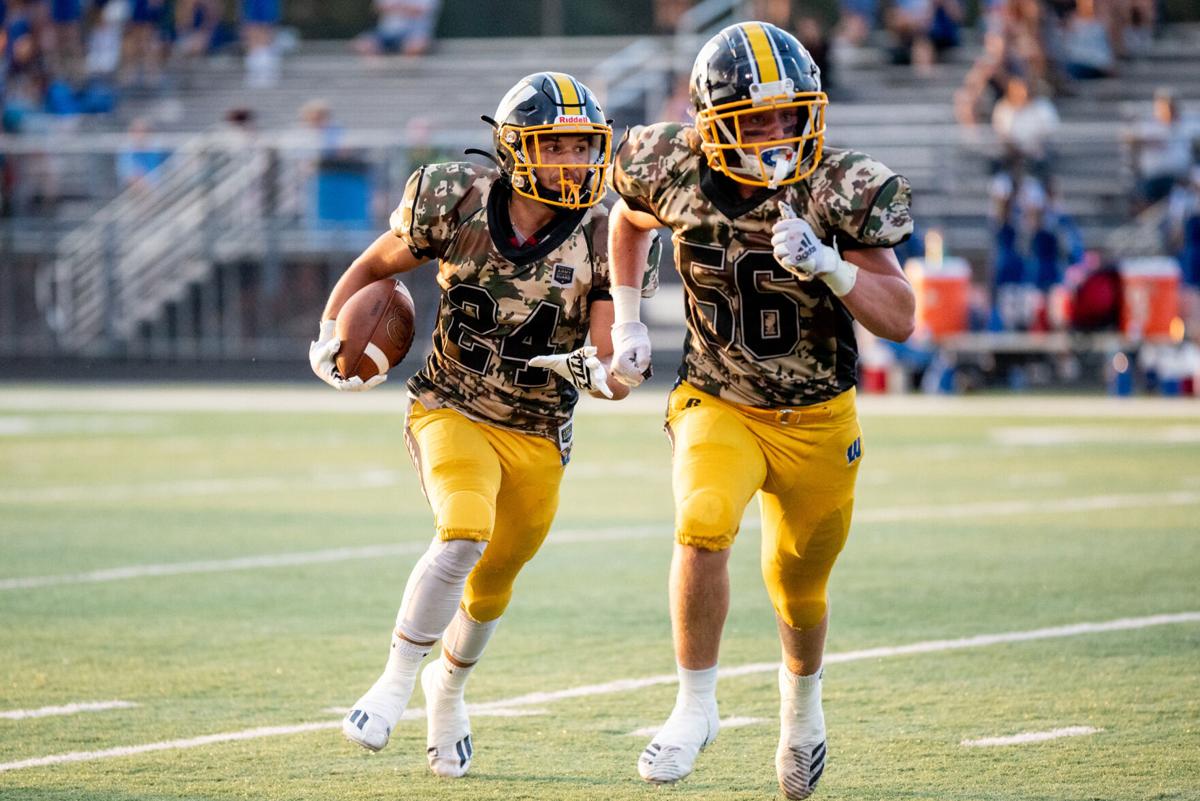 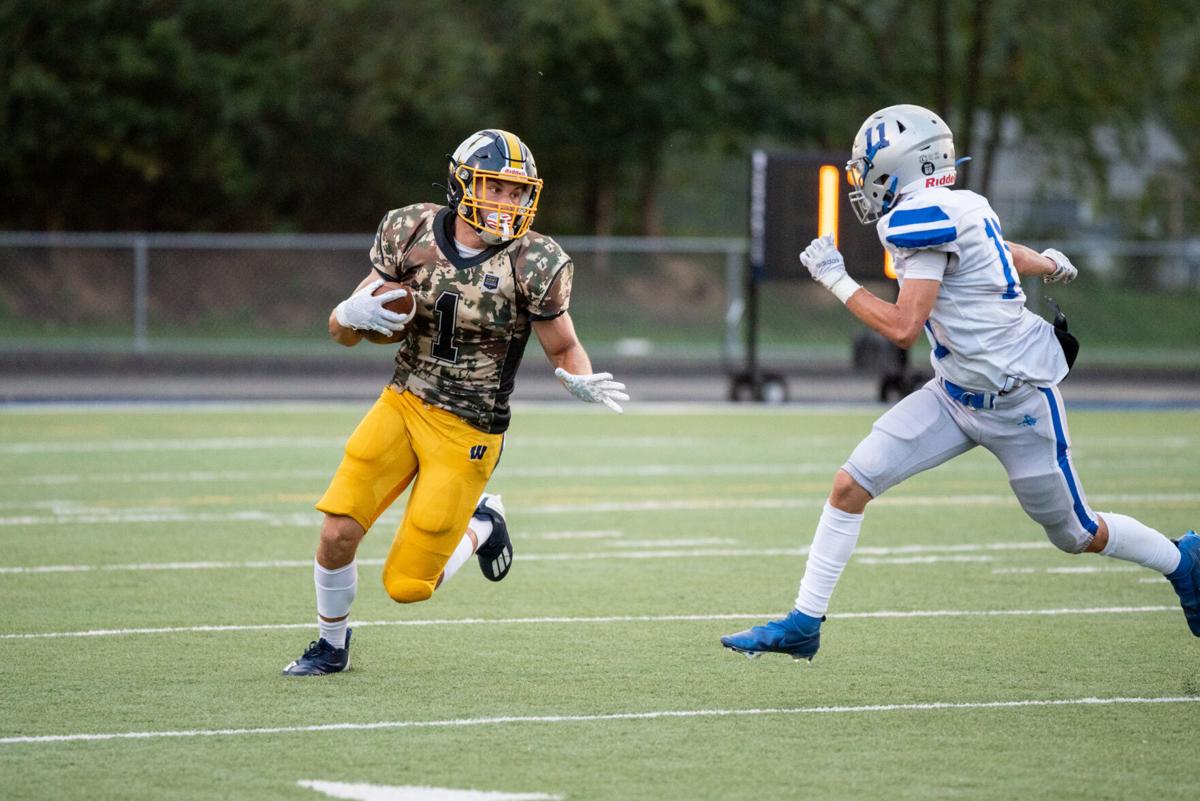 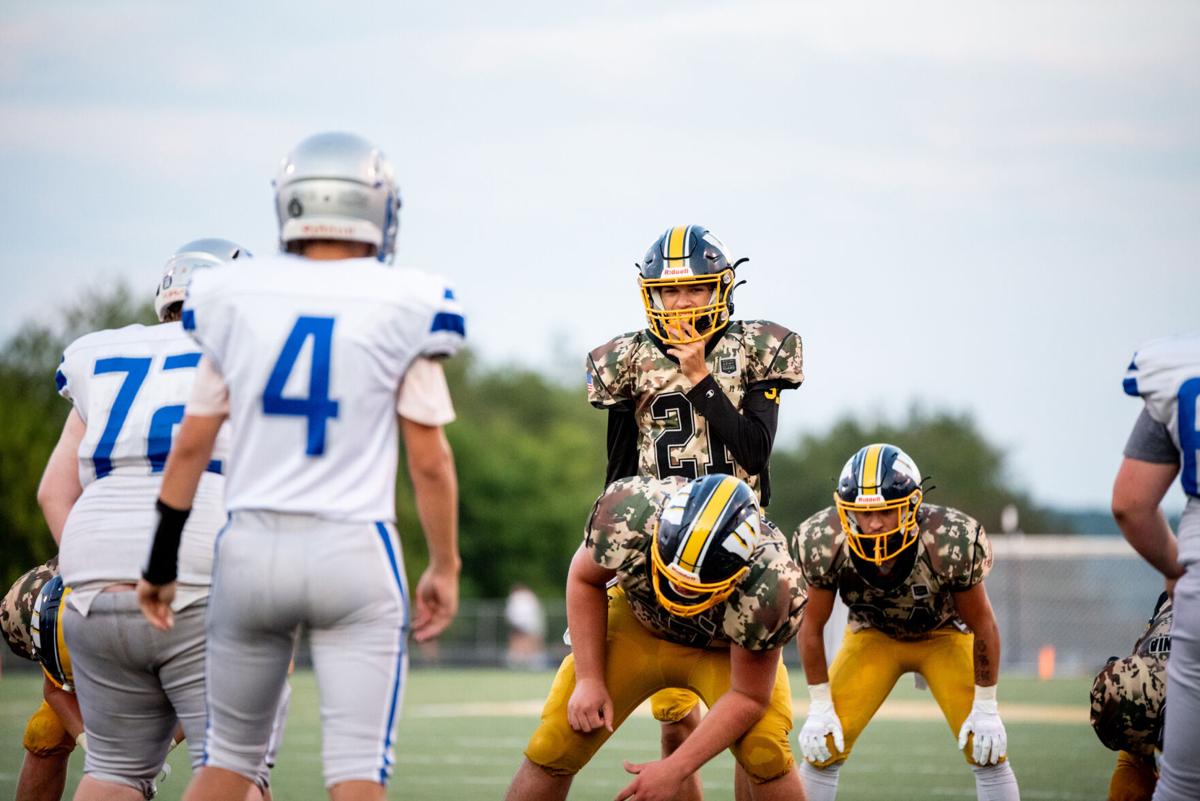 Wilmington’s Tuff McConahy gets set before the start of a play against Reynolds on Friday at Greyhound Stadium. 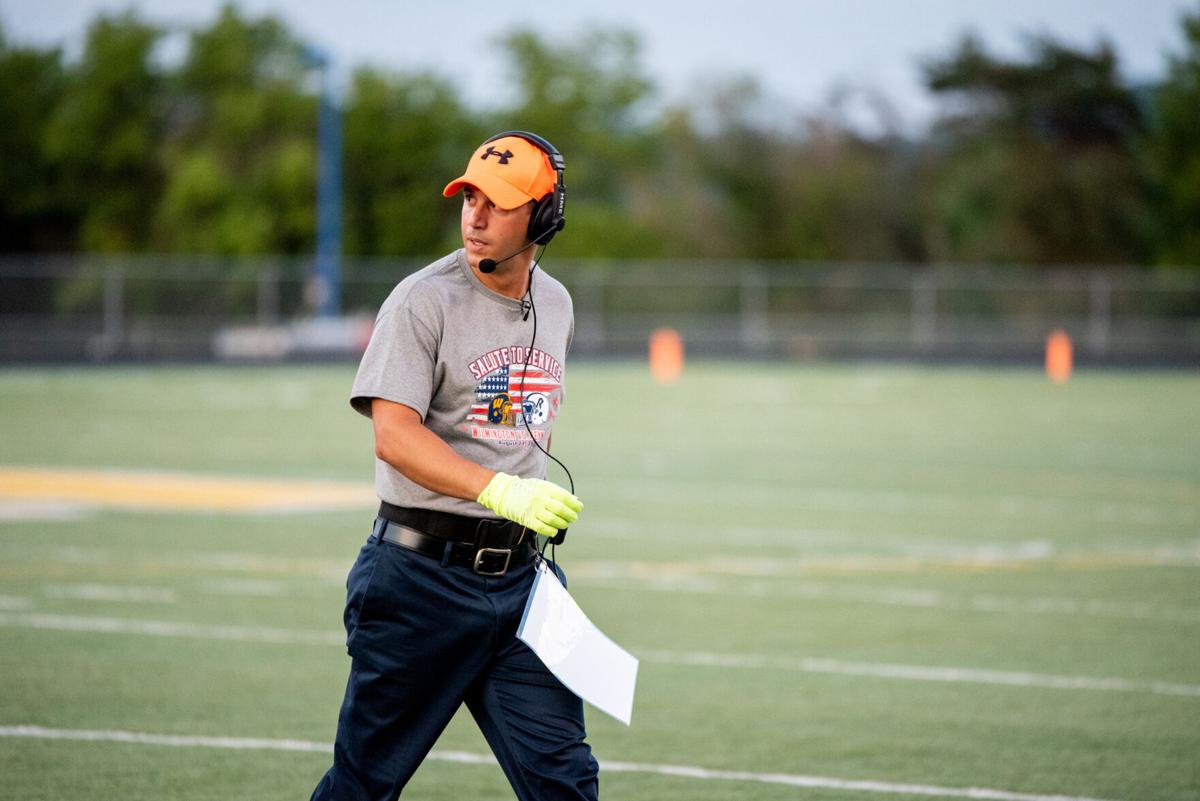 Wilmington’s Tuff McConahy gets set before the start of a play against Reynolds on Friday at Greyhound Stadium.

Having 17 Greyhounds graduate from a 10-win, state finalist squad, what was Wilmington High football program’s mind-set entering the 2021 season? Was the Greyhounds’ glass half empty, or half full?

“You can have all the talent in the world, but it’s about all the heart you can put out,” Penwell poignantly summarized.

At Greyhounds Stadium, the contest pitted the reigning District 10 Class 2A and 1A champions. However, Raiders’ coach Josh Mull said,

“Anytime there’s a Wilmington team, they’re absolutely well-coached. They execute, and that’s exactly what we did not do (Friday). We went over things all week long, and we made mistakes that we should’ve been making day one (of preseason camp). That happens.

“I said to the kids, ‘That stuff’s fixable.’ We just have to get back to work (this) morning and get ready for next week,” Mull added.

Five-time D-10 Class 2A kingpin Wilmington went out to a 14-0 halftime lead, then dominated the line of scrimmage in scoring 28 third-period points. Edwards’ 77-yard scoring sprint was the highlight of his game-high 11-carry, 150-yard performance.

“I thought our line did an outstanding job. I think they took over the game in the second half,” assessed Hounds coach Brandon Phillian, the 2020 PIAA Class 2A coach of the year. “We talked to them at halftime about mental toughness — you know, it’s hot — and I thought they came out physical to start the second half, and that carried throughout the rest of the game.”

“They do a nice job staying low, they get those nice, tight splits, and they’re well-coached,” observed an admiring Mull — a former collegiate lineman for Lock Haven University — regarding the Greyhounds. “ ... Our game is a little more vertical; there’s is still power football. Kudos to them.”

“I love seeing Luke run the ball; he’s so fast,” Penwell praised. “He worked really, really hard this offseason to get where he is ... “

“I thought Luke Edwards ran the ball terrifically well,” Phillian observed. “I thought early on he was taking what was there, having good, solid runs. So we just told him to ‘Stay with it, Lukie, keep doing your thing and those runs are gonna break,’ and you saw that break open in the second half.

“Cole McCallister had back-to-back big-time plays, and it was a real joy to watch him catch that ‘fade’ in the back of the end zone — I thought Tuff threw a great ball up there, and Cole went up there and made a great, athletic catch. and then to come back on the ensuing series for a Pick-Six ... just big-time plays from our senior captains.”

“I knew (for McConahy) there was gonna be a lot of butterflies coming in for the opening game,” Phillian acknowledged. “But I thought he ran the offense very well, thought he executed very well, Very happy and proud of his performance.”

Another highlight was freshman running back Caleb Rossi’s 38-yard run around left end for a fourth-frame score.

For Reynolds — which went 9-1, won the program’s first District 10 title in 15 years, and advanced to the 2020 Class 1A Final Four — Jaylen Wagner went for 66 yards rushing and also pilfered a pass to conclude the 1st half.

Despite the dominant season-opening win over a quality opponent, Phillian is focused exclusively on the future.

“Where do we want to go?” he rhetorically asked. “We want to remain humble and we want to remain hungry, and that hunger piece is looking to improve and get better. We’re certainly happy with the outcome, but there’s a lot of things for a young football team that we can learn from and grow from as a result of this game. and we’re happy and looking forward to doing that this coming week.”

The pensive Penwell assessed, “I thought the line played extraordinarily well. We all blocked really well, like we’re taught, got to the second level (of Reynolds’ defense), especially. Getting those ‘backers wasn’t easy, but it’s all part of the job.”

Although he is the lone returnee along the line, pressure, Penwell said, did not come into play.

“Everybody in the locker room, we all had beliefs in ourselves. But there we some (outside) doubters, there was a lot of hate comin’ toward us. But I think we proved ourselves — we’re back.

“I’m the only lineman returning from last year, but I don’t think of myself being above everybody else. We’re all equal; it’s just that someone’s gotta lead.