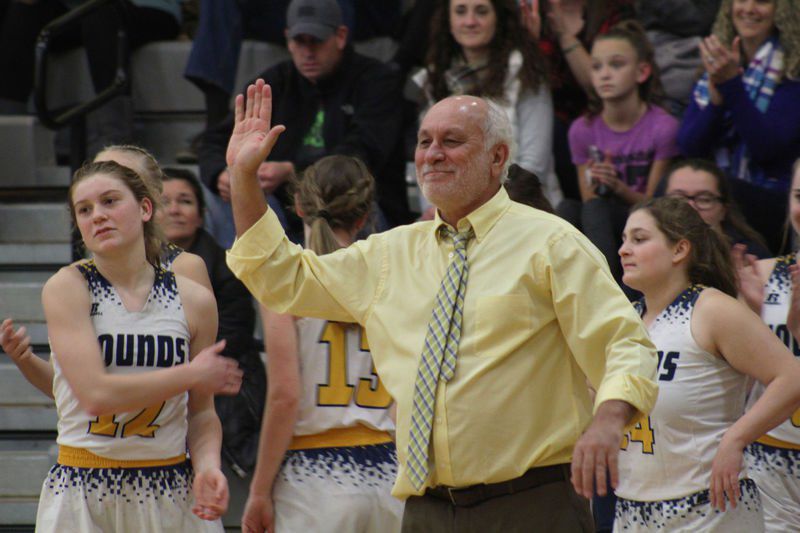 Wilmington High coach Rick Holzworth hoped to lead his girls team into the playoffs this year. 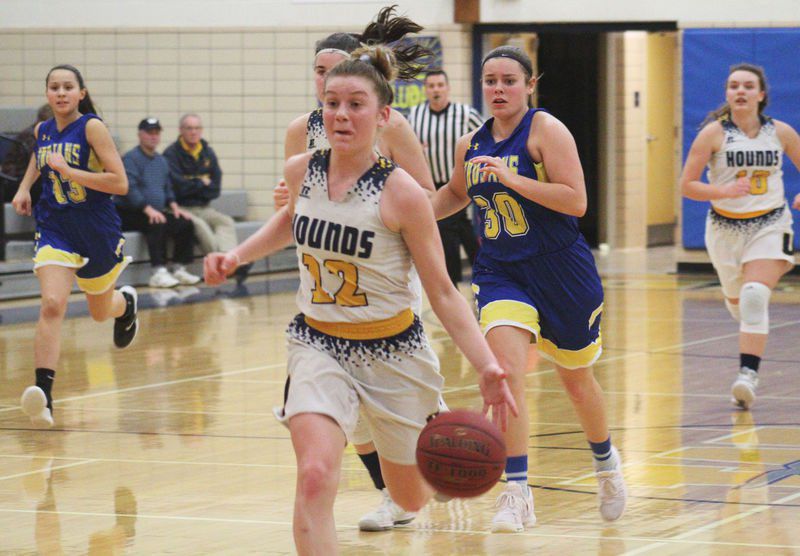 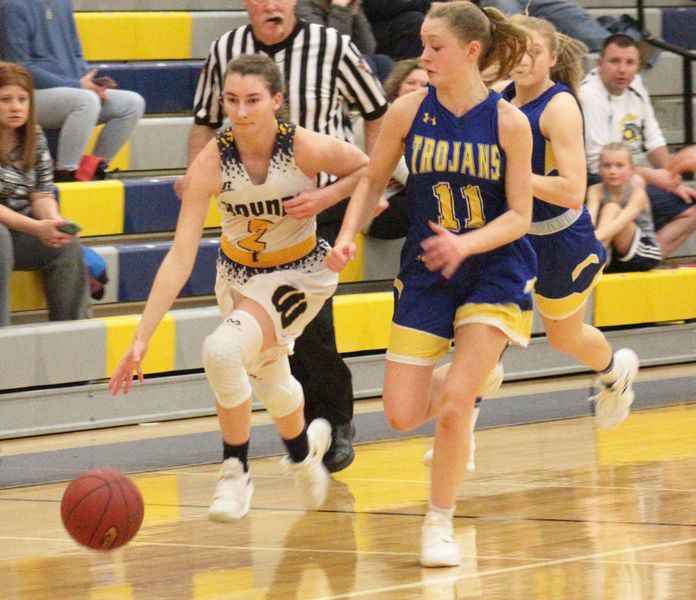 Wilmington High coach Rick Holzworth hoped to lead his girls team into the playoffs this year.

The Wilmington High girls basketball players had been looking forward to leading the Lady Greyhounds into the District 10 playoffs since they were named co-captains by their teammates for the 2018-19 season.

Last week, though, Glavach and McConahy learned that the Wilmington girls are not going to the playoffs at all. School officials say that an administrative policy drafted 21/2 years ago contributed to the decision to keep the Lady Greyhounds from postseason play.

The administrative regulation, approved in 2016, states that a team’s participation in the postseason can be approved or denied by the administration based on several factors, including overall and section record. It does appear to allow for flexibility even if a team finishes under .500. If participation is denied, the regulation states that the coach can appeal to the superintendent, who may then present the appeal to the school board at the next scheduled meeting.

Wilmington, coached by Rick Holzworth for the past three years, finished 2-8 in District 10, Region 2-2A, 8-14 overall. Since all teams make the playoffs in District 10, Holzworth said his team was on the court practicing on Feb. 3 when he was approached by athletic director Brandy Sanford and told to sign paperwork that would opt the Lady Greyhounds out of the playoffs.

“I immediately said no,” Holzworth said. “Why would we do that? We have a young team and, whether you have a winning record or not, the playoffs are a reward for hard work all season. And you never know what’s going to happen when you get there. You have to take your best shot, that’s why you compete.

“She said that a policy was in place that stated that sub-.500 teams had to opt out of the playoffs so we were out. I said, ‘but we went to the playoffs last year when were 8-13.’ She told me that was a different situation.”

Holzworth said the exchange ended there and he told Sanford he would discuss the matter with Matty, which he did at first in a phone call at the end of practice with his team gathered around him. He said Matty told him he was not completely familiar with the policy, but would check into it.

A day later, Holzworth said he encountered Matty outside the gymnasium before practice began. “Dr. Matty said, ‘We decided not to let you go,’ ” Holzworth said.

Holzworth said that 11/2 hours later, he was having a post-practice discussion with his team when Sanford entered the team room.

“She held the paper out for me to sign,” he said. “I told her again, ‘We want to play,’ and she told me to sign the paper. She said the deadline was the next day and I had no choice.

“The girls knew what was going on.”

Holzworth said he conveyed again to Sanford that he felt the decision would be detrimental to his team with three games to play.

“Last year we were under .500 and nothing was mentioned,” he said. “I said, we’re a very young team and we want to play. We have no seniors, we have everybody back next year. We need the experience of a playoff game.

“I’ve been coaching for 40 years, so I know how intimidating it can be to go out on the court for a playoff game for the first time. You need that experience if you’re going to get better.”

That night, Holzworth reached out to school board member Bob Curry, who is chairman of the school board’s athletic committee. McConahy, the starting point guard on Holzworth’s team, is Curry’s granddaughter.

“I told Bob what had happened and he said he knew absolutely nothing about it,” Holzworth said. “He said he had never heard of this rule and was surprised.”

Curry concurred, and inquired as to whether it was too late to consider a reversal. The deadline for playoff declaration came and went last week.

“I’ve been on the school board for 111/2 years and if we ever established this policy, I don’t remember it and don’t recall being a part of it,” he said. “But now I’m told that it was an administrative policy, so the school board would not have been involved.

“Obviously, the decision was made before I heard about it.”

Curry said that he, too, asked why the team was allowed to participate in the playoffs last year with a sub-.500 record.

“I guess they decide this on a year-to-year basis,” he said. “I do think we need to discuss this. It was basically one bus ride that we needed to pay for, possibly two. But at the same time, we try not to micromanage. We hire people to do our managing. Bottom line, though, I certainly don’t want to see anything in place that could hurt the program in any way.”

‘BEST DECISION FOR THE TEAM’

Sanford said she made what she felt was the best decision for the team and said circumstances were different last year when the decision was made to let it go to the postseason.

“We have a stringent policy on this,” she said. “You have to be either .500 overall or in your region. And yes, we made an exception last year. We looked at the individual situation. I did my homework on this and feel I did what was in the girls’ best interest. Last year they were 5-6 in the region (in actuality, 6-8). This year they were 1-5 in the region (their final region record was 2-8). I did not want to see them go to a playoff game and embarrass themselves with a 60-point loss.”

However, since Wilmington competes in a combined Class AAA/AA region, it only would play Class AA teams in the playoffs and would have had a first-round game against another third-place team from District 10, Class 2A. The Lady Greyhounds have not won a playoff game in many years, although Sanford, who coached the Wilmington girls from 2010-2014, said a team she coached was a postseason winner. In actuality, Sanford’s three playoff teams lost in the postseason in 2010-11 to Villa Maria, 73-14; in 2011-12 again to Villa Maria, 77-12 and in 2013-14 to Girard, 45-36.

“This was our chance to win a playoff game, taking on another third-place team,” Holzworth said. “All we wanted was a chance to give it our best shot. That’s all we asked for. If these girls didn’t care, if I didn’t care, we would have said, let’s just pack everything up. But we didn’t say that.”

Matty, who was hired as superintendent in July 2016, two months before the policy was approved, said he agrees with Sanford that the best decision was made for the team.

“We felt that we didn’t really accomplish what we needed to this season,” he said. “If we had had a better season, we might have OK’d it. It wasn’t something that we took lightly.

“And the coach signed off on it,” Matty added.

“What was I going to do? My boss was telling me to sign, so I signed. I felt helpless,” Holzworth said. “This decision immediately affected the atmosphere at our last three practices and games. It put an air of depression over a team that has had nothing but great attitudes all year long.”

McConahy said that the district’s decision has weighed on all of her teammates.

“We had really good chemistry all season and just wanted the experience of a playoff game,” she said. “We’re such a young team and this would have been a game that would have given us a big advantage next year. We’re just all really disappointed.”

“We’re a really young team with no seniors and the environment of a playoff game would have been good for us,” she said. “It’s just disappointing to us.”

Holzworth said he did the best that he could to pick up the pieces for the final three games. The season ended with a 46-41 win over Karns City on Wednesday night.

“We played probably our best game of the season Wednesday night and I was proud of my team,” he said. “Your school is telling you that you aren’t good enough to take a shot at winning a playoff game. What signal does that send? These girls get one shot at a basketball career in their lifetimes. I just don’t get it. I really don’t get it.”

Our view | Summarily ousted: Playoff opt-out policy at Wilmington needs to be reviewed

A curious decision made by administrators at Wilmington High School last week has left us shaking our heads.

Betty L. Delaney, 93, of New Castle passed away on July 22, 2020, in the UPMC Family Hospice of Canterbury Place in Pittsburgh. Betty was born on Sept. 12, 1926, in Uniontown, Pennsylvania to the late Asa and Dolly Clark Brant. Betty enjoyed sewing and was a member of the Silver Sneakers. Su…