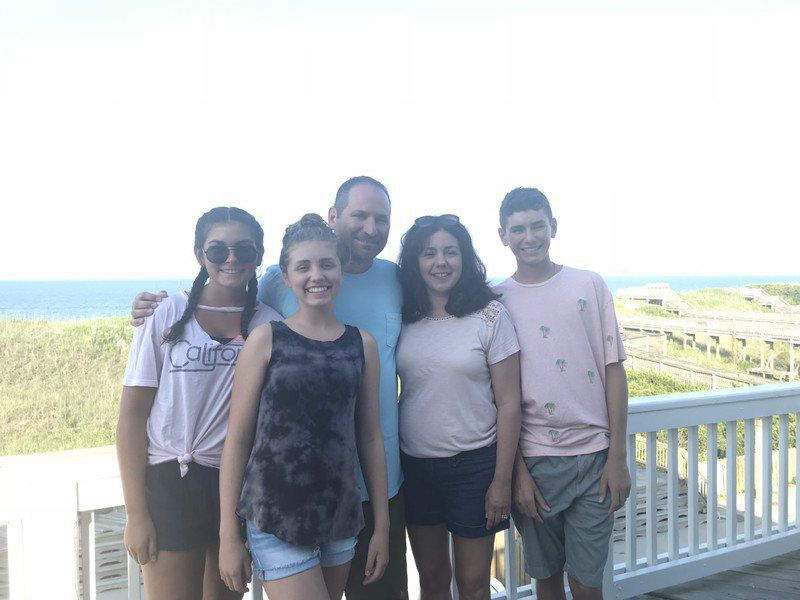 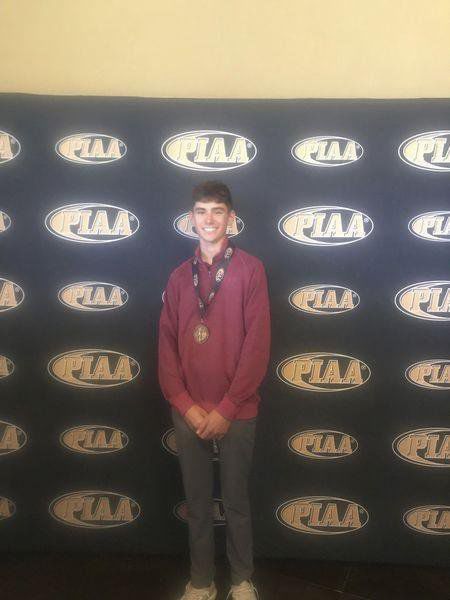 Tommy George with his medal for 10th place in the PIAA Golf Championships. 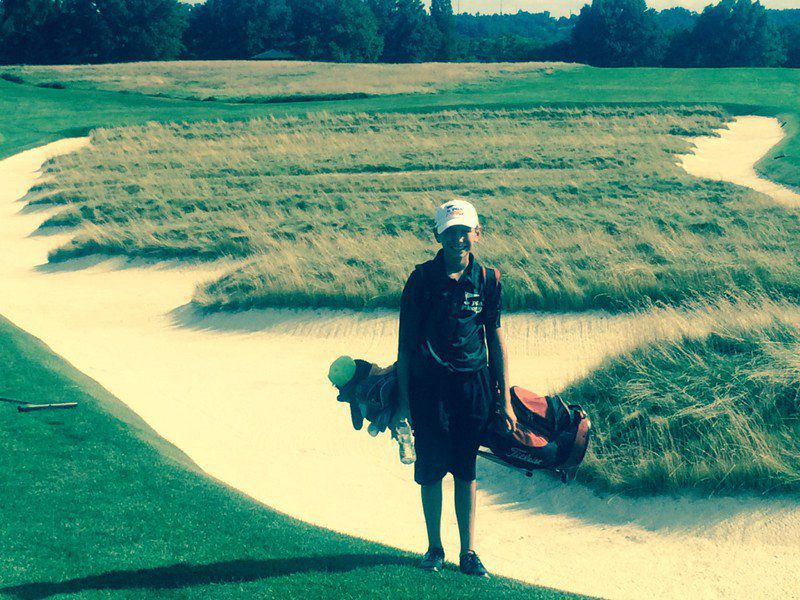 Tommy George with his medal for 10th place in the PIAA Golf Championships.

There has been no shortage of adversity in Tommy George’s life.

So when the Shenango High junior had to make up a significant amount of ground to earn a Top-10 finish at the PIAA Class 2A Golf Championships, he handled it with the composure of a pro.

Today, a shiny medal hangs in George’s bedroom and his status as an all-state golfer is forever a part of the annals of PIAA history.

The Shenango High junior shot 82-78 — 160, skyrocketing into one of the top spots after starting out the second day of play tied for 19th place and completing a personal comeback that has left those around him amazed.

The very fact that George was able to walk 36 holes on the Heritage Hills Golf Resort in York over two days, in fact, was a miracle in itself after he spent over six years of his life barely able to walk at all.

It was September 2007, and Tommy was 4 when he was jumping up and down at home and suffered an injury to his leg. Dad T.J. and mom Mary Beth took him to the emergency room, where he was diagnosed with a microfracture of his leg and a lesion on his right femur. The family made an appointment with late New Castle orthopedic surgeon Dr. Michael Larkin, who sent him on to Children’s Hospital in Pittsburgh, where Dr. Timothy Ward diagnosed Tommy with a large bone cyst.

“We had a choice to have surgery or wait. Dr. Ward determined that the cyst was too close to the growth plate to do surgery on a 4-year-old. We were told not to let Tommy run, jump or fall,” Mary Beth said.

Despite the warnings, a month later, Tommy fell and broke his leg in preschool and ended up in a cast. A thin cortex was said to be the culprit this time around.

In the fall of 2008, shortly after he entered kindergarten, T.J. and Mary Beth took Tommy to Shriner Hospital for Children in Philadelphia, then Johns Hopkins Hospital in Baltimore. Two weeks later, he fell again and shattered his femur in his leg. Next up was a body cast for six weeks, when he could not bend his body at all, then a long-leg cast for four weeks.

“He was in a wheelchair when he was casted,” T.J. said. “He learned to crawl on the floor with his cast to get around at home.”

In January 2009, Tommy was able to undergo surgery since the cyst had grown away from the growth plate. He was in a long-leg cast for another six weeks and then in a brace for spring and summer.

“We tried to focus on the positive, but he was in pain at times and he was so limited from being a kid,” Mary Beth said. “It broke our hearts that he had to go through it.

“In second grade, he was allowed to be a helper in gym,” she added. “He would come home and cry because he couldn’t participate in the same things that his friends did.”

Tommy was told he couldn’t participate in gym or play any competitive sports until Grade 6.

“It was upsetting,” Tommy admitted. “I just wanted to play sports like everybody else.”

“He was there supporting them,” Mary Beth said, “but we could tell it was killing him.”

In the meantime, Tommy found solace in golf.

He hit the links at first with a brace when he was 7 as he golfed with his dad and grandfathers, Tom George and Lou Emery, as well as his uncles Joe George and the late Jason George.

“I wasn’t super competitive at first,” he said, “but I really liked it. It was safe for me.”

He was named an all-star in the PGA Junior travel league at Tam O’Shanter in Hermitage under the tutelage of owner and PGA director John Kerins in both seventh and eighth grade.

Once he realized that golf was something special for Tommy, T.J. put up a net and built his son a putting green in the family’s basement. Tommy spent winter days and nights there, practicing.

“When his friends were asking for Xboxes for Christmas, Tommy asked for a golf simulator,” Mary Beth said with a laugh.

“You never would have known about all the problems with his leg — he never complained and was always out there walking,” Shenango coach John Dado said. “He could have taken a cart or jumped into mine, but he always insisted on walking.”

Then came the trip to the state event.

The Heritage Hills resort has a lighted range on the premises that is open until 10 p.m. and Tommy headed there as soon as his round was completed.

“He didn’t want to eat,” T.J. said. “He just wanted to hit buckets of balls. First he hit two, then he hit two more. We had to pull him off the range to get him to eat something.”

A shotgun start was implemented the second day because of the threat of rain and George started on hole No. 16. He parred his opening hole and proceeded to make an 8 on pesky No. 17.

“I did the same thing I did the first day,” Tommy said. “I pulled my tee shot left into the water. I took a drop and hit again and shanked one and it hit some rocks near No. 3.” Coincidentally, eventual champion Skyler Fox of Riverside, was on the third hole at the time and he gave Tommy a confused look.

“Skyler and I know each other pretty well from the years of playing against each other and he said, ‘what are you doing over here?’ “ Tommy said. “I told him what happened and he said, ‘just get it up and down and you’ll be OK. You got this.’ “

Tommy took his 8, which left him 4-over-par after two holes.

“I wasn’t there with him for his first two holes, but when I saw what happened, I told him, ‘I’m walking with you for the next 16 holes.’ “ Dado said. “We’re either going to be miserable or you’re going to fight through this and get back in this thing.”

He found water again on the next hole, but gutted it out for a 6, which left him at 6-over through three. He bogeyed No. 1 but then reeled off three pars. On No. 5 he made a 25-footer for his par and pars followed on the next two holes as well.

While he hoped he was moving closer to the Top 10, Tommy put it out of his mind and took it hole by hole.

He finished the first nine with eight straight pars, then made three more, including a 50-footer on No. 12.

Tommy returned to the clubhouse as the rains came and learned he was tied for 12th. As more golfers came in, he saw his name move up the leaderboard.

“The rain had started and was coming harder as the last groups came in,” he said. “I thought, it’s raining, nobody’s making birdies. Then I heard I was tied for 10th and I pretty much went crazy.”

T.J., Mary Beth and Emery, who attended the event, joined him on the top of the world.

“I gave him a high five and a hug. I was proud of him,” an emotional T.J. said. “It would have been so easy for him after 17 to just give up but he didn’t. You could see the determination on his face.

“He doesn’t like to talk about his leg and the struggles he’s been through. He says, ‘why do we have to talk about that?’ Golf is the same way. You gotta forget. He forgot about 17. He’s forgotten about his leg, he’s moved on. Next year when we get there again, he’s got to forget about 17.”

Tommy said he is anxious for what is to come in his senior year.

“Next year I want to put myself in (position) to have the best chance I can going to the last nine holes,” he said.

“I don’t think about the bad stuff any more, I just look ahead to the good.”

Dado said it was a joy to watch George’s comeback unfold.

“Tommy is one of the 10 best. Think about what an accomplishment that is. I’m very proud of him.”