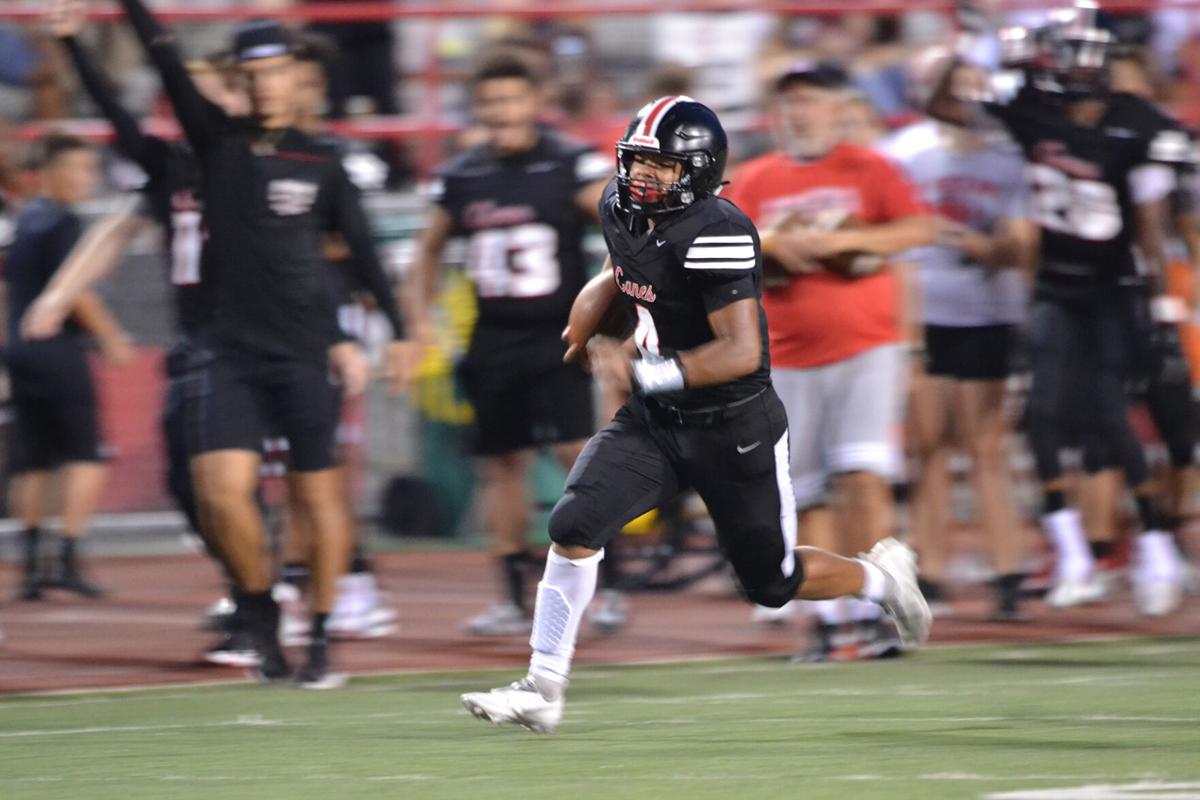 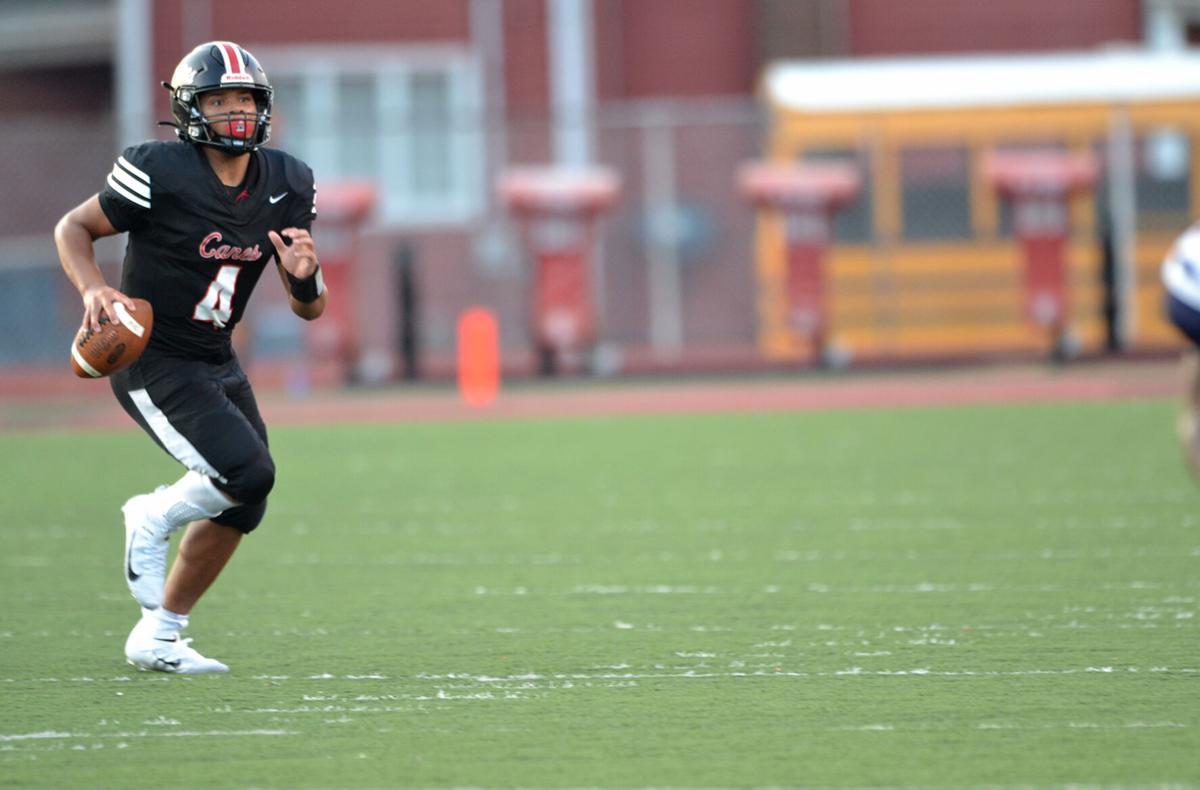 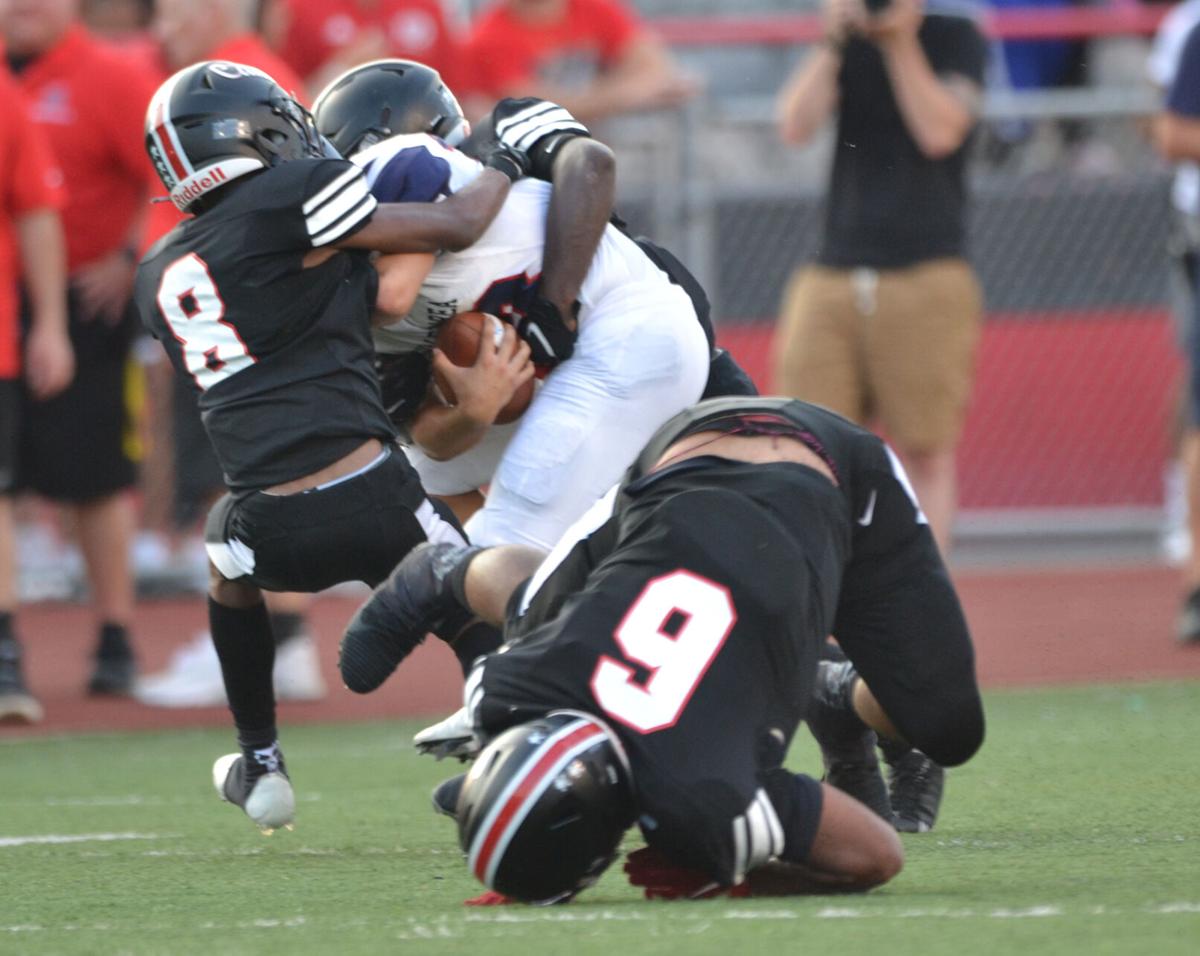 New Castle's Tyler Leekins combines for a tackle during a home game against Shaler. 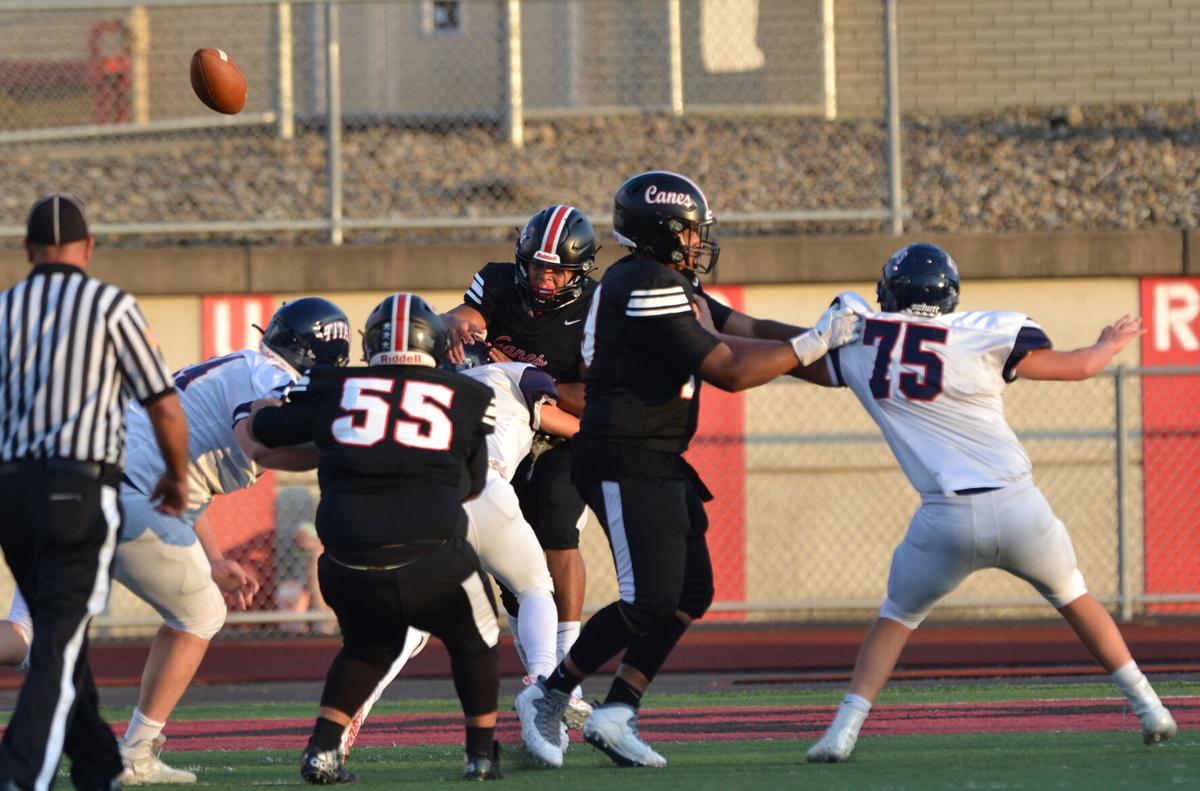 New Castle quarterback Chris Hood is hit as he throws during a home game against Shaler. 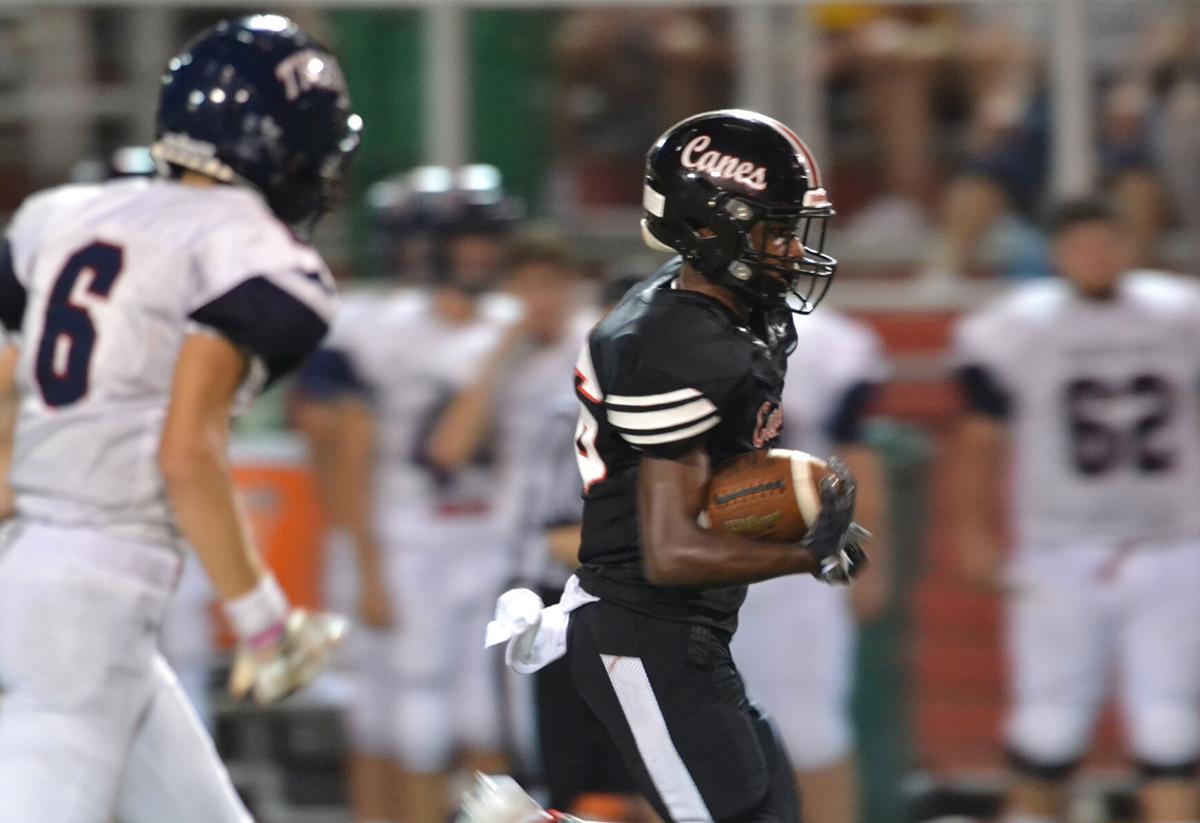 New Castle's Kaevon Gardner runs with the ball during a home game against Shaler. 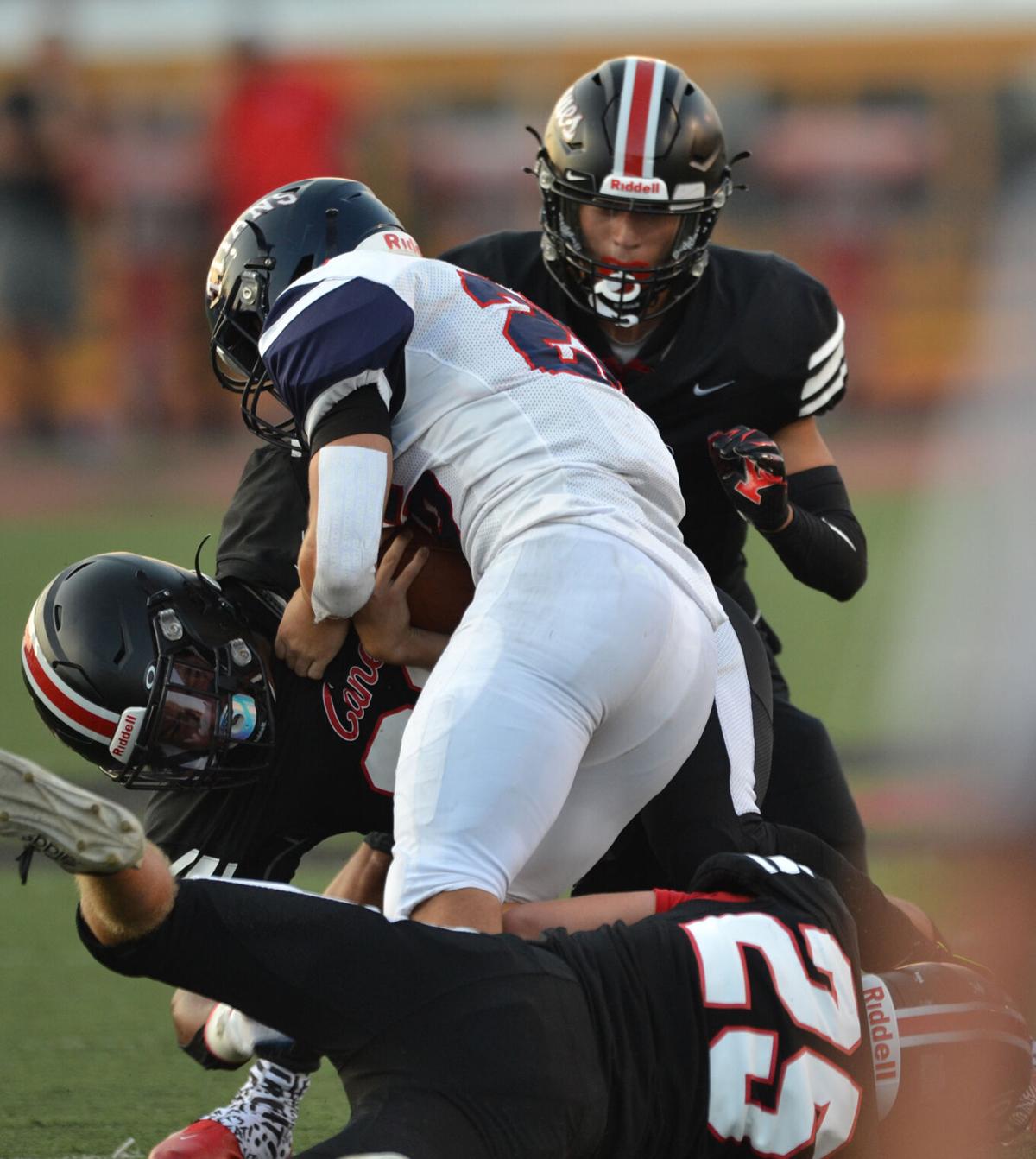 New Castle's Tyler Leekins combines for a tackle during a home game against Shaler.

New Castle quarterback Chris Hood is hit as he throws during a home game against Shaler.

New Castle's Kaevon Gardner runs with the ball during a home game against Shaler.

It certainly wasn't the start the New Castle High football team was looking for as it opened the 2021 season Friday evening.

The Red Hurricane grabbed a 7-0 lead, but Shaler racked up 456 yards of total offense on the way to a 37-20 nonconference victory at Taggart Stadium.

"It was almost like a scrimmage," New Castle coach Joe Cowart. "There was a lot of good and a lot of bad. You have to eliminate the bad and build off the good. I saw some good things, but too many times we shot ourselves in the foot offensively. Defensively, we weren't able to get stops. We've got to get better in all three phases."

New Castle scored on its first possession of the season, as freshman Kaevon Gardner's 8-yard run gave the hosts a 7-0 lead with 3:35 remaining in the opening stanza.

"Unfortunately, Kaevon had a few big runs called back," Cowart said. "He's an explosive player. He gives us an added dimension. We're certainly excited about what he provides us on the offensive side."

The Titans defense got on the scoreboard late in the first quarter, as Augie Tortorea tackled New Castle punter Alex Fox in the end zone for a safety.

Shaler took the lead for good late in the second quarter when quarterback Keegan Smetanka scored on a 3-yard run. Smetanka hit Brandon London with the conversion pass to give the Titans a 10-7 lead with 2:06 remaining in the first half.

The 'Canes were forced to punt on their next possession, and the Titans capitalized right before intermission.

Shaler capped a six-play, 68-yard drive when Smetanka hooked up with Dylan Schlagel on a 15-yard TD pass with 1.5 second to go in the quarter.

"Shaler closed out the first half pretty well on us," Cowart said. "It started with the mistake on special teams with the safety, and then they had back-to-back drives where they kind of built some momentum."

New Castle answered on its first possession of the second half, as quarterback Chris Hood broke free for a 48-yard TD scamper. The kick was no good, but the 'Canes had trimmed the deficit to 17-13 less than two minutes into the third quarter.

"When Shaler got that touchdown right before the half, it gave them some juice, but I thought we answered well," Cowart said.

The Titans used a pair of scoring runs by Tortorea (1 yard, 5 yards) in the stanza to grab a 30-13 lead after three.

Shaler scored its final touchdown early in the fourth quarter as Tortorea hauled in a 15-yard TD pass from Smetanka.

Smetanka, a sophomore, completed 18 of 23 passes for 263 yards and three scores.

"I thought he saw the field really well," Cowart said of Smetanka. "He made some nice throws to guys when we were covering them. He found his guys."

The 'Canes closed out the scoring with 7:59 to go in the game on a 5-yard run by Hood, who finished with a game-high 82 yards rushing on 13 carries. The senior signal caller also completed 13 of 23 passes for 147 yards. He was picked off once.

"Chris played well," Cowart said. "We have to shore up some things in the pass protection. Chris did a great job of leading the troops. He keeps getting better and better. We certainly have some things to build off of."

Shawn Fox is a freelance sports writer for the New Castle News. Follow him on Twitter at twitter.com/foxparaitis.