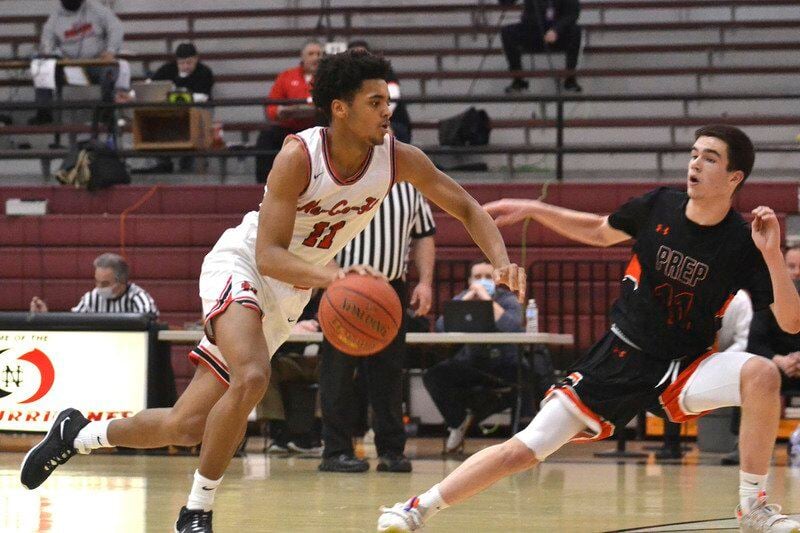 New Castle's Sheldon Cox dribbles by a defender during a PIAA playoff game against Cathedral Prep. 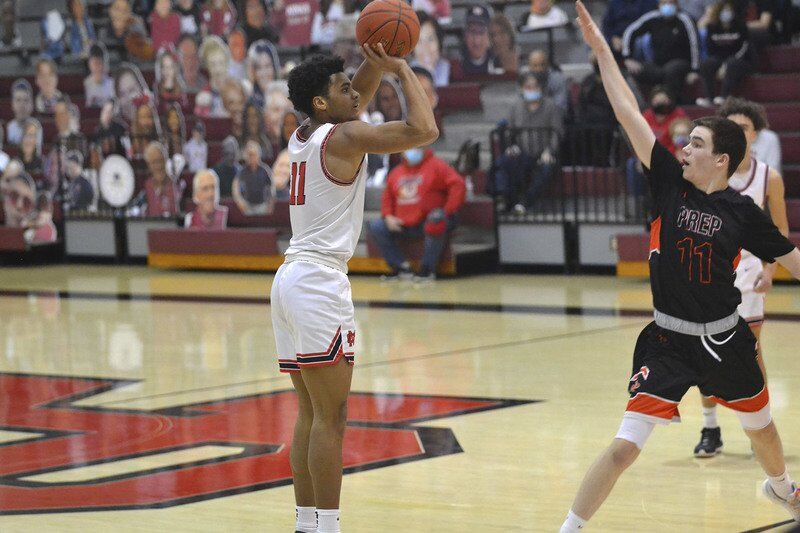 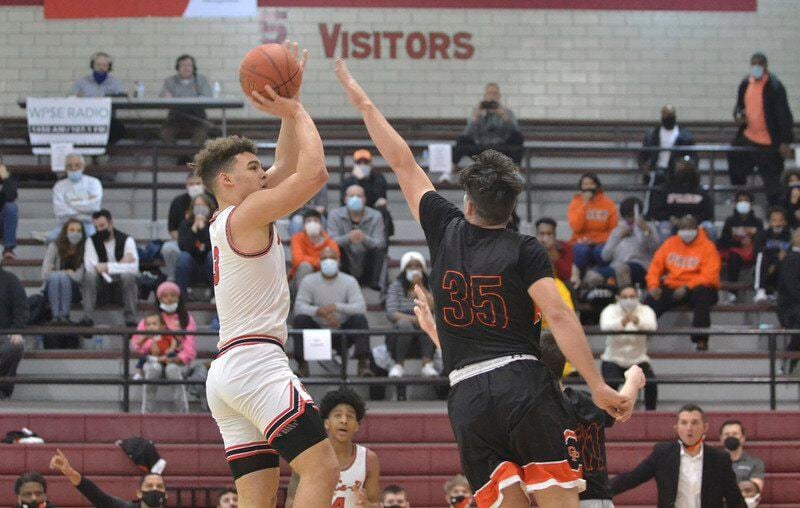 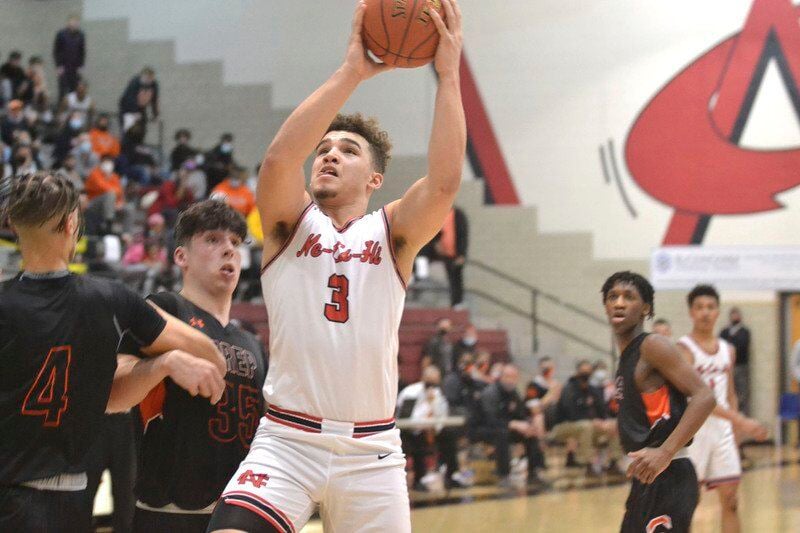 New Castle's Michael Wells drives for a layup during a PIAA playoff game against Cathedral Prep.

New Castle's Sheldon Cox dribbles by a defender during a PIAA playoff game against Cathedral Prep.

New Castle's Michael Wells drives for a layup during a PIAA playoff game against Cathedral Prep.

The Red Hurricane watched Erie Cathedral Prep erase a seven-point deficit in the final 1:34 of regulation and pull out a 52-50 overtime victory at the Ne-Ca-Hi Field House in PIAA Class 5A quarterfinal action.

“They are a really, really good team,” Cathedral Prep coach Steve Piotrowicz said. “We knew we had to keep them off the 3-point line. I think they struggled with our pace of play a little bit. But, I have so much respect for Coach Ralph (Blundo) and his program. Our kids just wanted it. They don’t want to stop playing basketball right now. Whether they are up or they are down, they settle in, figure out they have to execute and they make plays at the right time.”

New Castle’s season ends at 21-3. The ’Canes were coming off the program’s 14th WPIAL championship and seventh in 11 years, but struggled with this matchup.

“I thought we had three good days of practice. What we didn’t do well tonight; you can attribute to Cathedral Prep — not us. We did some good things. I’ve seen better Prep teams than that. But, that’s a gritty, tough team. The coach has done a very good job with the kids that he has,” Blundo said. “We thought the game would be a dogfight just like this. They handle the ball well enough that you’re not going to turn them over a ton. We tried to pressure them a couple times and they got a couple easy ones to start the second half. Their on-ball defense was pretty good and they stayed in front pretty well.”

The Ramblers (17-7), the District 10 champs, meet Lower Dauphin, a 71-46 winner over Central Mountain, in Monday’s semifinals.

“This is huge,” Piotrowicz said. “Anytime you can represent for Prep and the Erie community and you’re one win away from getting a state title chance, it means everything.”

New Castle, playing its 17th game of the season on its home floor, spent most of the game chasing the Ramblers. The ’Canes caught them late in the third and pulled ahead in the fourth quarter. Sheldon Cox’s bucket gave the hosts a 39-37 edge with 4:56 to go. He added another basket and free throw and Michael Wells converted a bucket for a 44-37 lead with 1:34 left in regulation.

However, Cathedral Prep got a spark when Will Innes drained a 3-pointer with 1:24 to go. New Castle turned the ball over and Innes scored to make it a 44-42 game with 30.5 seconds left. A ’Canes turnover with 21.1 seconds on the clock gave the Ramblers new life. Liam Galla’s bucket tied it at 44-all with 3.1 seconds on the clock.

“The kids just buckled in. Earlier in the year, I would have seen panic in their eyes. But, I didn’t see that tonight. They had that look in their eyes that they knew they could get a couple more stops,” Piotrowicz said. “Luckily, New Castle turned the ball over a couple times and that gave us an advantage of making it a two-point game and we were able to finish in the end of regulation and get to overtime.”

The Ramblers got a break with 54.4 seconds remaining. Wells was whistled for an intentional foul when he became tied up with a Ramblers player while battling for a loose ball on the floor. Innes swished one of two free throws for a 51-50 edge.

“I didn’t think it was a good call, but I don’t make those decisions. I can’t control that,” Blundo said. “I felt like, in a game like this, you don’t make that call. But, the ref explained it to me that he thought it was the right call and we don’t have a choice but to live with it. He makes those decisions — not us.”

Cathedral Prep had the crucial next possession, too, and Galla was fouled. He split a pair of free throws with 21.8 seconds to go for a 52-50 advantage.

New Castle had two chances to take the lead or tie the game. Isaiah Boice’s trey missed the mark with just under 10 seconds on the clock. After the Ramblers’ Tavion Spencer got the rebound and was fouled, he missed two free throws with 6.3 seconds remaining. The ’Canes had another opportunity when Wells took a pass and charged to the hoop, but his runner clanged off the iron. New Castle’s Michael Graham got the rebound and his putback went in the hoop, but the horn sounded before he unleashed the shot.

“He had a head of steam and got to the cup,” Blundo said. “As soon as that ball was on the rim, we told our other four guys to crash the net and see if we could get a tip-in. We did, but it was just half a second late.”

The ’Canes lose two starters to graduation in Donny Cade and Cox.

“Donny Cade, watching him grow and come out of his shell as a young man was great. He was a great teammate. Sheldon Cox has the best soul, I think, of any kid I’ve ever coached. He is just a good, good young man,” Blundo said. “I just want them to know that, the way we are there for those young men today, we’ll be there for them tomorrow and five, 10 and 20 years down the road. Nothing changes. The capacity by which we’ll support them will always be the same.”