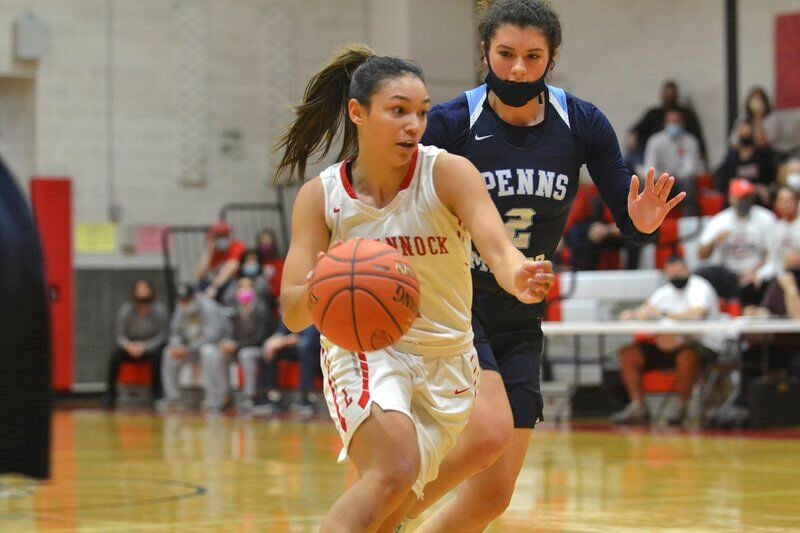 Neshannock's Neleh Nogay, shown here dribbling against Penns Manor, will look to lead her team to a PIAA Class 2A championship. 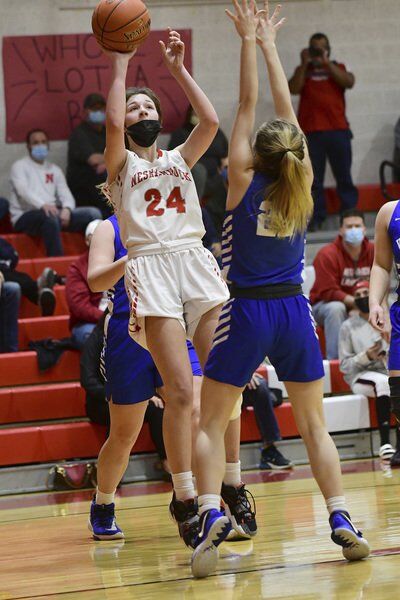 Neshannock's Neleh Nogay, shown here dribbling against Penns Manor, will look to lead her team to a PIAA Class 2A championship.

But in her 41st season as a head coach, she finally will make the trip to Hershey to coach a state championship game.

The Lady Lancers (19-2) clinched their first appearance in the PIAA championship with a 39-36 overtime victory over Penns Manor. Neshannock will meet Mount Carmel, a 52-33 victor over Mahanoy, at noon in the Class 2A championship game Thursday at Hershey’s GIANT Center.

“There are no words. I don’t even know what to say. I couldn’t even believe it after the game,” Grybowski said of the thought of coaching in a state championship game. “There are a million things going through your head.

“I’m happy for this group, for the crazy year we had. There were games we were behind and we kept pulling it out. We’ve had injuries and adversities. It’s amazing that we’re the last team standing in the west (in Class 2A).”

Mairan Haggerty, Aaralyn Nogay, Hunter Newman, Avi DeLillo and Marissa Austin have all dealt with injuries or are dealing with injuries for the Lady Lancers. Newman had a shoulder injury that she came back from. But she won’t play in the state championship after suffering a wrist injury in the PIAA quarterfinals. DeLillo is out with a torn anterior cruciate ligament (ACL) suffered in the team’s first scrimmage.

Haggerty, Nogay and Austin are available for the title tilt.

“It’s really been a little bit of everything,” Grybowski said of the injuries. “It’s more than any of the teams I have dealt with the in past.”

“It’s extremely difficult to get a team to this stage of the playoffs,” she said. “There have been teams at New Castle that I coached that I thought were better teams by far.

“But, we would get through the WPIAL playoffs and then two games in the state playoffs and hit a roadblock. It has to be a perfect storm. It has to be in your favor. This year, playing playoff games at home made it more comfortable. It’s been really great not having to go for an hour or two in a bus.”

Neshannock, which won its second WPIAL crown in the last three years earlier this month, doesn’t have a senior on the roster. In fact, the Lady Lancers have just two juniors — Neleh Nogay and Addi Watts.

“They are two amazing kids,” Grybowski said of Neleh Nogay and Watts. “Neleh has been a starter since ninth grade. She controls every part of the game form the point guard position. Everything we do goes through her. Defensively, she is the catalyst.

“Addi Watts is one of the toughest kids I’ve coached. She always draws the toughest player on the other team. Both girls lead by example. Both are at the top of their class academically. They certainly keep others in check. They don’t get too high or too low; they’re great to watch.”

Carline Fletcher and Mia Chapman scored 10 points each for Mount Carmel in that game. Dani Rae Renno netted seven of her nine points in the first quarter for the winners.

It will be the first trip to the state championship game for both programs.

“They’re a good basketball team,” Grybowski said. “We have to deal with a 6-footer (Renno) that is averaging 20 points a game. She’s a nice player.

“They have an experienced point guard (Lauren Ayres), she does a nice job for them. They have a couple kids that can shoot the 3. It’s going to be a tall task for us.”

Last year, the Lady Lancers missed the playoffs by a game. They finished a game behind fourth-place finisher Freedom. The previous year, Neshannock won the program’s first WPIAL championship.

“This is a totally different group,” Grybowski said of this year’s team with last year’s squad. “We have a good mixture of young kids with a mix of varsity experience.

“They worked hard in the summer, doing drills and skills. They didn’t get to go anywhere and play. We got better each and every day and they bought in to the system. Defensively, we’re doing what we do best. Winning breeds success. It also makes the team believe and be more positive. That all helps. They truly do care and cheer for each other. It’s a true team and they don’t care who scores. It hasn’t only been two scorers. It’s been a team effort every game.”

Grybowski noted her team needs to keep things simple to finish the season with one more victory.

“We’re not going to change anything at this point. We need to play good defense and take care of the basketball,” Grybowski said. “It will start with our pressure. We have to run our sets and set good screens.

“We’re going to have to execute and contain the big kid. If we can keep her contained, keep her around 12 points, then I know we did our job. We have to execute offensively, continue to play pressure defense; just get out there and have fun. If we play our game, we have every chance to walk away as champions.”