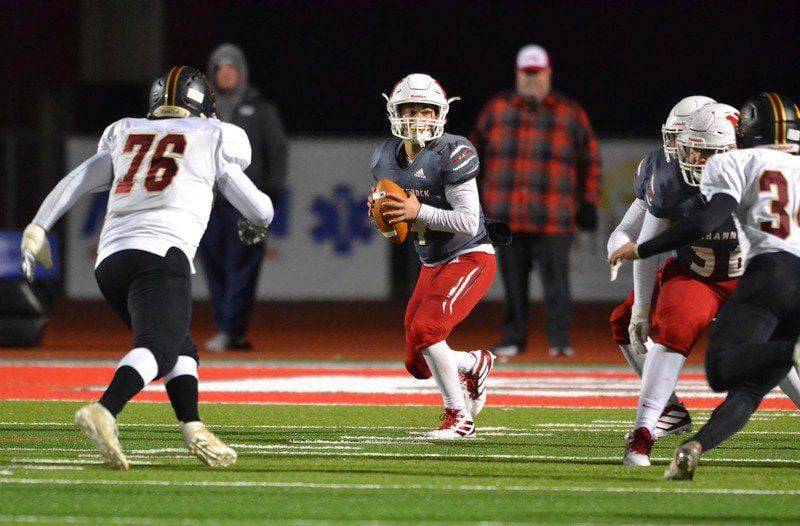 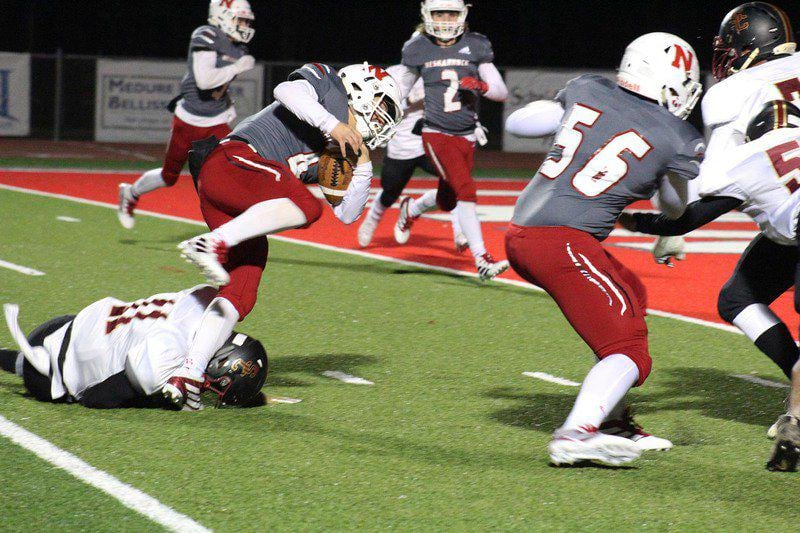 Neshannock's Jason Nativio is tackled on his way to the end zone during the first half of a home playoff game against Serra Catholic.

Neshannock's Jason Nativio is tackled on his way to the end zone during the first half of a home playoff game against Serra Catholic.

Jason Nativio delivered throughout the regular season for the Neshannock High football team.

Friday night was no different as the WPIAL Class 2A playoffs opened.

Nativio, a 5-foot-7, 180-pound senior quarterback/defensive back, helped guide the Lancers to a 31-13 first-round playoff win over Serra Catholic at Bob Bleggi Stadium.

He rushed for 49 yards on nine carries with a touchdown, while going 7 of 15 through the air for 206 yards with two touchdowns and no interceptions. He had a scoring run of six yards, while throwing an 88-yard touchdown to Ethan Weatherby and a 38-yard scoring strike to Cam’ron Owens.

“When we need a play with his feet or through the air, he always comes up with that big play for us. Whether it’s breaking a tackle, or third-and-four and he gets hit a couple yards away from the first down and he breaks away to get the first down. He always makes the big play when the ball is in his hands. He was really big for us Friday.”

For his efforts, Nativio was named Lawrence County’s athlete of the week as voted on by the New Castle News sports staff.

Neshannock (9-2) will battle Brentwood (9-2) in the WPIAL Class 2A quarterfinals at 7 p.m. Friday at Freedom High School.

Nativio is 48 of 114 through the air for 930 yards with seven touchdowns and two interceptions on the season. He has rushed for 352 yards on 88 carries with nine touchdowns.

“Jason is the leader out there,” Mozzocio said. “When he’s under center for us, we’re a different football team; we play with a different motor behind us.

“He’s the key to the ignition. One thing about Jason, he may not be very loud vocally, but what he is is a courageous leader. He will give everything he has and our kids feed off that.”

Neshannock defeated Riverside in the second game of the year, 54-34, at home. In that game, Nativio played the whole game, but he wasn’t healthy the whole time. Nativio broke a bone in his leg, but insisted he was fine and gutted it out, throwing for 208 yards and a pair of scores with no interceptions.

“Early on, Jason took a hit on his leg and he was limping around,” Mozzocio said. “He told us he’s fine and everyone assumed it was a slight sprain.

“Jason got X-rays and found out he had a broken bone in his leg. It was pretty remarkable. He had to be in quite a bit of pain. When he came back, he wasn’t 100 percent, but he wanted to be out there and playing.”

Nativio, a son of Jason and Jennifer Nativio, missed three games because of the injury. Mozzocio was a coach on the Shenango football staff in the late 1980s, coaching Jason’s dad Jason. The elder Jason Nativio was a tight end and inside linebacker for the Wildcats.

“It’s great to get those bloodlines on our team,” Mozzocio said.

Mozzocio said the younger Jason Nativio is interested in continuing his football career at the collegiate level.

“I’ve had a few phone calls from people interested in Jason,” Mozzocio said. “He’s a football player and he likes to compete. Wherever he goes, I’m sure he’ll find his niche and be able to help somebody.”