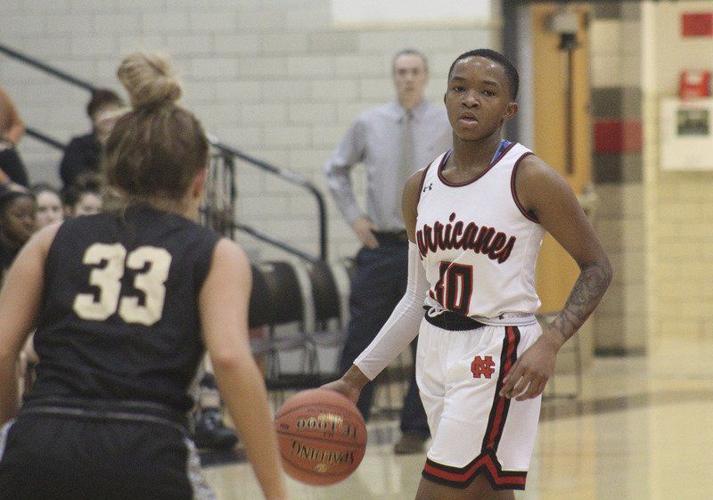 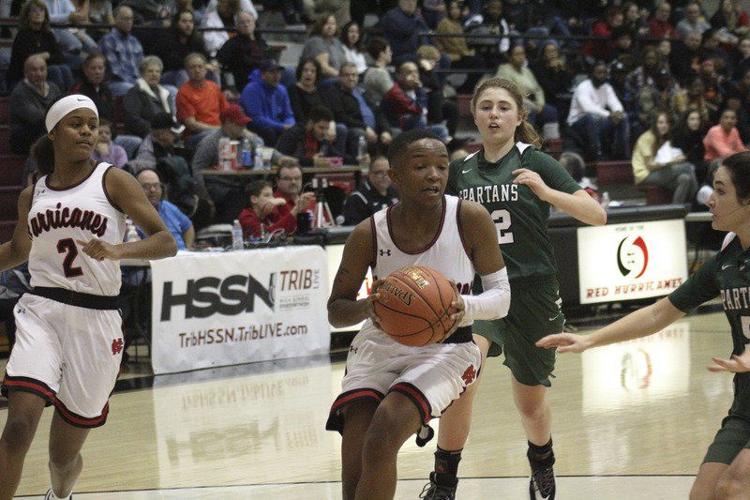 New Castle's Aayanni Hudson drives to the basket against Laurel earlier this season.

New Castle's Aayanni Hudson drives to the basket against Laurel earlier this season.

But only for a moment.

“She’s one of these people who succeeds in whatever she does, so I figured why not,” DiNardo-Joseph said. “And of course she killed it.”

Like her rendition of the National Anthem which brought the house down at the Ne-Ca-Hi Field House, the Lady ‘Canes’ 5-foot-7 sophomore guard has been making sweet music on the basketball court as well.

In three games last week, she scored 80 points, an average of 26.6 points per game. She dropped in 25 points and had 10 rebounds and three assists in a 67-55 loss to Central Valley that actually clinched the first playoff spot for the Lady ‘Canes since the 2011-12 season. She added 19 points and three steals in a 65-30 section rout of Ambridge and 36 points, nine rebounds, five assists and three steals in a 77-70 nonleague victory over Farrell.

For her efforts, Hudson has been named Lawrence County’s athlete of the week by the New Castle News sports staff.

DiNardo-Joseph said she knew from first seeing Hudson on the court that she was a player to watch.

“When she was in seventh grade, you could just tell that she was going to be something special,” DiNardo-Joseph said. “You can usually tell when a player is going to be good, but there was just something about Aayanni that stood out.

“She’s just one of these people who has a light about her all of the time. She’s that person that everyone wants to be around.”

Hudson, however, has not gotten to this point without major heartache.

Her father, Fletcher Hudson Jr. died in a house fire in New Castle on Dec. 29, 2018. Aayanni was one of seven daughters and two sons he left behind.

“They had really bonded over basketball,” DiNardo-Joseph said. “She really misses him, but she has kept on pushing and striving to be better so he would be proud of her.”

Hudson, who also is a daughter of Stephanie Reeves, is only going to improve with time, according to her coach.

“She’s young and I think she will continue to get better,” DiNardo-Joseph said. “She’s so coachable and if she makes a mistake, she’s the first one to blame herself.

“Then she asks how she can make sure she doesn’t make the same mistake the next time.”

The Lady ‘Canes, currently 6-5 in WPIAL Section 2-4A and 13-8 overall, are looking forward to seeing what they can do in the postseason.

“This team feeds off her,” DiNardo-Joseph said. “She makes our team better just as they make her better.”

John (Karl) Menges, 69, of New Castle, passed away at his residence on May 18, 2022. Full obituary to be announced at a later date, by the Noga Funeral Home, Inc., New Castle, Pennsylvania.

On May 10, 2022, Rick Stastny aged 78, of Shenango Township, passed away after an unexpected illness. He was the son of the late Joseph and Virginia Stastny (Stiborski). Rick was born and raised in the Chicago area but didn't really begin to live life until early 1963 when he met Monica whil…