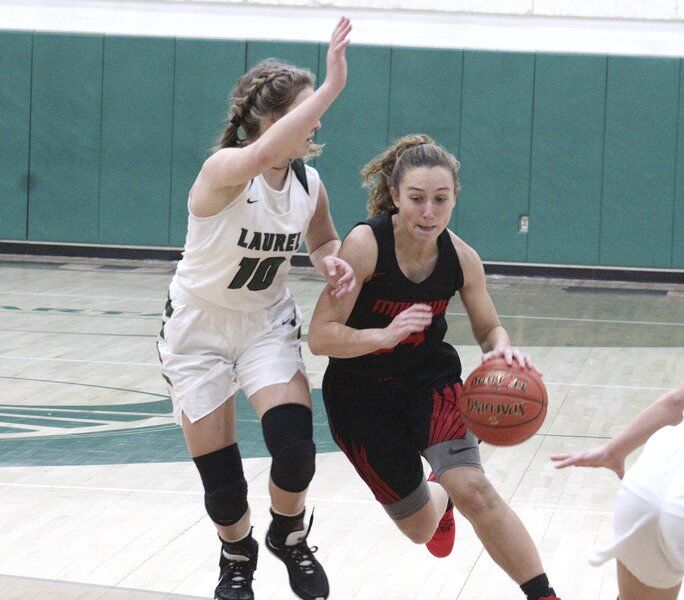 Mohawk's Nadia Lape, left, shown here driving to the basket against Laurel's Regan Atkins earlier in the season, has been one of the key contributors to the team's push toward a state title. 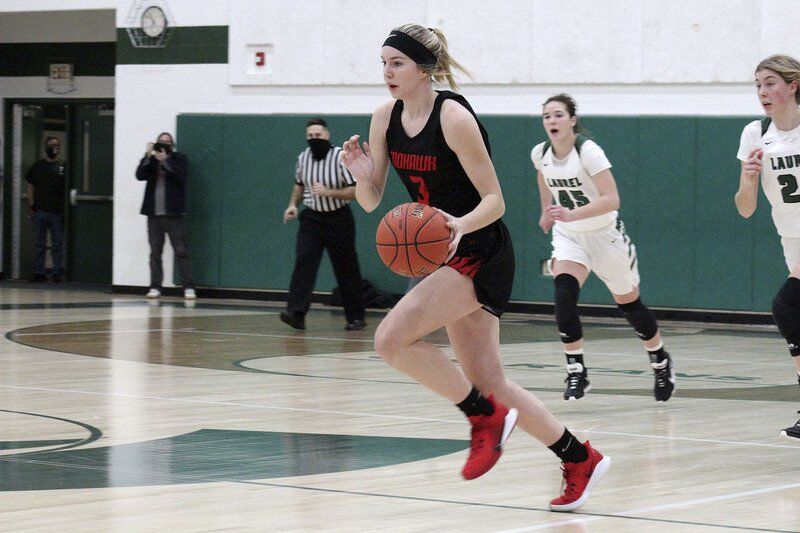 Mohawk's Jordan Radzyminski, shown here bringing the ball up the floor against Laurel earlier in the year, is a pivotal piece to the team's success.

Mohawk's Nadia Lape, left, shown here driving to the basket against Laurel's Regan Atkins earlier in the season, has been one of the key contributors to the team's push toward a state title.

Mohawk's Jordan Radzyminski, shown here bringing the ball up the floor against Laurel earlier in the year, is a pivotal piece to the team's success.

Last year, COVID-19 shut down the PIAA basketball playoffs prior to the quarterfinals.

Fast forward one year. Not even a pandemic could prevent the Lady Warriors from reaching the PIAA Class 3A championship game.

Mohawk (19-4) will meet Philadelphia West Catholic (10-4) at 5 p.m. Thursday at Hershey’s GIANT Center. The Lady Warriors advanced to their first state championship game with a 74-58 win over Forest Hills on Monday.

“Everybody is excited at Mohawk,” said Lady Warriors coach Mike O’Lare, who is 229-126 in 15 seasons as the team’s coach. “The kids are excited. The community is excited. We can’t do any better than be where we are at right now.”

“I felt, personally, our goal as a staff, that we could control some of it and not all of it,” he said. “Just to get our seniors to go out on their own is big.

“Just being able to take their jersey off and know it’s over, versus what they had to endure last year. The kids will have the opportunity of a lifetime (on Thursday) being on the floor and not being quarantined.”

Philadelphia West Catholic reached the championship game with a 59-33 decision over Notre Dame Green Pond. The Lady Burrs, the District 12 champs, were led by Virginia Tech recruit Destiney McPhaul with 27 points and 10 rebounds in the semifinal win. West Catholic led that game 40-10 at the half.

Mohawk took third place in the WPIAL Section 1-3A standings at 7-3 this season, behind champion North Catholic and second-place Laurel. The Lady Warriors, though, received the No. 2 seed in the district playoffs. Mohawk eventually knocked off the Trojanettes, who won both regular-season matchups, for the WPIAL crown. It was the Lady Warriors’ second consecutive WPIAL title.

“I don’t believe there was any added pressure on us this year. I never felt that with this team,” O’Lare said. “Our goal wasn’t to defend or repeat. Our goal was to get better.

“I believe because of the COVID situation, that pressure wasn’t as intense had we not gone through that. A lot of last year became last year. We had to go through a season 100 percent differently than we did last year. I felt like we did it, we’re still here and playing. It’s a unique situation they won’t forget.”

Seniors Paige Julian, Nadia Lape and Hannah McDanel have been the catalysts for Mohawk advancing to the championship game. Julian will continue her basketball career at West Liberty. Lape will compete in track and field at Army, while McDanel will run track at Robert Morris. Lape and Julian went over 1,000 career points this season.

The trio was instrumental in the team’s semifinal win over Forest Hills. McDanel scored a game-high 24 points for Mohawk in the win, while Lape contributed 22 markers and Julian added 21.

Julian, Lape and McDanel contribute 48.8 points a game for Mohawk. Julian paves the way at 19.6 markers a matchup.

“For those kids to be able to take this program to where they have is special,” O’Lare said. “They were the right kids at the right time to elevate the program.

“To go back-to-back as a WPIAL champion is a kid’s dream. I’m proud of all five of my seniors.”

O’Lare isn’t going to make changes in the final game of the year. He’s keeping his approach consistent.

“Just stay the same. We just have to defend the best we ever have,” O’Lare said. “We’ll have to play good defense. We’ll have to adjust to what they do. We’re just going to have to believe in what we do.

“You don’t want to over-coach this. We’re not going to go out there and not let them do things. This is special, we’ll enjoy everything we can. It’s going to be an awesome experience.”

The Lady Warriors are the fourth-highest scoring team around the WPIAL in girls basketball, regardless of classification. Mohawk averages 62.7 points a game. Trinity (67.5), Chartiers Valley (64.2) and Rochester (63.9) average more markers a matchup than the Lady Warriors. However, only Chartiers Valley (Class 5A) among those three schools will play for a state title.