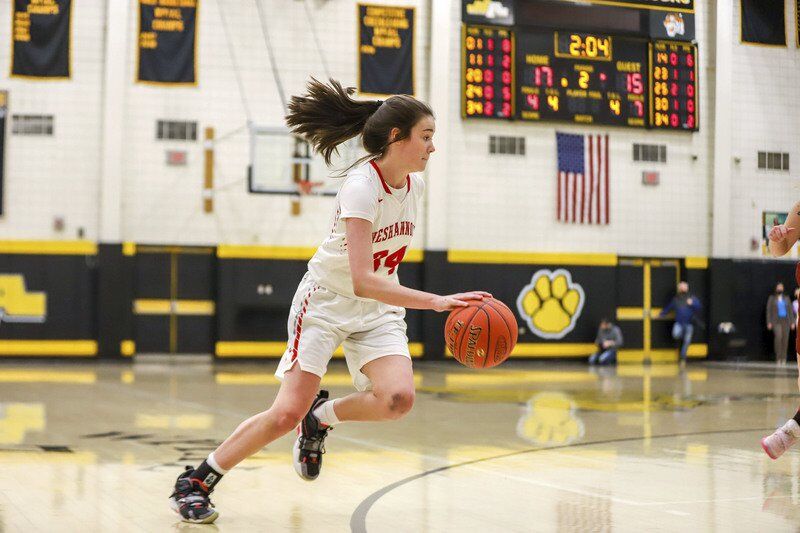 Neshannock’s Mairan Haggerty dribbles toward the basket during a WPIAL championship game against Serra Catholic. 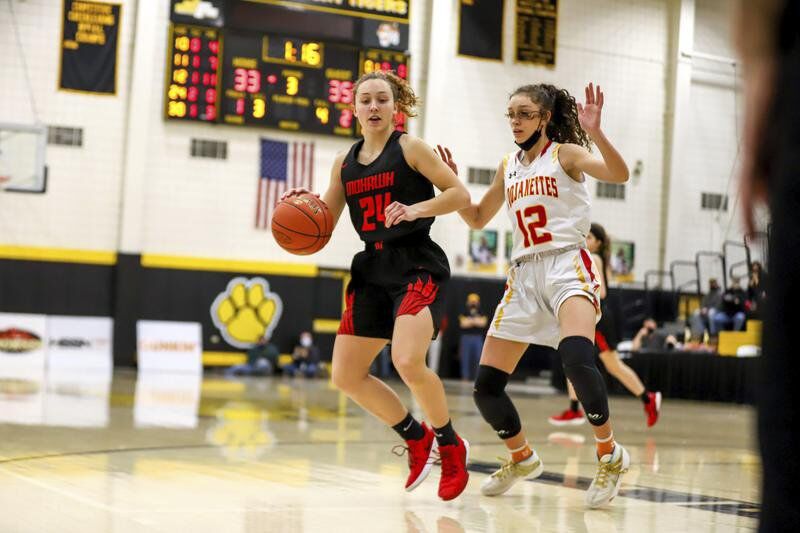 Neshannock’s Mairan Haggerty dribbles toward the basket during a WPIAL championship game against Serra Catholic.

The Mohawk High and Neshannock High girls basketball teams are set to begin a quest to capture a PIAA crown. It would be the first state title for both schools.

The Lady Warriors (17-4) are coming off a 54-48 win over North Catholic in the WPIAL Class 3A championship game, their second consecutive district crown. Mohawk lost both games to the Trojanettes in Section 1 action, 54-38, and 58-49, prior to avenging those setbacks and repeating as district champs.

The Lady Lancers (17-2) won their second WPIAL championship in the last three seasons with a 54-44 verdict over Serra Catholic in Class 2A.

The Lady Warriors will entertain the Lady Chucks at 6:30 p.m. Friday in a PIAA Class 3A quarterfinal matchup.

Punxsutawney (19-0) advanced with a 72-38 decision over District 5 champ Everett in the first round of the state playoffs. The Lady Chucks are the District 9 champions.

“We’re going to have our hands full for sure,” Mohawk coach Mike O’Lare said. “I feel like we play in one of the toughest sections in the state.

“Having to play a really good team, we’ve been tested throughout the year. We’ve been battle tested.”

O’Lare sees similarities between his squad and Punxsutawney.

“Basically they play with five guards out on the floor,” he said. “They like to shoot the 3 as well.

“They’re very similar to what we do, but their style is different. With the personnel, you’ll see 10 guards out on the court and it will be a fast game.”

Last year, the Lady Warriors were set to play Cambria Heights in the quarterfinals. But COVID-19 shut down the season without champions being crowned.

“Kids are kids. The best part of kids is they don’t have a longterm memory,” O’Lare said. “They know about last year. They remember it. But each day is a new day for them.

“They’re excited to be playing. That’s what we wanted, to be able to walk off the court. We’re where we were at last year. Last year, we left the gym and we didn’t know if we would play again. And we didn’t. I think we’re dealing with it on a different level.”

“We did a good job last year refocusing on the state playoffs,” O’Lare said. “That’s the benefit of having an older team. We went through this last year.

“We’re picking up almost where we left off last year. When you’re coaching older kids and knowing how to get on to the next step, it’s a plus. We should be ready to go.”

Mohawk also has had the luxury of playing at home a great deal lately. The Lady Warriors have left their gym just twice — at Beaver Falls on Feb. 18 and the WPIAL championship at North Allegheny on March 13 — in the last month.

“That comfort level and not getting on the bus for an hour-and-a-half is big. Playing at home, the kids can go home, get a bite to eat and come back to the school, like it’s a normal regular-season game.”

The Lady Lancers will host the Lady Ramblers (20-1) at 6:30 p.m. Friday in a PIAA Class 2A quarterfinal contest.

Windber, the District 5 champion, moved on with a 53-37 victory over District 9 champ Keystone. The Lady Ramblers’ win was their first in program history in the state playoffs. And they did it on Keystone’s home floor.

Neshannock is looking to avoid being Windber’s second state road playoff victory in as many games.

“I just told the kids, it’s been such a crazy year. But it’s special in that way,” Lady Lancers coach Luann Grybowski said of hosting a state playoff game.

“They may never have that opportunity again. It was great to have the WPIAL playoffs at home. But to have the state playoffs at home rather than at a neutral site is such a great benefit. We don’t have to ride a bus. In years past, we were on a bus for two, three or four hours. This is a special time. They need to relish it and realize the opportunity that lies ahead.”

Grybowski pointed out the state playoff landscape has a different look this year.

“Everybody that you’re playing now is a No. 1 seed,” she said. “There’s no more 3s, 4s or 6s out there. Only champions moved on and everyone will bring their ‘A’ game.

“It will be a tough matchup for us. They have a 6-footer in the post and another post player, too. Their point guard Samantha Toki is good and another guard Gina Gaye makes them go. She attacks, she shoots the 3. She rebounds, she posts up. We’ll have to play strong, sound, fundamental defense and limit them to one shot.”