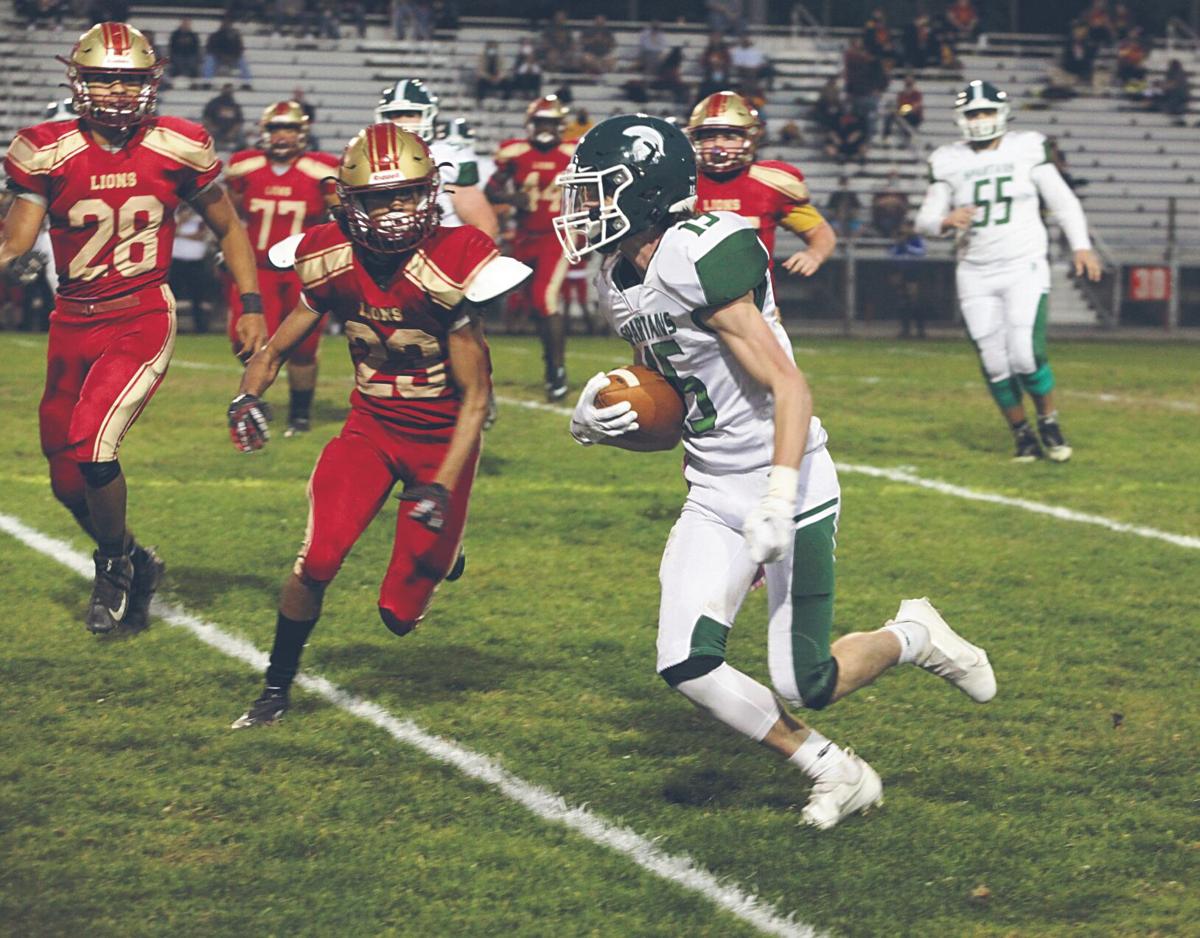 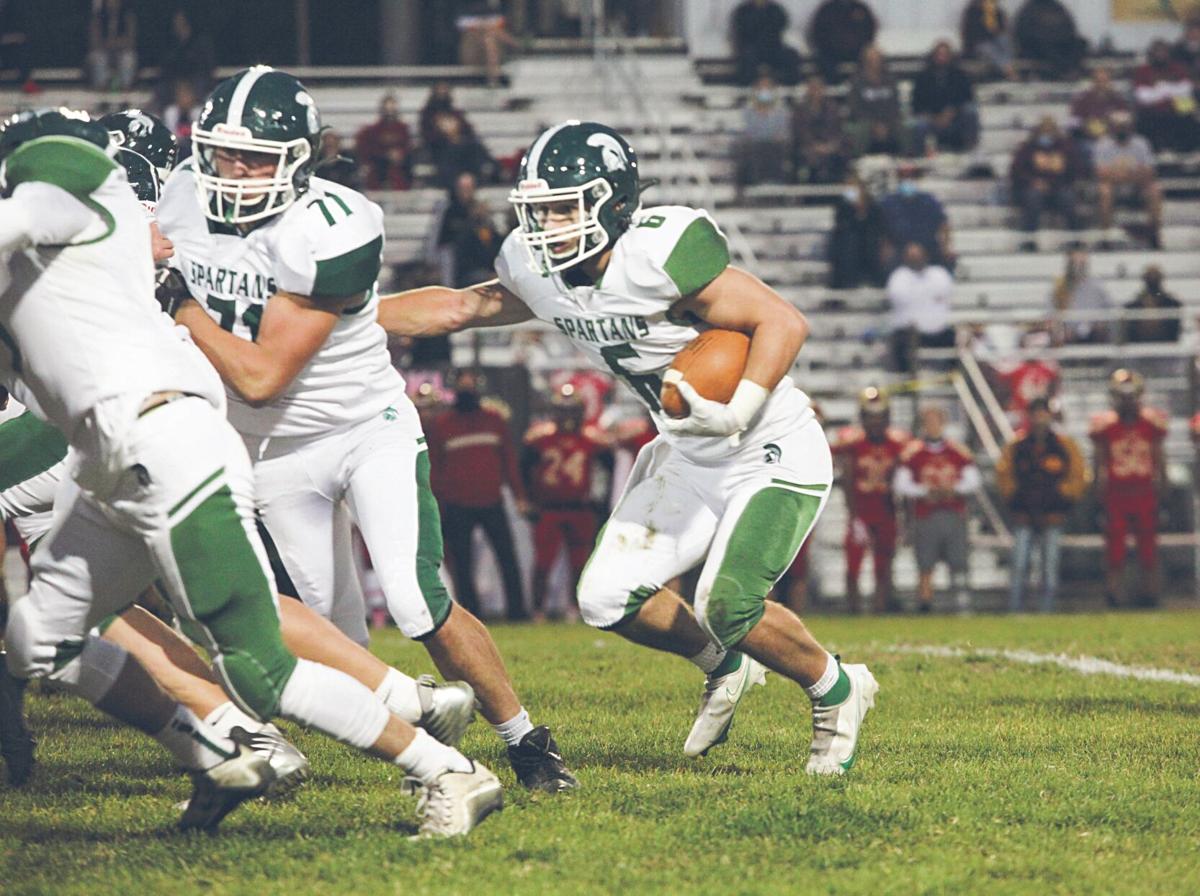 NEW BRIGHTON — Things got a lot more interesting in the WPIAL Class 2A Midwestern Conference on Friday night.

The Laurel High football team made sure of that.

The Spartans opened up a 21-7 lead midway through the second quarter and held off a New Brighton rally to hand the Lions their second conference loss, 27-25, at Oak Hill Field.

“It was a great win,” Laurel junior Luke McCoy said. “New Brighton is a great team. We didn’t play like ourselves last week, but we really came together as a team tonight.”

Both Laurel and New Brighton sit at 3-2 overall and in the conference. Beaver Falls leads the Midwestern at 5-0, followed by Neshannock at 4-1. Freedom, which is 2-2, hosts Ellwood City Lincoln this evening.

“It was an unbelievable game,” Laurel coach Brian Cooper said. “It was a big win for us. Offensively we were able to move the football. I thought we did a great job up front and our backs ran hard. We made the plays when we needed to.”

The Spartans took the opening kickoff and marched 80 yards in 11 plays — all on the ground — to grab a 7-0 lead. Michael Pasquarello polished off the drive with a 7-yard touchdown run at the 5:45 mark.

After forcing the Lions to punt on their first possession, Laurel again found the end zone, this time on a 69-yard TD run by McCoy. Kobe DeRosa’s kick gave the Spartans a 14-0 edge with 4:33 remaining in the opening quarter.

“I saw a hole, made one cut and just saw pure green,” McCoy said.

“Honestly, I thought we moved the ball well all night other than one drive,” Cooper said. “We did a great job of being able to run the football and control things.”

Following a Laurel fumble that was recovered by Alex Mittner at the New Brighton 36, the Lions got on the scoreboard as Nyasanu Greene scored from 3 yards out at the 9:52 mark of the second quarter. Greene finished with 103 yards rushing and 48 yards receiving in the game.

“New Brighton is a great football team,” Cooper said. “Those backs run hard. They only had one loss coming in, and it was for good reason.”

The Spartans answered on their next series, as McCoy broke free for a 55-yard scoring scamper. DeRosa’s kick gave Laurel a 21-7 with 8:01 remaining in the first half.

“It was pretty much the same thing on the second run,” McCoy said. “Our line blocked really well.”

New Brighton cut the deficit to 21-13 at the half as Greene hauled in a 13-yard touchdown pass from Gabe Haddox. The extra-point kick was wide left.

Greene and Haddox again teamed up for a touchdown on the first possession of the second half, this one from 12 yards out. The conversion pass failed, but the Lions drew to within two, 21-19, with 7:14 to go in the third quarter.

As was the case all night, Laurel again answered the New Brighton score.

Taking over on their own 38-yard line on the ensuing possession, the Spartans marched the distance in eight plays. McCoy capped the all-rushing drive by scoring on a 14-yard run. The kick failed, but Laurel increased its lead to 27-19 with 2:21 remaining in the third.

“We were able to control the line of scrimmage all night,” McCoy said. “Our line did a great job.”

New Brighton came right back on its next series, as Kei’Ondre Abercrombie rumbled for a 69-yard touchdown. Abercrombie was stopped by McCoy on the conversion run, leaving the Spartans with a 27-25 lead.

The teams traded punts early in the fourth quarter before Laurel was able to put together a 13-play drive to the New Brighton 21. The drive stalled there, leaving the Lions with one last gasp with 27.9 seconds remaining in the game.

A pair of incomplete passes and two illegal procedure penalties moved the Lions back to their own 12. Mitch Miles sealed the victory for the Spartans by sacking quarterback Gary Pugh as time expired.

“We made a couple big plays when we needed to down the stretch,” Cooper said. “It was a fight down to the finish. What a game.”

Mr. Daniel Malizia, age 73, passed away peacefully on Friday, Oct. 23, 2020. Mr. Malizia was preceded in death by his parents, Frances and Rinaldo A. Malizia, and is survived by his brother, Anthony Malizia (Denise); his daughter, Jenny Malizia (Ken Arenz); his son, Kevin Malizia (Molly Daws…