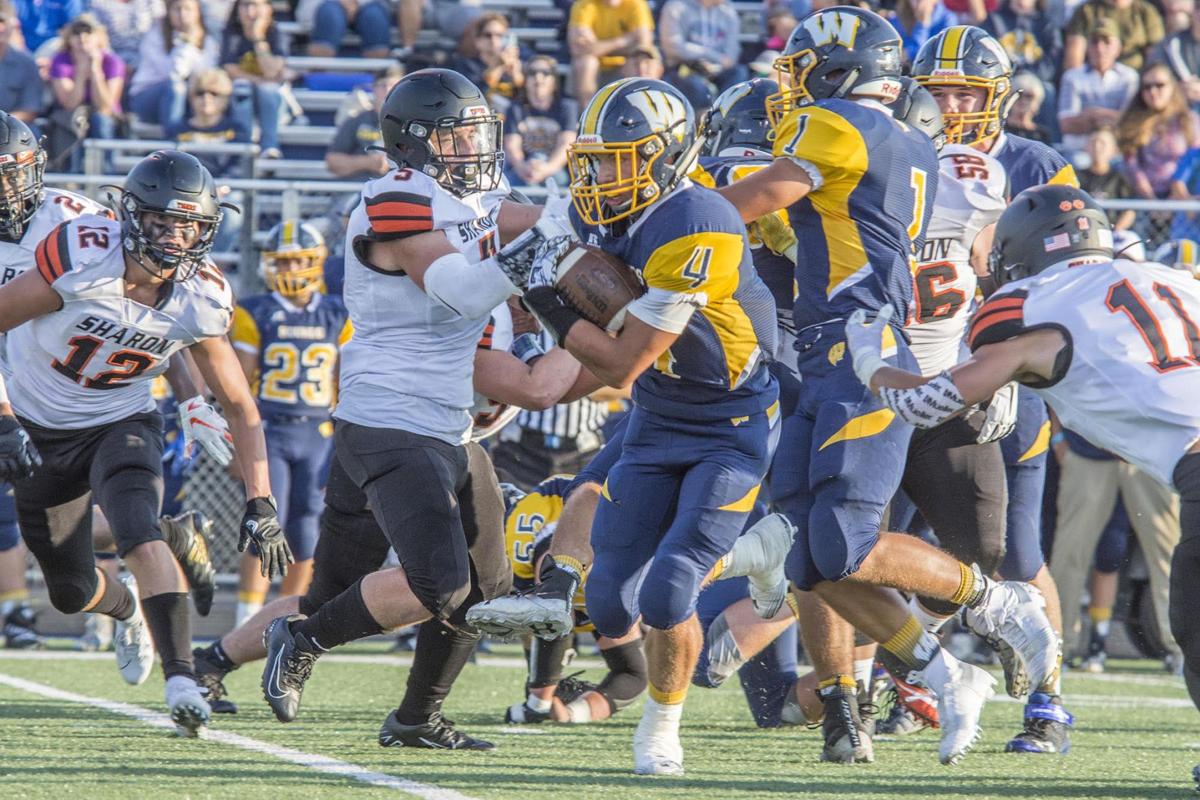 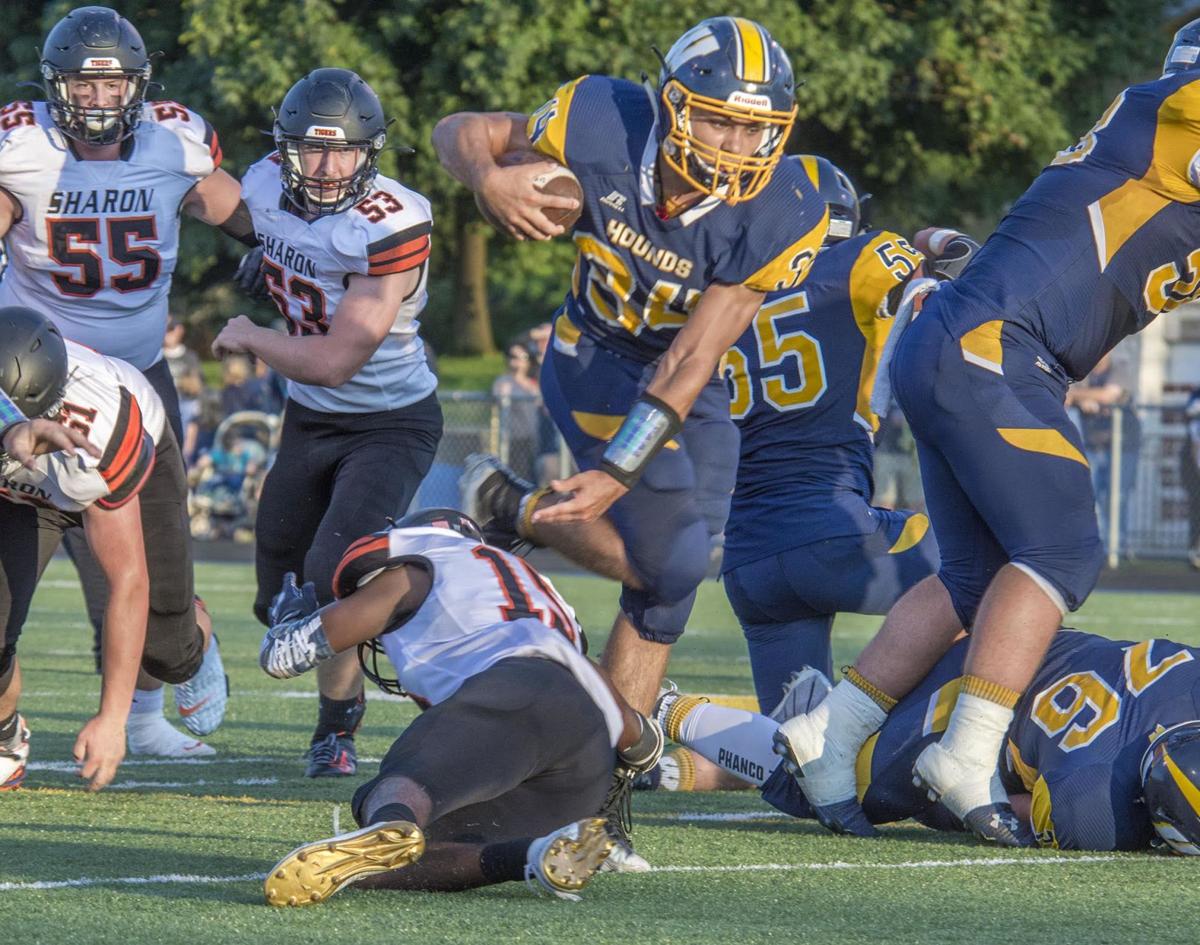 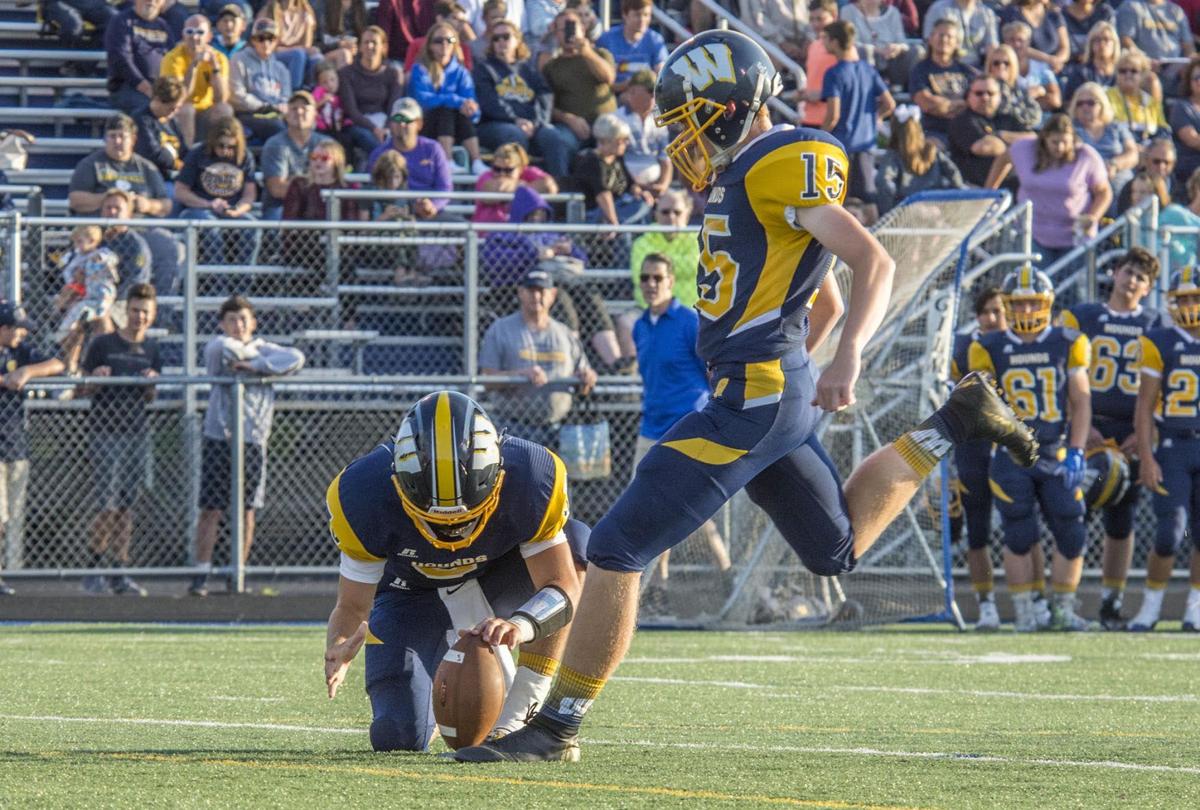 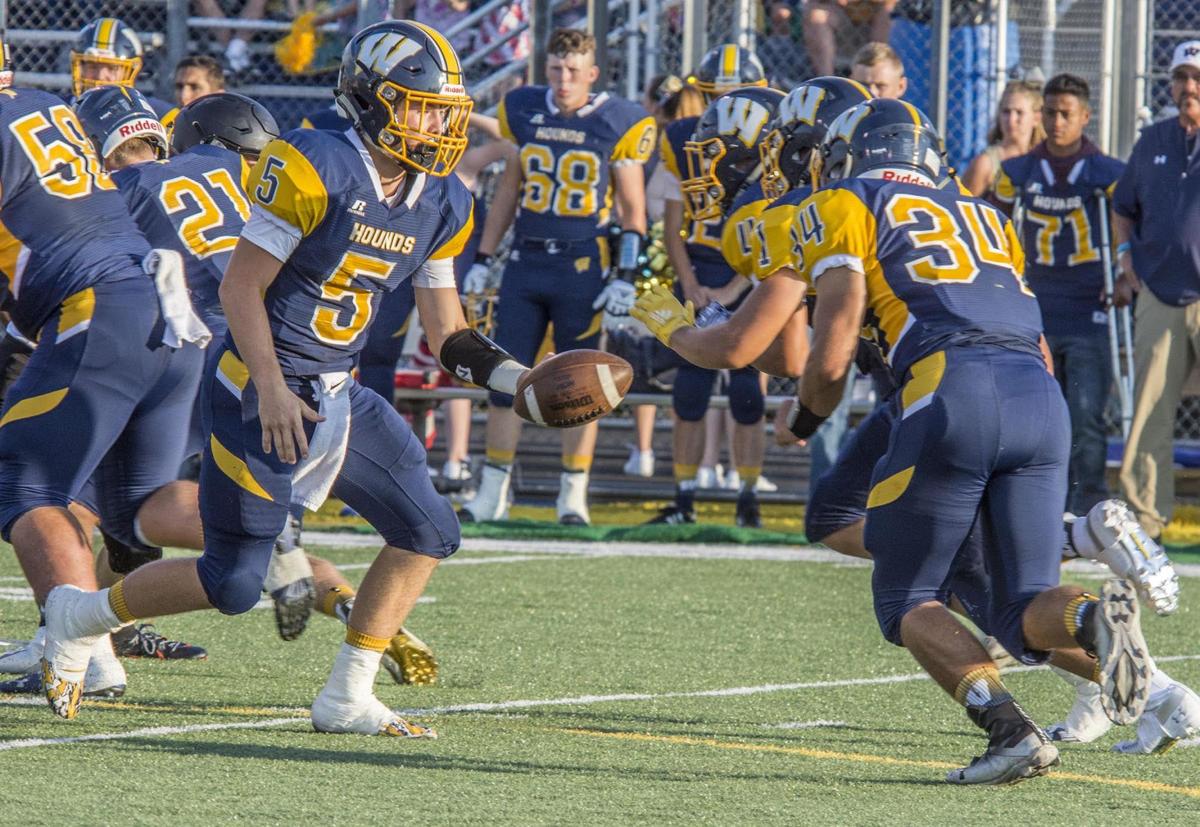 Wilmington quarterback Caelan Bender hands the ball off to running back Darren Miller.

'Hounds waste no time showing their greatness with win over Sharon

Wilmington quarterback Caelan Bender hands the ball off to running back Darren Miller.

If your high school football team wants to win like Wilmington year after year, Weston Phanco said it plainly and simply:

Phanco — the lone returning regular along the offensive line — helped the 'Hounds dominate the line of scrimmage. The Greyhounds' ground game garnered 290 yards, as Ethan Susen and Darren Miller mustered 126 and 123, respectively, including 28- and 49-yard first-half scoring sprints. Additionally, Susen's 70-yarder in the second stanza was negated by a penalty.

" ... Wilmington is always the premier team, up front in the trenches, in the (Shenango) Valley," first-year Tigers' taskmaster Jason McElhaney praised.

Caelen Bender bulled in for a pair of second half, one-yard plunges, the latter after Sharon surged within 19-14 with 7:21 remaining on Lane Voytik's 4th-down, 6-yard TD toss to Trey Jones.

Wilmington advanced to the 2018 PIAA Class 2A championship game, but the Greyhounds' graduation losses were significant. However, as usual, it appears that the 'Hounds have simply reloaded.

"The guys (assistant coaches) in the headsets kept telling me, 'Weston's doing a great job tonight,' and he certainly didn't disappoint us as a returning starter up front," Phillian added, also praising O-line coach Dave Welch and another assistant, Sean McConahy.

"There's no doubt about it, the key (Friday) night was the offensive line," Phillian said. "I thought they were physical from the word 'go' and they were just aggressive and physical all night long. ... You know the name Ethan Susen, but who's a guy (who everyone) should keep their eyes out for? That's Darren Miller, and Darren Miller came up in a big way.

"The thing to me that's so special about Ethan and Darren is, they run hard, of course, but what to me makes them so special is when their number's not called, they block for one another, they carry out their fakes, they're total team players. That's what makes me so proud about guys like Darren Miller," Phillian added.

"The offensive line did really well. We worked together, we pushed the ball, we got on our blocks. We were humble and hungry, we were vicious and violent on the line," Phanco explained. "There's no pressure on me. We are all together; we're a brotherhood on this team. I do have to lead them, but I feel like they know what they're doing. They're stepping up really well."

With former Greyhounds' great Cameron Marett on hand to congratulate Phillian, Miller remarked, " ... Cam Marett ... I remember last year against Steel Valley, he just looked like the toughest running back I'd ever seen. He kept taking hits and just got up again and again. From all those guys you just learn that you've got to keep fighting throughout the game, never give up, and play to win."

Ed Farrell is assistant sports editor for the Sharon Herald.

Sarah Woods passed Feb. 19, 2020. In keeping with her wishes, there will be no visitation or services. Contributions may be made to the City Rescue Mission. Arrangements by R. Cunningham Funeral Home, Wilmington Road.