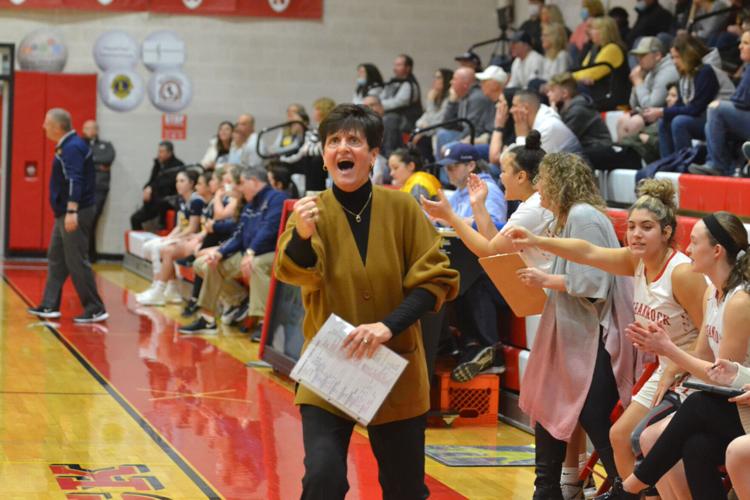 Neshannock High girls basketball coach Luann Grybowski celebrates after a 3-pointer is made by one of the Lady Lancers. 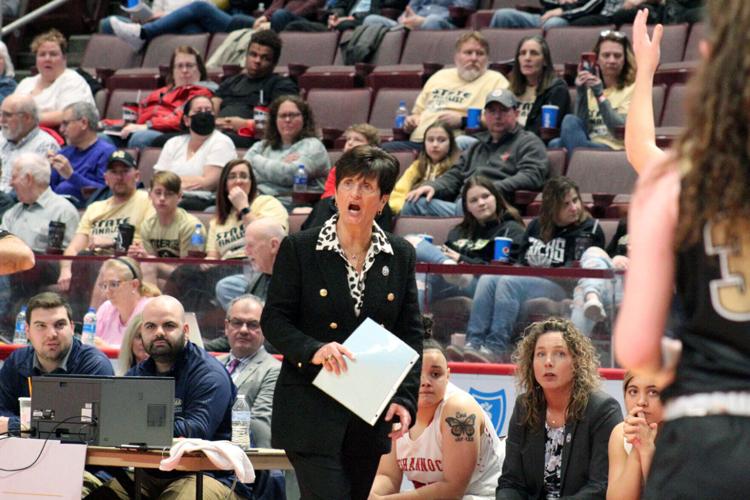 Neshannock High girls basketball coach Luann Grybowski celebrates after a 3-pointer is made by one of the Lady Lancers.

Luann Grybowski is still picking up accolades after last year’s run to the Class 2A state championship.

“To be honest, I was pleasantly surprised. Quite surprised as a matter of fact. I just never expected it,” Grybowski said on receiving the award. “I don’t know that it’s normally given to anybody on this side of the state. I’m sure they look long and hard before they make the decision. It wasn’t even in part of my mind as to I would get it.”

Grybowski secured her 700th career victory as a head coach last year while leading the Lady Lancers to a 29-2 record and winning the PIAA and WPIAL Class 2A titles.

“Obviously, you and I both know it doesn’t happen without good kids and a good program,” Grybowski said. “It doesn’t happen without the season we had and in fact the past two seasons. That’s a testament to this program and my assistant coach Jessica Shevitz. To me, it justifies all the hard work that I’ve put in and the years and the time. Summer, fall, winter — very seldom do I take time off. That’s basically what it means to me.

“Hopefully, we produce good kids and they learn life lessons and they become kids of character and integrity. Hopefully, that’s the standards we want for this program. The wins are great if they come by and if you do things the right way, they do. It’s rewarding all this time.”

Grybowski does indeed take seldom time off. The same day she was announced as the coach of the year, she helped the Neshannock eighth-grade team capture the junior high girls basketball championship while assistant coach Jessica Shevitz led the seventh graders to gold.

“We started junior high the second week in August,” Grybowski said. “I started this week with (varsity) conditioning.”

According to Grybowski, the award is a collective, not individual, effort.

“I think we have a great combination of everything in this program. We have great kids, we have good athletes, we have kids that are average athletes that exceed expectations and work very hard, we have great parents, everybody’s supportive of everyone and I feel like we have the best coaching staff,” Grybowski said. “I am the one awarded the award, but I feel like it’s an award for all of us. It’s making a statement that this program has reached a pinnacle that very few teams get to reach.”

In the 2020-21 season, Neshannock took second in the PIAA championship game after a 54-43 loss to Mount Carmel. Grybowski believes that the 2020-21 and 2021-22 seasons were the catalyst of achieving the award.

“I absolutely feel that. We made it to the state final last year and then onto WPIAL and made it to the state final again. It was a surprise I think to everybody, but, like I told you all this year, it is the toughest thing to get back,” Grybowski said. “Whether you’re the winner or runner-up, it is very, very difficult to get back. They stayed the course and they just bloomed this year. I feel like our success, a lot of teams want to go undefeated, I don’t want to lose, but those couple of losses made us more hungry. That was part of the reason for our success also. These two years were instrumental.”

Awards or not, every season is another return to the drawing board.

“That’s why you can’t always look at the accolades. You have different kids and a different combination every year. You go back to the drawing board,” Grybowski said. “It’s about being a blue-collar team and blue-collar worker. Doing everything that’s necessary, working hard every day. Success doesn’t come on game night. For me, that’s the goal.

“I’ll never be a win-at-all-cost type of coach. I’ll carry the kids up but care more about them as people and hopefully prepare them for successes in their life. Kids need to be so much more versatile and be able to handle things that happen in your life that you don’t expect. It’s just like the game of basketball.”

Monday marked the first day of conditioning for the Lady Lancers. Once nine of her players end their volleyball season, it will be a full team getting ready for another season — preparing for one game at a time.