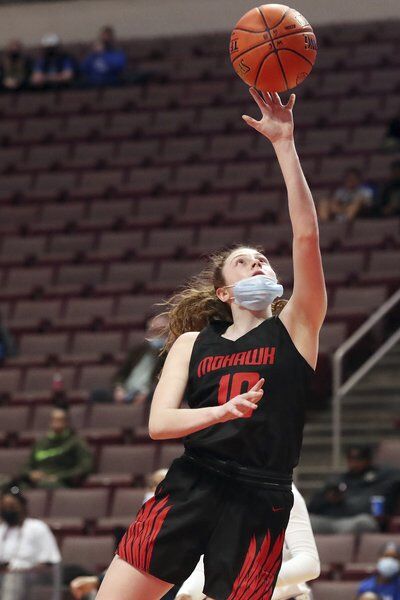 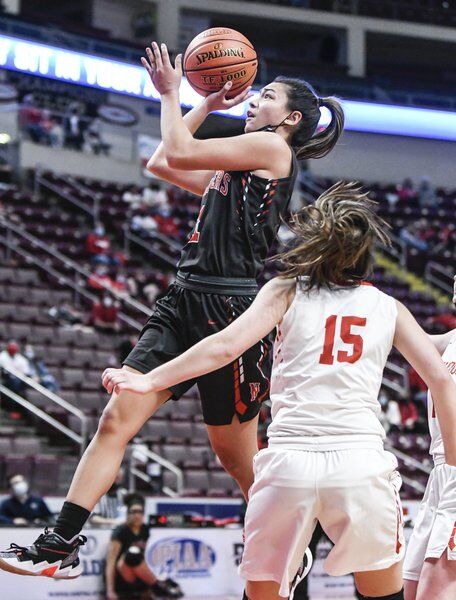 Neshannock's Neleh Nogay elevates to get a shot off past Mount Carmel's Lauren Shedleski during Thursday's state championship game.

Neshannock's Neleh Nogay elevates to get a shot off past Mount Carmel's Lauren Shedleski during Thursday's state championship game.

The 2020-2021 high school basketball season was a special one indeed.

The Neshannock and Mohawk high girls squads made certain of it.

No county girls basketball program had ever competed for a state basketball championship. Both of those teams crossed that off the county’s to-do list. And on the same day — March 25.

Both teams took different paths to Hershey. Silver, though, is what both schools brought back to the county. But it certainly wasn’t a disappointment. The teams conquered many things this season — COVID, tough opponents and a strict playoff field, among others. They were both honored in today’s Lawrence County Athletes of the Week for their accomplishments, which appears on page B2.

Sure, the playoffs are difficult every season around the state no matter if it’s the boys or girls field. COVID, though, made them more complex with every school permitted to compete, but only district champions moved on to the state playoffs. District champions only reaching the state playoffs is one rules revision that needs to stick in future years in all sports. Allowing any teams other than champions to advance is merely just handing out participation trophies to teams. A loss should end your season, but that’s another topic for another time.

Neshannock defeated Serra Catholic for its second WPIAL crown and second in the last three years. Mohawk had to go through perennial power North Catholic in the title tilt. The same North Catholic team that defeated the Lady Warriors not once but twice in the regular season in Section 1-3A play.

It’s also the same Trojanettes team that was appearing in the program’s seventh consecutive WPIAL championship game and looking for their fifth consecutive district title. No problem, make it two straight WPIAL crowns for Mohawk.

Senior leadership. It’s what led Mohawk through its run through the entire season — the regular season, WPIAL playoffs and state playoffs. The Lady Warriors had five seniors on the roster, including four starters and two that went over 1,000 career points this year in Paige Julian and Nadia Lape.

Neshannock didn’t have seniors to lean on. The Lady Lancers had no seniors and just two juniors — Neleh Nogay and Addi Watts — on the roster. But they came together as a team does and showed their grit all season.

Two gritty teams. Two different identities. And both providing plenty of things to be proud of and thankful for this basketball season.

Regardless of last week’s outcomes, these teams have every reason to hold their heads up high. They battled each day throughout the season. Not just on the court whether it was in practice or in games, but in the game of life, staying healthy to be on the floor and able to compete.

Neshannock and Mohawk gave county fans plenty to smile about this year. Each team won 19 total games and they both won a WPIAL championship, the second for each program.

The Lady Lancers will be a dangerous team next year. Injuries were another obstacle Neshannock had to deal with throughout the year. Neshannock will be at 100 percent next year and that will be a scary thought for the opposition.

Mohawk has been a fun team to watch these last two years. If you missed catching their games the last two seasons, you missed out on a lot — strong perimeter play, lethal accuracy from the free-throw line, intense defense and discipline across the board.

The Lady Warriors got a raw deal last year with the onset of COVID-19 shutting down the season. They were set to compete in the PIAA quarterfinals against Cambria Heights.

The program just wanted closure for this season. To be able to walk off the floor on their own terms and completing the season. Sure, Mohawk wanted to win gold. But this year’s seniors not only got to play in Hershey for a championship, but they got that closure, the ability to play the season out to completion.

This was a basketball season that won’t soon be forgotten around Lawrence County, especially in girls basketball circles. Neshannock and Mohawk will forever be linked to county basketball lore as breaking through to play for a state title.

We’ll be talking about this season and these two teams in particular for a long time. We all have plenty of fond memories of both teams to cherish and plenty to be thankful for with the closure of the season.