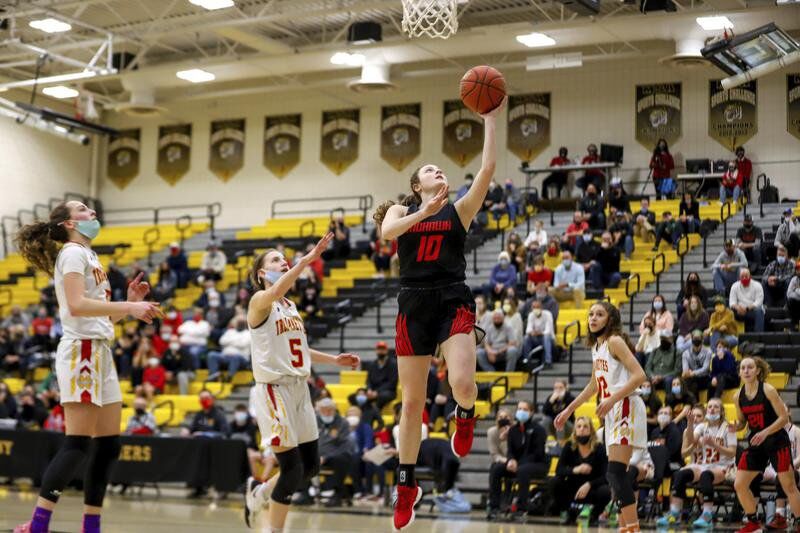 KAYCEE ORWIG | NEWS Paige Julian goes up for a layup during a WPIAL championship game against North Catholic. 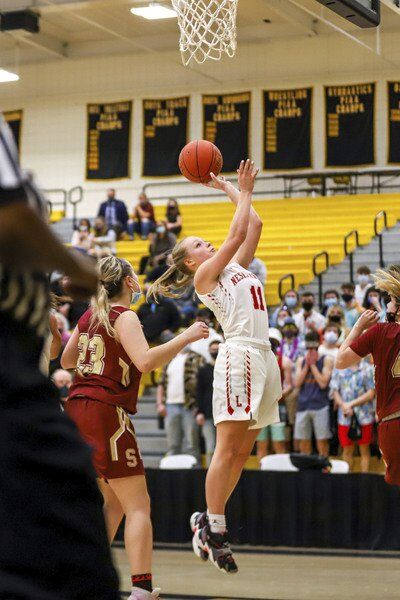 KAYCEE ORWIG | NEWS Neshannock’s Addi Watt goes up for a layup during the WPIAL Class 2A championship game against Serra Catholic.

KAYCEE ORWIG | NEWS Paige Julian goes up for a layup during a WPIAL championship game against North Catholic.

KAYCEE ORWIG | NEWS Neshannock’s Addi Watt goes up for a layup during the WPIAL Class 2A championship game against Serra Catholic.

The teams all had a different story to tell, too.

Neshannock’s girls tipped things off. The Lady Lancers were the top seed in Class 2A. A challenge was presented by the No. 2 seed — Serra Catholic.

Neshannock, though, boasts veteran coach Luann Grybowski. She came in with four rings and now has that one for the thumb. Grybowski also improved her career record to 683-305 in her 41st season as a coach.

A team with zero seniors and plenty of talent walked off the North Allegheny High School court with Neshannock’s second WPIAL title in the last three seasons, 54-44.

It was Mohawk’s turn. The second-seeded Lady Warriors had a tall task in front of them. Mohawk was facing top-seeded North Catholic.

The Trojanettes strolled into North Allegheny with plenty of swagger. And why not? They owned two wins over the Lady Warriors in Section 1 play by a combined 25 points. If that’s not enough, North Catholic was appearing in its seventh straight district championship game and bidding for its fifth consecutive crown.

But, you didn’t expect Mohawk coach Mike O’Lare and his team to come in intimidated, did you? The Lady Warriors came out swinging, scoring 20 first-quarter points, burying buckets from behind the arc in doing so.

Mohawk set the tone with that first-quarter barrage and was able to carve out a 54-48 decision over North Catholic.

Many will call this an upset. But is it? The Lady Warriors won the WPIAL Class 3A championship last season. North Catholic stepped down to Class 3A and into Mohawk’s section. Mohawk isn’t lacking in senior leadership, either. Paige Julian, Nadia Lape and Hannah McDanel among others all have been through key battles over the last two seasons.

Five seniors total for Mohawk had their high school careers on the line against a perennial power with only the winner advancing to the PIAA playoffs because of the pandemic. County fans will get the ultimate treat in watching these ladies continue on for a shot at what was stripped from them last year because of a COVID shutdown — a state championship.

Bring on the boys. New Castle gets the next crack at winning a title. Thirteen times previously the Red Hurricane hoisted the big trophy and sported gold medals around their necks.

Winning No. 14 wouldn’t be easy for the New Castle boys. The ‘Canes were in their first season in Class 5A after climbing from Class 4A. They also would have to face a familiar foe — Section 2 rival Chartiers Valley. The teams split the regular-season series, with each team winning away from home.

New Castle got the No. 2 seed because of that late-season home loss to Chartiers Valley, which earned the No. 1 seed. At this point, seeds didn’t matter, it was the two best teams in Class 5A doing battle.

Just one month ago, New Castle suddenly hit the skids. The ‘Canes surprisingly lost two out of three games and didn’t look smooth in a home win over South Fayette. But that seems like ancient history now.

New Castle coach Ralph Blundo has brought the program to the grandest stage of the WPIAL playoffs six times previously in his 11 seasons. One thing is certain: if you bet against Blundo and his ‘Canes, you do so at your own peril.

New Castle has many signatures as a program and defense is at the top of the list. That same defense stifled the Colts and Brayden Reynolds in the championship game. Yes, Reynolds still got his points, 22 of them, in fact. But that’s a far cry from the 42 that he scored at the Ne-Ca-Hi Field House in a 77-59 Chartiers Valley verdict on Feb. 12.

The Field House is spacious, and that’s a good thing, because banner No. 14 will rise to the rafters early next basketball season. Fourteen WPIAL titles also is the most all-time around the district. And Blundo has coached seven of those victories.

That’s seven titles for Blundo in 11 seasons as the coach. His teams have at least reached the WPIAL semifinals all 11 seasons and the PIAA playoffs all 11 seasons. Only a WPIAL championship would extend that streak. You didn’t doubt that, did you? Shame on you if you did.

Monday night, the county was sporting a shiny 3-0 championship record this year. Very nice. It could get better, and it would.

But the Wolverines, coached by New Castle grad Steve Antuono, didn’t have that luxury as a No. 11 seed. Sure, Ellwood City opened the playoffs with a home game — ONE home game. And the Wolverines made it count, topping Valley in the preliminary round, 72-20. Ellwood City then would have to go on the road and beat three very good basketball teams to advance.

No sweat. The Wolverines boarded a bus each time and defeated No. 6 Avonworth (58-53), No. 3 Shady Side Academy (81-73 in overtime), before taking a trip in the county to Neshannock against the No. 2 seed. Ellwood City took care of business against the Lancers, avenging two losses to their Section 1 rivals with a 60-51 decision.

In one week, the Wolverines walked away with road wins over the 6, the 3 and the 2. And this wasn’t on neutral floors, either. This was in enemy territory.

Ellwood City was on a mission and that was to board the bus Monday night back home full of gold. And the Wolverines did just that, 53-50, over top-seeded South Allegheny. What a journey, wins over seeds 6, 3, 2 and 1. If there is a tougher trek to a title, complete with playing games at the home of the opposition, I would be shocked.

Some might say Cinderella is still dancing. But Ellwood City would tell you they are a very good basketball team. And they are.

The best part about these teams is there are more chapters of basketball still to write. Not only this year, but in the near future. County basketball fans have plenty to be proud of and a great deal to look forward to.

There could be more gold in their immediate futures, too.