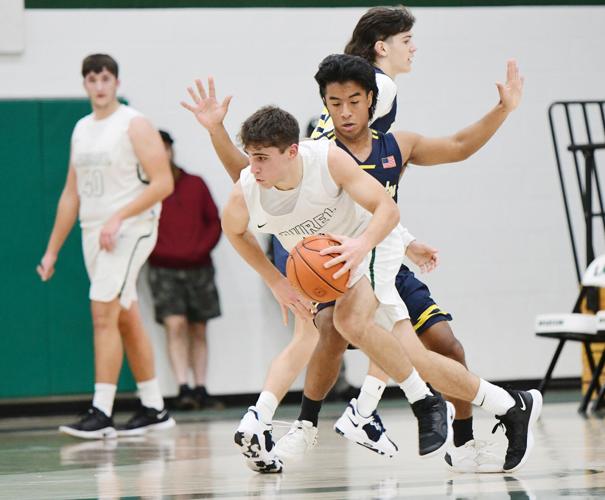 Laurel’s Laban Barker is shown here dribbling the ball up the court with pressure from Wilmington’s Pierce Nagel earlier in the season. Barker excelled last week, leading the Spartans to three victories. 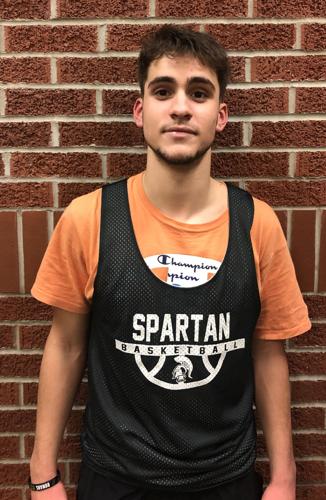 Laurel’s Laban Barker is shown here dribbling the ball up the court with pressure from Wilmington’s Pierce Nagel earlier in the season. Barker excelled last week, leading the Spartans to three victories.

Laurel High’s Laban Barker can be hard on himself when he plays basketball.

Barker uses it as motivation to get better on the court instead of a hindrance.

Last week, Barker hit the game-winning basket for Spartans in a matchup against Mohawk, giving Laurel the 42-40 victory.

“I do. I love it,” Barker said, commenting on if he likes handling the ball in high-pressure situations. “It wasn’t just me, it was our team who helped me to make that shot, I would’ve never made it without my team.”

Barker chipped in 22 points and grabbed six rebounds during the matchup.

“Laban is just a player and great players make plays. That, at the end of the day, is what we say,” Laurel coach Ken Locke said. “He just was able to make a play and follow his own up. It’s just what you expect from him so it wasn’t a shock.

“He just has a knack for it and finds a way. He’s just a great kid to coach.”

For his efforts, Barker was named Lawrence County Athlete of the Week, as voted on by the New Castle News sports staff.

“I think that my strengths come from how my team plays,” Barker said. “My team has executed these last few games. We’re eight and one and we’ve made mostly every game count because we’ve won every game...my team helps my strengths come on to the court and play out.”

A son of Donna and Matthew Barker, the 5-foot-9 junior guard also plays football and is currently unsure if he will compete in track and field this year for Laurel.

“I’ve played this game for a very long time,” Barker said. “I loved it from the time I started playing it. My dad played and my whole family was a big basketball family. They kind of got me into it and ever since I’ve been working at it.”

Barker has a few different motivators on the court.

“First, I give all glory to God, I put Him first when I go out on the court,” Barker said. “I play to win. I’m so glad I have this team. This team has done a lot to help me as a person and a player.”

Barker commented that he wants Laurel (2-0 section, 8-1 overall) to take the WPIAL Section 1-3A championship and go on as far as possible this season.

“There’s lots to improve on,” Barker said. “We still got a lot of games left and we got to put our foot on the gas and step it up these next few games because they’re big and we need to win them.

“Offense and defense, I think we have to step it up on both sides.”

Barker commented that coach Locke has helped him in numerous ways.

Locke commented that Barker has strengths that go unnoticed.

“I think it’s those types of things, the stuff away from the basketball, that people really don’t look at all the time. He just does a phenomenal job, he loves to play.”

Dean Cracraft, 92, of Edinburg passed away on Aug. 11, 2022. Arrangememts have been entrusted to the Terry Cunningham Funeral Home, Bessemer.