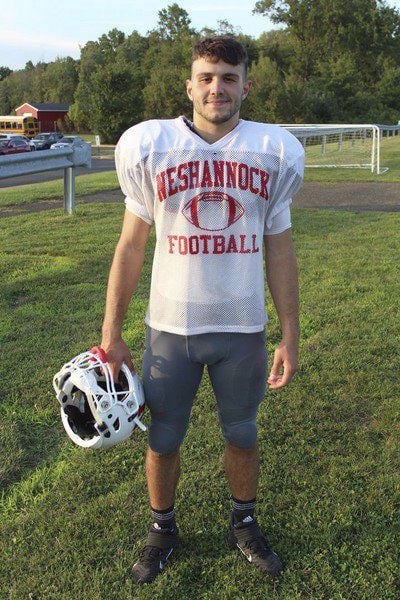 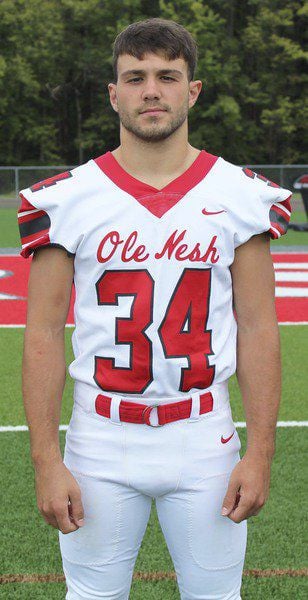 Neshannock High came into the 2019 high school football season with high hopes, but an opening-night setback stunted some of those aspirations.

Back at home against Riverside, the Lancers were a determined team out for their first win after losing in Week 0 at Avonworth. Making sure Neshannock (1-1) secured its first victory was Braden Gennock. The senior running back ran for a whopping 250 yards on 20 carries and three touchdowns on the ground as the Lancers picked up win No. 1, 54-34.

“Braden is just a great kid,” Neshannock coach Fred Mozzocio said. “He comes here and doesn’t say boo. He just comes to work every day and works hard. He’s a great kid to coach and a great kid to be around. Everyone on the team likes him. He never opens his mouth. He just plays football. That’s the way we like them up here.”

“He’s put a lot of hard work in,” Mozzocio said. “We talked about him putting a lot of muscle weight on in the winter and he worked really hard in the weight room to get a little thicker and stronger. He showed that Friday night breaking numerous tackles. He did a great job for us. We’re proud of him. The O-line likes to block for him.”

For his performance, which was the biggest rushing output by a county player this year, Gennock has been named Lawrence County’s athlete of the week as selected by the New Castle News sports department staff.

“It was thrilling to come back from a loss,” Gennock said. “We thought we did a good job of scouting Avonworth and thought we could beat them. Coming back and beating Riverside, especially since they beat us last year, it was just thrilling to beat them. It was very exciting.”

The team captain said he wasn’t aware during the game what his yardage totals were. It wasn’t until after the game when people started mentioning how high they must be.

A son of Kirisa and John Gennock, Gennock also added two catches for 76 yards and scored on a long screen pass for good measure.

“We hit him on a screen,” Mozzocio said of the play call. “Anytime we’re able to get him in the open field, we feel he can take it the distance.”

The Lancers came into Friday’s contest trying to overcome the slow start that did the team in against Avonworth in the 21-7 opening-night loss. Mozzocio said the team started sluggish but played better in the second half. While everything came together for Neshannock against Riverside, the Lancers now turn their focus to Mohawk.

The Warriors are 0-2, but Mozzocio and his players aren’t taking their county rivals lightly.

“We’re preparing for Mohawk just like anyone else,” Mozzocio said.

“We can’t doubt anything about Mohawk,” he said. “They were a very physical team last year and as long as we just keep our heads together and focus up, we should do a great job.”

Sarah Woods passed Feb. 19, 2020. In keeping with her wishes, there will be no visitation or services. Contributions may be made to the City Rescue Mission. Arrangements by R. Cunningham Funeral Home, Wilmington Road.