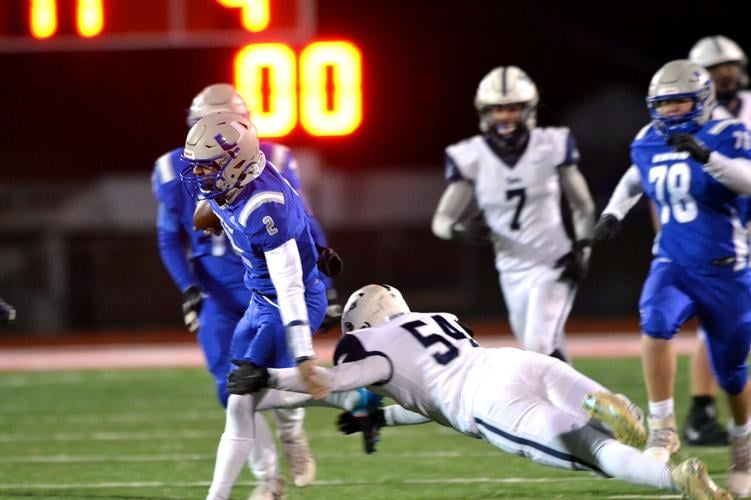 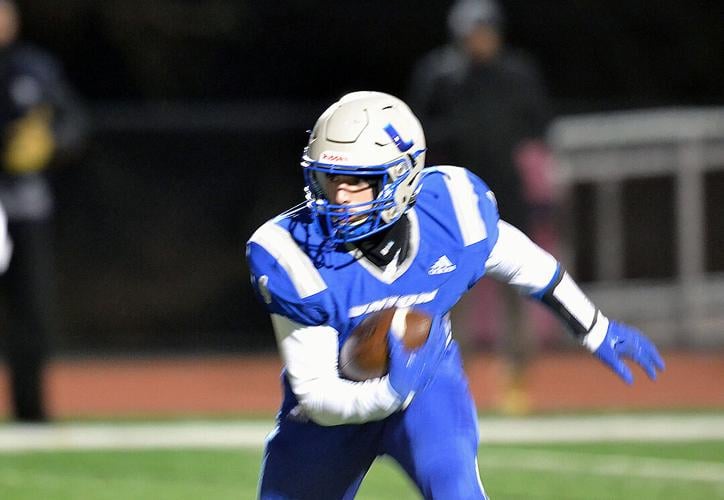 Union’s Matt Stanley runs with the ball during a WPIAL Class 1A playoff game against Rochester at Freedom High School. 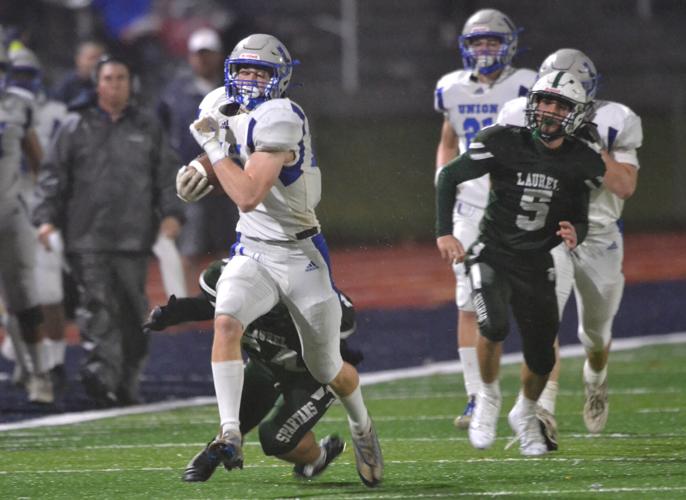 Union’s Kaden Fisher is shown here racing toward the end zone during a WPIAL Class 1A quarterfinal against Laurel. The Scotties will meet Rochester in the WPIAL Class 1A semifinals Friday night. 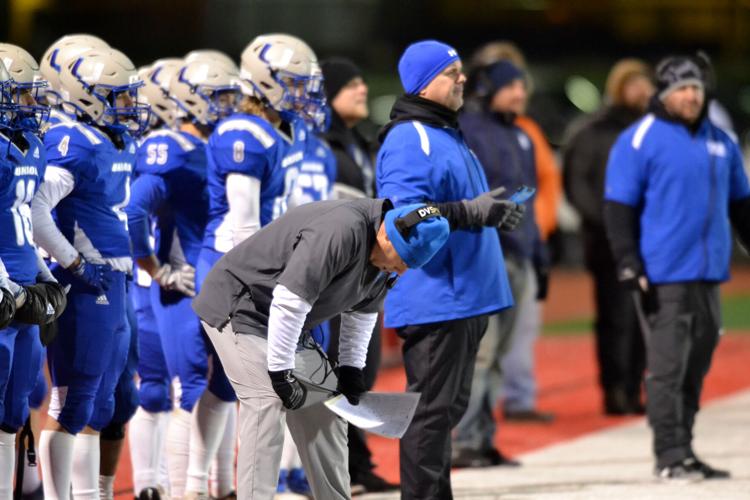 Union coach Kim Niedbala reacts to a play during a WPIAL Class 1A playoff game against Rochester at Freedom High School. 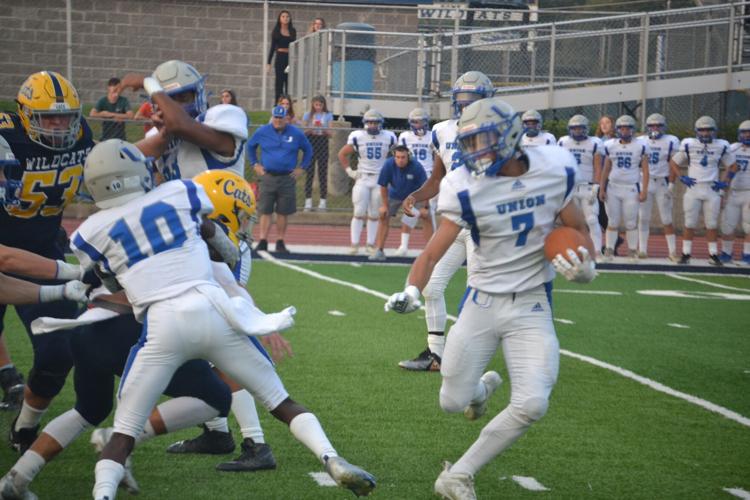 Union’s Matt Stanley runs with the ball during a WPIAL Class 1A playoff game against Rochester at Freedom High School.

Union’s Kaden Fisher is shown here racing toward the end zone during a WPIAL Class 1A quarterfinal against Laurel. The Scotties will meet Rochester in the WPIAL Class 1A semifinals Friday night.

Union coach Kim Niedbala reacts to a play during a WPIAL Class 1A playoff game against Rochester at Freedom High School.

The Scotties have a chance to change that Friday morning.

Tenth-seeded Union advanced to the WPIAL Class 1A championship game and will square off against top-seeded Bishop Canevin at 11 a.m. at Pittsburgh’s Acrisure Stadium. It marks the first appearance in a WPIAL football championship game for the Scotties since 1973. Union lost to Springdale in the Class 2A title that season, 20-14.

“At the end of the day, it’s a great accomplishment,” first-year Union coach Kim Niedbala said. “We’re focused on this week and this game. After it’s over is when we’ll take a look at what we’ve done.

“Winning is not easy. I’m happy for these kids.”

That 1973 Union squad was coached by Chuck Lucidore. The Scotties rolled to a 9-0 mark in the Tri-County league that season and 11-1 overall.

Union (10-3) reached this year’s WPIAL championship game by holding off Rochester last week, 18-16. Bishop Canevin (12-1), the defending WPIAL Class 1A champs, moved on with a 49-21 decision over South Side Beaver.

“For us, it has to be another game. That’s how we will approach it. Seeding is seeding.”

The Crusaders cruised to a 42-7 verdict over Our Lady of the Sacred Heart last year in the WPIAL Class 1A championship game. Bishop Canevin’s season came to an end the next week in the semifinals in a 23-14 loss to Redbank Valley.

“We worked hard for this moment,” said third-year Crusaders coach Richard Johnson said. “We were hoping to get back down there (WPIAL championship game).

“The state semifinals left a bad taste in our mouth. The kids were there every day in the offseason working hard. They were focused to getting back down there. Hopefully, we will come ready to play.”

Bishop Canevin will appear in its fourth district championship contest. The Crusaders captured crowns in 1990 and 2021, while taking second in 1983.

This is the third trip all-time for Union to the WPIAL championship game. The Scotties settled for a tie with Avonworth in 1959 in addition to the 1973 setback to Springdale.

Union’s football program was born in 1924. The Scotties captured their first-ever win that season in a 6-0 decision over North Street Junior High, in what likely could have been billed as the ‘Neighborhood Brawl’.

The teams have met five times previously, with Bishop Canevin holding a 3-2 lead in the series.

The Crusaders have scored 33 points or more nine times and 40 or more seven times. They also have surpassed 60 markers three times.

“Obviously, they are the defending WPIAL champion; they are very good,” Niedbala said. “They have very explosive and big athletes. They will give you everything you want.”

Kole Olszewski, a 5-foot-10, 165-pound sophomore quarterback, is the team’s leading quarterback. Olszewski is 85 of 128 through the air for 1,373 yards with 16 touchdowns and four interceptions.

Jason Cross, a 6-0, 165-pound junior quarterback/defensive back, also sees action under center. Cross, who has Football Bowl Subdivision offers from Mid-American Conference members Akron and Kent State, is 50 of 85 through the air for 1,277 yards with 18 touchdowns and two interceptions.

“They are two different type of quarterbacks,” Niedbala said. “They both bring something different to the table.

“They can both do multiple things and they use them in different ways. It doesn’t matter which one is in the game, they are both talented.”

“Nelson is dynamic; very athletic,” Niedbala said. “They love to get him the ball on quick screens or bubble screens.

“He can stretch the field vertically and he’s dangerous in the return game. He’s also great defensively.”

“Carter is a good player,” Niedbala said. “They are very big up front and they are very good up front; he has a lot to do with that.

“He’s a good athlete. I watched him against Clairton. He made some great runs in that game, and he’s done it all year.”

The Crusaders appear to be more of a passing team than the Scotties’ opposition last week — Rochester — was.

“It’s a completely different set from what Rochester does,” Niedbala said. “Rochester runs the old-school T and Wildcat.

“Bishop Canevin is more of a spread offense with four wide receivers. They’ll get in a couple of heavy sets. But, that’s why you play the game. Each week is a different challenge.”

Bishop Canevin won the Black Hills Conference crown at 7-0. The Crusaders are outscoring the opposition, 41.8-8.7.

“They’ll mix it up offensively,” Niedbala said. “They’ll take what the defense gives them. There’s nothing wrong with them running the ball. They’ve done it well in the past.

“Defensively, they’re going to play a lot in the box. They are very active and very physical. They run really, really well. At the end of the day, they like to play a lot of man and they will challenge you.”

Braylon Thomas, a 6-2, 180-pound quarterback/defensive back, guides Union’s offensive attack. Thomas has compiled 1,409 rushing yards on 207 carries with 18 touchdowns. He has completed 67 passes in 141 attempts for 1,089 yards with 10 touchdowns and 12 interceptions.

“He’s a dual-threat guy,” Johnson said of Thomas. “He has the arm to make the throws and the legs to get out of sticky situations.

“We have to do a good job of containing him. Someone needs to know where he’s at at all times.”

“It’s in his blood lines,” Johnson said of Gunn. “I know the Gunn family has done big things for that program. He’s another in the long list of talented athletes from that family.

“He runs hard. He wants to get the extra yards. He will get a foot in the ground and get vertical. We have to be physical at the line of scrimmage against him.”

Johnson noted the Scotties have many capable weapons that can hurt a defense.

“Matt Stanley. Basketball is his sport. But, he’s a leader and an athlete,” Johnson said. “He brings some intangibles to the table. We have to know where he’s at, especially defensively. Elijah Booker can get loose, too. They have some playmakers, for sure.”

The Scotties’ defense has allowed single digits five times, with one shutout. Jamel Mitchell, Antonio Perez and Mark Stanley anchor Union’s line up front. Outside linebackers include Maddox Thompson and Kaden Fisher, while Matt Stanley and Brennen Porter are inside linebackers.

“We try and use our quickness and athleticism,” Niedbala said of his team’s defensive unit. “We’re not the biggest group. But, they’re all hard-nosed kids and they compete at a high level every week.”

Bishop Canevin will have to contend with Union lining up and going for two points each time it scores a touchdown, rather than kicking the extra point.

“Hopefully they don’t score that many times for it to be an issue,” Johnson said. “If they go for two, we have to treat it as a short-yardage situation and play our best defense.”

“Coach Niedbala is from the Bob Palko coaching tree. He does a bunch of different things,” Johnson said. “He will give you formations you aren’t used to seeing. We have spent a lot of time defensively looking at them.

“We’ve played a couple of teams from their conference and we had a chance to see them. It’s going to be fun. They give you looks you’re not used to. Their defensive front seven is tough to run the ball against. We have to get physical. It’s going to be nasty in the trenches. But, we have to win that battle.”

The keys to victory remain the same for Niedbala.

Union and Bishop Canevin are no strangers to playoff matchups The Crusaders ousted the Scotties each of the last three seasons in the WPIAL Class 1A basketball playoffs — 58-45 in the 2022 championship game; 68-46 in the 2021 semifinals, and 40-39 in the 2020 quarterfinals.

“The kids don’t talk about it at all,” Niedbala said of those encounters. “I’m aware of it. We come from nine square miles. We have less than 50 kids per class. That’s who we are.”

The winner advances to the PIAA Class 1A semifinals and will battle the survivor of the Port Allegany-Reynolds contest Dec. 2 or Dec. 3 at a time and site to be determined. That weekend also is the opener for high school basketball across the state.