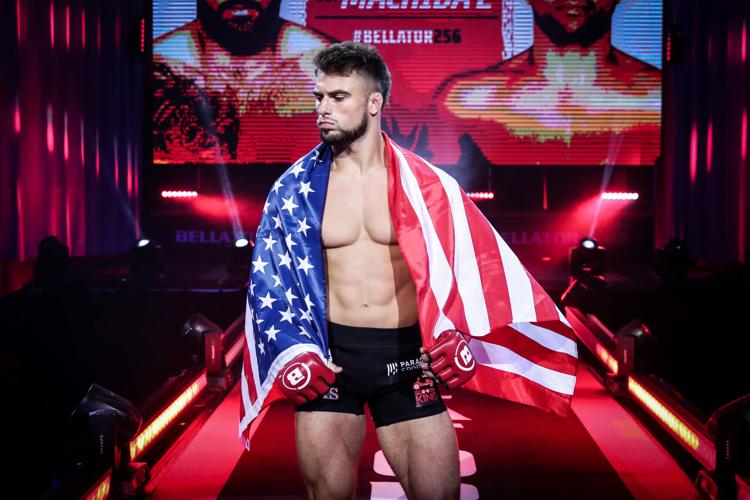 Dalton Rosta, a Laurel High graduate, is shown here heading to the cage for a Bellator fight. Rosta is set to step back in the cage Saturday in Phoenix against Duane Johnson. 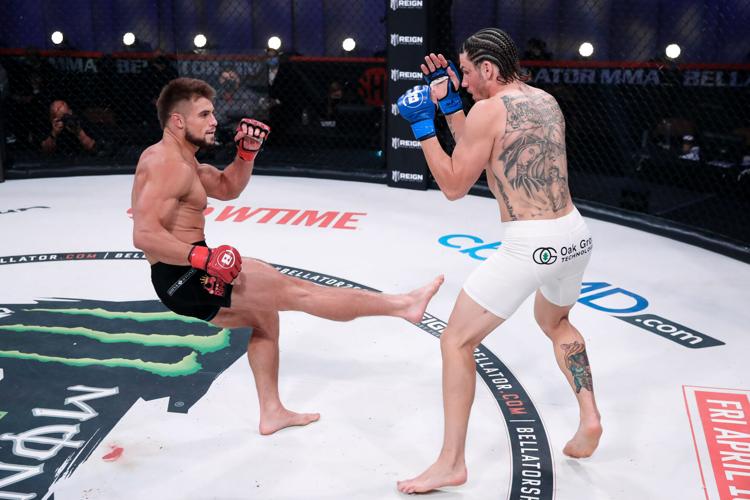 Dalton Rosta, left, a Laurel High graduate, is shown here competing in a Bellator bout. Rosta is set to step in the cage Saturday in Phoenix for his next bout.

Dalton Rosta, a Laurel High graduate, is shown here heading to the cage for a Bellator fight. Rosta is set to step back in the cage Saturday in Phoenix against Duane Johnson.

Dalton Rosta, left, a Laurel High graduate, is shown here competing in a Bellator bout. Rosta is set to step in the cage Saturday in Phoenix for his next bout.

Dalton Rosta is getting back in the octagon — finally.

The 2014 Laurel High graduate takes on Duane Johnson in a middleweight (185 pounds) MMA preliminary bout at Bellator 273 at the Footprint Center on Saturday in Phoenix.

“It’s been almost 10 months since my last fight. I am more than excited,” he said.

Rosta (5-0) was hoping for more fights after his unanimous decision over Tony Johnson at Bellator 256 in Uncasville, Conn., last April 9. However, injuries kept him from getting back in the octagon until now.

“After my last fight, I dealt with a little injury. Bellator offered me two fights, but I hurt my back in my last fight and herniated two discs. That sidelined me for about three months,” he said. “I have been back to training since the end of August and everything is good. I am not dealing with any injuries and I am pretty healthy. They offered me this fight probably at the beginning of December or late November and I am looking forward to it.”

Initially, Rosta was set to battle Romero Cotton (5-0), who checks in at No. 9 in the Bellator MMA middleweight rankings. However, Cotton suffered an injury during training and Johnson (6-2) replaced him on the card recently.

“Duane Johnson is a very good opponent and has the complete opposite style of what I was preparing for this fight camp. I was preparing for an orthodox wrestler, and now with less than two weeks left I had to change my preparations to that of a southpaw striker,” Rosta said. “He’s 6-2 and trains out of Sanford MMA, which is another high-level MMA gym. He also won his Bellator debut last year 1:04 into the first round with a D’Arce choke. I can’t take him lightly, but I’m confident in my preparations and still believe I will finish him in between the first and the final bell.”

Rosta is looking forward to a big cheering section in Phoenix.

“When I am home, I am not just centralized in New Castle. I train in gyms in Lower Burrell, Cranberry, Pittsburgh and Youngstown. I bounce around from gym to gym, making sure I am getting everything in. I know a lot of people from those gyms and areas are coming out to watch the fight,” he said. “I lived in Arizona for a brief time, too, and some people from there are coming out as well. I definitely feel that over 100 people that I know personally will be there to watch the fight.”

Rosta feeds off that support.

“It feels great,” he said. “It’s a newer sport and MMA is not really big in the New Castle area. For that many people to be supportive of me or fly out to watch my fights or get together for watch parties and show the support like they do and always send me texts or message me good luck, it’s great. I couldn’t ask for more.”

Even though Rosta, who trains out of the American Top Team gym in Coconut Creek, Fla., was sidelined from the octagon, it didn’t prevent him from making guest appearances in the squared circle at some All-Elite Wrestling shows.

“Dan Lambert, the owner of America Top Team, is involved with AEW. He needed some fighters to come on some events. He asked me to come on. It’s a great experience,” he said. “It’s fun and a good time. It’s awesome. I’d definitely do it again.”

“At my last appearance, I got to beat up Chris Jericho. I got to hit him with a steel trash can. I smashed it across his back as hard as I could,” Rosta said. “It was awesome. I grew up watching him, so it was great to have the opportunity.”

Rosta moved primarily to Florida to train at America’s Top Team, along with some of the world’s premiere MMA fighters.

“There are a bunch of great fighters and coaches there. There’s no better gym in the world,” Rosta said. “I train six days out of the week here. I am not here on vacation, but it’s nice to walk outside and it not be 10 degrees. I am down here working. I wake up in the morning, eat and train and then train more. I take a nap between training, have some therapy and train again at night.”

Despite his busy training schedule, Rosta tries to return to the area.

“I wouldn’t call it frequently, but I do come back to visit probably every other month,” he said.

He hopes his fight against Johnson is the first of many in 2022.

“If I could get on a card in March, I’d like that,” he said. “I’d like to be as active as possible, as long as I stay healthy.”