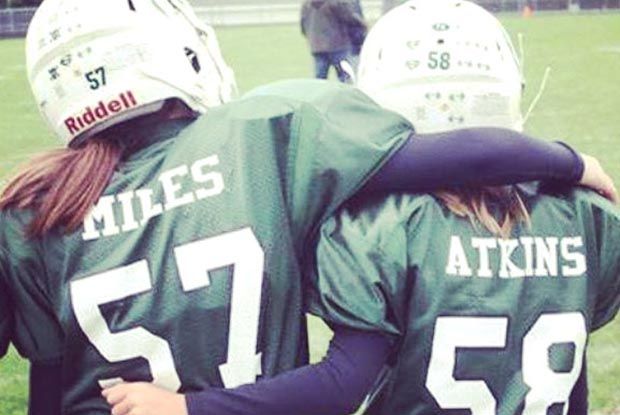 Abbie Miles, left, and Regan Atkins of Laurel are two of five girls playing at the Pee Wee level in Lawrence County. 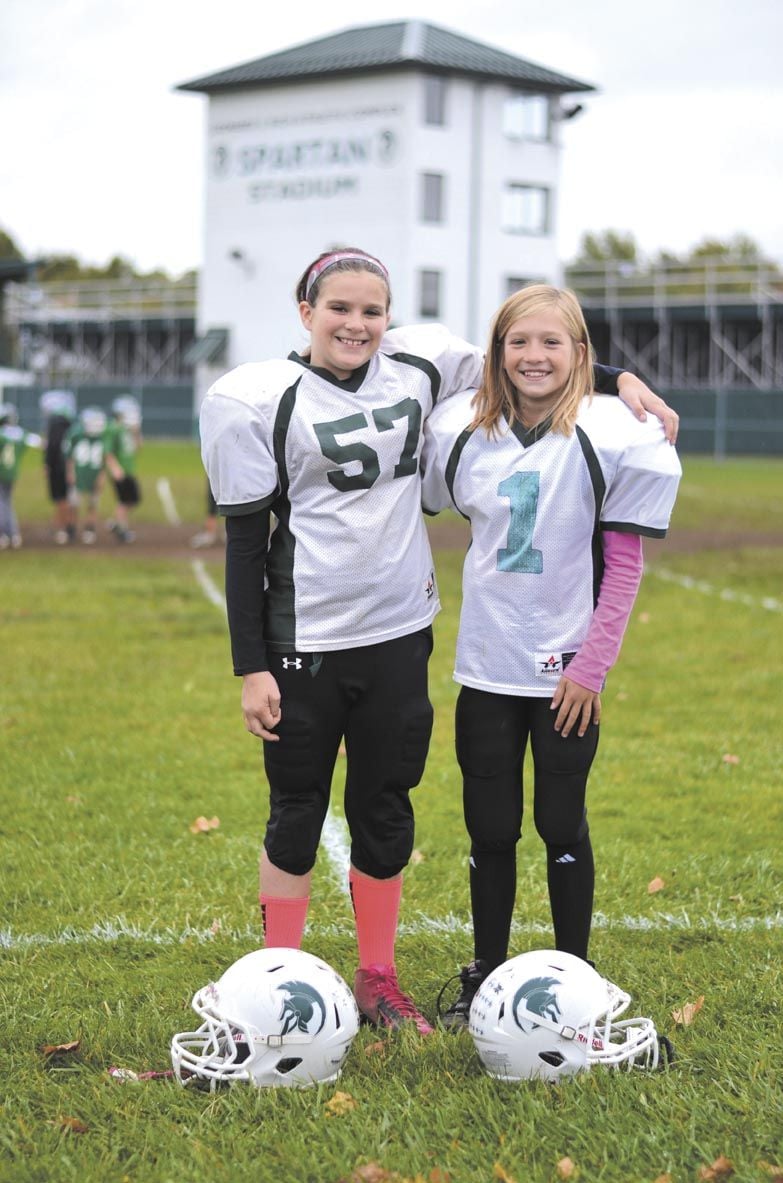 Regan Atkins, left, and Abbie Miles are following in their fathers’ footsteps at Laurel.

Abbie Miles, left, and Regan Atkins of Laurel are two of five girls playing at the Pee Wee level in Lawrence County.

Regan Atkins, left, and Abbie Miles are following in their fathers’ footsteps at Laurel.

Sometimes it is all in the genes.

Todd Atkins and Ryan Miles teamed up for Laurel High football in the late 1980s and early ’90s. Both Atkins, who went on to play on the defensive line at Penn State University, and Miles, who took his linebacking talents to Lock Haven, were key components in Laurel’s 1989 Class A championship appearance.

Now, more than two decades later, children of the Miles and Atkins families are donning the green and white of the Spartans. But this time, it’s for the third- and fourth-grade pee wee team: quarterback and safety Regan Atkins and offensive and defensive tackle Abbie Miles, the daughters of Todd and Ryan.

Regan and Abbie, both fourth-graders at Laurel Elementary School, have followed in their fathers’ footsteps for the past two years.

“I saw a girl on YouTube that played football and she made me want to try it out,” Regan Atkins said.

Todd Atkins, who has been working with Praxair Surface Technologies as an operations specialist for almost two decades, saw the look in his daughter’s face when she watched the video of Sam Gordon, the 9-year-old from Salt Lake City who gained notoriety over two years ago, and knew it was the beginning of something special

“I showed it to her and the whole time she’s watching it, I could see the awe on her face,” Todd Atkins said. “She looks at my wife (Theresa) and says, ‘Mommy, girls can play football?’ We really didn’t want to tell her she couldn’t do anything because she’s just a girl, so it’s been a good lesson for her that she can do anything she wants to.”

That lesson also is prevalent in the Miles family, where Abbie excelled in another sport mainly dominated by boys.

“My wife (Jennifer) put her into wrestling when she was young because there weren’t any other available sports for her in the winter,” Ryan Miles said. “And she was really good at it, she was a two-time girls state champion. She was in states with the boys last year and, when she was old enough to play, she and Regan were talking about it and we asked if she wanted to do it and she said ‘Sure!’ Same thing, we weren’t going to tell her she couldn’t do it. So they’ve done it, both of them have had some success and it’s been fun to watch.”

The duo are just two of five local girls playing at the Pee Wee level. Tight end Kacey Miles of Shenango, running back and defensive back Zachiyah Banton-Dofflemyer of New Wilmington and running back and defensive back Chloe Sankey of the New Castle Red squad are the others. Shalin Quinn plays for Union’s junior high team as a linebacker and fullback.

The transition Regan and Abbie made on the football field was made easier with each other’s help. Having a familiar face on the team, especially one that they’ve known their whole lives, makes everything that much simpler.

“I think they were both much more comfortable being together,” Todd Atkins said. “It’s always easier when you have a friend there with you and it’s been good for both of them. I think they also kind of like the notoriety, the kids in the school really look up to that. They get the biggest cheers from the cheerleaders and everybody else and it’s been really fun for them.”

Ryan Miles, a science teacher at Union High School and a son of former Laurel head coach and current assistant George Miles, agrees that the two are enjoying it and that it brings a positive message, but it also comes with a burning question: When is it time for the duo to hang up the shoulder pads?

“It’s been fun to watch, you can see other girls when they’re walking on the sideline just looking at them and I hope other girls can use this to say that, just because you’re a girl, doesn’t mean you can’t do certain things. My wife and I looked at it from the fact that if she can go out there and play full-contact sports with some boys, what’s she going to be like on a basketball court with some girls?

“There’s nothing that’s going to intimidate her or kind of faze her after this. It’s been a good experience, now we’re just at that point saying ‘when do we move on,’ but as long as they keep having fun, and I think she’s smart enough to realize when she’s not one of the better players. She’ll know when to give it up.”

For the fathers, it’s a flashback of their playing days. A friendship that formed on the football field now is carrying over to the next generation.

“You go back to the old pictures and it’s he and I standing together,” Ryan Miles said. “Now to see the pictures of those two, it’s pretty neat.

“I don’t imagine we ever figured it’d be our daughters playing football, but it’s pretty cool.”