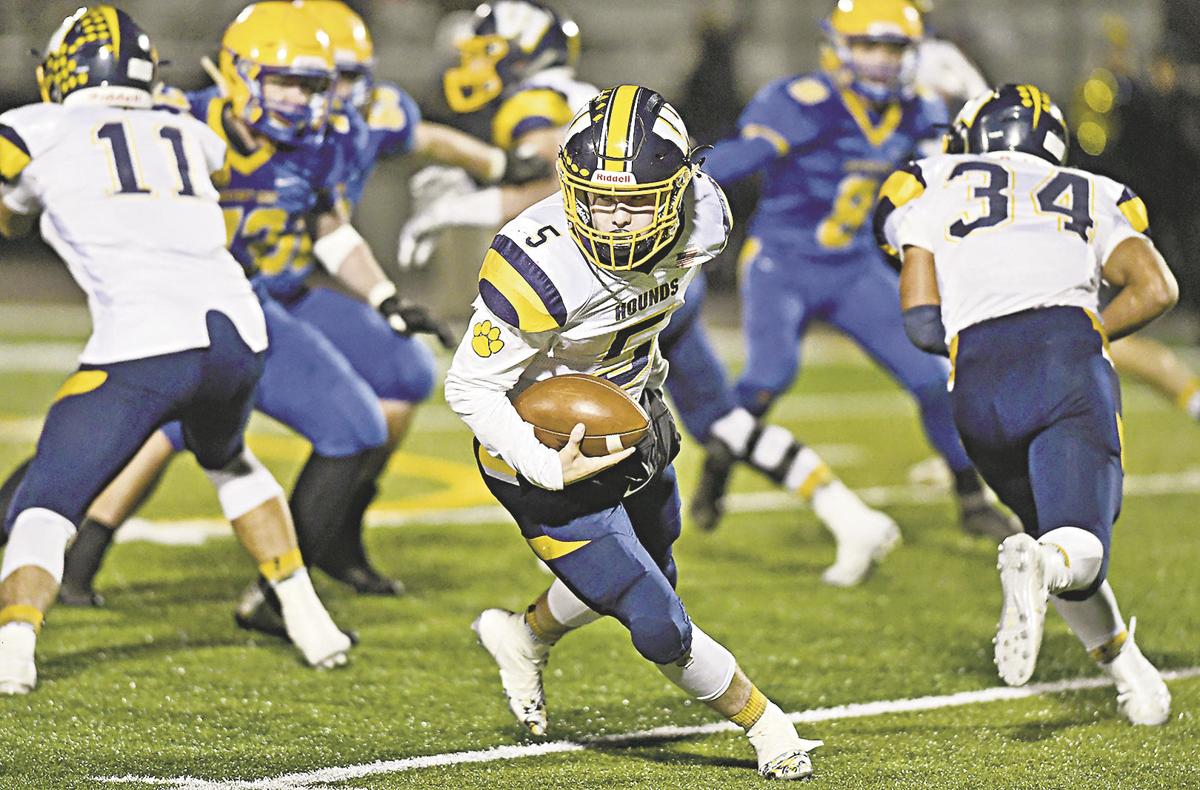 Wilmington quarterback Caelan Bender fakes a handoff to running back Darren Miller (34) and looks to run during the third quarter of their PIAA Class AA first round game against Chestnut Ridge at Somerset Area High School on Friday night. 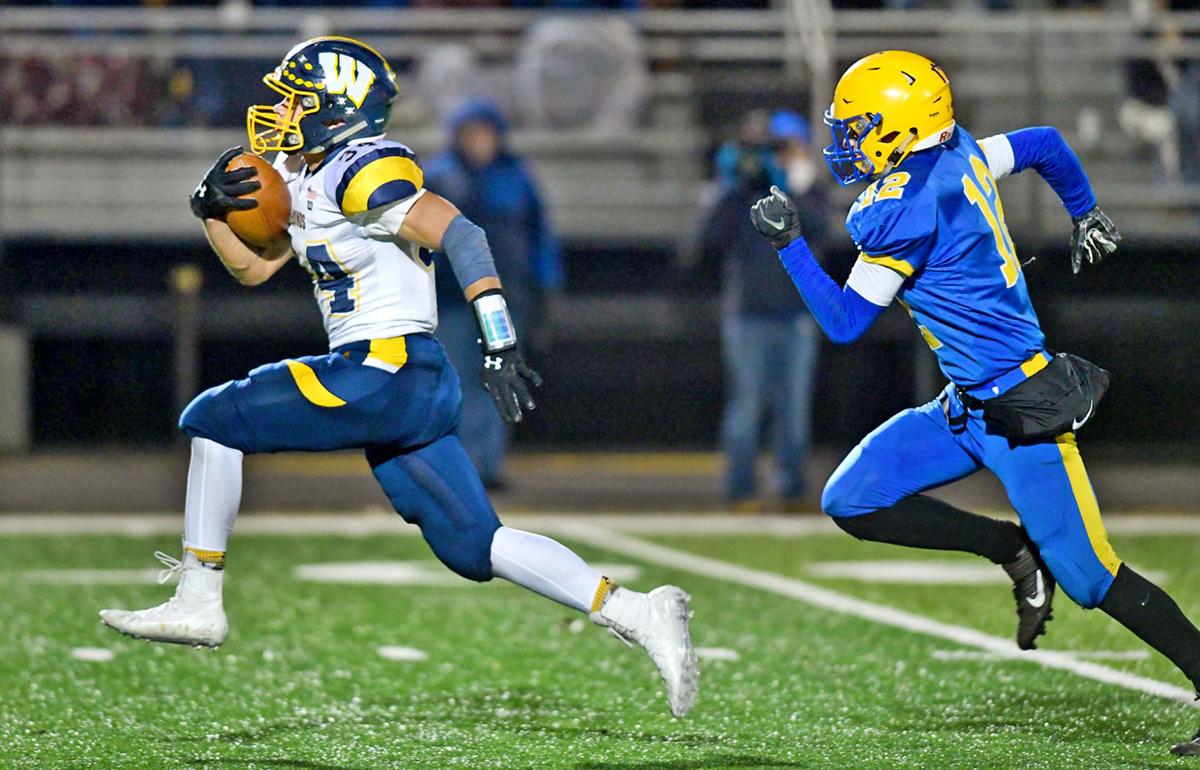 Wilmington running back Darren Miller finds the open field and takes off for a third-quarter touchdown as Chestnut Ridge safety Matt Whysong gives chase during their PIAA Class AA first round game at Somerset Area High School on Friday night.

Wilmington quarterback Caelan Bender fakes a handoff to running back Darren Miller (34) and looks to run during the third quarter of their PIAA Class AA first round game against Chestnut Ridge at Somerset Area High School on Friday night.

Wilmington running back Darren Miller finds the open field and takes off for a third-quarter touchdown as Chestnut Ridge safety Matt Whysong gives chase during their PIAA Class AA first round game at Somerset Area High School on Friday night.

“It starts with our line,” Miller said. “I think Chestnut Ridge is a very good football team, but our guys started strong and we battled and won in the trenches. A big credit goes to the guys up front.”

“I thought our kids did an excellent job in the first half,” added Wilmington coach Brandon Phillian. “I think getting the lead was critical to our success. The defense played more relaxed and to beat a quality program like Chestnut Ridge that is so well coached is huge for our program.”

The Greyhounds advance to play the winner of Saturday's Clarion vs. Ridgway-Johnsonburg matchup. The quarterfinal contest is set for a time, date and site to be determined by the PIAA.

On the opening series, Wilmington moved the ball behind junior running back Ethan Susen, but on fourth-and-one it was the Chestnut Ridge defense that stood tall, stuffing quarterback Caelan Bender on a quarterback sneak to give the ball over to the Lions offense.

Chestnut Ridge quarterback Logan Pfister found himself hurried time after time in the backfield forcing the Lions to go three-and-out, giving the ball back to the Greyhounds.

Wilmington appeared like it was going to take the lead when Bender found a wide open Susen down the seam, but he dropped an apparent touchdown pass, and again the Lions defense stood tall and forced a punt.

After Chestnut Ridge went three-and-out, the Greyhounds came back to the same play they started the last drive with and once again Bender found a wide-open Susen, but this time he was able to hold onto the ball giving Wilmington the 7-0 lead with just over three minutes left in the opening quarter.

The Lions drive stalled out in the opening minutes of the second quarter, giving the ball back to the Greyhounds.

Wilmington held the ball for its longest drive of the night, moving inside the Lions' 20, but a halfback pass from Susen was intercepted by Whysong inside the 10 to end the threat.

After another Lions punt, Wilmington’s Miller put the team on his back carrying the ball four straight times, finishing with a two-yard scoring run to extend the Greyhounds lead to 14-0.

Chestnut Ridge could not move the chains, punting the ball back to the Greyhounds. Wilmington’s Bender then went to the air, finding Junior McConahy for a 40-yard touchdown pass to make it 21-0.

Chestnut Ridge tried to answer in the final seconds of the half, benefitting from a defensive pass interference call as time expired to get an untimed down from the 7. The pass from Pfister to Whysong was complete, but Whysong was tackled just short of the goal line to end the half with Wilmington leading 21-0.

The Greyhounds added on with their first possession of the third when Miller got loose in the open field and he sprinted 53 yards for another score to make it 28-0.

Coach Max Shoemaker’s Lions didn’t give up, with Pfister finding Whysong for an 18-yard strike midway through the third quarter to get Chestnut Ridge on the board at 28-7.

The Greyhounds had an answer on their next possession with Bender finding McConahy again from 16 yards out, stretching the Wilmington lead back to 35-7 as the third quarter came to an end.

The Lions opened the fourth quarter with a nine-play drive that ended with a Trey Maxwell one yard run to cut the lead to 35-13 after the extra point was blocked.

The Chestnut Ridge faithful had more to cheer about as Susen fumbled on the next possession giving the Lions hope with just over eight minutes left to play.

Chestnut Ridge moved the ball down the field, but Pfister was intercepted in the end zone to end the threat.

After Wilmington was forced to punt, the Lions quickly found the end zone as Pfister went deep to Jonah Hillegass, who scored on a 33-yard reception making it 35-20 with just under four minutes left.

The onside kick attempt failed and the Greyhounds ran out the clock to advance in the state playoffs and end the Lions season at 9-3.

“I thought they had a few more race horses and plow horses than we did,” Shoemaker said. “Our kids are battlers and scrappers and I thought they battled to the end, and I couldn’t be prouder about that. We hurt ourselves too many times, and just never got in a rhythm."

Raymond D. Lutton, 59, of Edinburg passed away on Oct. 17, 2021. There will be no visitation or services. Arrangements have been entrusted to the R. Cunningham Funeral Home and Crematory Inc.