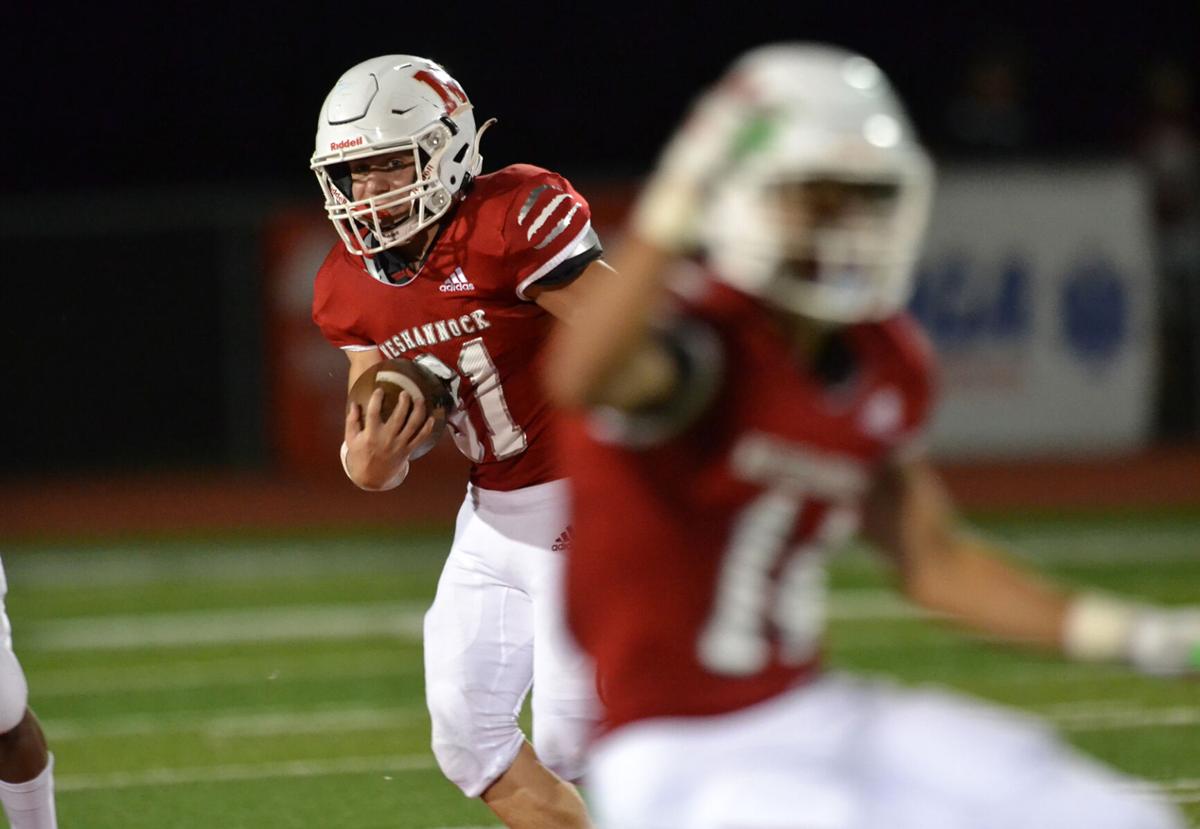 Neshannock’s Peyton Weaver, shown here running with the ball against Union earlier in the season, rushed for 194 yards and scored four touchdowns in his team’s 49-6 win over Freedom on Friday night. 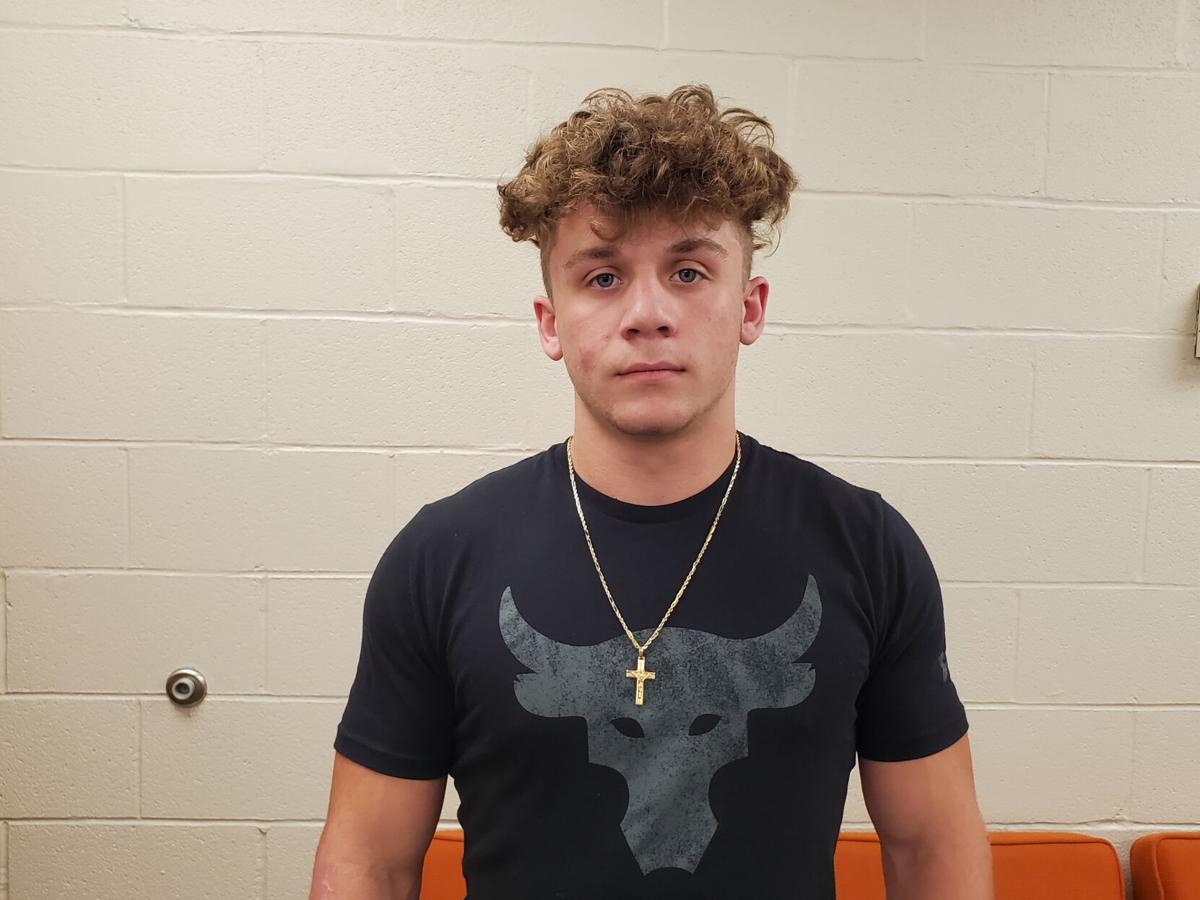 Neshannock’s Peyton Weaver, shown here running with the ball against Union earlier in the season, rushed for 194 yards and scored four touchdowns in his team’s 49-6 win over Freedom on Friday night.

Injuries occur at all levels of football. When they do, it’s a ‘next man up’ mantra for the team.

Neshannock High’s Peyton Weaver made sure to take advantage of his opportunity.

Weaver rushed for 194 yards on 12 carries, while scoring four touchdowns, in the Lancers’ 49-6 WPIAL Class 2A Midwestern Conference home win over Freedom on Friday. His touchdowns came on runs of 56, 5, 5 and 95 yards.

Weaver was making the start in the absence of teammate Cam’Ron Owens, who was injured the week before in a 15-7 road loss to Mohawk.

“I thought he played outstanding,” Neshannock coach Fred Mozzocio said. “Coming off the Mohawk game and losing Cam’Ron (Owens), we needed someone to step up. We knew we had other good running backs. We just decided because Matt Ioanilli is such a good linebacker and so important over there, we went with Peyton Weaver.

“Peyton is a very capable and a very hard-nosed back. We feel very capable with him moving forward. We’re pleased, but we’re not surprised. The line rallied behind him. We knew we all had to pull together. Everyone contributed.”

For his efforts, Weaver was named the Lawrence County Athlete of the Week, as voted on by the New Castle News sports staff.

A 5-foot-8, 175-pound junior running back/linebacker and son of Sarah Ruffner and Mike Weaver, Peyton Weaver came into last week’s game against the Bulldogs with 19 carries for 178 yards on the season. He now has 372 rushing yards on 31 attempts with eight touchdowns.

“I felt like it really hurt because Cam’Ron is like a brother to me,” Weaver said. “I knew I had to step up for him and the team. I knew he didn’t want to see us go down.

“We lost a few team leaders, some big leaders. Somebody needed to step up and I’m going to continue to do that throughout the season.”

Weaver was referring to the loss of Kurt Sommerfeld and Luciano DeLillo to injuries as well.

Neshannock (1-1 conference, 4-1 overall) led 20-6 early in the third quarter and Freedom was driving. The Lancers stopped the Bulldogs on fourth-and-goal and took over on the 5. It took just one play to turn out the lights on Freedom’s comeback bid.

“Get through there, get out of the red zone so we can do our stuff,” Weaver said of what needed to be done in that situation. “We were definitely working that night. As soon as we were out of that red zone, I think we were comfortable. The line worked beautifully that night.”

Mozzocio kept it simple for that first-down play from Neshannock’s own 5.

“We just ran one of our base running plays to get some running room,” Mozzocio said. “Peyton hit into it for a four-yard gain. A few guys looked like they had him wrapped up. But, he exploded through them. It was a great run.”

Weaver took it upon himself to flip the field position.

“That’s a long field to look at. I’m feeling I want to get us out of this end zone territory,’ he said. “Nobody wants to work from there. I was hoping to get at least a first down just to get us out of the end zone. A hole opened up and I just wanted to keep pushing for it.

“I feel like I read the right holes. The line really paved the way for me. They were looking really dominant.”

Weaver took the handoff, went up the middle and found a way to break free from the pack. He got in the open field and was able to elude a touchdown-saving tackle attempt to score from 95 yards out.

While Weaver is looking for running room this year, last year, he was creating it. Connor Montgomery, who graduated in June, was the center last year. He sustained a dislocated kneecap early in the season.

“We were looking for someone who could snap and fill the duties for us,” Mozzocio said. “I approached Peyton about playing center and he was 100 percent on board. He’s always willing to step up.

“He just wants the team to succeed. Last year, he played some running back after Connor Montgomery came back. In the offseason, I wanted to see him get his hands on the ball a little bit (this year). He has some talent and I wanted to use that. Our conference is very physical. Having three or four running backs is a luxury.”

Said Weaver, “I’ve been at a little bit of everywhere on the football field. Last year, I was practicing with the running backs all the way up to an injury to Connor Montgomery. Coach came to me and said he knew I was a center in junior high, do you want to try it again. I tried it and I tried to do everything I could do to help the team.

“I’ve been down there in the trenches with the linemen, so I have that bond with them. It definitely helps to know where they are blocking. Those guys are all my guys. I’ve played with all of those guys right there on the line. It really helps the chemistry.”

Weaver has competed in track and field in the past and he said he plans on doing it again this year.

“I would like to go to college for football, if possible,” Weaver said.