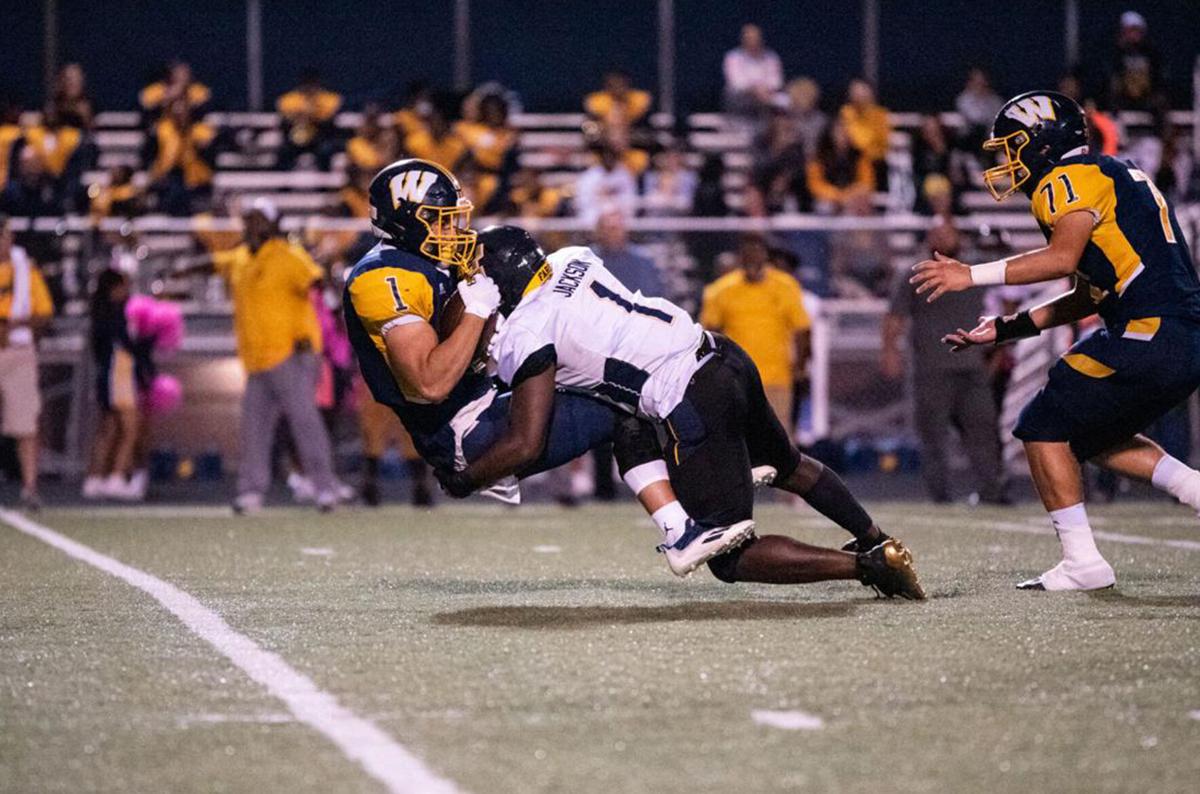 Wilmington’s Luke Edwards is tackled for a loss by Farrell’s Anthony Jackson Friday at Greyhound Stadium. 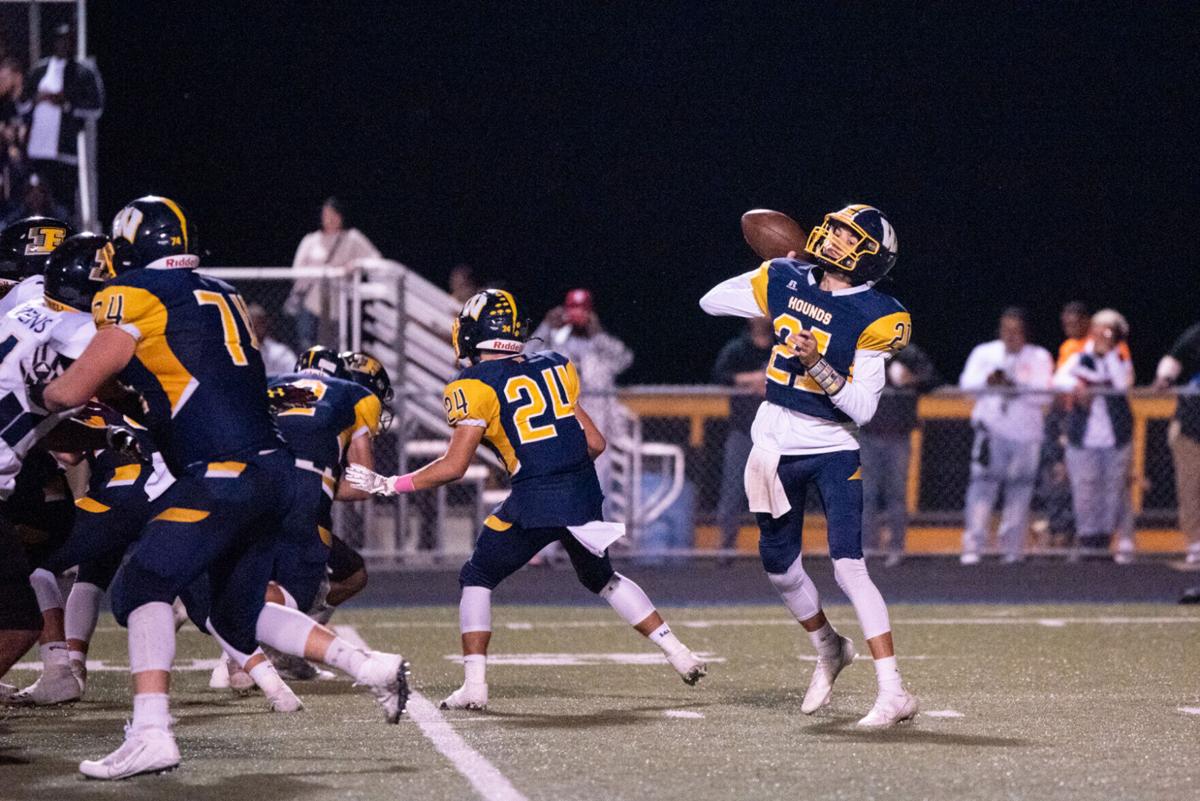 Wilmington’s Tuff McConahy passes the ball against Farrell on Friday at Greyhound Stadium. 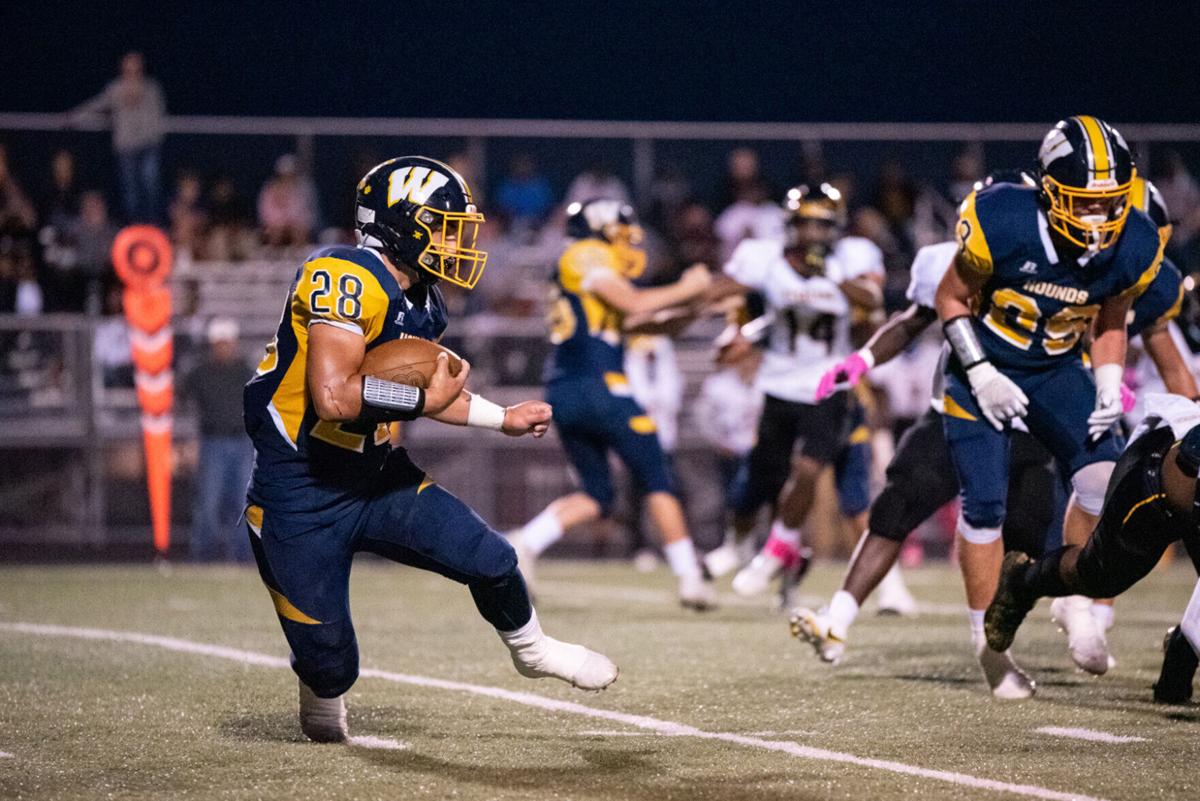 Wilmington’s Ben Miller runs with the ball against Farrell Friday at Greyhound Stadium.

Wilmington’s Luke Edwards is tackled for a loss by Farrell’s Anthony Jackson Friday at Greyhound Stadium.

Wilmington’s Tuff McConahy passes the ball against Farrell on Friday at Greyhound Stadium.

Wilmington’s Ben Miller runs with the ball against Farrell Friday at Greyhound Stadium.

Farrell’s fury and the Steelers’ speed was greater than the Greyhounds of Wilmington’s will.

Anthony Stallworth sprinted for 224 yards, including 44-, 50- and 57-yard touchdowns, leading Farrell to a 54-0 Region 1 rout of Wilmington.

For Farrell (5-0 region, 5-0 overall), it was vindication for four consecutive setbacks to the Greyhounds, including a trio a year ago.

Stallworth surpassed the career 4,000-yard rushing plateau and now has scored 52 touchdowns — and had a 77-yarder negated by a holding penalty. He came into this campaign with 3.053 yards and is pursuing Christian Lewis (4,313) for the program’s lead.

”You see what type of kid he is. He puts in the work, he’s strong, fast. and the funny thing about it is, he never asks for the ball,” Pegues said. “He’s never, like, ‘Coach, just gimme the ball.’ He’s just one of those kids who’s very special. He puts in a lot of work in the offseason, he gets it done in the classroom ... top back in the state. You know what I mean? Just very impressive.”

For all of his accomplishments, Stallworth — a returning Pennsylvania Sports Writers’ All-State selection — recalled the Steelers’ 2020 disappointments, rather than dwelling on 2021’s success. The Steelers have outscored five foes 276-6 and have yet to punt entering mid-October.

“We definitely came out with a chip on our shoulder. Last year (the Greyhounds) beat us three times in-a-row. And,” Stallworth emphasized, “little do people know, but they kept me to 27 yards last game (2020 District 10 championship, won by Wilmington, 19-14). So I was emotional this whole week. Coming into the game I knew what I had to do, we knew what we had to do, all the coaches knew what we had to do, and they put us in the right position and we came out victorious.”

“You have to tip your hat to the Farrell Steelers’,” Wilmington coach Brandon Phillian praised. “They’re a great football team, a great program. Coach Pegues and his staff did a great job, and Farrell’s players did a great job. I tip my cap to them and the effort they gave out here. They played a terrific football game.

”Anthony Stallworth is a special player, he’s a complete back,” Phillian continued. “He’s got that combination of speed and power. and not only is he fast and powerful, he’s got great vision. He sees things very clearly and makes decisive cuts. He’s a special football player, and you can see what a talented young man he is.”

Augmenting Farrell’s offense and spearheading the Steelers’ defense were linebackers Anthony Jackson and Strickland. Jackson set the tone early with a pair of ferocious tackles for lost yardage, while Strickland recovered a pair of fumbles.

”We told Taidon, ‘You didn’t play in the game last year (he was ejected from Farrell’s semifinal win at Albion against Northwestern; thereby per PIAA regulations ruled ineligible for the D-10 title tilt).’ But you can see what kind of player he is,” Pegues praised. “Two-time All-State linebacker – best linebacker in the business. He will put a hit on you.

”He’s our ‘thrasher,’ you know what I mean? He’s our guy comin’ in bruised and givin’ us big hits and and big plays, and he’s the fullback (blocking) for Stallworth. A lot of those yards (for Stallworth), he was the guy in there doin’ it, so a very special player,” added Pegues, who also cited the speedster Wilson and Omar Stewart, who hauled in 5 and 3 receptions, respectively. One of Stewart’s was his specialty – out-leaping a defender in the corner of the end zone for a 2-point PAT.

”Kylon Wilson, he’s special. ... That kid is so fast and he’s fearless,” Pegues praised. “Not the biggest kid, but he’s athletic. He should definitely be getting more (college) looks, but those’ll be coming up for him. He’s a special kid.”

At this point, Farrell faces a third canceled contest. It already had Reynolds cancel owing to COVID, and with West Middlesex merging with Sharpsville, last week was another bye. Next week’s opponent, Pittsburgh City League’s University Prep, already has canceled, so Pegues said he will transition from head coach to athletic director as he seeks an opponent.

“This was one of the games we had to get off out back, and this puts us ahead in the region, which is our first goal – the region, D-10, then a state championship. So it’s a good game to get us going,” he said.

For Phillian and Wilmington (4-1, 4-2) it’s “ ... a matter of focusing on your vision, not your circumstances. The loss is a circumstance – obviously we wish the outcome would’ve been different,” Phillian said. “But you have to focus on your vision, and part of that vision is growing, improving, getting better every day. One thing I know, there’s going to be a lot of learning opportunities to come from this football game. There’s going to be a lot of things when we look at the film that we can study and improve on.”