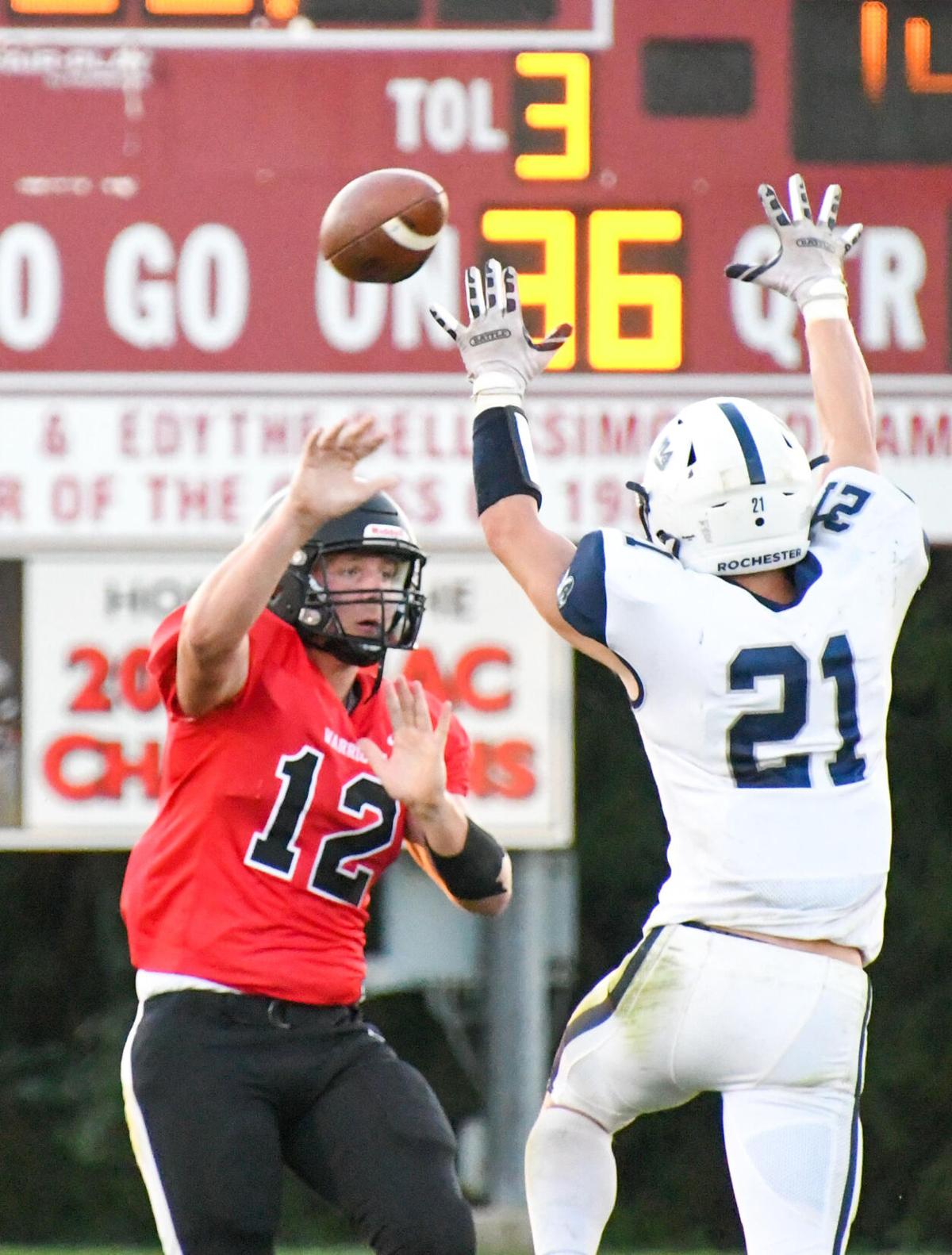 Mohawk quarterback J.C. Voss gets a pass off before a blitzing Connor Martin gets to him. 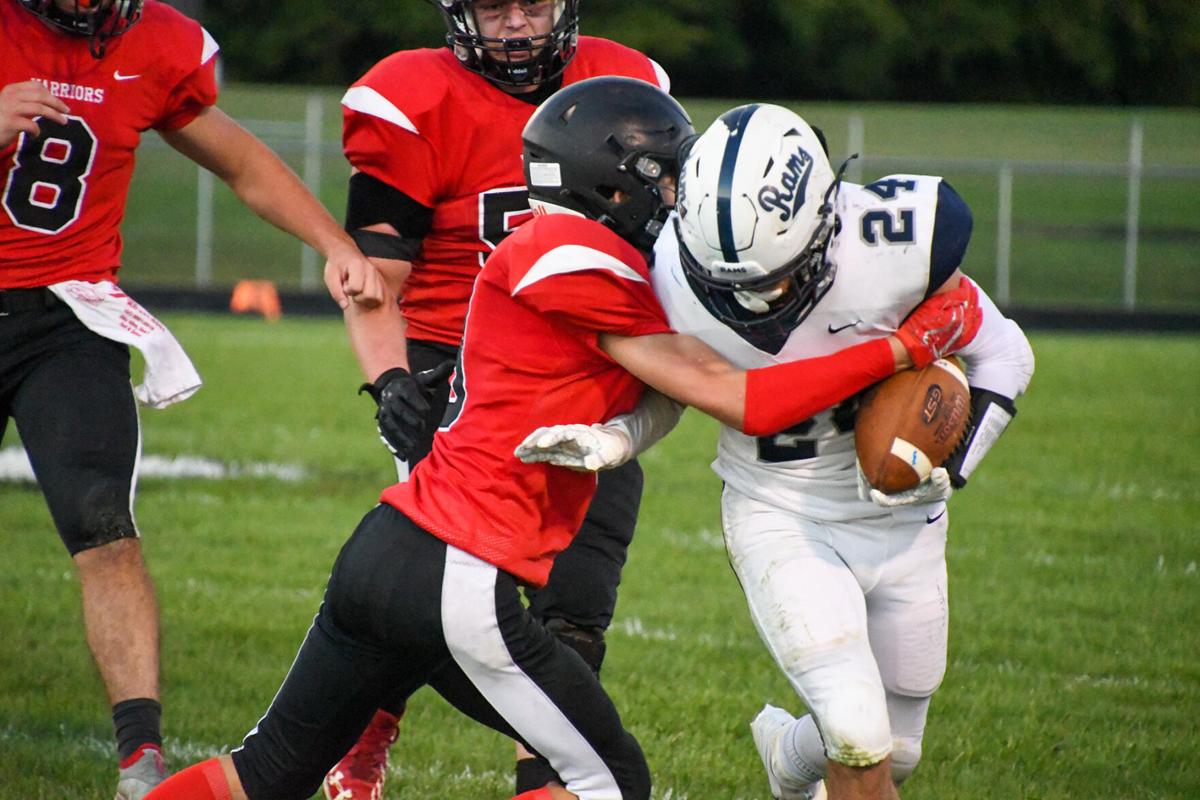 Rochester running back Sal Laure fights his way to a first down. 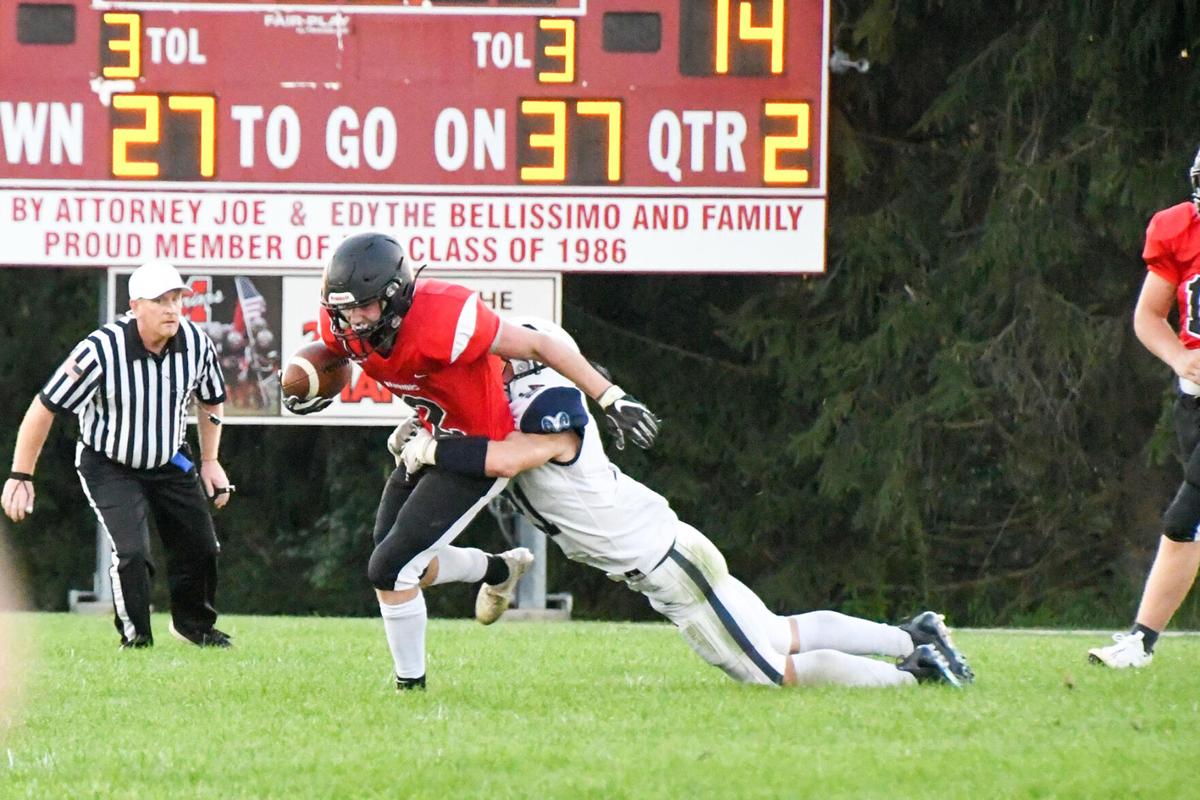 Mohawk quarterback J.C. Voss is brought down behind the line of scrimmage by Rochester’s Connor Martin.

Mohawk quarterback J.C. Voss gets a pass off before a blitzing Connor Martin gets to him.

Rochester running back Sal Laure fights his way to a first down.

Mohawk quarterback J.C. Voss is brought down behind the line of scrimmage by Rochester’s Connor Martin.

The Mohawk High football was looking to build off last week’s momentum.

The Warriors, coming off a gritty road win over Cornell, were faced with a stern test from Rochester, which is coached by Shenango High graduate Gene Matsook.

The Rams took charge lead early and cruised to a 34-3 WPIAL nonsection win over host Mohawk.

“We’re struggling to find the positive takeaways, to be honest,” Mohawk coach Tim McCutcheon said. “We’re really disappointed. It’s on me for them to come out and play like they did.”

Rochester’s Sal Laure opened the scoring on a 28-yard run with 9:34 left in the first quarter. He scored again on a 24-yard dash later in the period to put Rochester up 14-0.

“He’s a top-notch kid. He’s a player on both sides of the ball. He’s an athlete. He works hard in the weight room. He’s a strong kid and he showed that tonight,” Matsook said of Laure.

On their first drive in the second quarter, the Rams fumbled, turning the ball over to Mohawk.

In similar fashion, on the very next play, Mohawk fumbled, giving possession right back to Rochester.

“Not many teams can turn the ball over and have that many penalties, and think you’re going to beat a team like Rochester,” McCutcheon said. Subsequently, Rochester entered the end zone with a pass from quarterback JD Azulay to Jerome Mullins.

Rochester faked the extra point and added the two-point conversion courtesy of Connor Martin. The Rams held a 22-0 lead at the half.

“We couldn’t get out of our own way in the first half,” McCutcheon said. “We lined up wrong often on defense. Offensively, between the penalties and the turnovers, we put ourselves in the hole, and you just can’t do that against a good football team like that.”

Mohawk got on the board early in the third quarter when Josh Wilkins booted a 35-yard field goal.

“I got under it,” Wilkins said.

Laure got back to work on Rochester’s next drive. He broke free from the Warriors defense for a 54 yard gain.

Mohawk’s Jimmy Guerrieri blocked a Rochester fourth-down punt attempt early in the final quarter. The Warriors, though, would be unsuccessful on the drive and punt it back to the Rams on the ensuing possession.

Jerome Mullins hauled in his second touchdown pass on the drive. The conversion failed and there was no further scoring.

Mohawk returns to action at 7 p.m. Friday when it hosts Neshannock in the Midwestern Conference opener for both schools.