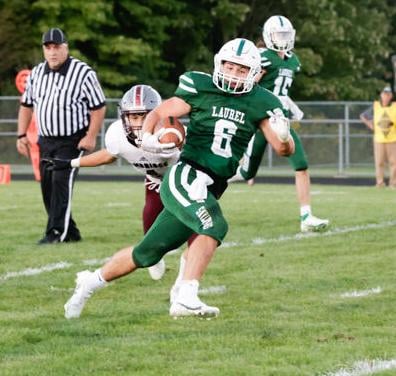 Laurel’s Luke McCoy runs with the ball during a home game against Ambridge. 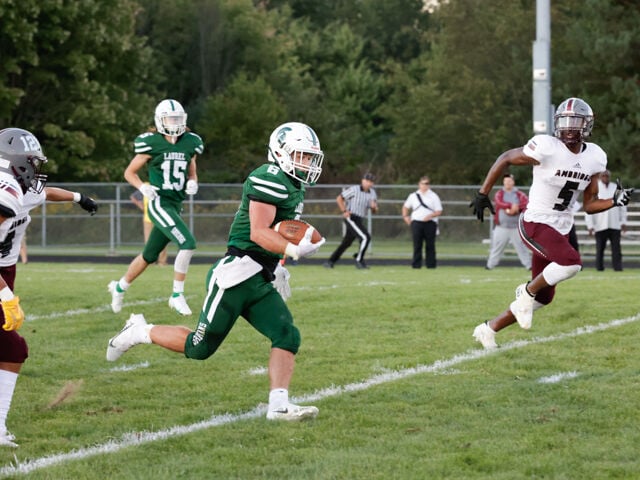 Laurel’s Luke McCoy, shown here racing for a big gain against Ambridge last week, scored four touchdowns in the game. He leads the county in rushing with 471 yards on 37 carries.

Laurel’s Luke McCoy runs with the ball during a home game against Ambridge.

Laurel’s Luke McCoy, shown here racing for a big gain against Ambridge last week, scored four touchdowns in the game. He leads the county in rushing with 471 yards on 37 carries.

He also ran into the end zone four times.

McCoy rushed for 223 yards on 17 carries and four touchdowns in leading the Spartans to a 35-6 WPIAL nonconference home win over Ambridge.

In the win, McCoy broke the school record for most points scored in a career. The new record is 252. Dylan Jones, who played for Laurel from 2009 to 2011, had the previous mark at 246 points. McCoy also tied the touchdown record of 40, which also was set by Jones.

“He’s just got such great vision; he’s explosive and quick,” Spartans coach Brian Cooper said. “He has a lot of big runs.

“He showed what he’s capable of doing. He’s such a talent. You can’t say enough about him.”

For his efforts, McCoy was named the Lawrence County Athlete of the Week, as voted on by the New Castle News sports staff.

“I feel like I played real well,” McCoy said. “I just want to keep performing like that. That’s my goal every week, to do better than I did last week.”

McCoy, a son of Kristine and Doug McCoy, set his sights on getting into the Laurel football record book.

“I think I brought it up to Coach before,” McCoy said of the records. “Once he looked into it he realized that I’ve done it.

“It’s been a goal since I started playing football. I wanted my name up there in the record book. It just felt amazing. To finally do something that I have wanted to accomplish for a long time and for it to finally come true was a dream.”

“You combine that speed, power and quickness of his, it’s incredible,” Cooper said. “That one kid (from Ambridge) had an angle on him.

“He was able with his power to shake him off and get into the end zone. That’s what makes him so special. He has great hands out of the backfield. We can line him up in empty and do different things with that.”

McCoy leads the county in rushing with 471 yards on 37 carries and eight touchdowns.

On the 81-yard scoring scamper, McCoy got into the open field quickly and coasted most of the way. A Bridgers defender was chasing after him and attempted to catch him near the end zone, but McCoy was too strong and fast to be brought down.

“There was a high safety. Once I made it about 15 yards I made one good cut and then I just used my speed the rest of the way,” McCoy said of the long touchdown run. “I could feel the pressure coming, but once he got close to me I didn’t really feel the tackler.”

A 5-foot-9, 179-pound running back/inside linebacker, McCoy also delivered defensively against Ambridge. He made nine total tackles, three of which were solo stops, while adding an interception.

“We had good coverage on the swing route,” McCoy said of his interception. “It just bounced off the receivers head and I saw the ball and reached up and grabbed it.”

Said Cooper of McCoy’s defensive prowess, “He’s going to make those splash plays. He brings a lot of energy with those hits. A lot of times that ball is popping out. When you combine his speed and power that leads to a lot of big hits.”

Laurel received the opening kickoff against Ambridge and McCoy was deep to receive. McCoy’s home run threat is a reason he’s on special teams. McCoy caught the ball and returned it 67 yards to around Ambridge’s 20. But a holding penalty negated the big play.

“They don’t really kick me the ball much,” McCoy said of opposing teams. “That was probably the first time I got the ball kicked to me in four years. I just try to do the most I can with it. A lot of them are kicking short.”

McCoy, who also plays baseball, is currently undecided on his future plans.

“I’m looking into either baseball or football. I haven’t decided yet,” McCoy said. “I would like to wait as long as I can to see what my options are.”

Olive A. "Doll" Sheehan of Bessemer, Pennsylvania, departed this life on Wednesday, Sept. 15, 2021, at her home. The daughter of Raymond and Matilda (Krise) McConnell, she was born July 8, 1932, in Chest Springs, Pennsylvania. On April 11, 1951, she married Timothy W. Sheehan. A dedicated bo…

Nancy Greene, 87, of Hermitage, passed away Sept. 16, 2021, at her residence. Memorial service is 2 p.m. Saturday, Sept. 25 at First United Brethren Church. Condolences may be left at www.cunninghamfh.com.