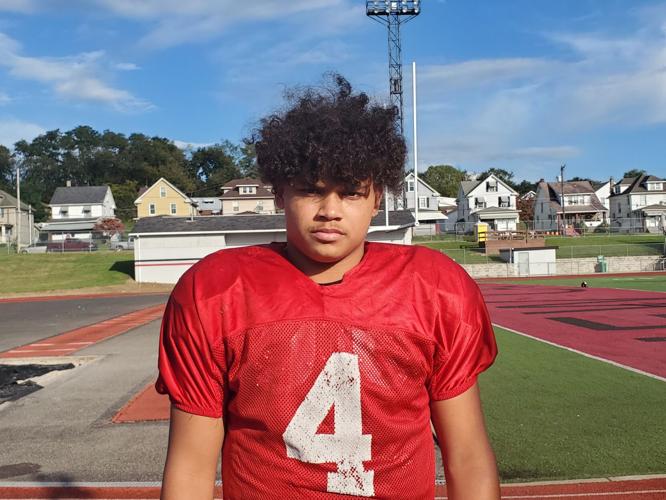 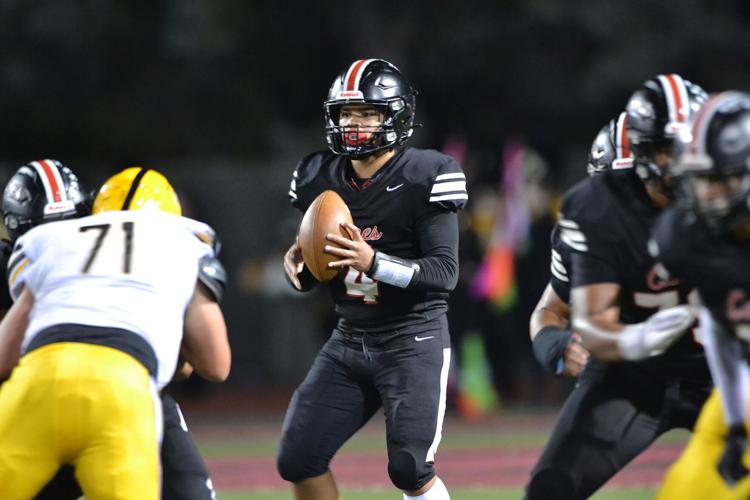 The stage was set.

The New Castle High football team was getting the ball Friday night down three with 4 minutes, 26 seconds remaining against Montour on its own 36.

Chris Hood had a shot at taking the Red Hurricane down the field for the game-winning score. And he delivered.

Hood drove New Castle 64 yards in 12 plays, connecting with wide receiver Austin Kelly for the game-winning 17-yard touchdown pass with 8.3 seconds left for a 14-10 WPIAL Class 4A Parkway Conference win over the Spartans.

“I think Chris played exceptional,” New Castle coach Joe Cowart said. “He’s really the guy that’s leading the charge; we can turn to him when things are going sideways.

“Chris has been the guy that has been rowing the boat.”

For his efforts, Hood was named the Lawrence County Athlete of the Week, as voted on by the New Castle News sports staff.

Hood, a son of Diana Tanner and Christopher Hood Sr., finished with 133 rushing yards and 54 passing yards. He also had a rushing touchdown earlier in the game.

“Coach told us this is the time to win the game,” Hood said. “This is the right opportunity. It’s the last drive of the game. Make something happen.

“We could have taken a field goal at the end, but we wanted to go for the win.”

Trailing 10-7, the ‘Canes (1-0 conference, 4-2 overall) were facing a fourth-and-three play from the Spartans’ 17. Cowart called the team’s final timeout to draw up a play.

“We were going to the end zone on that particular play,” Cowart said. “We did talk about killing (the clock), what we would do if we got a first down. But, we were all or nothing.

“We wanted to get it in the end zone. We were looking for a fade to Mike Wells. Austin (Kelly) bent it over the middle, found a little daylight over there, and made the catch.”

Said Hood of the discussion during the timeout, “I told him what play I wanted to run at first. But, we couldn’t run it because a player was hurt on the sideline. He decided to go with fades. Mike Wells was the intended receiver. He wasn’t heavily guarded right off the line. But as soon as we called the play, the safety ran over there.”

Hood took the snap and he stepped up in the pocket. He gunned an aerial to Kelly, who caught it just inside the end zone. Kelly was belted hard as soon as he caught the ball, but he held on for the score.

“I said, ‘I trust my guys.’ Chris made a spectacular play,” Cowart said. “Austin made an amazing play to finish it. You never know when a big play is going to happen. Be focused on the next snap. Our guys did a really good job of that.”

Hood took the snap, bought some time, stepped up in the pocket and delivered a strike to Kelly for the score.

“I didn’t really like my first read. I stepped up and threw the ball to Austin Kelly,” Hood said. “We knew what we had to do. We knew we had to come win our first conference game and take it from there.”

Offense wasn’t the only side of the ball Hood excelled at on Friday night. He made 10 tackles as well.

“Defensively, he was all over the place,” Cowart said. “That’s become commonplace for Chris. He’s really the guy that’s leading the charge.

“He’s our best tackler. He had two huge hits in the game that were momentum changing.”

Montour managed just 117 total yards and turned the ball over once as well.

“I think we’re doing pretty good on defense,” Hood said. “That’s what won us the game.”

Hood has rushed for 473 yards on 74 carries this year with seven touchdowns. He has completed 37 passes in 77 attempts for 429 yards with three touchdowns and five interceptions.

He made his first varsity start at quarterback in the season opener this year against Shaler.

“You’re six games in now. He’s a vet,” Cowart said of Hood’s growth. “I have no doubt that he wants to do better next week.

“Chris can make all the throws. There’s no throw he can’t make. There’s nothing in the playbook we can’t run. It’s all open. The rushing yards he had against Montour is big-boy stuff. That’s running back stuff. And he’s a quarterback.”