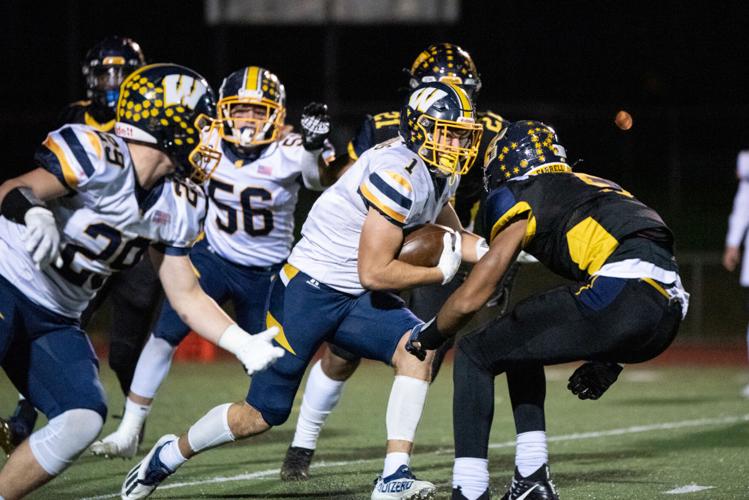 Wilmington’s Luke Edwards carries the ball against Farrell during the District 10, Class 2A championship Friday at Hickory High’s Hornet Stadium in Hermitage. 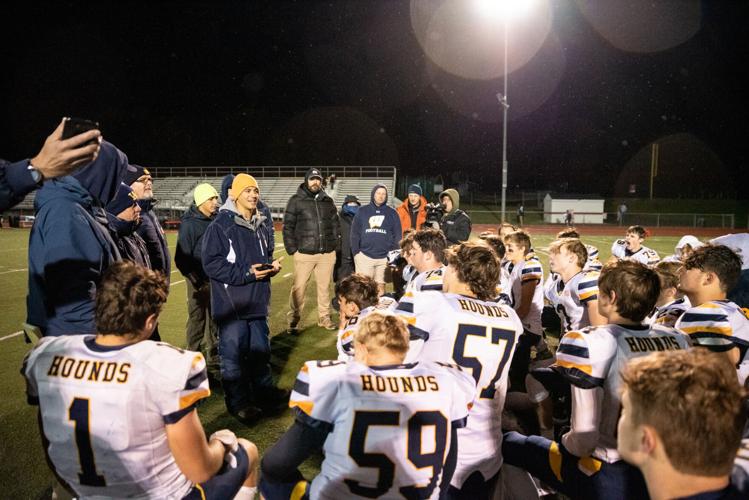 Wilmington head coach Brandon Phillian talks with his team after falling to Farrell, 48-6, during the District 10 Class 2A championship at Hornet Stadium in Hermitage. 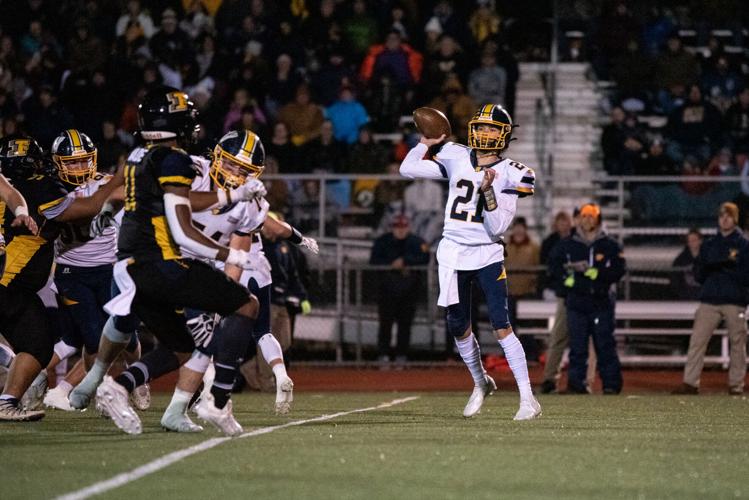 Wilmington’s Tuff McConahy passes the ball against Farrell during the District 10 Class 2A championship Friday at Hornet Stadium in Hermitage. 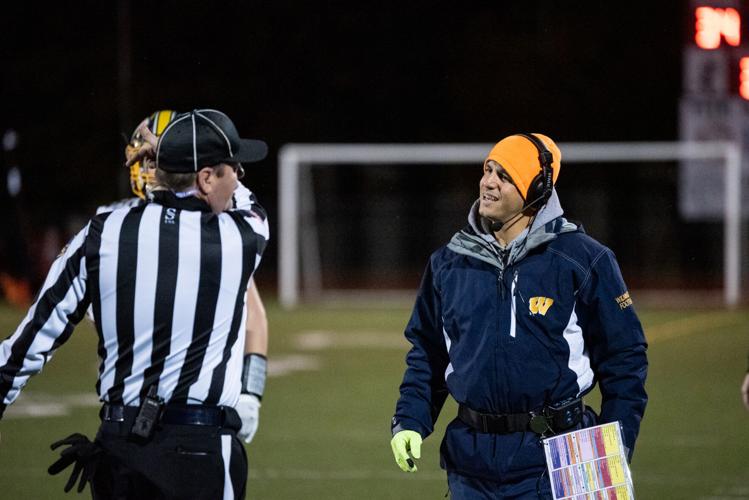 Wilmington head coach Brandon Phillian talks with an official during the District 10 Class 2A championship Friday against Farrell at Hornet Stadium in Hermitage.

Wilmington’s Luke Edwards carries the ball against Farrell during the District 10, Class 2A championship Friday at Hickory High’s Hornet Stadium in Hermitage.

Wilmington head coach Brandon Phillian talks with his team after falling to Farrell, 48-6, during the District 10 Class 2A championship at Hornet Stadium in Hermitage.

Wilmington’s Tuff McConahy passes the ball against Farrell during the District 10 Class 2A championship Friday at Hornet Stadium in Hermitage.

Wilmington head coach Brandon Phillian talks with an official during the District 10 Class 2A championship Friday against Farrell at Hornet Stadium in Hermitage.

HERMITAGE — So now the truth can be told: Anthony Stallworth running on one good leg is better than most backs with two healthy legs.

Okay, that was an exaggeration. But despite running on a gimpy ankle Stallworth still is better than most.

At Hickory High’s Hornet Stadium, Stallworth sprinted for 327 yards on only 10 totes, including 30-, 45-, 82- and 97-yard TD runs, forging Farrell High football team to a 48-6 win over Wilmington in the District 10, Class 2A championship game.

The title is the fifth in the last six years for Farrell and 17th in program history, including WPIAL and D-10 competition.

By virtue of the victory Farrell (9-0) will face Westinghouse — a 35-34 over Windber — next weekend in its PIAA playoff opener. Stallworth said he will be ready.

“We won the region, we won D-10, now we’re looking for Hershey, that’s our main focus right now,” said a more serious Stallworth, who added, “We want to be on our way to winning a state championship.”

The win over Wilmington was vindication for Farrell, which suffered three losses to the Greyhounds during the coronavirus-coerced abbreviated 2020 season.

“We thought about this for a whole year,” admitted Steelers coach Amp Pegues. “They ended our season early last year, and that was our motivation to get back here and get this D-10 title.

“But,” Pegues pointed out, “that was just number two of our goals. The first goal was the region; second was a D-10 title, and our third goal, we’re gonna go after that — try and get to Hershey and win a state championship.”

Should the Steelers accomplish that come December it would be the proud program’s third commonwealth crown in a four-year span.

“It’s a big goal for me, personally,” related linebacker Anthony D. Jackson, “because last year I lost my first playoff game to Wilmington. So, next up, we’re looking to our first-round playoff game and getting to states.

“It would mean everything to me,” Jackson said regarding a PIAA championship. “I’ve already got a ‘pinkie’ ring, and already got one on my ring finger; now all I need is one on my middle finger.”

With Kabron Smith scoring from 15 yards out and Stallworth sprinting 30 yards for a score, the Steelers assumed a 14-0 lead with 3:37 remaining in the first frame. Smith scored a 32-yard run in the fourth quarter, also.

However the Greyhounds made it interesting.

On the second stanza’s second play a muffed punt was recovered by Wilmington’s Cole McCallister at Farrell’s 1. Two plays later, Tuff McConahy’s 1-yard plunge had the Greyhounds within 14-6 just 59 ticks into the quarter.

Wilmington subsequently recovered an on-side kick, though the Greyhounds were unable to capitalize and went 3-and-out.

Farrell was backed up at its own 9 following Tyler Mikulin’s punt and a personal-foul penalty, but that only set the stage for Kylon Wilson.

On first down, Smith spun a pass to Wilson, who caught the ball at the Steelers’ 35, reverse-pivoted, then out-raced Wilmington’s secondary to complete a 91-yard pitch-and-catch. After Stallworth ran for the PAT — the play on which he injured his left ankle — Farrell forged ahead 22-6 with 7:54 remaining to intermission.

Taking a series off and having his ankle taped, Stallworth sprinted 41 yards on his first carry. Then after Marion Norris recovered a Wilmington fumble Stallworth sprinted through the middle of the Hounds’ Hammer defense 45 yards, extending the edge to 28-6 by halftime.

On his only two second-half carries Stallworth exploded 82 and 97 yards for TDs.

“Oh man, that kid’s a house. He runs hard, he runs pretty fast, do anything you want. Give him the ball, he’s gonna get it done,” Jackson said in praise of his classmate.

“He’s tough. He wanted to come back and play, and we thought we’d get him a couple more carries, and he breaks a couple long ones,” an admiring Pegues said in praise of Stallworth. “Great job! But you’ve gotta thank the guys up front. The big guys up front did their job (Fri)day. They opened up a lot of holes and he just kind of burst through untouched. But the guys up front played well.”

“That’s a really good, really talented group that I think is going to make a big-time run in the state tournament this year,” Greyhounds’ coach Brandon Phillian said regarding Farrell. “It’s an outstanding football team, and they certainly showed their skill-sets (Friday) night. They’ve got a great combination of athletes at the skill positions, size and power up front. A tip of the cap to them for the great game they played.”

Regarding his Greyhounds, Phillian said, “When I think back and reflect on this season I think I’m very proud of what our team accomplished. To win seven games and earn the right to play for a District 10 championship ... three losses, twice to a Farrell team that I believe is going to make a big-time run in the state playoffs, and one to a team (Findlay, Ohio’s Liberty-Benton) three-and-a-half hours away – a really talented, state-ranked team – on forty-eight hours notice ...

“I’m really, really proud of our boys,” Phillian continued. “I thought we faced some adversity throughout the season, uncertainty if we were playing games or we weren’t. For those guys to stay focused on our vision and battle the way they did all season long. That first game against Farrell (a 54-0 loss at Greyhounds Stadium in Week 8), I think we showed marked improvement. I’m really proud of how our guys worked and practiced all week, and am really glad with the fight they produced on the field (Friday) night.”

“Our’s is a program, we’ve got great commitment and great dedication from our players,” Phillian reflected. “I know myself and our coaching staff, we feel very fortunate to get to work with a group of young men in our community in the capacity we do. I appreciate our seniors, I appreciate their commitment, the dedication they’ve shown since the time they were freshmen. Four years in the program. I appreciate that dedication and commitment.

“You hate to see the season come to an end; it’s always a tough time. But I’m proud of the effort our guys gave on this field (Friday) night,” Phillian concluded.

For Farrell, it’s onward and upward.