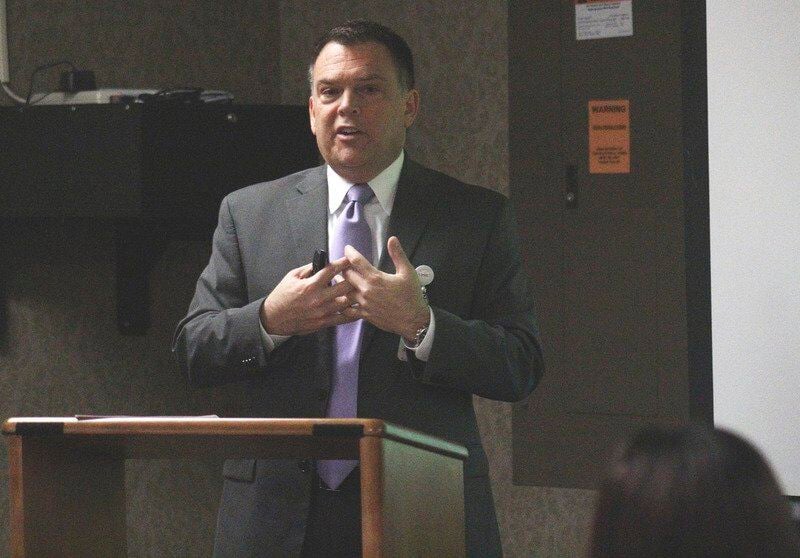 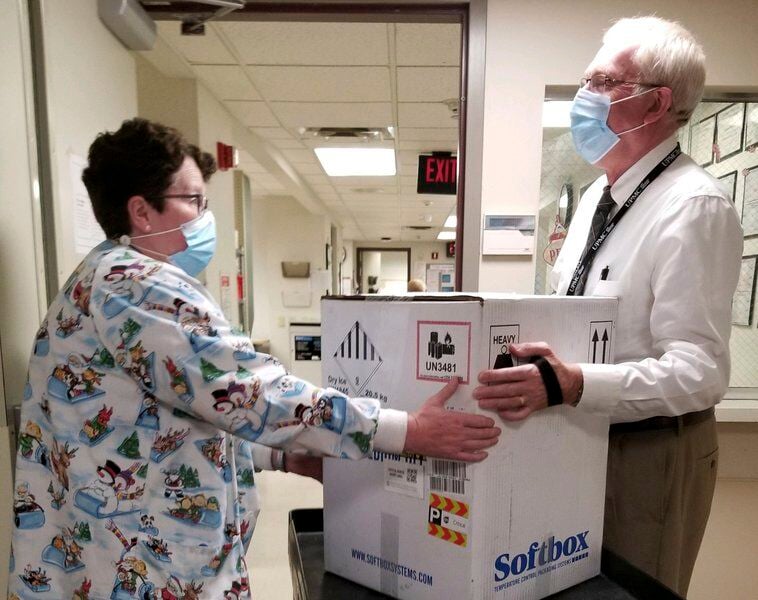 UPMC Jameson workers handle the vaccine as it arrived at the hospital.

UPMC Jameson workers handle the vaccine as it arrived at the hospital.

The past year and the COVID-19 pandemic have presented some unique challenges to local healthcare providers, but officials at UPMC are continuing to work toward both caring for COVID patients and distributing the vaccines as they available.

The first Pfizer vaccines were delivered to UPMC Horizon hospitals in Farrell and Greenville, as well as UPMC Jameson in New Castle, on Dec. 17, 2020, which started the process of getting UPMC’s frontline healthcare workers vaccinated.

In the region, the first vaccine shots were administered to five UPMC employees in front of personnel and media members at UPMC Children’s Hospital in Pittsburgh.

Later during a virtual press conference held in January, UPMC Chief Quality Officer Tami Minnier said nearly 9,000 staff members in the UPMC system — including those local hospitals in Mercer and Lawrence counties — had received two vaccination doses and were expected to have immunity to COVID-19.

When determining who would receive the vaccine, Minnier said job titles alone did not suffice; officials had to look at each employee’s job along with guidance from the state and internal prioritization.

Along with nurses and doctors who readily interact with patients, other workers such as IT employees may not interact directly with patients but still work through the hospitals and interact side-by-side with clinicians, Minnier said.

Similar to UPMC’s hospital staff, Nace said all of UPMC’s long-term care facility staff come into contact with the residents at some point, from nurses and reception to maintenance and housekeeping.

Aside from administering the Pfizer and Moderna vaccines, the UPMC system is developing its own COVID-19 vaccine, called PittCoVacc, or Pittsburgh Coronavirus Vaccine.

The vaccine was announced last April, when a paper outlining the vaccine was released by EBioMedicine, published in the British leading medical journal The Lancet.

The paper was written by Dr. Andrea Gambotto, associate professor of surgery at the University of Pittsburgh School of Medicine, and Dr. Louis Falo, professor and chairman of dermatology at the university.

The vaccine successfully underwent animal testing at the time of the paper’s publication, and the tested mice responded with antibodies sufficient to neutralize the virus.

To deliver PittCoVacc, the vaccine uses a micro-needle array, a fingertip-sized patch of 400 tiny needles that deliver the spike protein, embedded in a sugar-like substance, into the skin. The patch, similar to an adhesive bandage, is affixed to the patient. The needles, made of sugar, dissolve into the skin.

At the time, project leaders were seeking approval from the U.S. Food and Drug Administration for clinical normal trials.

Preclinical studies are progressing and the FDA is currently reviewing UPMC’s application to begin a phase I/II clinical trial in Pittsburgh.

It’s possible that PittCoVacc will be in use after much of the U.S. was able to get the current COVID-19 vaccines given with a standard needle, but UPMC’s vaccine could be used in the future if COVID-19 vaccination becomes seasonal like the flu, local UPMC spokesperson Lisa Lombardo said.

“The skin is our first line of defense against bacteria, versus viruses and other harmful invaders. Because of that, it has evolved to be very efficient at mounting an immune response,” Falo, the researcher, said.

“What the micro-needle array is able to do is deliver the vaccine antigen directly to the areas that are made to make an immune response.”

If successful, the vaccine could easily be massed-produced due to its simple design. In the university’s lab, one person could make hundreds of micro-needle applicators using mold, while PittCoVacc is shelf-safe and does not need to be refrigerated. The two vaccines approved so far must be stored at sub-zero temperatures.

But aside from the vaccine, officials at UPMC are also taking steps to avoid patients even having to visit the hospital in the first place.

The monoclonal antibodies are administered in the form of IV infusions, produced by Regeneron Pharmaceuticals and Eli Lilly and Company, and are available under emergency use authorization.

The infusions are used in non-hospitalized people who are vulnerable to complications of COVID-19 illness and infection, and distributed both through infusion centers and by bringing the IV infusions to the patients, Yealy said.

“This medication can help keep these people out of the hospital,” Yealy said.

On the other side of the spectrum, patients who are 75 years or older and require a breathing machine still suffer a high death rate of about 75 percent, Yealy said.

However, the proportion of patients seen in emergency departments that are admitted for hospital care has dropped by 25 percent when compared to last spring, while the number of COVID-19 patients who were started on a breathing machine dropped by 10 percent in that same time.

Since the spring, Yealy said overall COVID-19 outcomes had improved due to the standardization of evidence-based care, including the use of steroids and other medications to change the immune system’s response.

These treatment options were determined through a process called REMAP, where researchers could test multiple treatments simultaneously on fewer patients at a lower cost than traditional trials.

“I don’t share these numbers to downplay anything. COVID-19 poses very serious risks for many people, especially the elderly and those with underlying conditions. Any of our frontline nurses, doctors and other clinicians will tell you, this disease is deadly,” Yealy said.

However, even if someone hasn’t yet been able to receive the COVID-19 vaccine, Yealy said performing several measures can prevent catching COVID-19 and further need for medical attention.

These tips included wearing a mask that covers your nose and mouth, practicing physical distancing and avoiding congregations outside of immediate family, and rigorous hand washing.

“These simple steps are your vaccine,” Yealy said. “We know these work, and these are the measures that work.”