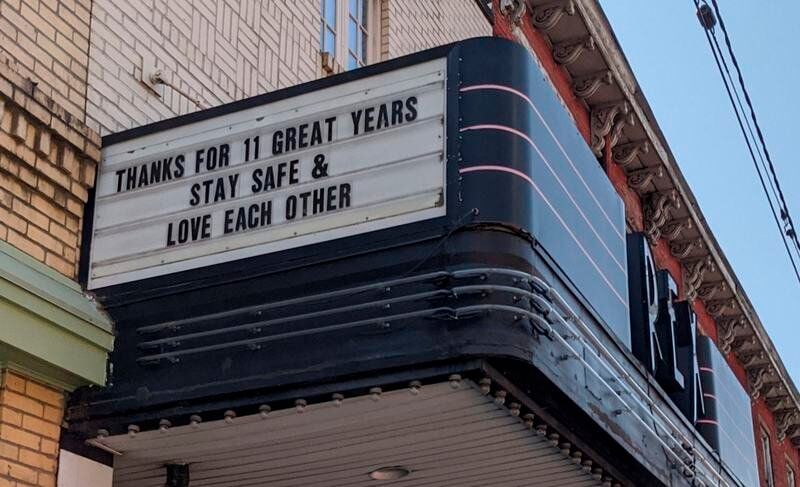 The Rex Theater announced it was closing in September. 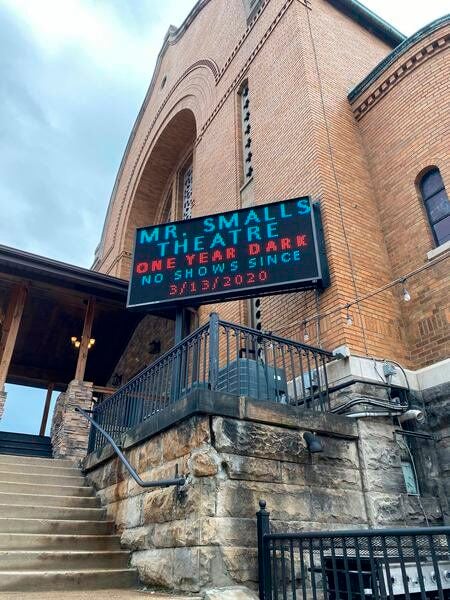 A sign outside of Mr. Smalls Theater after a year of no shows.

The Rex Theater announced it was closing in September.

A sign outside of Mr. Smalls Theater after a year of no shows.

PITTSBURGH (AP) — This past autumn, the lights went out for good at The Rex Theater, one of Pittsburgh’s most-beloved rock clubs.

Like many independent venues across the United States, the South Side stage fell silent earlier in 2020, when the coronavirus pandemic shuttered the live music industry without warning.

But on Sept. 22, The Rex — after years of fostering the local music scene — announced it would not reopen. It joins other local sites such as Brillobox, Howlers and Mixtape in Bloomfield and Hambones in Lawrenceville that have shut their doors for good.

Cattivo in Lawrenceville is for sale, according to Drusky Entertainment, a Pittsburgh-based concert promoter.

The coronavirus pandemic has hit the live music scene hard nationwide. Live music performances all but stopped, and the industry is still reeling from the effects.

For musicians, the choices have been to either take an extended break or innovate. The Jakob’s Ferry Stragglers, based in the Mononghaela River Valley, started livestreaming in the early days of the pandemic from their Stockdale living room with just an iPhone. What started out as a way to earn some tips turned into an opportunity to connect with a larger audience, allowing the band to take bluegrass music to a new generation of fans.

While the power of live music remains in the hearts of many, the future for the live music industry is uncertain.

The past 12 months without live performers on stage has affected Ron Esser. The owner of Moondog’s Pub and Starlite Lounge in Blawnox, Esser said he will “never, ever take in-person music events for granted.”

“We have to see who survives all of this,” Esser said. “Some of the musicians are older. I wonder if we will ever see someone like Donnie Iris play live again. And on a national level, what about bands like the Rolling Stones? It hurts to see everything that is happening. I can’t wait to get back together and to see everyone and hang out with everyone.”

Musicians and supporters created a “Save Moondog’s Virtual Benefit Concert and Fundraiser” for March 26-28.

An organizer of “Save Moondog’s” is John Vento of West Deer. He and Esser are friends who formed Band Together Pittsburgh, a nonprofit that provides programming musical experiences and vocational opportunities for those on the autism spectrum.

He said he thinks many venues won’t be able to make a comeback. The Rex Theater on the South Side was a huge part of the Pittsburgh music scene, Vento said, and its closure makes him sad.

“When a venue closes, it’s not just the venue,” Vento said. “It’s the musicians and the servers and the bartenders and the people who come to the shows who will be affected.”

Esser (whose nickname is Moondog) was against the fundraiser, but Vento told him he is looking at it the wrong way.

“People want to help because they don’t want to lose this another great music venue,” Vento said.

He wasn’t eligible for any Paycheck Protection Program money. He has a five-year lease.

“We host smaller bands and before COVID, we were booming,” said Vento. “Virtual music is like a virtual hug. It’s not the same. Live music connects you with the audience. You literally feel the connection.”

Dick Gainor, of Arnold, vocalist and bass player for oldies band American Pie, said the group can’t wait to get back on stage. The band used the time off to learn some new old songs.

They normally have 30-35 shows a year. They did seven in 2020. They have nine scheduled for this year, which includes the summer concert series planned to open in June at Tarentum’s Riverview Memorial Park. Before that series, the group is scheduled to play at 4 p.m. May 1 at that park.

“We want to give people a chance to get out of the house,” Gainor said. “People miss that.”

Esser agreed that people miss it so much, he wonders if there will be enough venues and gigs for all the musicians and bands trying to make a comeback after being shut down so long.

Anthony “Rocky” Lamonde, of Swissvale, is producer of “SOS PGH 2020 Concert Series,” a virtual four-week event featuring local bands and highlighting people behind-the-scenes, to help raise money for people such as Esser. The concert series will host a second season beginning at 6 p.m. April 8. Genres will include blues, jazz and heavy metal.

“We know Ron is struggling,” said Lamonde, of the Borstal Boys. “We want to help him and so many others like him. Ron is the kind of guy who if you give him money he will give it to someone else in need.”

The next show for Ray Voller, the vocalist and guitarist from The Jentz Band, is on March 20 at Edgewood Winery in Spring Church, Armstrong County. He said they did one private virtual event and one outside gig during the pandemic.

Voller, of Buffalo Township, remarked that one difference of life during the pandemic has been if his family asks him to do something, he has had time to do it. In the past, he would have to check his schedule to make sure he didn’t have a performance that day.

“We want to play again so people can dance,” Voller said. “Things are starting to reopen. We’ve gotten some performances lined up. We are playing outside to help with social distancing.”

Voller said he has noticed changes in the management of who they talk to about scheduling gigs. Some of those jobs have been eliminated.

The industry is evolving, said Brian Drusky, owner of Drusky Entertainment. He is a PA precinct captain for the National Independent Venue Association (NIVA) along with Drusky’s marketing manager Adam Valen, of the South Side.

NIVA’s mission is to preserve independent venues and promoters throughout the U.S. The association also helps venues with information about applying for grants.

Drusky said venues are working to make changes to host events. That might include utilizing their space differently to allow for social distancing or opening a kitchen to be able to serve food with alcohol and not just be a bar, or making use of any outdoor areas.

Most businesses still struggle financially in this industry, no matter what they have been trying to do, Valen said.

Valen said the need is for a $15 billion industry relief package across the country for these closed venues. Valen said they’ve lost count of how many venues nationally have closed. Billboard has compiled a list.

“And we know there are more coming,” Valen said.

Drusky said the music industry is looking toward reopenings on a more regular basis by the fall. But it may come quicker with President Joe Biden’s pledge to have a complete vaccine supply by the end of May.

He said in the meantime, they’ve been planning events at drive-ins and other outdoor spaces. They have lined up some indoor locations.

Valen and Drusky said that many venues rely on national events.

“You don’t know what you have until it’s gone, we all realized that with the pandemic,” Drusky said.

He said he was listening to a radio show where people were asked what they want to do once the pandemic is over and about two-thirds said they planned to go to live music again.

Valen said it is easy to build a case for how meaningful live music is to communities.

“It’s such a communal place where people can put their worries behind, ignore distractions, and come together to enjoy something so universal,” Valen said.”

Drusky said his business went from “being promoters to talking to the government and learning about grant writing, and learning how to survive this pandemic.

“We have all banded together on a local and national level, and this has brought about relationships that wouldn’t have been there pre-pandemic,” Drusky said.

“Our industry is so unique and has been so uniquely impacted. It’s really pushed us to collaborate, share resources, and just survive this together,” Valen said.

Liz Berlin, founder and musician with Rusted Root and co-owner of Mr. Smalls Theatre in Millvale, said they are doing their best to remain optimistic. They have continued with ongoing construction projects.

She said with the loss of business overnight, they were forced to take out an economic industry disaster loan. Monthly expenses are $10,000-$12,000.

They plan to reopen Mr. Smalls Café but aren’t sure if there will be enough people dining to make it profitable. One of the things they tried was the Mr. Smalls Street Series for outdoor live music. She said it didn’t make money, but they felt it was a way to unite and provide opportunity to the music community, the staff and patrons.

The plan is to bring some music back this spring.

Berlin said owning the building is the only reason they’ve been able to survive so far.

“There is no telling when the live music industry will return to normal or when patrons will even feel comfortable attending events once we’re cleared to hold them,” Berlin said. “We have lost everything we’ve worked for and those of us who make it through will be starting again, not from scratch, but from a severe disadvantage, having to dig through a mountain of debt acquired just to survive, while at the same time rebuilding the trust and patronage of our customers from nothing.”

The Save Our Stages Act was passed as part of a COVID-19 relief bill in December to help with funding for local venues. Berlin said the act led to Shuttered Venue Operators Grants (SVO). Berlin said she is acting as if they won’t get a grant because she isn’t sure how long it might take. It also won’t solve the whole problem.

“Mr. Smalls Theatre has sat empty now for coming up on a year and the only relief in sight is still at least three to four months away,” Berlin said. “We are running on fumes.”