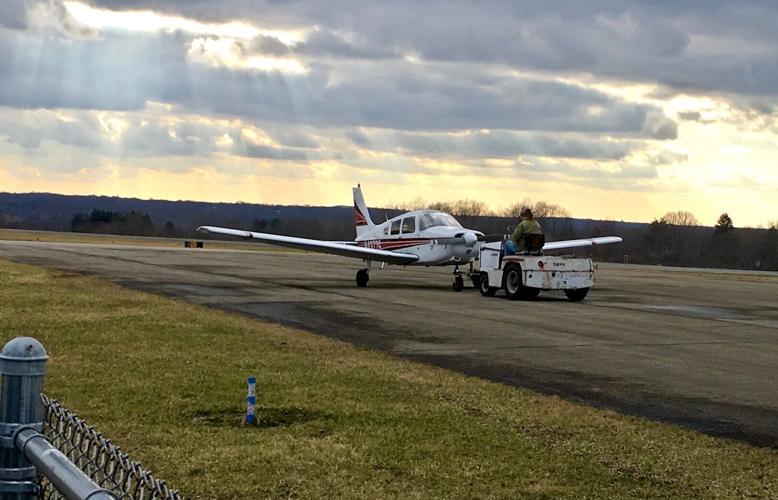 A privately owned plane is towed toward the garage at New Castle Municipal Airport for refueling and repairs. 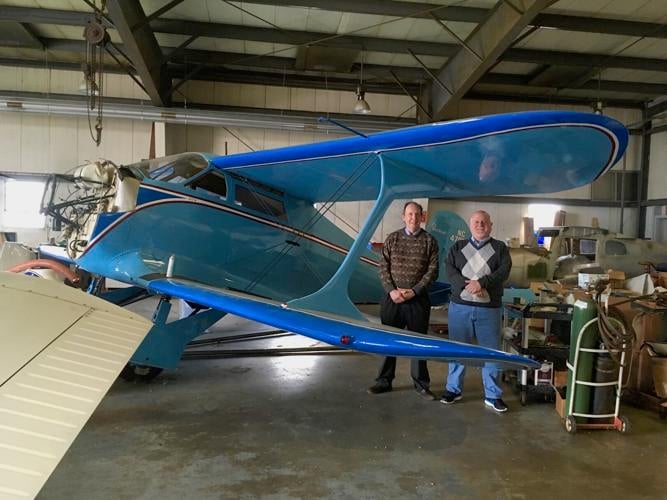 A 1936 Beach Stagger Wing bi-plane is undergoing remodeling inside the garage of the New Castle Municipal Airport. The plane served as an executive transportation craft in the 1930s. Standing under the wing are airport manager Marty Haski, left, and James Farris Jr., chairman of the county airport authority.

This aerial view of the New Castle airport shows the existing airport terminal in red and the proposed new terminal and expansion in blue. 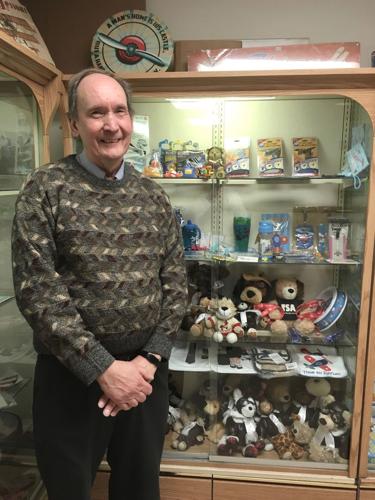 Airport manager Marty Haski stands next to a display of someo of the many aviation-related items available from the airport’s online store, SkySupplyUSA.com, which sells pilot supplies, aircraft parts and collector items.

A privately owned plane is towed toward the garage at New Castle Municipal Airport for refueling and repairs.

A 1936 Beach Stagger Wing bi-plane is undergoing remodeling inside the garage of the New Castle Municipal Airport. The plane served as an executive transportation craft in the 1930s. Standing under the wing are airport manager Marty Haski, left, and James Farris Jr., chairman of the county airport authority.

This aerial view of the New Castle airport shows the existing airport terminal in red and the proposed new terminal and expansion in blue.

Airport manager Marty Haski stands next to a display of someo of the many aviation-related items available from the airport’s online store, SkySupplyUSA.com, which sells pilot supplies, aircraft parts and collector items.

Lawrence County and New Castle airport officials are spreading the word to businesses and industries, that the skies over New Castle are friendly and open for business.

This seemingly quiet hub of an airport serves many purposes, and in fact, sees nearly 45,000 take-offs and landings a year, from recreational to privately owned planes to small corporate jets.

On rare occasions, it serves an important purpose as a hub for transporting donated organs for transplants.

“It’s not so common that it happens all the time, but enough that it’s significant,” James Farris, chairman of the New Castle Airport Authority, explained. Farris also is a deputy coroner.

“Often it’s corneal tissue or skin that is flown directly out of New Castle, especially if it’s going farther than Pittsburgh or Cleveland,” he said. “Otherwise, they are flown by helicopter right from the hospitals. But in extreme situations, there might be heart flown to a destination city. If you’re taking multiple organs, they fly the whole body in some cases.

“Its all about timing, Farris said. “Think of the lives that are benefited just by that.”

And it’s not only air flights that are involved in this busy operation that has existed for 94 years. The New Castle Municipal Airport also has grown through the decades to offer plane repair and servicing, flight instruction, hangar rental — currently for 59 airplanes based there, flight lessons and testing, and an online air shopping business. It also serves as a heliport for emergency helicopter landings, to fly people who are critically injured or sick to larger hospitals.

“The public needs to understand how significant the airport really is,” Farris said, emphasizing that the plans are to keep it growing.

The airport also has the unique advantage of a crosswind runway, which allows air flights regardless of most weather conditions.

The airport’s planning and operations are overseen by a seven–member airport authority, appointed by the county commissioners. The board is comprised of volunteers who have a vested interest in flight and the operations and they are constantly planning for new improvements and seeking federal and state funding to make them happen.

In addition to those projects, a new movement being led by the county commissioners is to land funds from various other state and federal funding streams to allow other expansion projects as incentives for economic development in the county.

The commissioners gave the airport $150,000 earlier this year as seed money to attract more grant dollars and carry forth those improvements.

The first phase, already on the drawing board, is the renovation and expansion of the 55–year-old air terminal, to possibly include a restaurant with a terrace for outdoor dining and seating and lounge on the rooftop, meeting rooms and banquet facilities and educational space for possible use as a site for a community college flight school.

“The new terminal will be a stand-alone building and will have a great view of the runways,” he said, and the existing building will remain for other uses.

Farris anticipates construction of the terminal will begin within the year, and will be completed by the end of 2023.

Phase two will be to lengthen the primary runway, making up for a five-foot length discrepancy identified by the FAA, Farris explained. An aerial measurement of the runway length conflicts with long-existing ground surveys, and that runway actually comes up that much short, he said, but the actual plans are to lengthen the stretch by about 400 feet, to FAA specifications, to allow for greater and more efficient cargo operations. That phase conceivably would be done by the end of 2025, Farris said.

Boyd anticipates the first two phases would be done “expeditiously,” pending the availability of state and federal dollars.

Phase three would involve extending the primary runway even longer to 3,995 feet, to accommodate larger aircrafts. That runway would be lengthened to longer than 5,000 feet, Farris explained.

“But without phase three, we can still achieve what we need to do,” he said, noting that the intent is not to bring in commercial airlines, but ultimately to provide better runway access and accommodate larger corporate and cargo-sized aircraft.

Farris identified cargo as the transport of any materials or products made locally that are being shipped out or distributed through industrial or commercial businesses, or goods and products that need to be shipped in to them.

The airport as it exists can handle cargo on a small scale, “but we want to take it to a larger scale,” Farris said. “It will give more viability to an area promoting economic development in the entire region.”

“The commissioners have identified the airport as vital to economic development,” Farris said. He touted the airport as being the only local airport in the state that operates without the aid of municipal funding.

“We want to invest to promote future self-sustainability,” he said.

Haski pointed out that the airport has nearly 400 acres of land, with a lot of road frontage, and it has the potential for moderate commercial development.

The common thread for all three is making the county’s position ideal for transportation and freight, he said. “We’re expecting heavy investments in these areas to promote economic development, and the airport is truly a reflection of the community.”

The hope is that the airport improvements will spur other growth and development on and around the airport grounds, he said.

“We have been in touch with a number of developers to try to get someone to build warehousing space on airport property,” Boyd said.“We want to turn the airport into a hub for logistics operations.”

The airport is the headquarters for Haski Aviation, a fixed-base operation managed by Haski, which offers flight school, a maintenance department to service local aircraft, fuel sales and an online store called SkySupplyUSA.com, that sells pilot supplies including headsets, aircraft parts, flight tools, sunglasses, flight bags, and a variety of aviation-themed collectibles, gifts and toys.

Haski is a designated pilot examiner on the premises as one of four in western Pennsylvania. He additionally conducts knowledge exams for the FAA.

The Community College of Beaver County has about 4,500 students enrolled in aviation programs for professional pilots and air traffic control.

“We do testing for those students,” Haski said, adding, “we do literally hundreds of tests per year.”

And when pilots and passengers land at the airport with no transportation, the airport provides a crew car to take people to their motels or local restaurants at no cost. There also is a connection with Enterprise and Hertz vehicle rentals.

The airport also runs operations of takeoffs and landings about 24 hours a day, Haski said. He noted that corporate travel had been receding largely because of COVID-19, but is now on the upswing. The airport’s economic impact is estimated at $6 million a year.

Haski explained that the airport is required to update its master plan every 10 to 12 years, and it must be approved by the FAA and PennDOT. The authority is in the middle of that now.

“It’s your blueprint for the next 10 years,” he said, adding, “These are great times, and you want to be prepared for the future now before it happens. The airport is truly a refection of the community.”

According to a history that Haski provided, the airport property was acquired in 1928 by late aviation enthusiast D. Roy Bradford. Bradford sold his interest in the land in 1932, and Findley C. Wilson, who lived in Slippery Rock Township, took over the airport’s management in 1934, and he built several new hangars and bought additional land. His wife, Maxine “Mickey” Wilson, became a pilot, and in May, 1938, she was the first woman from Lawrence County to undertake a solo flight.

During World War II, Findley Wilson trained more than 2,500 local college graduates for flight duty with the Navy and Army. He ran the airport until he and Maxine moved to Florida in the late 1950s, when he sold his interests and the city became the airport’s sole owner.

New Castle native Frank J. Farone, a local pharmacist and former Army Air Corps aviator, took over managing the airport in 1960. The airport authority was formed in 1956, and Farone served on the authority until 1985.

The mission and scope of the airport has always been to serve as the air transportation gateway to Lawrence County, according to the history sheet. Airport users pay all the costs of its operations and today, it is considered one of the best examples of government and private enterprise working together to deliver a community service at no cost to the city or county taxpayers.