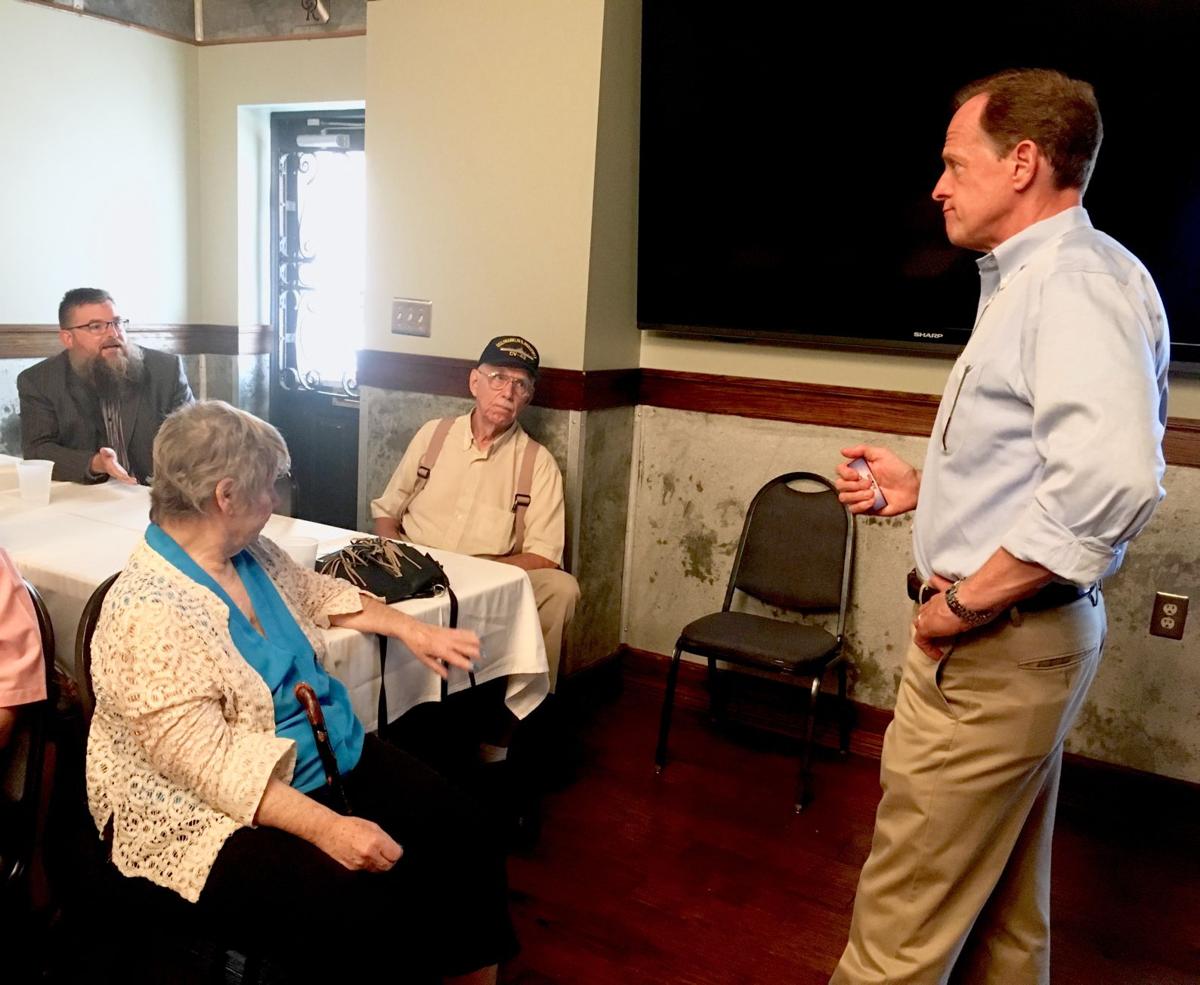 Republican Senator Pat Toomey listens to the concerns of a local resident Monday afternoon at The Crane Room on Wilmington Road during a stop on his campaign tour. 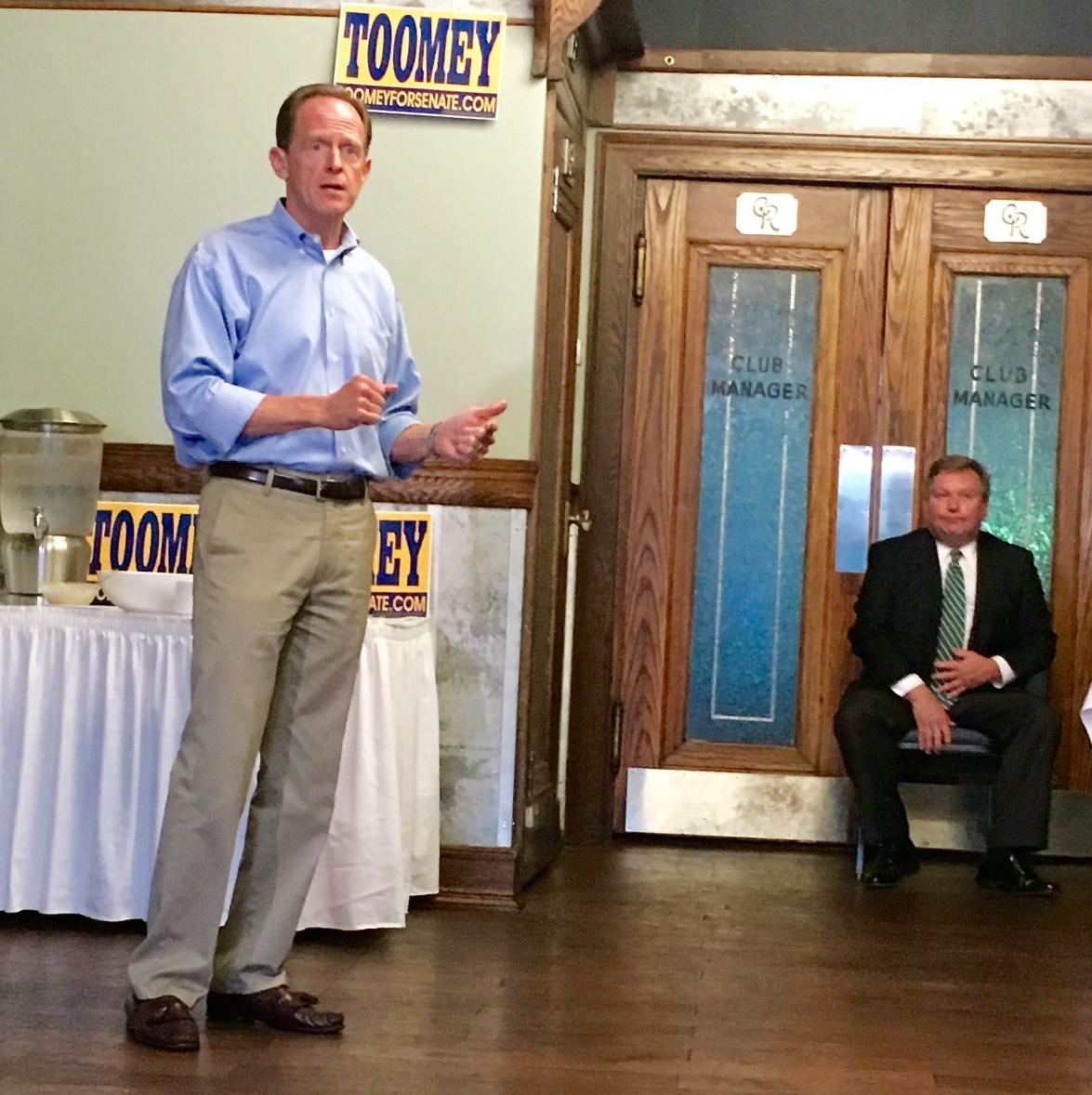 U.S. Senator Pat Toomey talks to about two dozen people at The Crane Room in Neshannock Township during a July visit to Lawrence County. 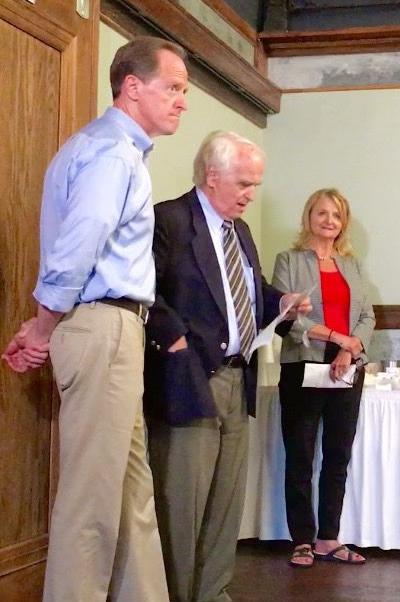 Republican Senator Pat Toomey listens to the concerns of a local resident Monday afternoon at The Crane Room on Wilmington Road during a stop on his campaign tour.

U.S. Senator Pat Toomey talks to about two dozen people at The Crane Room in Neshannock Township during a July visit to Lawrence County.

Sen. Pat Toomey spoke to a crowd of nearly 25 county residents Monday afternoon, telling them that the nation must "stop the madness."

Toomey, who is campaigning in what experts have called "the race of his career"  to hold onto his Senate seat against Gov. Tom Wolf's former chief of staff, Katie McGinty, stopped by the Crane Roome Grille on Monday.

The audience of community members included local and state Republican Committee member Dick Flannery, Neshannock Township supervisor Leslie Bucci and Lawrence County Commissioner Dan Vogler. The campaign stop was hosted by the local Republican Committee and Gale Measel, who was represented by his wife, Valerie. Measel is serving as an alternative delegate at the GOP Convention this week in Cleveland.

"Folks this is madness," he said. "I am so furious of the people who have chosen to spread a false narrative for law enforcement."

The senator said that an "unfair, wrong" narrative placed upon law enforcement departments nationwide has bred "environments for violent attacks." He expanded his claims, expressing his views on sanctuary cities and federal gun ownership laws.

Toomey said he has pushed aggressively against sanctuary cities, policy, he noted, that McGinty has supported. Earlier this month, a bill proposed by Toomey that would have rejected federal grant monies to sanctuary cities was cut off by Senate Democrats with a 53-44 vote, seven vote shorts of being presented to the floor.

"A special policy in favor of someone who is here illegally?" Toomey said Monday. "How many more times do we need to see these types of attacks before we start taking homeland security seriously?"

He continued that in many respects, he believes Pennsylvania is in a critical position of identity, as he believes he and McGinty cannot see eye to eye on security issues.

"Katie McGinty and I are probably the most contrasting candidates in the country right now," he said.

Toomey went on to discuss his stance on gun-purchasing regulations and background checks, saying he is a staunch supporter of the Second Amendment.

"I have a perfect track record with the NRA," he said.

Toomey co-sponsored legislation in 2013 alongside Sen. Joe Manchin, D-West Virginia, that sought to expand instant background checks for commercial gun purchases in wake of the Sandy Hook tragedy, but the bill fell short.

In June, the Senate stopped a bill proposed by senators Chris Murphy, D-Connecticut, Cory Booker, D-New Jersey, and Charles Schumer, D-New York, that not only would have required background checks for commercial purchases, but also for private transactions, including those at gun shows and online. Both Toomey and Manchin voted against this expansion.

"I am absolutely unwilling to diminish law-abiding citizens' Second Amendment rights.  But I think a three-minute background check is very reasonable thing.