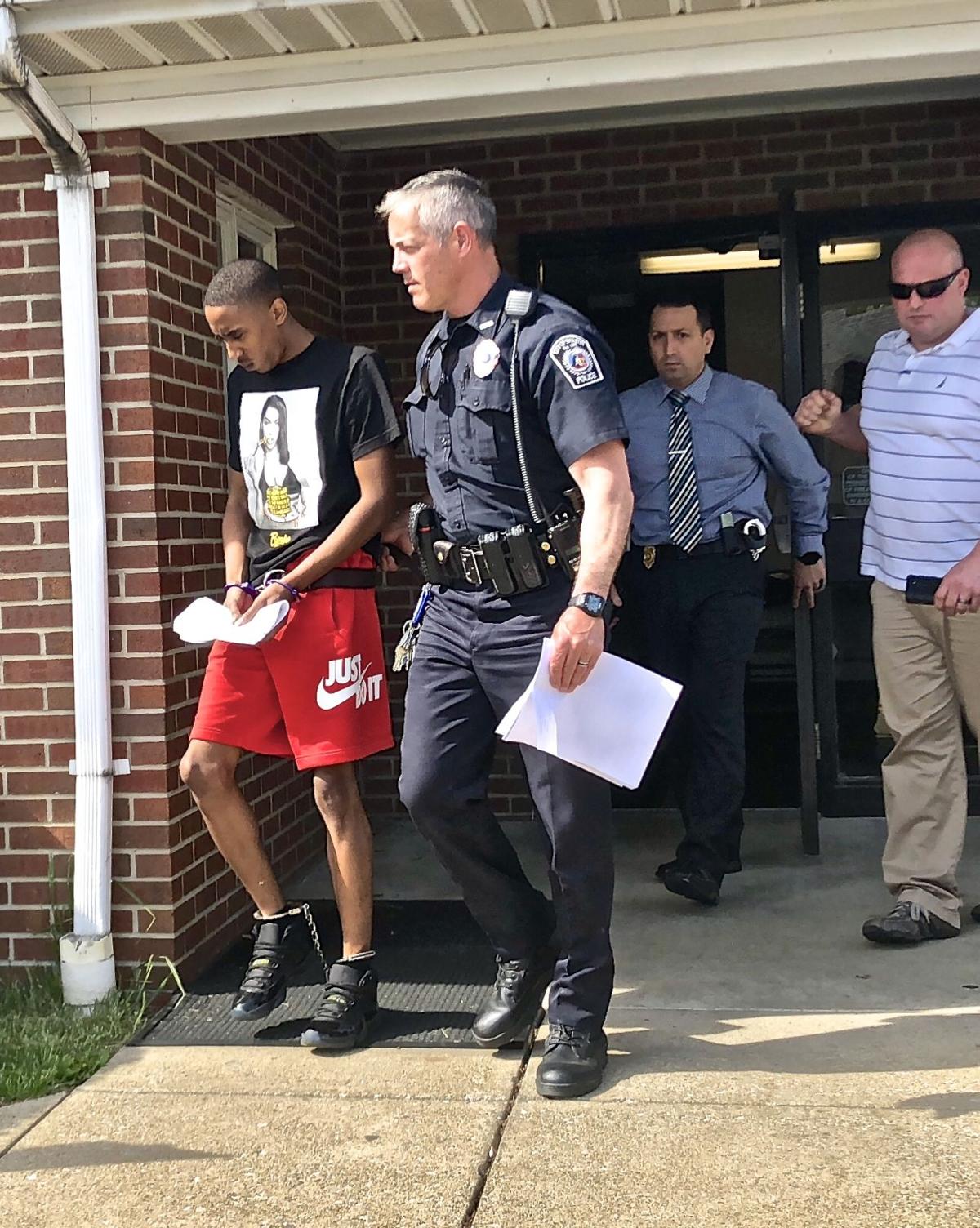 Marcel L. Steward is led to the patrol car of Patrolman Joseph Gaston after his arraignment at District Judge Dennis Songer's court in May 2018. Gaston chased the suspects' car from Sharon to New Castle at speeds upwards of 100 mph. 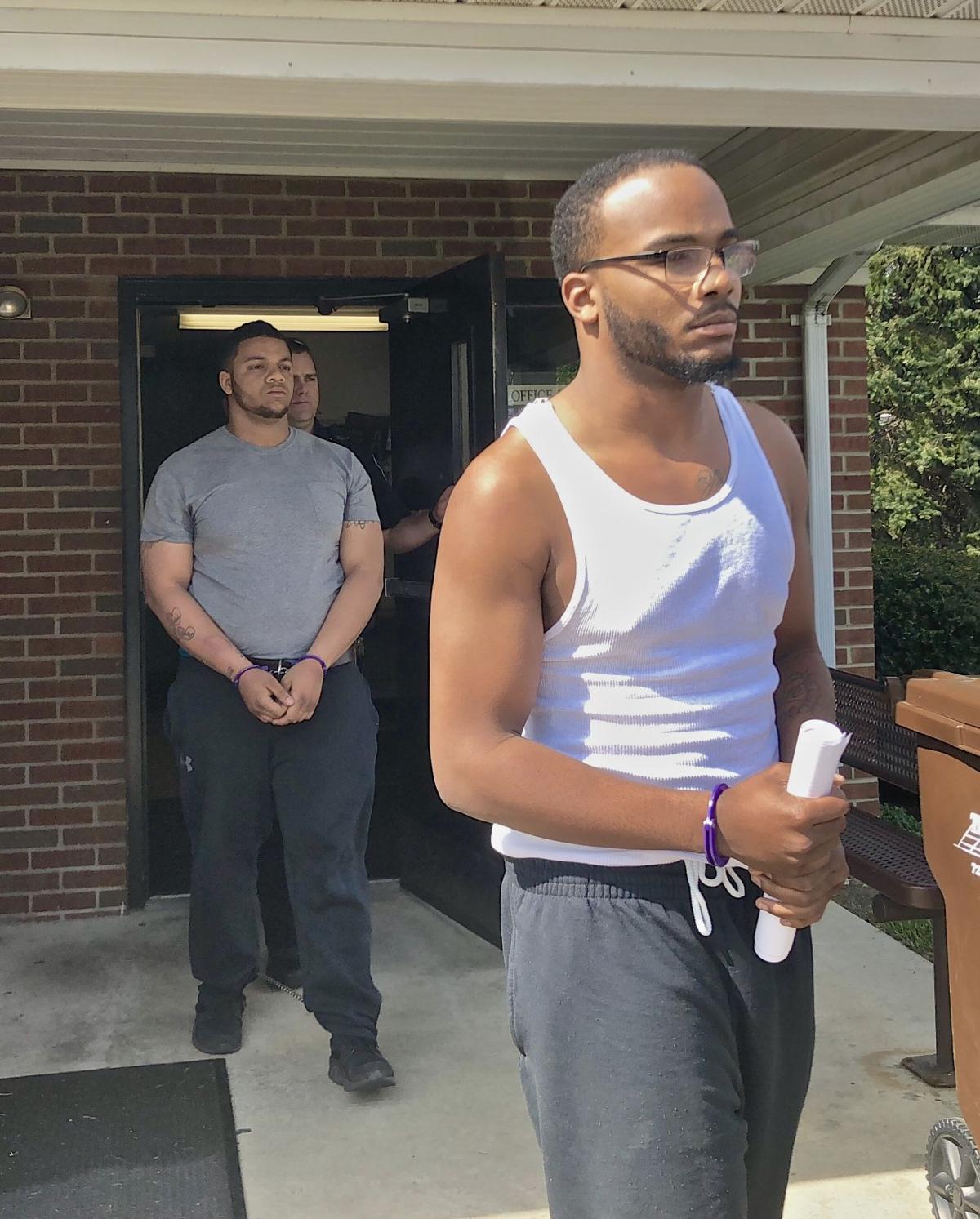 Marcel L. Steward is led to the patrol car of Patrolman Joseph Gaston after his arraignment at District Judge Dennis Songer's court in May 2018. Gaston chased the suspects' car from Sharon to New Castle at speeds upwards of 100 mph.

MERCER – Four New Castle suspects pleaded guilty to aggravated assault and related charges in connection with a May 2018 drive-by shooting in Sharon that injured a man.

Sharon police said the incident started as a domestic dispute and escalated into a drive-by shooting and high-speed chase to New Castle. A Sharon man was shot in the chest during the incident and taken by private vehicle to Sharon Regional Medical Center. He was transferred to an Ohio trauma center and recovered.

In exchange for prison time, D'Amonte C. Bell, 20, and Marcel Steward, 20, pleaded guilty Tuesday to charges of aggravated assault, burglary and conspiracy to commit the crimes and possessing a firearm without a license.

Bell, whom police believe was the shooter, will to serve four to eight years in prison in exchange for his plea.

Steward agreed to three to eight years in prison in exchange for his plea.

Delaughn M. Searcy, 24, the driver, pleaded guilty Monday to charges of aggravated assault, burglary and conspiracy to commit the crimes, possessing a firearm without a license and fleeing and eluding. He will serve five to 10 years in prison. Searcy has a prior criminal record and pending charges for arson in Lawrence County and a federal indictment.

She pleaded guilty to making terroristic threats in the case and will serve one year less a day to two years less one day in Mercer County Jail. Acker said the prosecution had no objection to giving her work release privileges.

He said the plea agreements will save the prosecution from the unknowns posed by a trial, which was supposed to take place this week.

"In all these cases, you always have witnesses with conflicting stories and some have prior crimes that can be used at trial to impeach them," Acker said.

He said the pleas were all reviewed and approved by the Sharon police. Assistant District Attorney Greg Reichart worked on the case.

According to an affidavit, police were called at 8:34 a.m. May 8, 2018, to a fight at 825 Spruce Ave. in Sharon, where Donelle Searcy was arguing with the victim, who is the father of her child.

Steward told police that Donelle Searcy called her brother to say she was fighting with the victim and that she "wanted something done about it."

Steward said she gave her brother directions to the Sharon residence and remained on the phone as the three men traveled to the home to see what was going on.

Shortly after that, Donelle Searcy parked her car across the street from the Spruce Avenue house, a witness told police.

The men started yelling and banging on the door to the house, threatening to kill the victim, according to the report. The witness said three men, one of them holding a handgun, charged the door, but the victim was able to close and lock it, keeping them out.

The three men left in one car, and Donelle Searcy left in another, the witness told police.

When the homeowner went outside to see if the men were gone, he told police he heard tires screeching and saw the black car. The witness said a man in the front passenger seat was pointing a handgun out the window. He ducked and heard one shot, but immediately heard screaming in the house, according to police.

The witness said he saw the victim clutching his chest, saying he was shot. He applied pressure to the gunshot wound and drove him to the hospital.

Meanwhile, Sharon Patrolman Joseph Gaston, who responded to the scene, saw a black Volkswagen speeding away from the house, according to the police report. Gaston tried to stop the car with lights and siren, but it was moving recklessly, passing vehicles in the grass and disregarding traffic laws.

Gaston chased the vehicle through Sharon, Farrell, Hermitage and West Middlesex before continuing onto Interstate 376, where it hit speeds upwards of 100 mph, police said.

The chase ended shortly before 9 a.m., when the suspects were boxed in by Gaston, Shenango Township, Hermitage and state police at Halco Drive, a housing project area on the west side of New Castle, where the suspects were detained peacefully, according to the report.

Acker said this case has clogged up the county's trial list for six months.

"We're trying to resolve and move cases," Acker said. "I'm very hands on and I work very closely with the police and the (assistant district attorneys)."