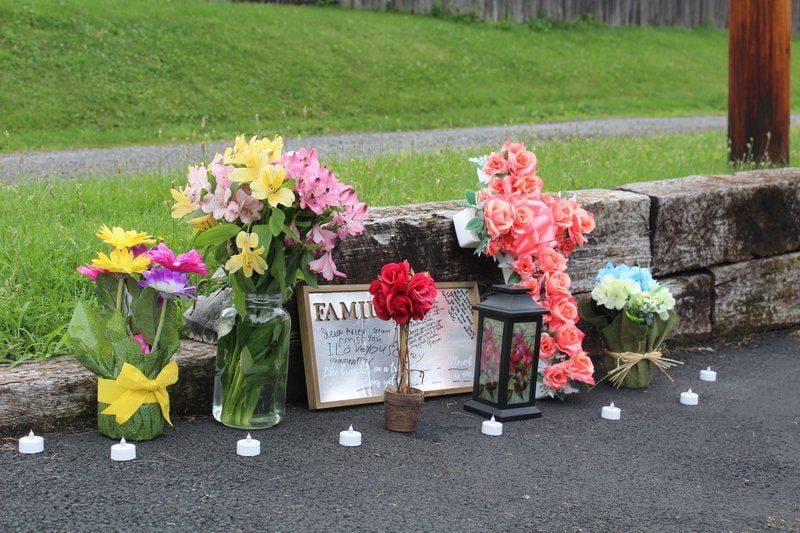 A memorial of flowers and candles sits at the back of a parking lot next to Scustie's Super Pizza at 1101 Highland Avenue where 17-year-old Darren Jevcak was killed Friday. 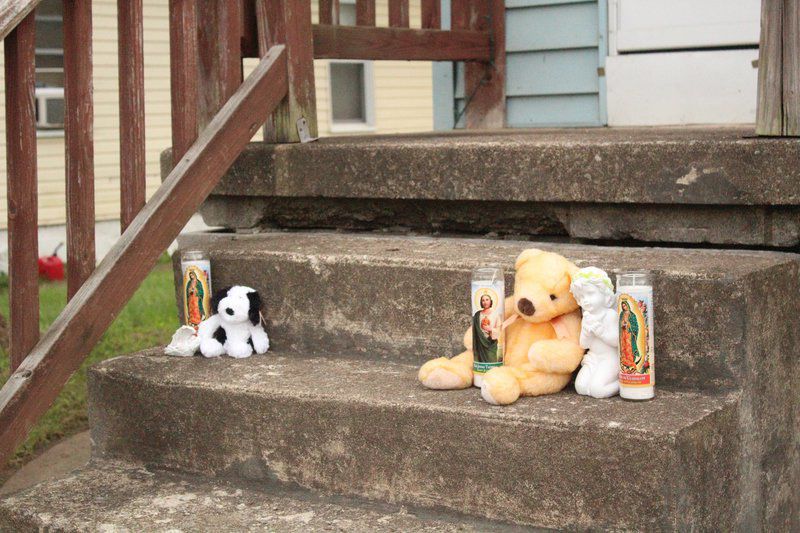 Candles and two stuffed animals sit on the front steps of 60 High Street in Union Township where 8-year-old Markie Mason was killed July 8. 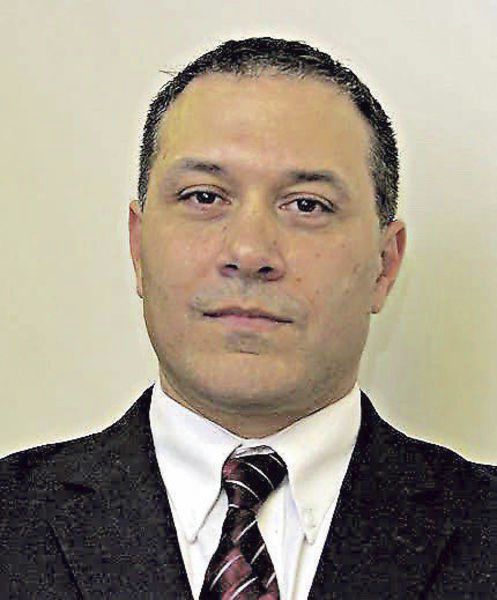 "These acts of violence in the past two weeks in New Castle and all of Lawrence County ..." he said. 'In all the years that I have been a police officer, I have never seen so much senseless violence."

Friday's slaying of Darren Jevcak, 17, shot outside his Highland Avenue place of employment, was the third youth murdered in Lawrence County in the past two weeks. At least six deaths occurred in the county since July 1.

Salem said he doesn't think the recent heat wave had anything to do with it.

Salem, who has been a police officer for 24 years, said he does not recall a two- to three-week string of violence like the past few weeks ever in the county.

"You see spikes and valleys In your career. You can remember cases, especially when kids are involved."

He noted that the city had a triple homicide last year involving the deaths of three young men. "That gets seared into your brain." he said.

He noted that each of the recent incidents was different.

"But in the end, it's a senseless loss of life of our youth for no reason at all," he said

Recent deaths include the stabbing of 8-year-old Mark Edward Mason in Union Township on July 8, allegedly by Keith Burley Jr., who fled to Youngstown. Burley was extradited back to Pennsylvania and is charged with homicide, two counts of aggravated assault and kidnapping, three counts of terroristic threats, four counts of recklessly endangering others and one count of simple assault.

On July 11, 12-year-old Jazmyn Keller was shot by her mother, Melanie Keller, 48, who started a fire to burn down their Old Plank Road house in Neshannock Township before shooting herself.

On July 17, two men were shot on Bryson Mill Road, Shenango Township. Brian Eisenhuth, 23, was dead at the scene. Ronald Lantz Jr. 24, was also shot. Police have yet to identify a suspect.

On July 19 Darren Jevcak, 17, was shot and killed outside his Highland Avenue place of employment. His girlfriend's father, Michael D'Biagio, 41 of Beaver Falls, has been charged.

Salem includes in the string of violence the death of Alissa Jones, 19, who died three days after she was hit by a tractor-trailer in West Pittsburg. The driver left the scene.

"The last one was not classified as violence but it was still a senseless tragedy," Salem said.

He noted that while not all of these incidents took place in New Castle, his officers responded to several.

"This is extremely hard on the officers. We all have kids," he said adding, "These calls hit home and stick with you when are kids involved."

The New Castle police department has chaplains available to speak with officers who need to talk.

"We have utilized them sometimes, maybe not as often as we should, but someone is available for us, for officers, and for the public if tragedy occurs."

Salem noted that all of the recent incidents were separate, isolated events.

"When you look back, these are not things we could have planned for," he said. "This was not gang violence that we could have put extra resources toward. These were random acts of violence that is almost impossible to predict that would happen. That makes it more frustrating for us. There is not much we can do. We want to stop it but these crimes are hard, almost impossible to predict.

"You can't take measures to stop individuals who made senseless, stupid decisions for no reason."

Not even all of the incidents were linked to domestic violence.

"When we go on domestic calls, we can recommend going to a shelter. Protection From Abuse orders can be an effective tool to keep a person away if violence is involved. PFAs won't protect you all of the time but they let us know what is going on so we are aware of it . If there is a violation we can get the person off the street."

"It's good for both us and for kids to see that we're not the enemy, we're their friends and positive role models," he said. He noted that is it good for the officers to get to know the local children. In addition, the kids who are part of the running club remember the officers as they get older.

Due to the randomness of the recent events, Salem said there is no pattern and no way to predict if or when another incident will occur.

a"But look at the numbers," he said. "The total number of violent crimes has gone down each year, but homicides overshadow (the reduction). Our numbers go down but there are still tragedies of kids getting shot and killed.

"There is not one thing (we could have done) to stop this. We hope for best, unfortunately this job deal with tragedies like this sometimes."

On July 8, Markie Mason, a vibrant 8-year-old boy, had his life taken from him by once-convicted killer Keith Burley Jr. in a Union Township h…