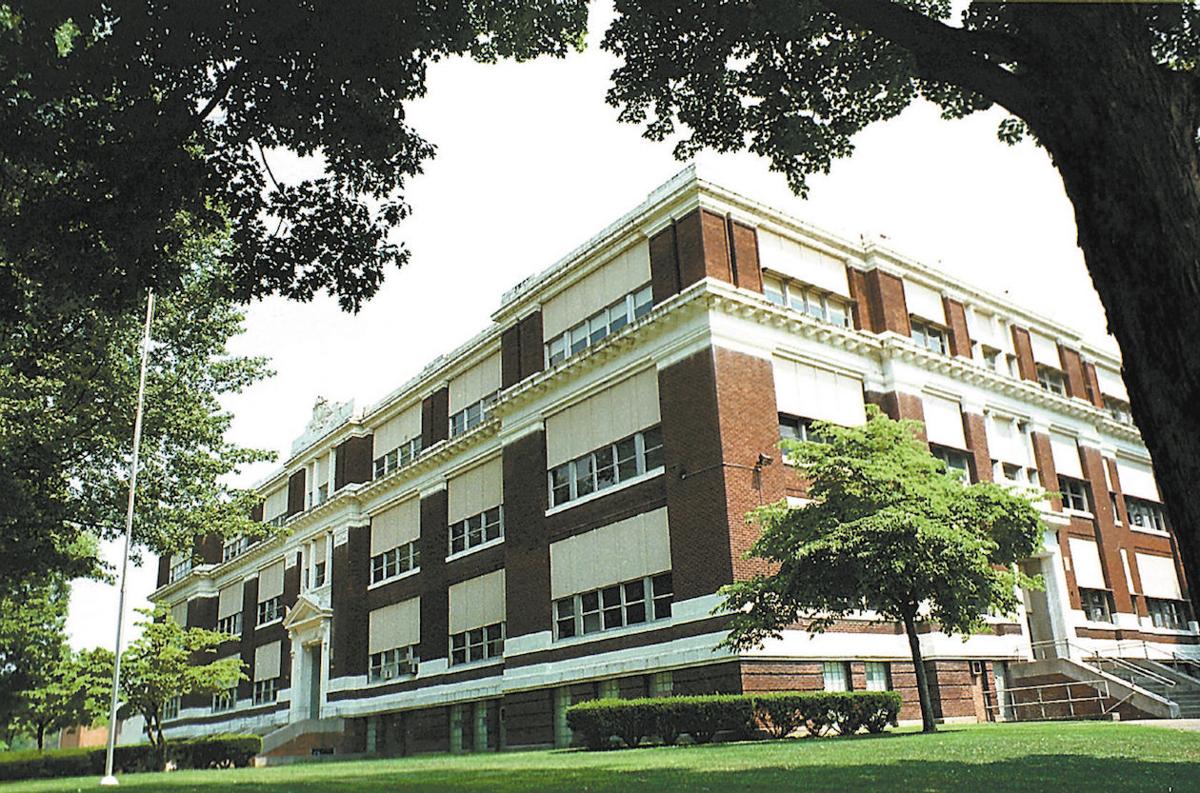 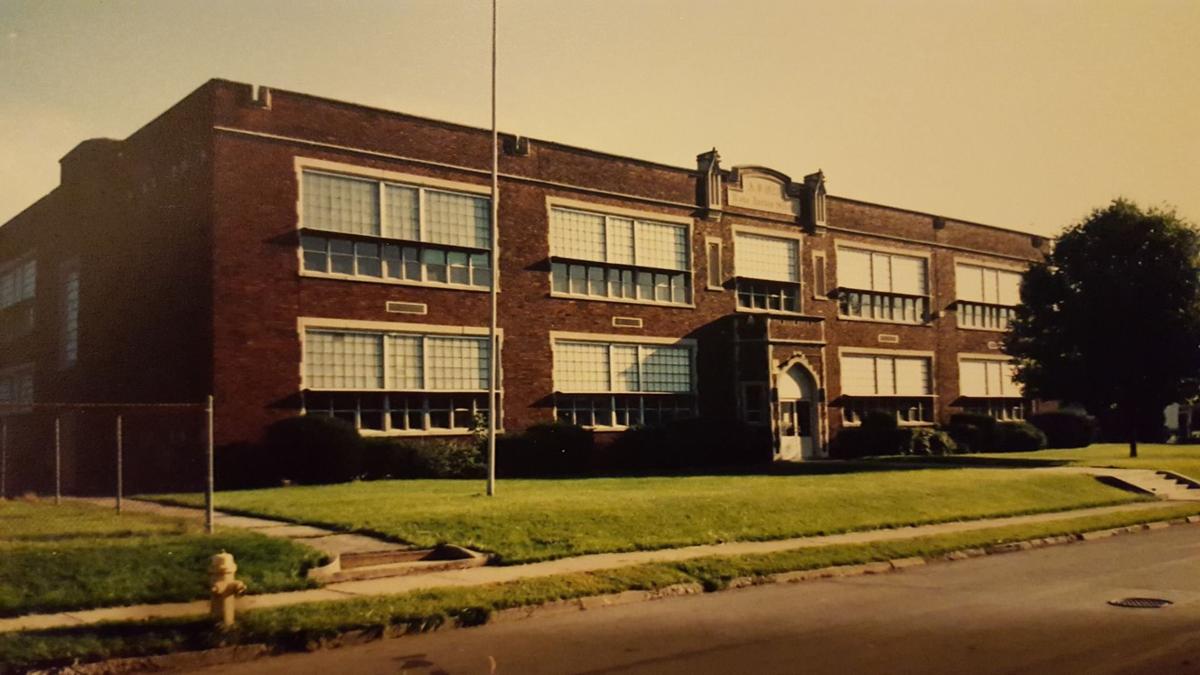 The Rose Avenue School, on the city's East Side, closed in 1988. 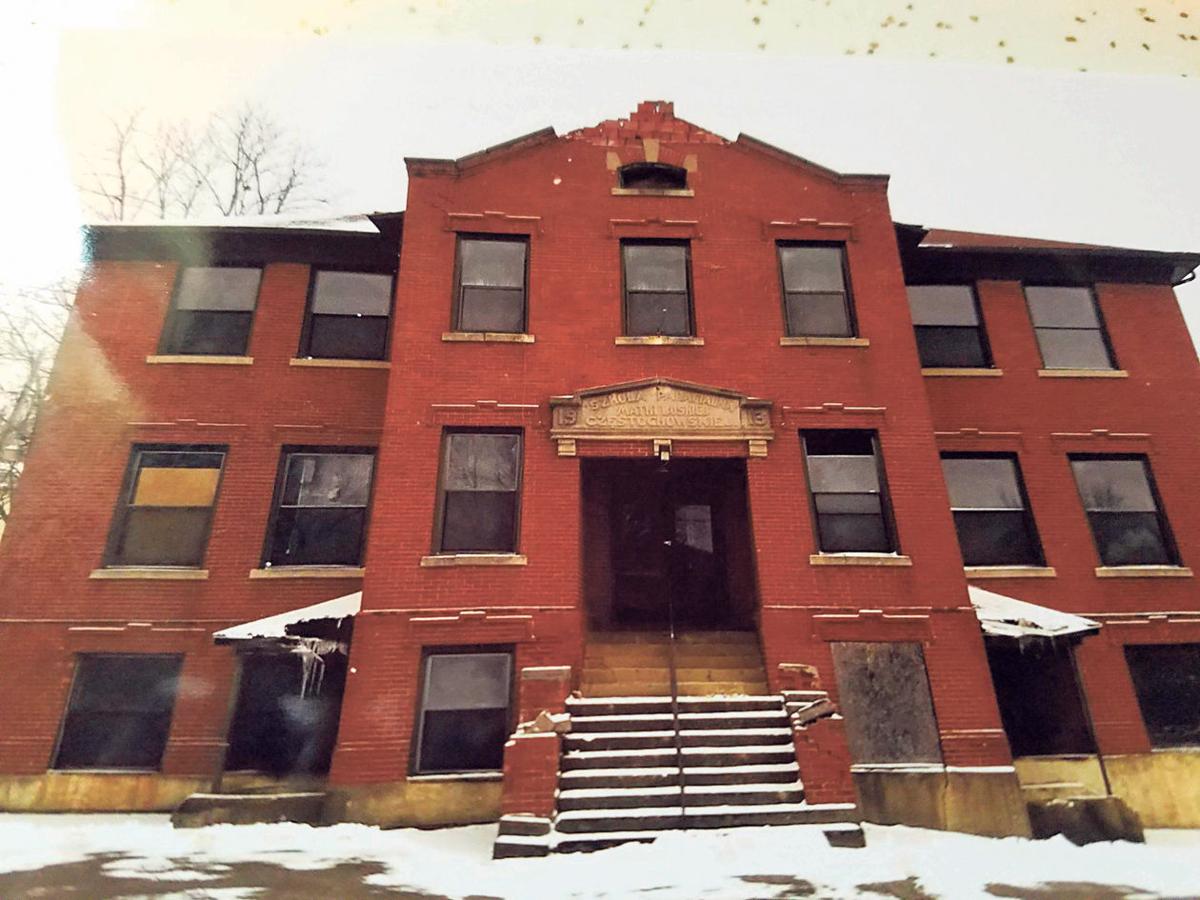 The Madonna of Czestochowa School was built in 1913. 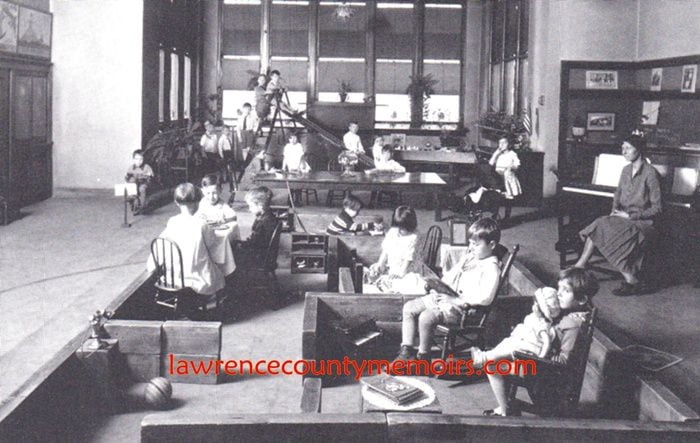 A teacher watches over kindergarten students at the former Rose Avenue School in 1924. 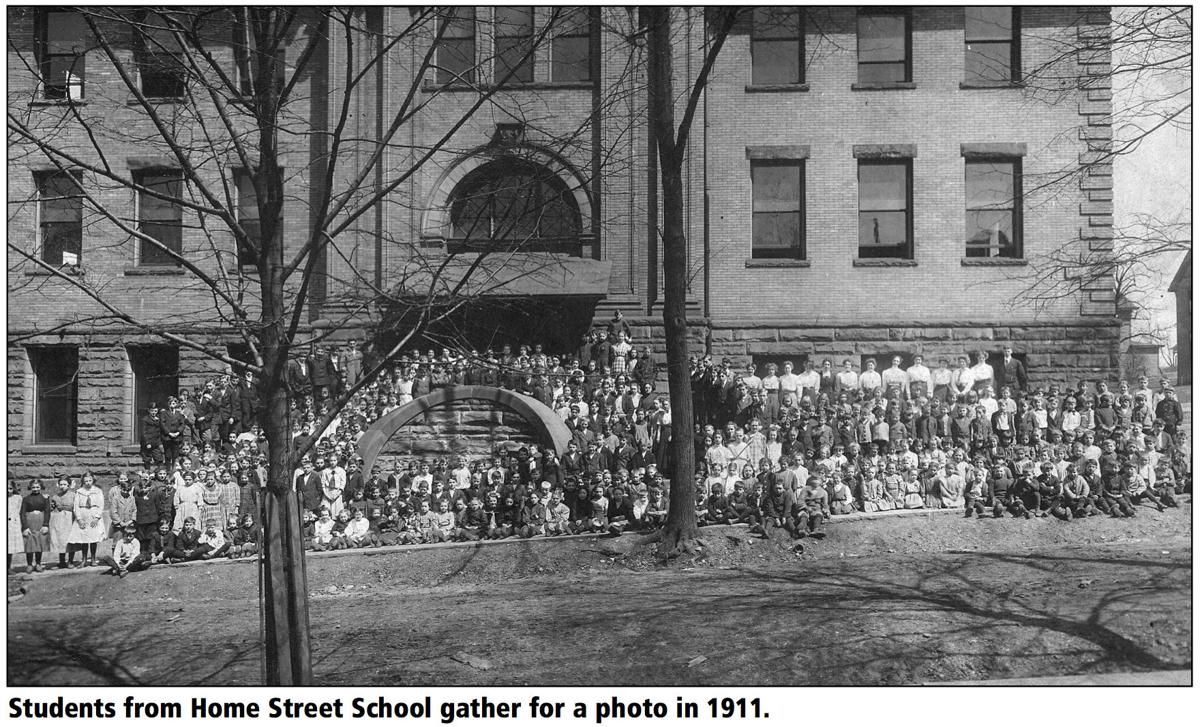 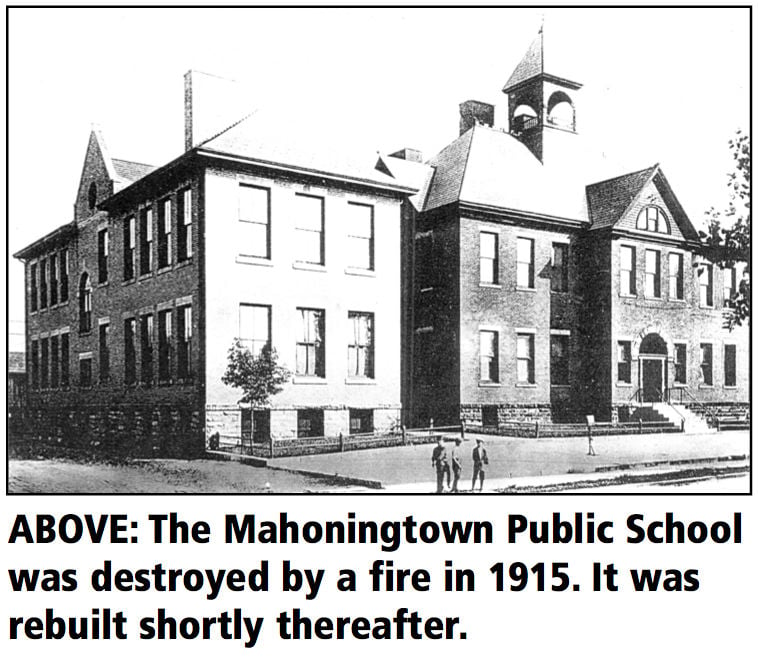 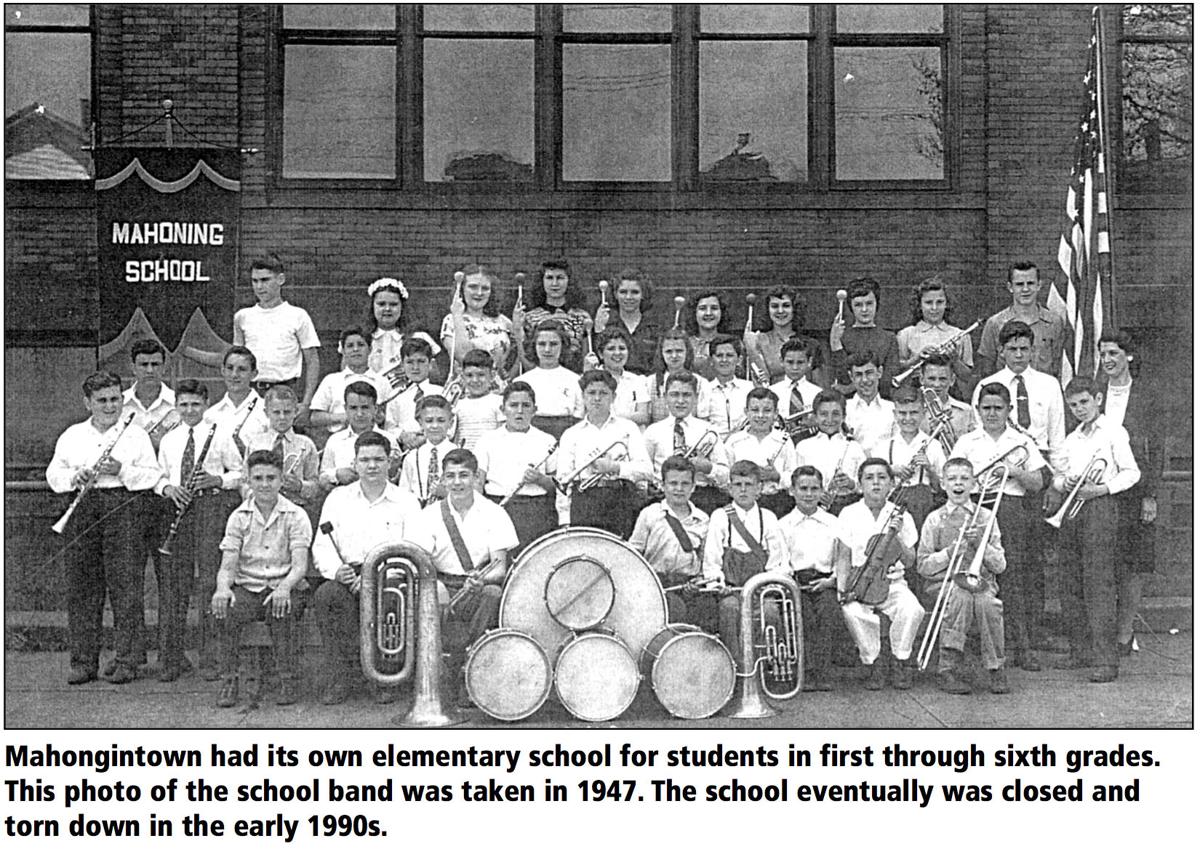 The Rose Avenue School, on the city's East Side, closed in 1988.

The Madonna of Czestochowa School was built in 1913.

A teacher watches over kindergarten students at the former Rose Avenue School in 1924.

One room. Two room. Three stories. At least one with a clock tower.

It’s not difficult to figure out what’s being described.

Schools in New Castle and throughout Lawrence County have evolved from a group of classmates of all ages sitting near a pot-bellied stove to today’s modern facilities with state-of-the-art technology.

The lifelong Mahoningtown resident attended the former Mahoningtown School. The three-story brick school closed along with Arthur McGill, Rose Avenue, Lincoln-Garfield and West Pittsburg in 1988, and was razed in 1994.

Mahoningtown School, like so many scattered across the city of New Castle, has a long, colorful history.

It was constructed in 1893 for $10,000. An article from The News that same year stated that there were four teachers and 212 students.

Mahoningtown became the Seventh Ward of New Castle five years later and the school became part of the New Castle Area School District. As the population of that section of town grew, the Lawrence School opened in the area known as Tubetown, according to Jeff Bales of lawrencecountymemoirs.com. With even more growth, a four-room annex was built in 1906, and by the time World War I started, 600 children were enrolled.

More upgrades were planned but before that could happen, fire swept through the main portion of the school and gutted the entire structure in 1915, Bales said.

Meanwhile, though, a new school, which included a gymnasium, was dedicated in 1916.

DeProspero reflected on the gym, which he referred to as being “down in the hole” or cellar of the school.

“It was real small and spectators couldn’t sit there.”

As for instructors, he is precise, flicking off names as if it was just yesterday that he was in class.

The recollections, for DeProspero, are sweet.

And they are for so many who attended schools in New Castle.

In 1948, Jim Mardis was a student at the former Arthur McGill School, which opened in 1922 and is now New Castle Christian Academy.

At recess and lunch time, the kids played a game called mumbly peg and circle marbles.

“Those were fun day,” Mardis reminisced.

Several decades later, Jason Brown of Zelienople attended Arthur McGill until it closed in 1988 when he was in second grade.

“The second-grade classroom was on the left side of the building, on the ground floor, where you could stand outside and see into the classroom for the most part,” Brown mentioned, adding his teacher, Mrs. Levine always wrote a happy birthday greeting on the chalkboard if someone was observing his or her special day.

“By coincidence, my birthday was on the last day of school in 1988, and the chalkboard read ‘Happy Birthday, Jason’. After that day, the janitors did not do a full cleaning since the school was no longer in use. For that whole summer, if I rode my bike from Sheridan Avenue to Arthur McGill, and looked into the window to our classroom chalkboard, it was my birthday every day.”

“I remember teaching the children basketball in the gym,” George said. “They became good players in high school — players like Shawn Anderson, Ralph Blundo, Frank Bongivengo and Jason Zarilla, to mention a few.”

Judith Emery Naugle of New Castle said she has fond memories of attending Arthur McGill from 1950-1956 when there was an hour for lunch.

Sometimes, she bought her lunch at Isaly’s on Highland Avenue ordering a chipped chop sandwich.

“Although I lived five-and-a-half blocks from the school, I would hurry and eat my lunch and run hastily back to school where we played softball every day, boys and girls, before the afternoon session.”

Each student had nicknames of famous players.

Hers was Pee Wee Reese of the Brooklyn Dodgers.

Across town, on the East Side, there were several elementary schools including the one on Rose Avenue. The 15-classroom brick school opened for classes for 463 students in 1924, Bales noted.

Also located on the East Side was Pollock School, and Cecelia Liposky was in the last sixth-grade class to graduate from the school on Pollock Avenue.

“I grew up on Epworth Street and walked to school every day,” Liposky said. “There was no lunchroom, so we walked home for lunch and back, too. Along the way we would stop at Palumbo’s store on the corner of Pearson and Taylor.”

When it was decided the school would be closed, students made protest signs and picketed, even thought the decision was already made, she explained.

Off Ray Street was Oak Street School, and later Lockley Elementary School was built to replace it, said Richard Johns.

Fred Harlan of New Castle isn’t sure how many people remember White School but said it was at the city line on West Washington Street.

“It closed and later they made some kind of pottery in this same building,” Harlan said. “There were two large rooms; the front section had first and second grade, and as I remember, the room in the rear of the building was third and fourth grades.”

Thaddeus Stevens School, named for a congressman who was the father of the early public school system in Pennsylvania, opened in 1898. The two-story structure had a two-ton bell that rang out several times a day, Bales said.

Interestingly, that bell, which hadn’t been rung for more than a decade, was saved from destruction by D.O. Davies, and it was mounted near the new playground.

Thaddeus Stevens, along with John F. Kennedy and West Side schools, went on to become a primary center until all three were closed for good with the construction of the Harry W. Lockley Early Learning Center.

On the South Side, the building housing Lincoln-Garfield Elementary School is vacant.

Elaine Borsic Lukowski recalled that in 1955, she was in first grade at Lincoln-Garfield, and had “a wonderful teacher named Mrs. Stone.”

“I got my first kiss in the coat room from some little boy,” Lukowski said.

Many New Castle residents remember going to junior high at either George Washington or Benjamin Franklin.

In 1916, the city purchased 12 acres on Cunningham Avenue to build Ben Franklin for grades seven through nine. Students started attending classes in September 1922.

According to Bales, more than 7,000 people attended a ceremony — one of the largest ever held in the city — when the cornerstone was laid in place.

In August 2004, seventh- and eighth-graders from Ben Franklin transferred to the new high school. At that time, Ben Franklin was reportedly the oldest junior high school in the nation and finally closed for good in June 2005, although it avoided demolition.

The two-story George Washington Junior High, opened for classes in September ]1928. The building was not entirely completed but had more than two dozen classrooms, a double gymnasium, an elevator, and a partial basement with a swimming pool, Bales said. It was built to accommodate up to 1,250 students with room to expand.

In June 1987 the school board adopted a reorganization plan in response to declining attendance of its city schools that affected both junior high schools. George Washington was renovated and reopened as a city-wide intermediate school housing kids in grades 4, 5 and 6 in September 1988.

Eventually, students left behind the junior high world to make new memories and new friends in the higher grades.

In the early 1900s, New Castle schools were becoming seriously overcrowded. In September 1911, to help alleviate some of those issues, New Castle High School opened on Lincoln Avenue.

In his book, “Back to School,” Bob Presnar, informed that in about 1879 a dedicated high school, with a capacity for 350 pupils, was built on the corner of North and East Streets. By 1906, the students had to be split into half-day morning and afternoon sessions.

A debate soon got underway to determine whether to upgrade and expand this aging school or build a new one.

The decision was made.

In June 1907, it was determined that a single consolidated high school would be constructed, and the “Berger site” on Lincoln Avenue was chosen.

In 1922 the New Castle School District began experimenting with a split-year enrollment where some classes commenced in January and graduated in January. The last mid-year graduation took place in January 1947, before a dwindling enrollment saw a switch back to a single June-to-June class, Presnar said.

That building remained in operation until it was finally closed in 2003, and eventually demolished, and the new New Castle Junior-Senior High School opened on Sept. 1, 2004, to senior level students. When construction was completed in 2005, seventh- and eighth-grade students started attending.

Bales has his own triple dose of nostalgia for the school.

“Many of my family members, including my grandfather, Ray Bales Sr., my father, Jeff Bales Sr., and my uncle, Ray Bales Jr. graduated from the old Ne-Ca-Hi,” Bales said.

Among former students’ souvenirs there may be old yearbooks, photos and if you dig far enough, you may even retrieve an old report card or memorabilia like Bales has collected such as an admission ticket to graduation.

That was 73 years ago today.

Most likely, it was as remarkable an experience as it is now.

Across Lawrence County: Schools in every township

At two times in her life, Lorraine Rice has walked the halls of elementary schools in differ…