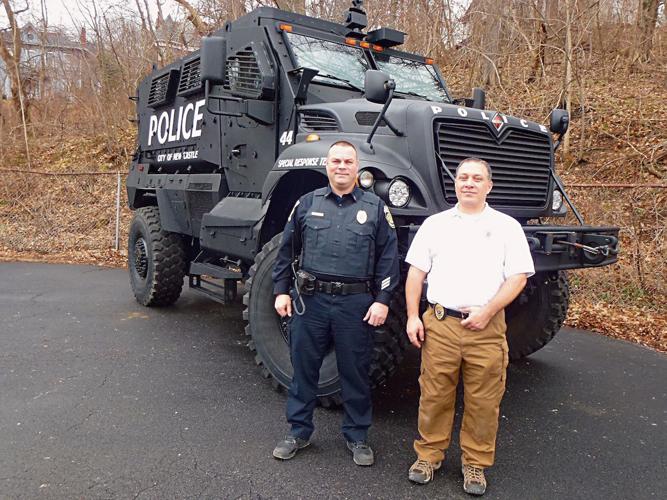 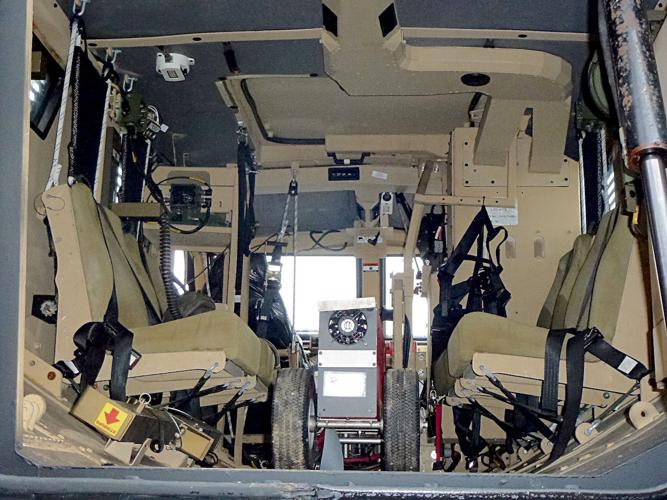 The seating inside the new city police armored vehicle will be replaced with bench seating to hold more members of the department's special emergency response team. 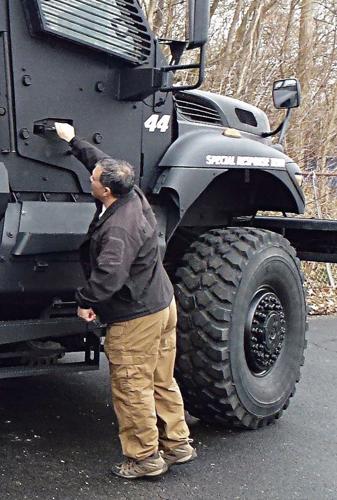 City police chief Bobby Salem closes the front door of the department's new armored vehicle, which is barely within reach.

The seating inside the new city police armored vehicle will be replaced with bench seating to hold more members of the department's special emergency response team.

City police chief Bobby Salem closes the front door of the department's new armored vehicle, which is barely within reach.

The New Castle Police Department has become the only municipal police department in Lawrence County to own an armored vehicle.

The department purchased a 2007 Mine-Resistant Ambush Protected vehicle and is converting it into an armored vehicle to protect the Special Emergency Response Team when it enters scenes of shootouts, stakeouts, hostage situations and rescue operations.

It has been painted black, lettered with the New Castle police insignia and is being prepared with emergency lights, siren, a public address system and a department logo. The seats inside will be replaced with bench seating to accommodate most of the city's SERT team members.

The commemorative number "44" is marked on the vehicle in memory of Lt. Nathaniel Akins, a city police officer who died July 7, 2016. His number was added because the vehicle "is big, and it's our protector," Chief Bobby Salem said.

Salem said the department applied for the vehicle and received it through a federal military surplus program administered by the state Department of Defense. The program transfers surplus military property to law enforcement agencies at no cost to the department, other than that of transportation and painting. Salem emphasized that funds for those purposes came from drug forfeiture funds in the department and not from tax dollars.

The department's investment in the vehicle thus far is $8,000 for transporting it; $8,000 for painting it; and $4,000 for maintenance — less than what a new cruiser costs. The officers are in the process of applying for a title for it from the Pennsylvania Department of Transportation.

"This was free," Salem said of the actual cost of the vehicle, adding that to buy an armed Bearcat would have cost thousands of dollars.

While Mine-Resistant Ambush Protected vehicles are designed specifically to withstand improvised explosive device attacks and ambushes, New Castle's use of it will be slightly different.

"If our guys are apprehending a barricaded gunman, we have a safer approach with a SWAT team," Salem said, noting that the department has participated in several incidents lately in which an offender shot at or threatened to shoot at police.

The armored vehicle's purpose is primarily as a protective barrier for police officers who are securing the perimeter of a hostage or active shooter situation. It serves not only to protect officers and civilians, but also as a deterrent, Salem said.

"Like bulletproof vests or shields, this vehicle is just another tool in the toolbox," he said, adding that "we hope we never have to use it.

"To have another tool that we can use to keep our officers safe and perhaps some citizens ... it's a benefit to have it."

The city police conduct tactical operations, and if the officers have to approach a premises under fire, their patrol cars won't offer them much protection in a situation with a barricaded gunman, Salem noted.

Lt. Kevin Seelbaugh, the city's Special Emergency Response Team commander, explained that as of now, six people can be seated in the vehicle. The department's plan is to remove the seating and install bench seats to accommodate nine in the passenger section and two in the front seats.

"We wanted something that is capable of stopping rifle fire," Seelbaugh said.

Salem pointed out that police in Mercer and Beaver counties have their own armored vehicles that were provided through the Region 13 Terrorism task force. The Mercer unit was deployed to Lawrence County last year during a hostage situation in Pulaski Township.

Seelbaugh said the city's vehicle was in a depot in Texas with about 45 armored vehicles, and they were released all at one time to different law enforcement agencies. New Castle was happy to get one.

"The government was going to scrap them," he said. "We're putting it to good use."

Salem said that other police departments in the county will be notified and if the vehicle is needed elsewhere, they can make contact through the special response team.

"We can take it to assist at any incident going on in the county," he said, "through mutual aid."

He added that he intends to do some public relations promotions, such as visits with it to community events to educate the community about its purpose.