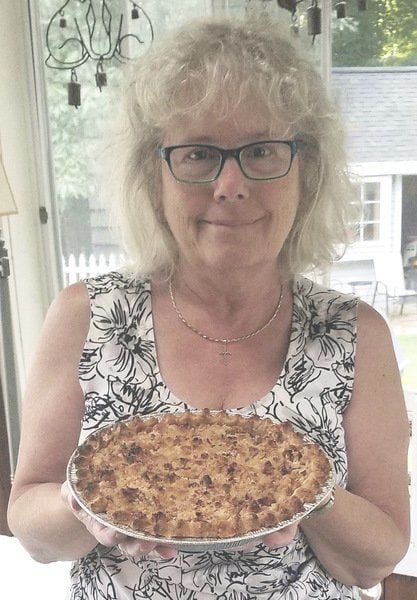 Jane Yates shows off her blue ribbon apple pie before it won at the fair. 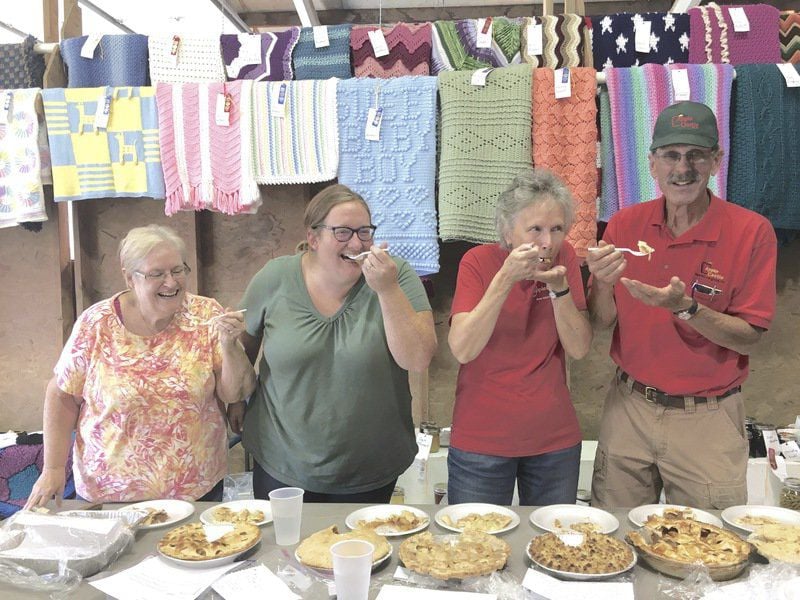 Judges of the Blue Ribbon Apple Pie contest at the fair sample some of the entries. From left are Mary Lou Peters, Kristen Trask, and Apple Castle owners Sandy Johnston and Lyle Johnston.

It was a tough call for the judges to pick one of the top two apple pies at the Lawrence County Fair this year.

It may have been the walnuts in the crumb topping or the egg in the pie crust that won the blue ribbon for Jane Yates of Neshannock Township. Her pie was deemed the apple of the judges' eye in the annual blue ribbon apple pie contest, judged Saturday before the fair opened.

Lyle Johnston, an owner of the Apple Castle, who with his wife, Sandy, assisted judges Mary Lou Peters and Kristen Trask, said Yates' pie had a more complex flavor.

Johnston said he was disappointed that there weren't more pies to judge. The category this year had only eight entries.

Yates said she decided to enter after she read about the contest in the newspaper.

"I decided, hey, I've got a good pie recipe," she said. "It was more or less to join in the spirit with the other bakers."

It was her first attempt to enter anything at the fair, and it was her only entry this year.

She baked two pies, one for the fair and one for her husband, George.

Yates said her mother, who died recently, was a good pie-baker.

"She always considered apple pie as a sign of hospitality," Yates said. She bakes her mother's pumpkin pie recipe, and there are five generations who have eaten it.

But Yates' winning apple pie recipe that she baked for the fair was a compilation of different recipes.

"Mom's pie-baking inspired me to keep on with it," she said.

She used a "never fail" pie crust recipe that she got from a church member, Jean Morrow, at a bridal shower, "and it truly lives up to its name. Anyone who thinks they can't make a pie crust should try it. It always works out, every time."

The recipe calls for an egg, which Yates believes makes the dough a little more elastic.

For her pie filling, she bought Earligold apples at the Apple Castle. They bake up soft and are on the tart side, and they don't take long to bake, so the crust doesn't burn, she said, adding,

"I would use those again."

Her crumb topping is a combination of recipes, too, she said, and she added chopped walnuts to it.

"I thought they would add a little texture to the pie," she said.

"I kept the pie in the oven for the full 40 minutes, and I watched it closely," she said.

As the fair winner, Yates is now eligible to enter the state farm show contest in January in Harrisburg. She said she would love to enter "if there's not too much snow on the turnpike."

Yates found out her pie won the blue ribbon when when she got a call from her daughter, Joy Wilson, who was at the fair and saw her name on the wall. Joy's mother-in-law, Jean Wilson, won the apple pie contest two years ago, so her grandchildren get to eat pie from blue ribbon-winning grandmas on both sides.

Her daughter and granddaughter, Addie Wilson, are involved in 4-H. Addie is a member of the Silver Spurs club and shows a horse.

Yates and her husband additionally have a daughter, Julie, in Virginia, a son, Jonathan in Sarver, Butler County, and a total of 7 grandchildren.

"We make a point to go to the fair every year, to support the community, eat the food and talk to the people," Yates said.

"It was very close," Johnston said of the top two pies, but the second-place one was under-baked by about five minutes, and Yates' was slightly over-baked. He said he voted for hers as the winning pie, but "it was a consensus."

The judges were Mary Lou Peters and Kristen Trask. The Johnsons have been lending their advice for at least the past 25 years.

The Apple Castle sponsors the pie contest each year, and in addition to what the fair premium pays, the business also gives gift certificates of $20 for first place, $15 for second place and $10 for third.

"I'm disappointed there weren't more pies entered," Johnston said. "The prize we give is worth entering."