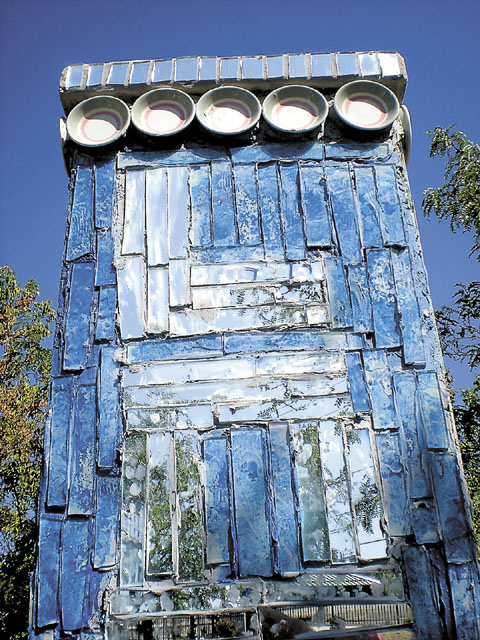 One of the columns in Millennium Park spells out ‘LOVE’ in big block letters made from mirrored glass. The white and gray saucers at the top bear the Shenango Pottery Indian insignia on their undersides. Baltimore artist Loring Cornish is expecting to complete the makeover in time for Friday’s 6 p.m. rededication. 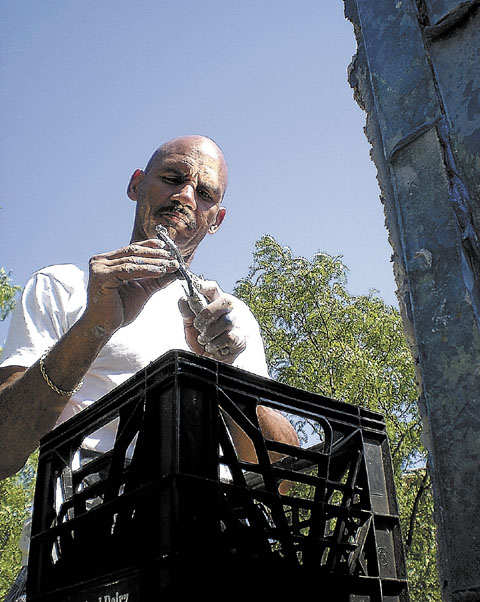 Baltimore artist Loring Cornish spreads thin-set mortar to a piece of glass before applying it to one of the three columns in Millennium Park on Croton Avenue.

One of the columns in Millennium Park spells out ‘LOVE’ in big block letters made from mirrored glass. The white and gray saucers at the top bear the Shenango Pottery Indian insignia on their undersides. Baltimore artist Loring Cornish is expecting to complete the makeover in time for Friday’s 6 p.m. rededication.

Baltimore artist Loring Cornish spreads thin-set mortar to a piece of glass before applying it to one of the three columns in Millennium Park on Croton Avenue.

If you never noticed the sculpture in Millennium Park, or maybe forgot about it, take another look.

You’ll see yourself in the transformation.

An artist has covered the three columns with a mosaic of glass — clear, colored and two types of mirrored glass that now are bouncing light and creating energy capable of sparking imaginations of Croton Avenue passersby.

A decade ago, the columns were covered in ceramic tile commemorating the community’s history. Of late, the tile’s glazing had failed, leaving an eyesore instead of a work of art.

Charged with the task of re-thinking the piece, situated in the parklet between East Washington Street bridge and the City Rescue Mission, was Baltimore ceramic artist Loring Cornish.

You maybe missed him because Cornish was cutting and snapping glass every night while the rest of New Castle slept.

Cornish rolled into town Sunday night from Baltimore with the bed of his white pickup truck crammed with the makings of art.

No detailed sketch, mind you, not even a ruler to score a straight-line — just a man, a vision and a glass cutter.

He forgot it — or at least couldn’t find it amid the crates of glass, tubs of mortar, buckets of grout, pigments, iron doo-dads and hammers and scrapers filling the truck bed.

So with the aid of his GPS tracking system, Cornish drove this palette-on-wheels to Weller’s Hardware on Labor Day and bought a glass cutter.

“It was just happenstance I was open,” recalled Tom Weller, who was spending a couple hours Monday on paperwork. Cornish phoned ahead and told what he needed.

“I couldn’t picture what he was working on,” said Weller, who had the tool about the size of small screwdriver, which is used to score a piece of glass so it can be snapped to a smaller size.

“I was impressed  by him,” Weller said, remarking he was a nice guy who obviously loved what he was doing.

Cornish apparently shared the sentiment because he purchased a Weller Hardware T-shirt to remember the Mahoningtown destination.

Wearing the shirt helps Cornish get into the soul of the city, a lot like the six or so Coney Island hot dogs he ate later that night. He also takes inspiration from the music his radio blasts from local stations and from the cardboard boxes of Shenango Pottery saucers that were stacked in the truck bed early Tuesday.

The dishes — gray banded with a pink line — were from the old New Castle High School before it was torn down.

Kimberly Koller-Jones scavenged them during a weekend when the school allowed nonprofits to come in and take desks, equipment and furniture.

“I found them in the kitchen,” Koller-Jones said. “Didn’t know at the time what I would do with them, but the current use seems pretty fitting.”

She’s also credited with finding Cornish, an established self-taught artist, whom she believed could bring a new vision back to the columns.

The tiles in the original park project were done by Ne-Ca-Hi students, noted Koller-Jones.

“So while they (tiles and students) are now gone, the dishes they ate off of are permanently affixed.”

The artist incorporated the dishes into the facelift because they were such a big part of New Castle’s history.

The dishes form a frieze around the two larger columns — as if, translates Cornish, “raining down” on what is below: the words  “TRY,”  “PEACE,” “LOVE,” “HOPE” and “JOY.” The words, on various sides of the columns, are crafted in big block letters of mirrored glass that he created over two days.

Early on in the design process, Cornish said the thought came to him to put New Castle on the columns, so people driving by can take pride in their city.

His hope is that people will react with: “Oh wow, I live here! I’m proud of my city. We’re innovative and moving forward.”

There’s “tons and tons of color” too, boasted the exuberant artist, who said he wants the piece to “pow and punch.”

On Wednesday, in his Weller T-shirt, the artist was beginning to grout the piece, which makes the letters pop even more.

The effect is dazzling in sunshine.

People viewing the piece can pick their word and see themselves in its reflection — as if trying peace, hope, joy or love.

It’s a powerful image for this or any millennium, and puts the challenge squarely on the shoulders of viewers.

“When you walk by it, it feels like it’s moving because of the mirrored glass,” Cornish observed.

In Baltimore, Cornish is known for two rowhomes he owns that he covered with a kaleidoscope of glass mosaics.

A small display of his art is being shown at the Hoyt this week, where the artist was delighted to learn the gallery was painted a special shade of red for the occasion.

The dedication of Cornish’s work in Millennium Park is set for 6 p.m. today, followed by a reception at the Hoyt for his work there.

Earlier this week, as the artist feverishly scored and snapped pieces of glass to satisfy a vision only he could see, he allayed any fears he would finish in time.

“It’s almost an act of faith that you can do something without planning,” he said.

“I’m glad the Hoyt and Kim had the interest and faith in me to come and do this for the city.”