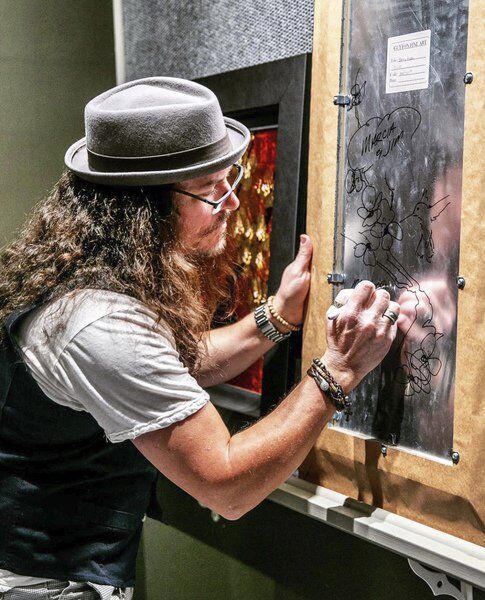 Artist Patrick Guyton signs one of his works. 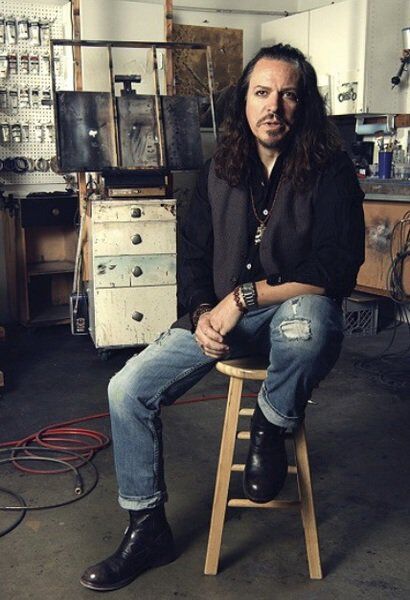 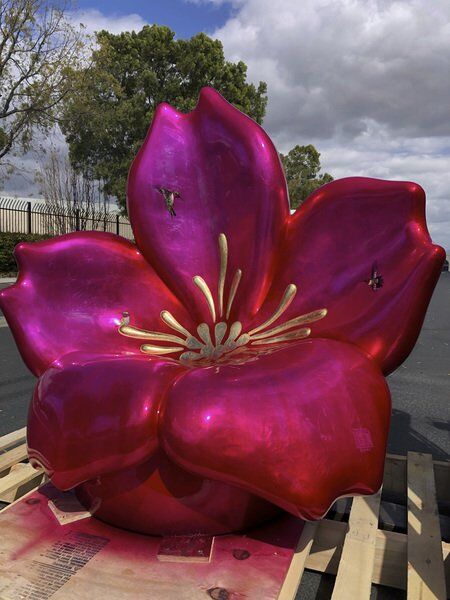 A cherry blossom sculpture by Union Township native Patrick Guyton is part of this year's National Cherry Blossom Festival. The sculpture can be seen at 1200 First St. NE in Washington, D.C. 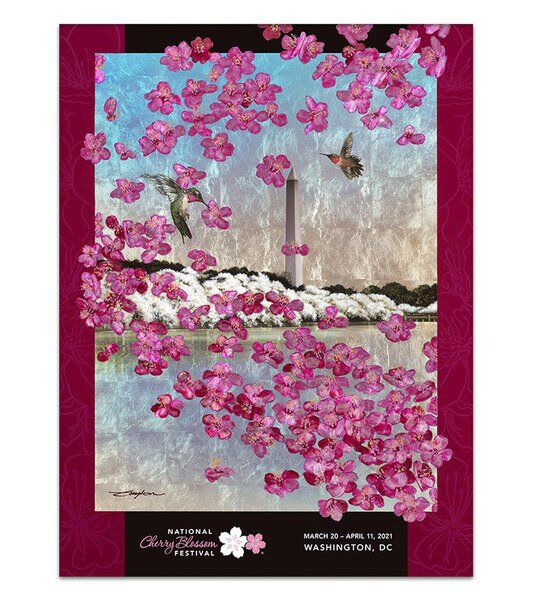 Artist Patrick Guyton signs one of his works.

A cherry blossom sculpture by Union Township native Patrick Guyton is part of this year's National Cherry Blossom Festival. The sculpture can be seen at 1200 First St. NE in Washington, D.C.

Hanging on the walls of Union Memorial Elementary School during open houses, Patrick Guyton's renderings of simple objects such as trees usually featured few extras that went above and beyond the given assignment.

"I'm not saying that they were spectacular, or better than the others," Anita explained. "But his tree wasn't just a tree, it was the one with the birds in it growing near the water. He was always very creative."

So it was no surprise to Anita when her son, now known in the global art world for his "gilded modernism" works embellished with precious metals, was chosen as this year's official artist for the National Cherry Blossom Festival in Washington, D.C.

For his part, Guyton is quick to credit his parents – Anita worked in interior design and miniatures while her husband Mike garnered awards for his commercial artwork – for instilling in him a love of the arts.

After graduating from Union, Guyton attended the Art Institute of Pittsburgh, studying in the school's fine arts program. But it was his passion for music that lead the bass guitarist to Southern California in the late 1980s.

"Art was supposed to be my backup plan," Guyton said in a phone interview. "I came out here to do musical things. Art, that was my waiting tables. Paint a sign, pay a bill."

While Guyton did establish himself as a musician traveling the globe as part of several bands including a 30-year stint with Leatherwolf, his side hustle began to take over as he took on more work in fine and commercial art doing commissions, illustrations, murals and signage.

In 1997, he joined Linda Jones Enterprises/Warner Bros. as a background artist and cell painter working under the legendary artists Chuck Jones, Maurice Nobel and Robert McKimson.

In 2008, he was discovered and signed by art publisher David Smith. Since then, he has opened signature Patrick Guyton Galleries in Laguna Beach, California, and Aspen, Colorado, has had shows across the United States and is featured by Park West Gallery in the company's global cruise- and land-based art auctions.

In was through one of those auctions, in early 2019, that a representative of the National Cherry Blossom Festival discovered Guyton's art and invited him to submit works.

"Personally, I'd been looking forward to the event for months when COVID kicked in, and here we are still with COVID a year later," Guyton said of this year's event, which runs through April 11 featuring live and virtual events. "I felt bad for the official artist in 2020 when everything was cancelled. Still, it's not often you get to be official artist of anything."

While Guyton's depiction of the D.C. Tidal Basin in springtime with a metallic vortex of cherry blossoms is featured on the festival's official poster and other merchandise, he also created one of 20 large cherry blossom sculptures being displayed throughout Washington.

"We planned to go there, but now we're going online, sitting in the living room Zooming," Guyton said referring to plans he and his wife Gretchen and daughter Piper had made to travel to D.C. "COVID was quite a letdown, but being chosen was quite an honor."

Guyton explained that the pandemic has affected all elements of the art world, from shutting down the cruise lines where his pieces were sold to leaving collectors with less discretionary income.

"It's been a tough year. Fine art is the last thing anyone needs to invest in when something goes south in the world, the same thing happened in 2008 (with the economic recession)," Guyton said.

"Art is such a fragile thing to do," he continued, explaining there were times when he and his family were living "day-by-day, minute-by-minute." "I've painted my fair share of children's bedrooms. I'd paint a fence if I could."

In fact, it was during a job interview for an artist's assistant position making coffee, stirring paint and sweeping floors, that Guyton was discovered by David Smith. Guyton had promised his wife he'd apply at the Home Depot next door if the interview didn't work out.

"I was ready to put on the orange apron," Guyton recalled. "I'd only dreamt about being a fine arts artist, showing in galleries."

Although he had to work through some disbelief, Guyton signed a contract on a Monday and had his first show that Saturday, selling 10 of the 12 pieces he'd just created during that week. Then he produced 16 pieces for the next weekend, selling 13.

"I went from toes in the water, to jumping into the deep end," Guyton said.

"Leafing has been used in art for so long in a lot of cultures and even sign painting," Guyton explained. "But America's take on how to add gilding into the narrative seems to be limited to firetrucks, bank windows and gold leafing on motorcycles, not in fine art. I thought what if I bring it into the gallery?

"When I was thinking about what I wanted to paint, what style, I looked at what I didn't see on gallery walls. Doing oil on canvas landscapes is tough because everyone does that, you have to be super crazy great to stand out," Guyton said. "So I picked something that's a complete nightmare to work with."

It also gets pricey, as Guyton uses only 100 percent pure platinum and gold leafing.

"But it's unique enough to keep me super-active," he laughed, noting that he'd like to get back into music when live events return but adding that for now his art "keeps me going every day, all day."