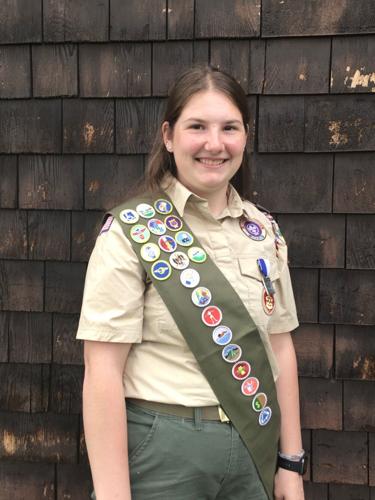 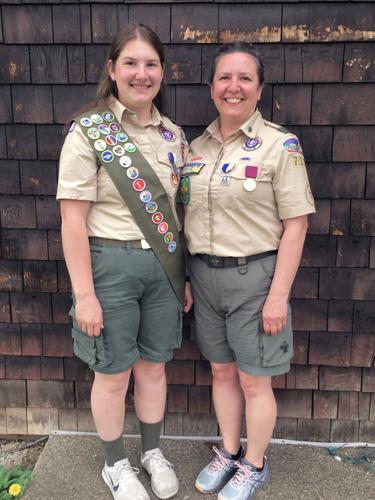 Emilie Richardson, wearing her merit badges, stands with her mother Leslie, who is her girl scout leader. 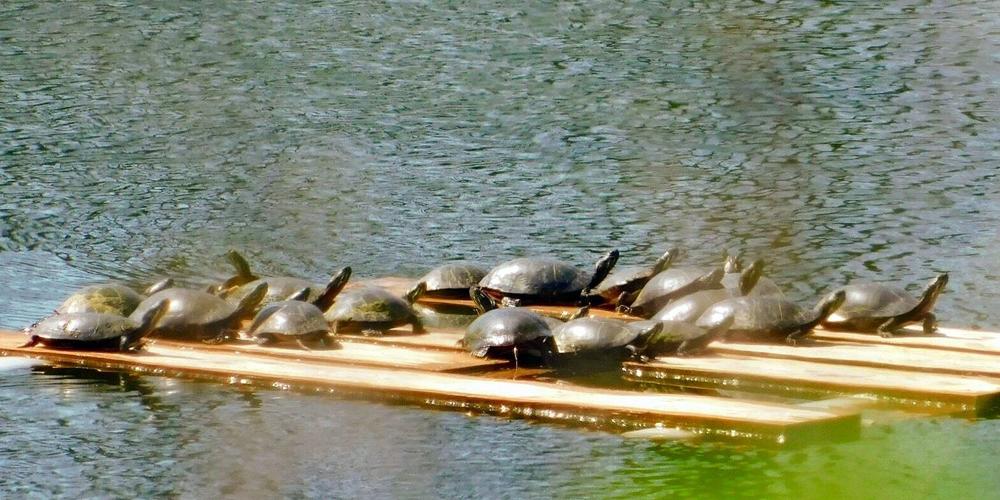 Turtles at one of the game land ponds in eastern Lawrence County seem to appreciate the hard work of Emilie Richardson, who built them a flotation raft for their sunning pleasure. 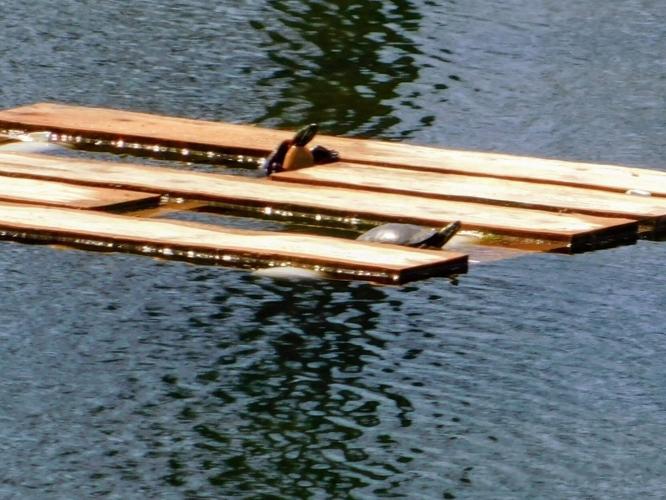 A single turtle finds its way onto a floating raft Emilie Richardson built just for its species as her Eagle Scout project. 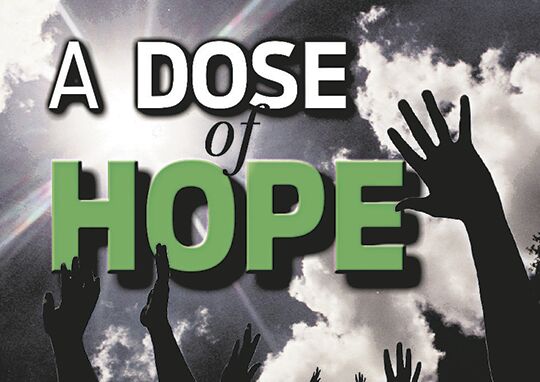 Emilie Richardson, wearing her merit badges, stands with her mother Leslie, who is her girl scout leader.

Turtles at one of the game land ponds in eastern Lawrence County seem to appreciate the hard work of Emilie Richardson, who built them a flotation raft for their sunning pleasure.

A single turtle finds its way onto a floating raft Emilie Richardson built just for its species as her Eagle Scout project.

Turtles inhabiting wetlands and ponds on certain game lands in Lawrence County now have places to safely climb out of the water and sun themselves.

The floating rafts, or turtle basking platforms, are the creation of Wilmington Township teen Emilie Richardson, who chose to build five of the devices as her Eagle Scout project.

And the turtles, sometimes dozens at a time, are using them and loving them.

The completion of her work resulted in her attaining the status of Lawrence County’s first-ever female Eagle Scout.

It’s been only a few years since the Boy Scouts first allowed girls to join and Emilie was there, eagerly knocking at the door.

She is now one of seven girls in the troop, which also has 13 boys.

She has been a Girl Scout since she was 5, but the Girl Scout Troop 733, to which she belongs, currently has only four girls. Her mother, Leslie, is the scoutmaster for the girls. Leslie also sits on the committee that oversees the boys troop.

Richardson grew up with two brothers. As she saw their involvement in Boy Scouts and the different trips they take, she decided that she, too, would like to join. Her older brother, Erik, now 21, also is an Eagle Scout, and her brother Evin, 15, is a Boy Scout.

The appeal to her about Boy Scouts was the type of projects they do for badges, she explained.

While the Girl Scout badges largely are for such activities as cooking and sewing and more domestic hobbies, the Boy Scouts do a lot more in the great outdoors, she said.

Emilie’s father, John Richardson, also is an Eagle Scout, setting the example for his three children.

“Earning the badges for the different skills helps you for the rest of your life,” Emilie said.

The outdoors, combined with her love for turtles, prompted her to choose the turtle loafing platform construction as her project to elevate her Scouting status.

She owned a pet turtle as a child, and turtles have always been among her favorite animals, she said.

The rafts were one of the projects listed on the Pennsylvania Game Commission website, so she downloaded the instructions and the specific measurements provided there.

With the help of volunteers she had recruited, she oversaw the building of 4x4-foot platforms out of hemlock lumber. The platforms then were placed in ponds on various game lands in eastern Lawrence County.

She had contacted Wildlife Conservation Officer Jeff Kendall and obtained his permission to put the turtle rafts on ponds in the state game lands where people wouldn’t be fishing.

She was pleased to see that, once in the water, the platforms are serving their purpose. Visits to the ponds show turtles, sometimes a dozen at a time, contentedly basking on top of the devices.

Two of the platforms are near Laurel High School and three are in Plain Grove.

Emilie wrote letters soliciting donations and/or reduced costs for her project and received a good response.

Venango Supply donated the PVC pipe for the floatation, and the wood came from Wilmington Wood Works, which also donated the cement blocks. Wilson Lumber donated the hardware, and Tractor Supply Co. donated the chain. The nails came from Ostrowski Masonry.

She explained that as an Eagle Scout candidate, she was expected to lead people to help build the project under her supervision.

“I had to make sure all of the adults and kids knew what they were doing,” she said.

She had helpers as young as 10 years old.

Richardson became an Eagle Scout at the same ceremony as Lorenzo Scarnati, whose project was to remake signs on the John Thompson Trail in Neshannock Township.

“You have to be in Boy Scouts at least three years to become an Eagle Scout,” Emilie said, reciting about six stages of scouting one must complete in order to attain the Eagle status. Eagle Scouts also are required to have 22 merit badges, 14 of which are required and the rest are activities of the scout’s choice.

Her project was approved by Steve Craig, who is Lawrence County’s Eagle Scout coordinator.

“It’s a really cool project,” Craig said. I’d never heard about anything like this. It’s inventive, it’s good for the environment and it’s fun.

This is one of the more interesting projects I’ve seen.”

He described Emilie as “a go-getter. If you want something done, ask a busy person, because she does everything. She’s such an upbeat, positive person.”

Craig’s job is to meet with the scouts about their selected projects and walk them through what’s expected of them and how to complete the paperwork.

He assembles the Eagle board of review of adult scouts who review the process and approve the Scout to be an Eagle.

“She’ll be a great representative of scouting for the rest of her life,” Craig said of Emilie. “She’s going to go places. This is a person you want to be around.”

Richardson will graduate Friday from Wilmington High School, where she has been a member of the marching band, playing mellophone, and of concert band, playing euphonium.

She also is a member of National Honor Society and has been on the school’s track and volleyball teams.

In addition to scouting, she is a member of 4-H and FFA, through which she has been shows pigs since she was 5.

Her family farm has 14 pigs, 13 of which are hers, and they have beef cows and 17 alpacas. Richardson said she breeds the pigs and was taught to do it as a business.

She has accumulated enough money in the venture to buy breeding stock, she said.

After graduation, she plans to become an entrepreneur and open a farm market with her mother on Route 18 in Shenango Township, Mercer County, where she hopes to sell alpaca and honeybee products and possibly maple syrup.

They also hope to host classes in weaving and crocheting.