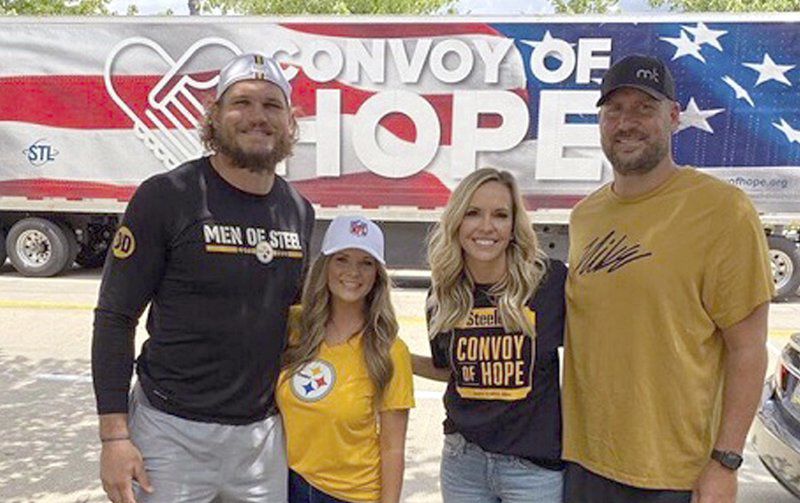 Ben Roethlisberger's Convoy of Hope will stop in New Castle on July 22 to distribute food to area families. From left are Pittsburgh Steelers tight end Vance McDonald, his wife Kendi, Ashley Roethlisberger and Big Ben himself. 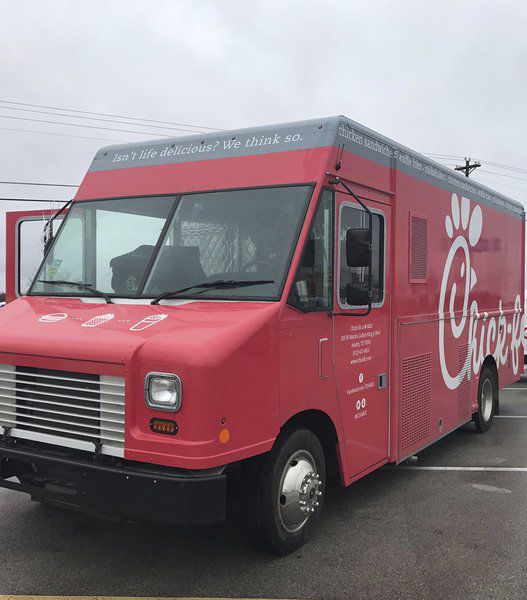 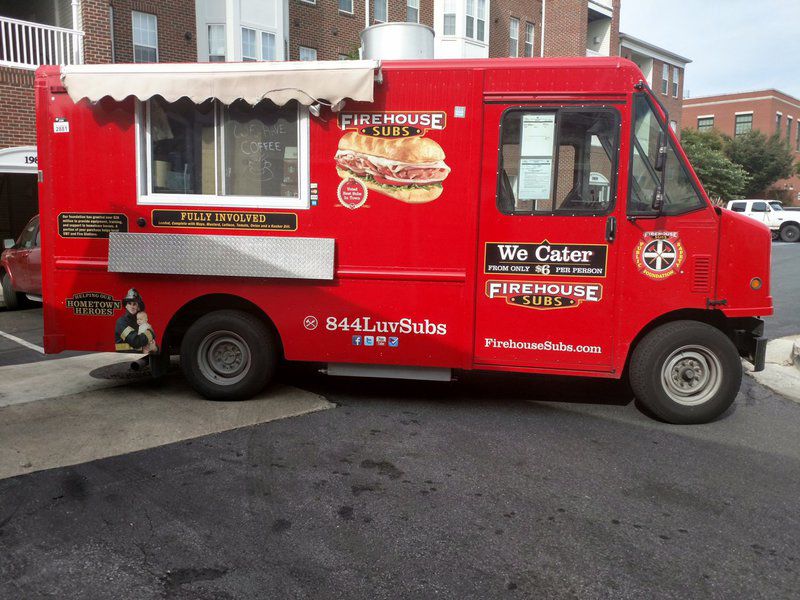 The Firehouse Subs truck is coming to the New Castle Fire Department.

Ben Roethlisberger's Convoy of Hope will stop in New Castle on July 22 to distribute food to area families. From left are Pittsburgh Steelers tight end Vance McDonald, his wife Kendi, Ashley Roethlisberger and Big Ben himself.

The Firehouse Subs truck is coming to the New Castle Fire Department.

Local residents will have the opportunity to try two chain restaurants that do not have locations within Lawrence County, while supporting important causes.

Additionally, Big Ben's Convoy of Hope, an initiative led by Pittsburgh Steelers quarterback Ben Roethlisberger, is planning a stop this month at Shenango High School to distribute food to hundreds of needy families.

The proceeds from both food truck sales will go to good causes.

The New Castle Area School District will host a Chick-fil-A food truck at the high school from 5 to 7 p.m. today and on future Tuesdays, to generate funding for  equipment the district needs to provide better take-home food for students in the district, according to district food service director Jeremy Bergman.

The International Association of Firefighters Local 160 will sponsor a Firehouse Subs food truck July 24, with a percentage of the profits to go to the New Castle Fire Department.

Here are more details for each of the three events:

Bergman explained that the food will be available in a drive-thru setup, as if it were a drive-thru at a restaurant, at the back of the New Castle Junior-Senior High School. The truck will be at that location school from 5 to 7 p.m., today, and every Tuesday for the next six weeks, ending Aug. 25, Bergman said. He is optimistic the effort could continue beyond that.

Bergman arranged for Chick-fil-A to come to New Castle.

The company has agreed to donate a percentage of its profits from the day to the school district, which will go toward the district's backpack program. The program sends meals home with economically disadvantaged children, Bergman said. His intent is to purchase a vacuum sealer and flash freezers, so he can create home-cooked meals such as pasta and meatballs to send home with children instead of less-nutritional canned dinner items, he said, adding, "That's been a longtime goal of mine."

The school district since March has been providing free meals to community families on certain weeknights, and that effort continues. Bergman said that the need for dinners has diminished since the beginning of the COVID-19 pandemic, because many people are back to work or they have other free food sources. Those dinners are still being distributed free from 6 to 7 p.m. Thursday nights only, in back of the high school.

Firehouse Subs will be at the New Castle fire station at 10 Margaret St., from 5 to 9 p.m. July 24, selling submarine sandwiches and other items. Some of the proceeds will benefit the fire department.

Fire chief Mike Kobbe said the hours may be expanded around lunchtime or earlier than 5 p.m. if the company receives a lot of orders in advance. He said the menu will be limited to about seven different types of subs, kids' meals, chips, pre-cut and wrapped brownies and bottled water or sodas.

"(Firehouse Subs) actually reached out to us,"  assistant fire chief Marco Bulisco explained. He added that the company typically picks certain fire departments in its areas for fundraisers. A portion of all those sales goes to the fire departments.

This sale is being organized by the New Castle Firefighters Local 160 of the International Association of Firefighters.

"We're already getting orders from the courthouse staff and Noga Ambulance," Kobbe said.

"There's been a lot of excitement about it since we did a public announcement on Facebook," Bulisco said. The fire department union's page had more than 100 likes, 423 shares and 35,000 hits, he said.

Bulisco said the department will have its firetrucks out that day on display.

Whether it will be a one-time event or whether the truck will return in the future is unknown right now, he said.

"We're willing to have them as many times as they want to come back," Bulisco said. "We didn't expect them to do this, it was really nice of them to offer to do it, and we're definitely embracing it."

A Pittsburgh Steelers-themed truck bearing food and other items for financially challenged families will make its way to New Castle on July 22.

One of Big Ben Roethlisberger's Trucks of Hope will be at the Shenango High School parking lot from 11 to 3 p.m., working in concert with Jubilee Ministries and the Christian Chamber of Commerce of Western Pennsylvania to add to the two groups' abundance of food supplies they are already planning to give out to families.

The Truck of Hope has chosen New Castle as a help location because it is the hometown of Roethlisberger's wife, Ashley, a 2004 Laurel High graduate. The joint food distribution will commence around 11 a.m. and will last until around 3 p.m. Roethlisberger previously had sponsored the truck as the last Convoy of Hope at Heinz Field.

A website called trucksofhope.com allows people to donate to his cause, and every dollar raised goes directly to families in need. The funds are used to provide food, hygiene and emergency supplies.

The program is sponsored by the Three Rivers Initiative, Greater Pittsburgh Community Food Bank and churches/ministries throughout the Pittsburgh region.

Locally, recipients of the food are part of the NOW — Nourishing Others Well — movement.

Linda Rupert of Jubilee Ministries International and the Christian Chamber of Commerce of Western Pennsylvania is helping to spearhead the combined event. Those organizations have been conducting food distributions since the coronavirus pandemic began, Rupert said.

"We started out early in March when we bought at truckload of food and gave it out at Cascade Park, she said, crediting Drs. Mark and Jill Kauffman as pastors and co-founders of the two groups.

Ashley Roethlisberger, who heard about their mission, reached out to their church to see if they needed more food supplies after seeing how the organization was helping the community, Rupert said. Ashley, Ben and other Steelers and their wives raised funds and bought the Truck of Hope, and it is driven into communities where it is most needed.

The food and other supplies they are providing will be integrated into what Jubilee Ministries is giving away as its normal distribution, Rupert explained. She anticipates the combined effort serving more than 1,500 families that day.

As part of the giveaway, pastors from several other churches receive products to take to their congregations and distribute around the city to people who are elderly or who cannot drive or don't have vehicles, she said. It gets spread out to the community. The food also goes to personal care homes that pick it up, she said.

Items given out in the distributions by Jubilee include fresh dairy boxes from Marburger Dairy through the Farmers to Families program, with fresh buttermilk, chocolate milk, sour cream, cottage cheese, cream cheese and butter; milk boxes, each with six half-gallons of milk; produce boxes from Paragon Foods with fresh fruits and vegetables; dry goods and canned items boxes donated from the Greater Pittsburgh Food Bank; and frozen meals from Lawrence County Community Action Partnership as part of the summer meals program for households with children up to 18 years old — each child will get a box of five nutritionally balanced, pre-prepared meals in a box.

"It's a lot of boxes, and gives them a decent amount of groceries to get them through a week for a family of four to six," she said, adding that Jubilee gives out food for one to three families per car.

"And there's a lot more on the Trucks of Hope," Rupert said.

The cars start lining up for the food around 8:30 a.m., she said. "There's that much need in our community for food."

That need includes people who have lost jobs or full-time status, people who are still waiting for unemployment, veterans, elderly and disabled people, and people who come from surrounding counties.

"The need is great," Rupert said. "God puts it in our hands and we give it out."

She noted that various entities of the community have come forth to help with the feeding mission. They include Equipment Rental Options and T&M Hardware, which provide forklifts; and members and chiefs of the New Castle and Shenango Township police and fire departments, who will help carry boxes to the cars. State representative candidate Lynn Ryan also volunteers, she said.

"It's the community coming together and working together to help our community," Rupert said. "It's a wonderful thing that God is doing. Mark and Jill Kauffman have wanted to see this for years in our community, and in the midst of a crisis, God is working miracles."

Betty L. Delaney, 93, of New Castle passed away on July 22, 2020, in the UPMC Family Hospice of Canterbury Place in Pittsburgh. Betty was born on Sept. 12, 1926, in Uniontown, Pennsylvania to the late Asa and Dolly Clark Brant. Betty enjoyed sewing and was a member of the Silver Sneakers. Su…