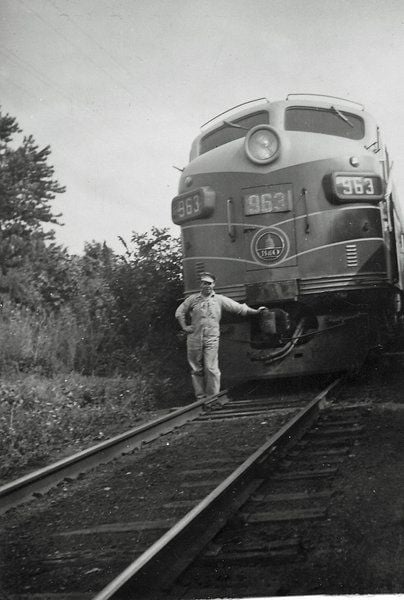 Engineer Oliver ‘Mac’ McConahy stands in front of a engine in the 1950s. 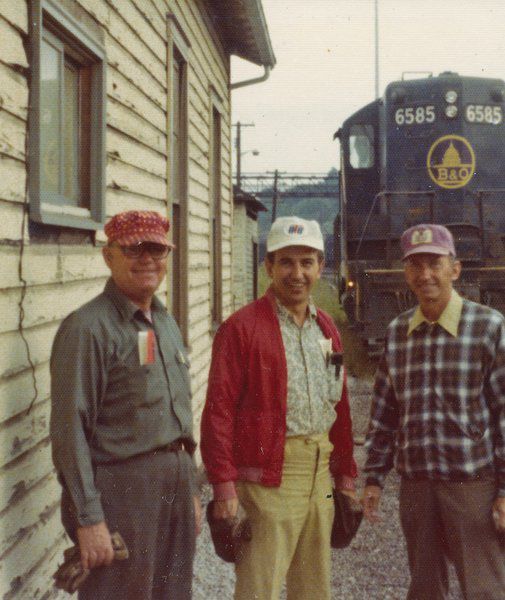 A crew from the B&O Railroad in 1976 included from left, Robert Wilbur Coates, Bill Winkler and Ralph Leonard. 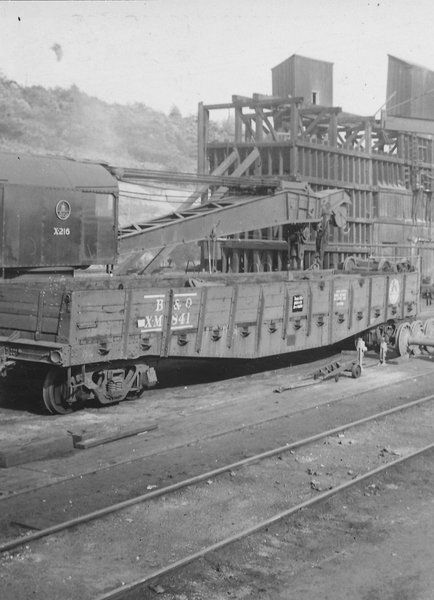 A B&O car is stopped at a coal dock at New Castle Junction. 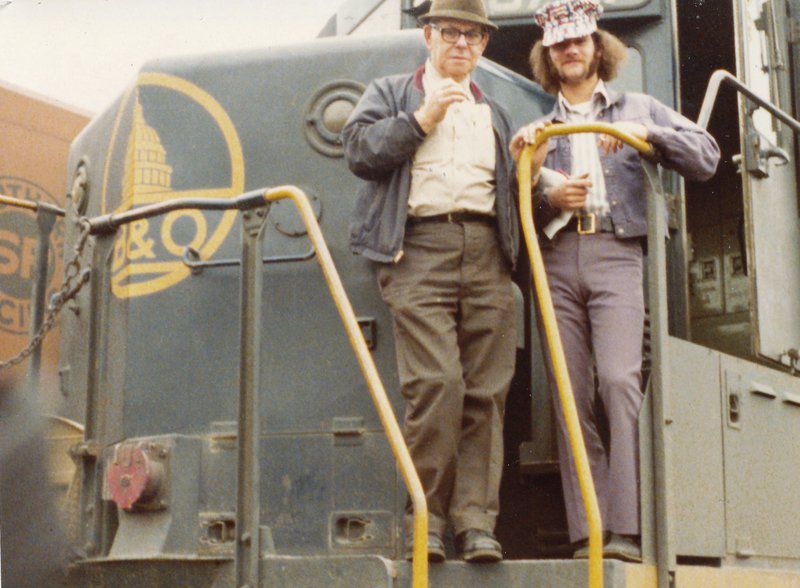 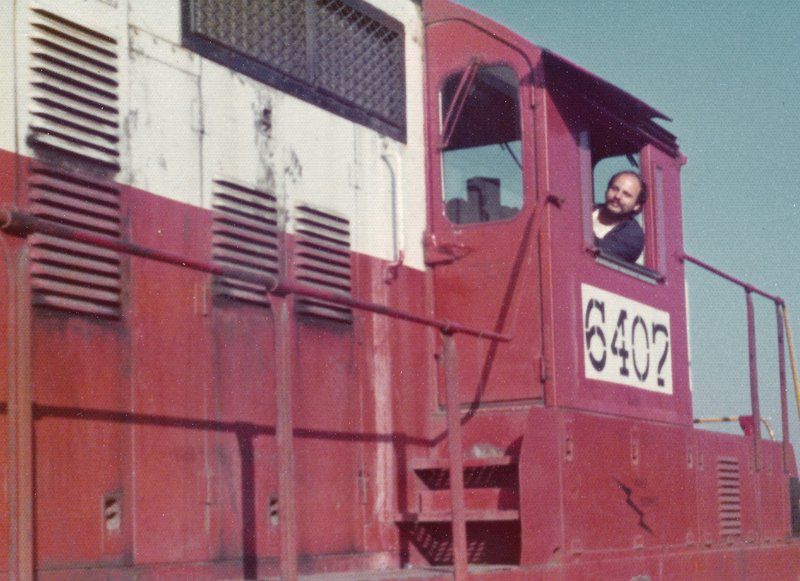 Fireman Mitchell looks out from the engine window as cars are switched in Haselton, Ohio, after leaving New Castle. 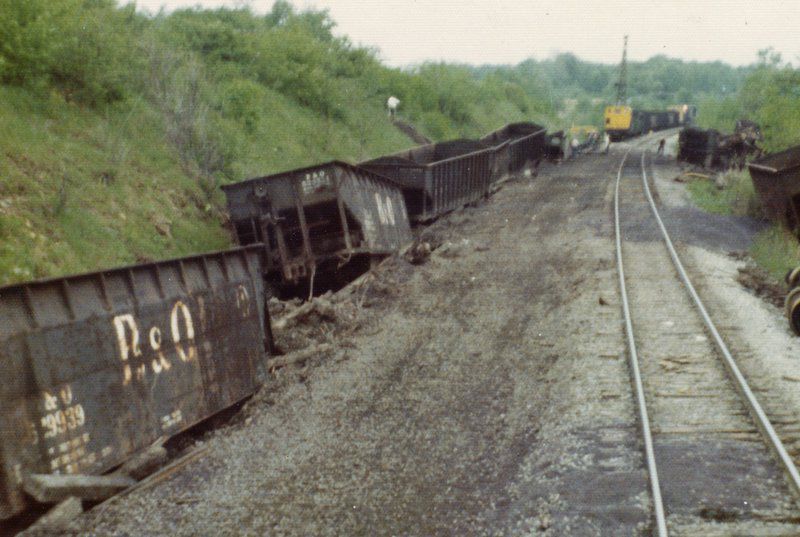 Train cars are scattered along the sides of the tracks after a wreck. 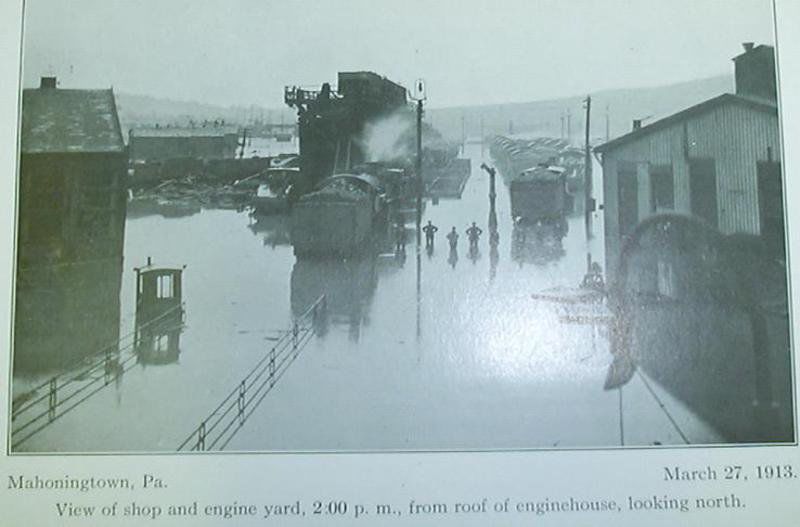 Workers stand near the shop and engine yard in Mahoningtown during the March 1913 flood. 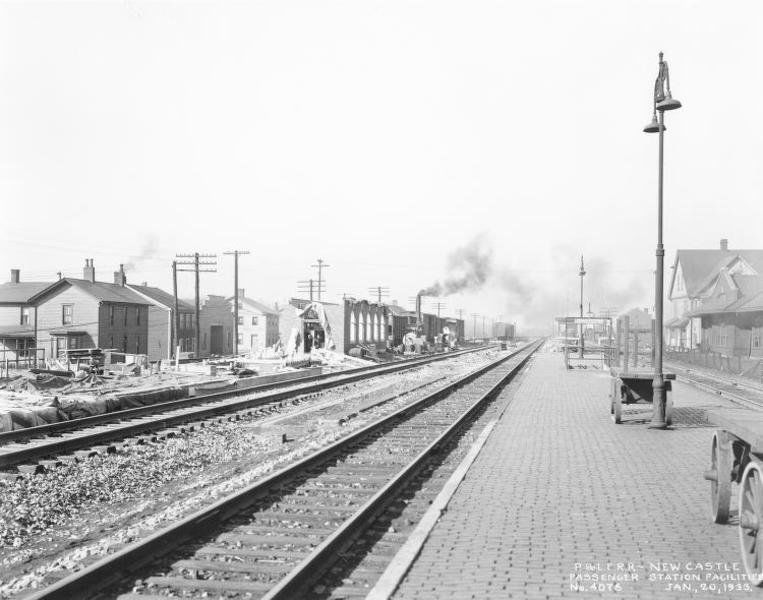 In 1933, this is how the P&LE Railroad passenger station in New Castle looked.

Engineer Oliver ‘Mac’ McConahy stands in front of a engine in the 1950s.

A crew from the B&O Railroad in 1976 included from left, Robert Wilbur Coates, Bill Winkler and Ralph Leonard.

A B&O car is stopped at a coal dock at New Castle Junction.

Fireman Mitchell looks out from the engine window as cars are switched in Haselton, Ohio, after leaving New Castle.

Train cars are scattered along the sides of the tracks after a wreck.

Workers stand near the shop and engine yard in Mahoningtown during the March 1913 flood.

In 1933, this is how the P&LE Railroad passenger station in New Castle looked.

“I’ve been working on the railroad

All the live-long day.

I’ve been working on the railroad

Just to pass the time away.”

— Lyrics from an old folk song

A conductor pokes his head out of the back of at the train and yells, “All aboard.”

The steam starts gushing, and the train begins to move down the track.

Trains have a rhythm all their own.

They produced the kind of thunderous sounds that were music to Don Magee’s ears.

Those engines made a racket for sure.

“Still, the wheels chugging away and all of that noise was delightful,” said the 91-year-old Ellwood City resident.

Magee was born and raised just a block from where the train, The Capital Limited, ran from Fombell to Ellwood City to West Pittsburg.

The railroad enthusiast who practiced dentistry for 55 years took the train once a week to the University of Michigan, coming home on weekends.

Trains will forever be dear to his heart.

Railroads had a dominant presence throughout Lawrence County, starting when the Civil War was being fought.

Perhaps it was a sweltering day in August1864 when a momentous occasion occurred, with or without fanfare. The New Castle and Beaver Valley Railroad opened and soon, several additional branch railroads were joined at what became known as Lawrence Junction located near Mahoningtown.

The sounds of the whistles aren’t as frequent as they once were, but a few trains rumble through each day.

There is just something about railroads that captures the imagination of another era.

Near the tracks outside Wampum lived the grandparents of Shenango Township resident Susan Owens, whose grandfather engineered for the Pennsylvania Railroad.

Once, a group then-referred to as hobos or bums — essentially vagrants — frequently set up camp at one place along the tracks and then moved on.

“My grandmother always made toast and took it out to them, wearing her little housedress,” Owens described. “And she always served them tea or coffee in china cups.”

A LOOK FURTHER BACK

Casey Jones-style striped bib overalls with matching caps were the uniform of the railroad for many years.

Those who worked on the trains wore that attire with pride.

Railroaders knew this particular mode of transportation was a central part of American life as the lines crisscrossed the country, carrying manufactured goods, food, the mail, express packages, and of course, people.

Jeff Bales of lawrencecountymemoirs.com said that at Lawrence Junction, the Pennsylvania Railroad set up a small rail yard with a passenger and freight station, minor repair shops and a boarding house/hotel. Lawrence Junction quickly grew in size and was located just across the Shenango River from a rival railway center known as New Castle Junction, said Bales, who added that other railroads soon extended out from Lawrence Junction, which later was established as one of the largest facilities of its type in the country.

Activity, particularly passenger service, steadily slowed in the 1920s coinciding with the increased use of the automobile and bus service.

A TICKET TO MEMORIES

Railroads were a family affair for Harry Banks.

The 90-year-old New Castle resident was a train master for both B&O and P&LE.

Banks’ father was an engineer for the Capital Limited for 54 years and his brother was also an engineer.

“We’re a railroad family,” he said.

When he was promoted to working in Youngstown, his job was handling all the celebrities who traveled by train and performed at places like Stambaugh Auditorium.

Banks said he never took a tip but his one request of such celebrities as Bob Hope and Frank Sinatra was to get their autographs.

The railroad was special to Banks, who has an extensive collection of photographs and railroad memorabilia including lanterns and a step stool from a Pullman car.

As many as 500 men were employed by the B&O’s New Castle Junction in Taylor Township, Bales said. There was a 22-stall roundhouse, several turnstiles, various shops and repair facilities, and passenger and freight stations. The B&O even operated a restaurant and had numerous bunk houses. It was a switching spot for the various regional train crews who stayed in Mahoningtown, New Castle, and West Pittsburg.

In the early 1970s, the B&O began phasing out its yard operations and moved them to Youngstown. The Chessie System took over ownership and kept freight operations alive here, then it was absorbed into the CSX Transportation system, which maintains a small yard facility at the site.

The B&O passenger station remained in operation until  1971 when Amtrak took over all nationwide passenger service.

June Napolitano’s father, Frank Reed, was an engineer on the B&O and her grandfather, Lew Reed, worked out of the caboose.

Napolitano has lots of memories associated with her dad, particularly of being “called out” in the middle of the night to report to the roundhouse.

There were two or three employees who made those calls, and they were actually referred to as callers.

“The callers had all the railroaders phone numbers memorized, Napolitano said.

Anthony “Tony” Galiano worked in the B&O roundhouse, repairing locomotives that came into the building.

“The whole engine had to be inspected each time,” Galiano said. “It was a total once-over.”

And Adam Pivovar, who hired out in 1941 and worked as a conductor/yardmaster until he retired in 1980, said the time passed quickly on the railroad.

Sometimes, there were wonderful, sweet moments mixed in with labor.

It was the act of a kind railroad engineer that saved a scared, hungry, dirty puppy.

Frank S. Dorsey of New Castle was a brakeman for B&O. Dorsey, recalls his daughter, Donna Dorsey, worked out of West Pittsburg and had layovers in Willard, Ohio.

On one of his trips back to West Pittsburg, he heard sounds in a boxcar and found the puppy.

“He brought him home and named him Dusty,” Donna Dorsey said.

The P&LE was formed by a group of Pittsburgh businessmen in the late 1870s to rival the Pennsylvania Railroad.

It soon became a great success in the freight hauling business and became known as the “Little Giant.” In 1880, the P&LE built a two-story passenger station in Wampum and eventually built stations at several other locations.

Living in a suburb of Pittsburgh, the rails were double tracked all the way from that city to New Castle, he said.

The member of the Beaver-Lawrence Railway Historical Society said that steam engines had a certain appeal.

Not only has Harper helped with the restoration of the former West Pittsburg Station, now owned by the organization, he also completely restored a tank car, gondola and steam engine.

But there was another railroad that can’t be forgotten.

By 1851, a stop on the Ohio and Pennsylvania Railroad was established south of Enon Valley, and a small settlement known as Enon Station quickly sprung up around it. The lobby of the St. Lawrence Hotel actually served as the train station for many years and was essentially the first-ever passenger station in Lawrence County.

When many of the men of Lawrence County went off to fight in the Civil War, they boarded trains at Enon Station.

Those traces of former glory days really count for Magee, who has acquired lots of railroad memorabilia.

“New Castle was a rail head,” he said. “It was a big hub for railroads to get to and come from.”