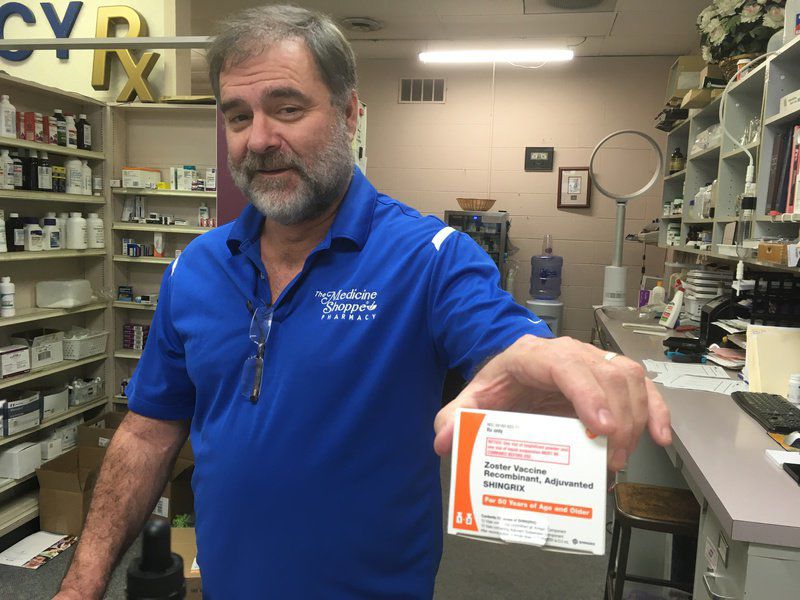 Eric Perry, owner and pharmacist at The Medicine Shoppe, has only been able to get some of the shingles vaccine Shingrix within the last month. 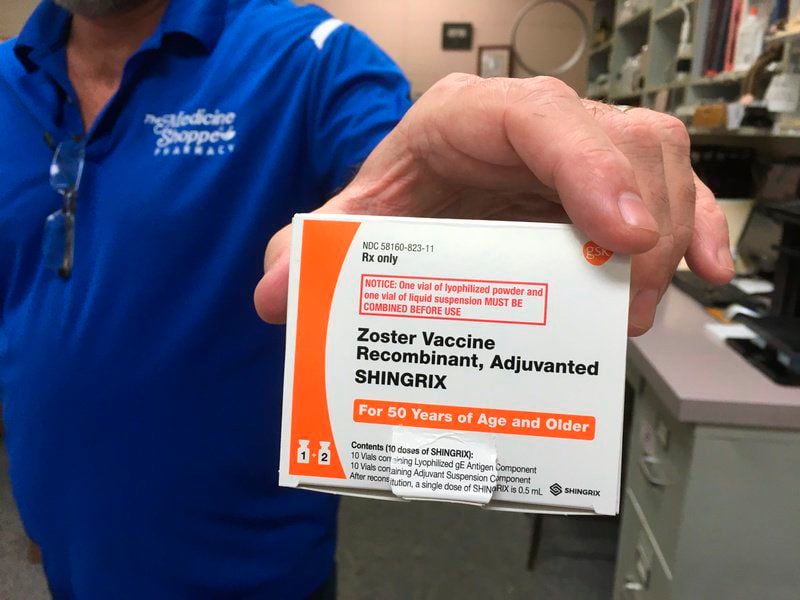 Pennsylvania is one of three states where a shortage of the shingles vaccine, Shingrix, above is most severe, according to AARP.

Eric Perry, owner and pharmacist at The Medicine Shoppe, has only been able to get some of the shingles vaccine Shingrix within the last month.

Pennsylvania is one of three states where a shortage of the shingles vaccine, Shingrix, above is most severe, according to AARP.

Shoppers weary of searching for that hard-to-find item this holiday season may need a shot in the arm.

But even that may be difficult to come by.

If the sought-after injection is Shingrix, potential recipients could face a long wait before a dose of the shingles vaccine becomes available.

Virtually since its 2017 launch, Shingrix — which replaced a less-effective predecessor, Zostavax — has been in short supply. A recent AARP report indicated that Pennsylvania is among three states (along with Montana and Colorado) where long waiting lists for the vaccine are the norm.

“Ever since the drug hit the market, it was impossible, from a local pharmacy standpoint, to get,” said Eric Perry, owner and pharmacist at The Medicine Shoppe on Wilmington Road. “You couldn’t order it from anywhere.”

The former New Castle Fire Department chief said that of the three main pharmaceutical suppliers, only one had the vaccine “and if you didn’t have an account with them, you couldn’t order it.”

That made it particularly challenging for locally owned pharmacies such as Perry’s.

“From what I’ve seen on the pharmacist websites, if you were in the Northeast region of the country, it was impossible because only the chains had it.”

Within the last month, though, Perry has finally been able to procure some of the vaccine, but “I’ve got a long, long laundry list of folks” waiting to receive the shot.

Adding to the delay is the fact that Shingrix requires two doses. A second injection must be received within two to six months after the first.

To be sure that the vaccine is available when a second shot is due, pharmacists like Perry keep half of each shipment they receive in reserve.

Drugmaker GlaxoSmithKline introduced Shingrix in 2017 and, according to Dr. Donald Middleton, was unprepared for the demand.

“The manufacturer thought they had enough doses because the old vaccine had not been embraced by the public the way other vaccines were,” said MIddleton, a UPMC-affiliated pediatrician who is involved in vaccine research and education. “The old vaccine had taken years to reach the level where 24 or 25 percent of the people who needed it had been vaccinated.

“So when GSK invented Shingrix, they thought the same thing would happen.”

However, two things changed that.

First, the vaccine proved to be far more effective than Zostavax. According to the CDC, Shingrix is 90 percent effective, as opposed to the 38 to 70 percent level of its predecessor. Thus, the CDC’s Advisory Committee on Immunization Practices voted to make it the preferred vaccine. It also revised the recommendation of when to get the vaccine from age 60 to 50.

Previously, Middleton said, Medicare would pay for the injections, but only if received in a pharmacy. When the CDC lowered the age, it became available in doctor’s offices as well and some private insurers began to pick up the cost.

“So they drop the age by 10 years — that’s about 4 million people every year — and suddenly, there’s a huge demand that the company simply was not ready for,” Middleton said.

He added that GlaxoSmith Kline announced last month that it is building a new manufacturing facility, but that the facility won’t be up and running until 2024.

“So we have a number of years to wait still,” Middleton said. “There’s been a shortage for two years, and it’s not going to be much better for another three or four years at least.”

At The Medicine Shoppe, the vaccine waiting list is compiled on a first-come, first-served basis.

That’s pretty much standard, although Middleton said that there are some health reasons that may take priority.

“If you have an illness that makes your immune system not function well, you are more likely to break out in shingles,” he said. “The Hillman Cancer Center has prime control over the vaccine doses that are given out through UPMC. Most of the vaccine given through UPMC is coming through one of the cancer centers or oncology offices, where patients may be at increased risk.”

He added that doctors are uncertain how well the vaccine will work in those already undergoing cancer treatment, but for anyone who is newly diagnosed and facing possible surgery, radiation and chemotherapy, “all of which make your immune system under attack, it’s good to get your immunizations before you start going through any major treatment.”

Online help in locating where Shingrix is available can be found at https://www.shingrix.com/shingles-vaccine-locator.html.

If the vaccine is hard to come by in a particular area, Zostervax remains an alternative.

“These two vaccines are remarkable,” Middleton said. “These are the only vaccines we have that will keep you from getting an infection from a virus that you already have inside your body (the shingles virus is present in anyone who has had chicken pox).

“Every other vaccine keeps you from getting a virus, but this one works to stop a virus you have already. It’s really cool. I don’t know how people figure these things out.”

Doctor, pharmacist: Get the shingles vaccine

Getting shingles can send you through the roof.

Confirmed coronavirus cases are rising in 40 of 50 states

Wolf: If you leave home, you must wear a mask