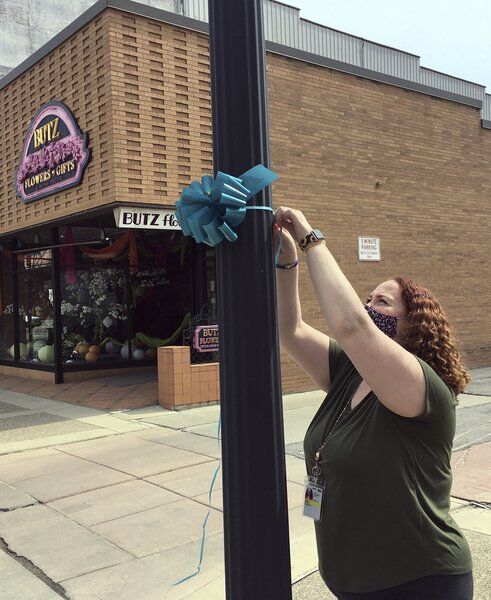 Rachel Pearce from the Crisis Shelter of Lawrence County ties a teal bow around an East Washington Street light post. Teal is the color for sexual assault awareness. 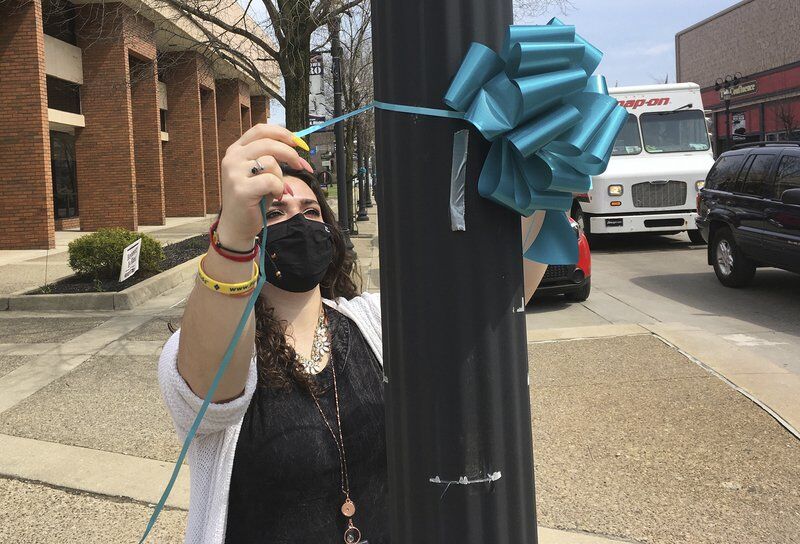 Sophia Mills from the Crisis Shelter of Lawrence County tries a teal bow to a light post at the corner of East Washington and North Mill streets as part of the shelter's initiatives during Sexual Assault Awareness Month. 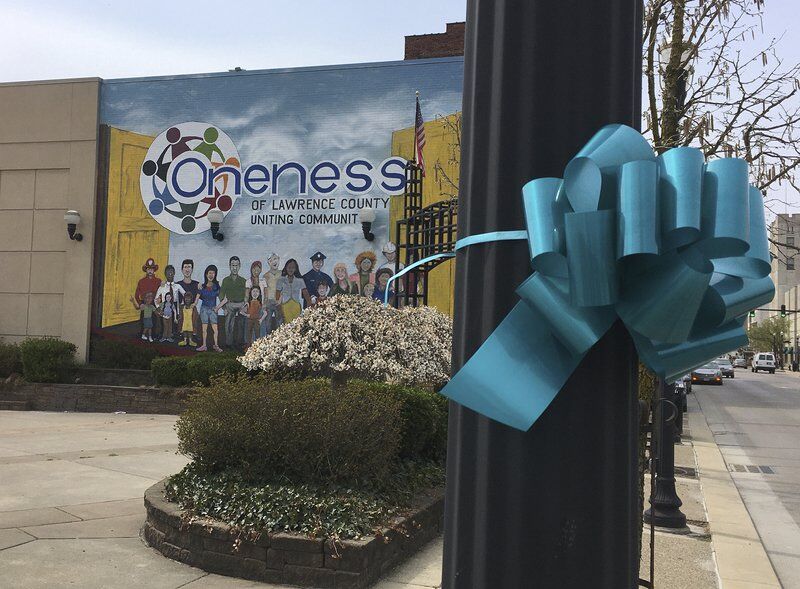 A teal ribbon adjacent to Riverwalk Park reminds passers-by to be more aware of sexual assault, its consequences and the help available for victims from the Crisis Shelter of Lawrence County. 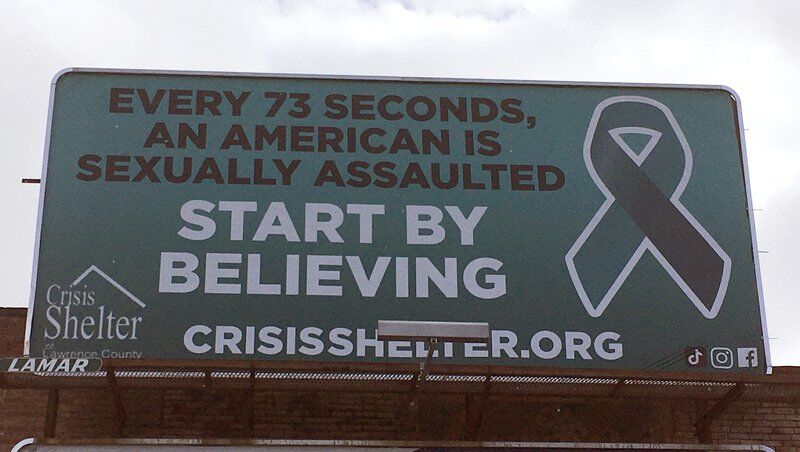 Rachel Pearce from the Crisis Shelter of Lawrence County ties a teal bow around an East Washington Street light post. Teal is the color for sexual assault awareness.

Sophia Mills from the Crisis Shelter of Lawrence County tries a teal bow to a light post at the corner of East Washington and North Mill streets as part of the shelter's initiatives during Sexual Assault Awareness Month.

A teal ribbon adjacent to Riverwalk Park reminds passers-by to be more aware of sexual assault, its consequences and the help available for victims from the Crisis Shelter of Lawrence County.

Educate and assist — the Crisis Shelter of Lawrence County wants to do both throughout April, which is Sexual Assault Awareness Month.

Like almost everything else, though, the mission is complicated by COVID.

"We want to bring awareness to this issue," said Shelter advocate Sophia Mills. "Oftentimes, it is something that people don't want to talk about; it's kind of pushed under the rug. We want to shine a light on a lot of these issues.

"Unfortunately, due to the nature of the pandemic, we are unable to be out and about in the community like we would want to be. But we have a couple of different initiatives so that we can still raise awareness and let people know that we are here and still accepting clients and wanting to support individuals in the Lawrence County community."

The shelter's plan to get its message out began last week with downtown billboards that feature a teal background. Teal is the color of sexual assault awareness, and residents also will see it in bows that the shelter is putting on light posts along East Washington Street and in yard signs that will be placed around the community.

"Every day, you are encouraged to post something," Mills said. "We are doing it at the Crisis Shelter on our social media, so that will be on our Instagram if anyone wants to check it out. It's really just about raising awareness and showing our support for individuals impacted by sexual violence."

In addition to handcuffing efforts to raise awareness, the pandemic also may have exacerbated the matter for many, Mills believes.

"People are encouraged to go to the hospital after a sexual assault to get a rape kit done," she said. "But because the hospitals have been so bogged down with COVID, it's been really tough for survivors to get out there, especially because they are stuck in their homes and might not have the resources or access to get to the hospitals."

Moreover, the survey showed that 81.3 percent of female victims and 70.8 percent of male victims experience their first completed or attempted rape before the age of 25.

Often, though, victims may not even understand what has happened to them.

"A big issue in general is that individuals may not know that what they experienced was sexual violence," Mills said. "A lot of times, if it's some kind of spousal or partner assault, you may just assume, 'That's my partner, so its OK.' But really, those cases are absolutely assault or harassment."

In the minds of many people, Mills went on, sexual assault is something that happens when a person is walking along and someone jumps out of the bushes and attacks him or her.

"While that does happen, this is not the majority," she said "It is usually an acquaintance, a partner, a loved one — someone that you know in some capacity."

She is optimistic that more people are beginning to understand that.

"I think because of the #MeToo era, people have become a lot more accepting (of that definition)," she said. "I like to think things are getting better, and we are raising more awareness, and things are becoming less stigmatized.

"There is lots of work that still needs to be done, which is why we're still here promoting events like these, but I do think it is starting to swing in the right direction."