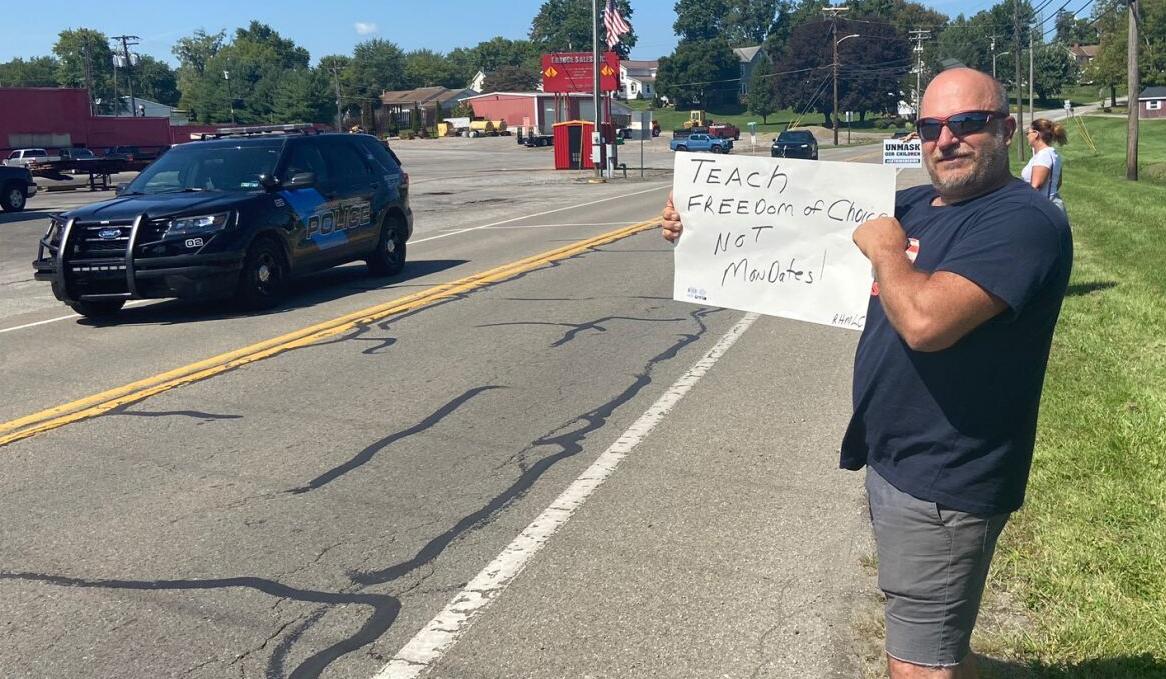 Philip Julian, who has a child enrolled in West Middlesex schools, was among the parents protesting mandatory face masks Tuesday along Sharon Road in front of the school campus. 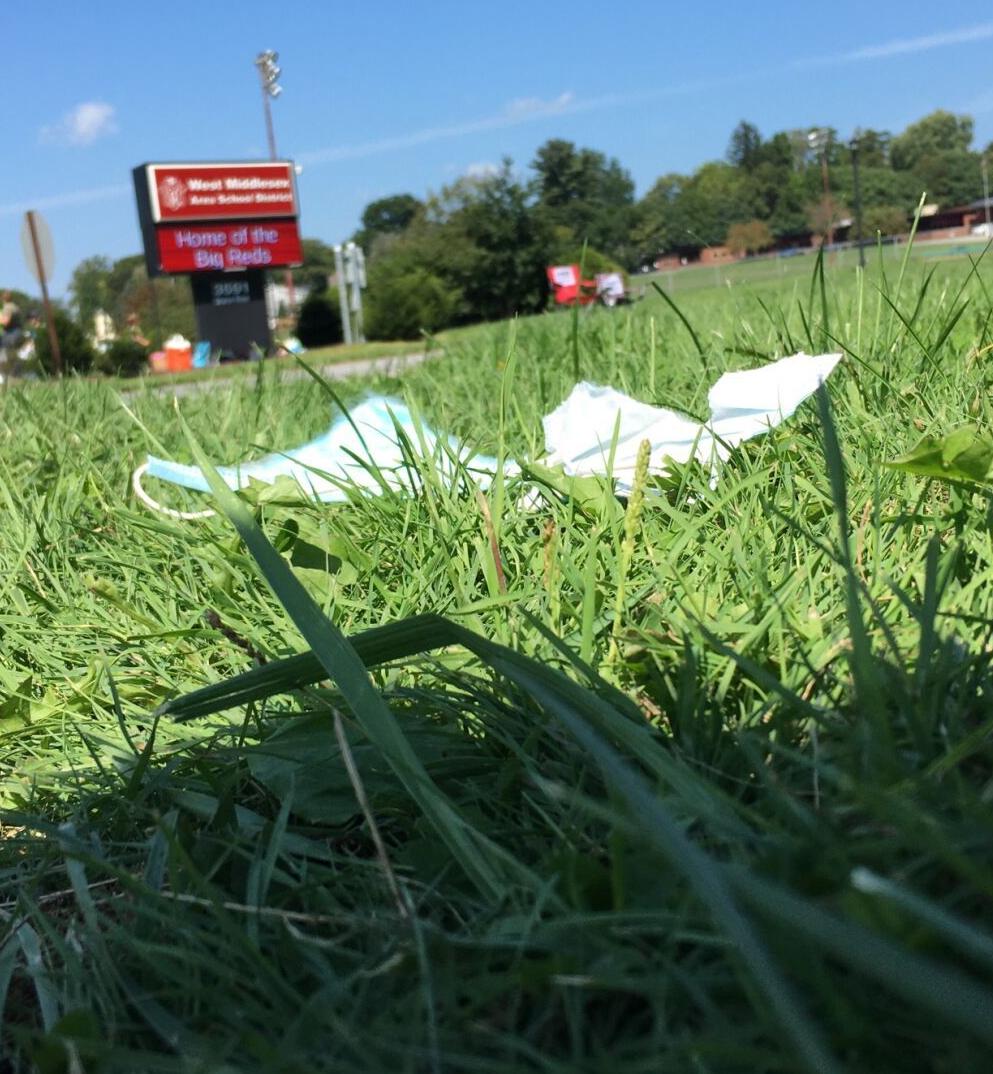 A disposable face mask lies in the grass across from the West Middlesex schools campus, where parents were protesting a mask mandate for students.

A group of parents gathered outside the West Middlesex Area School District on Tuesday morning along Sharon Road to protest the state’s mask mandate. 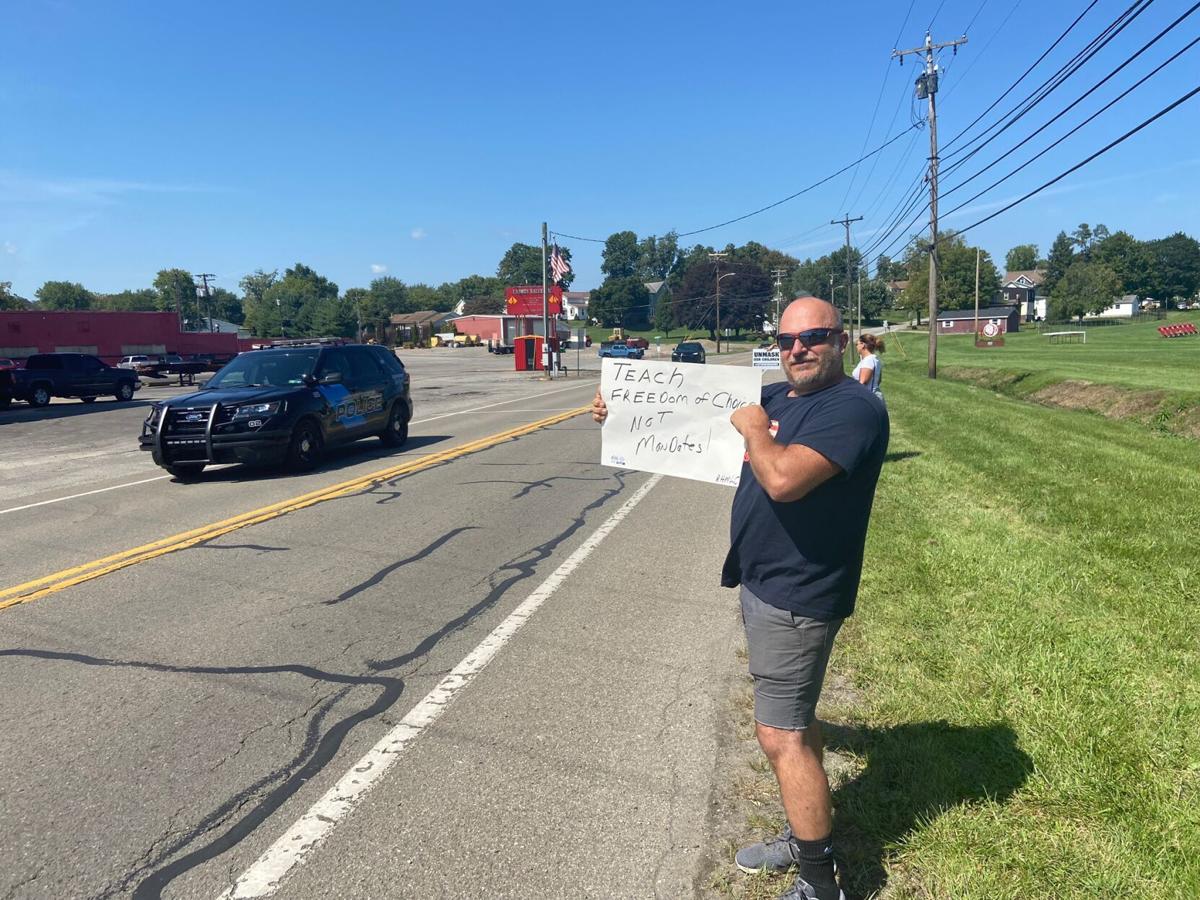 Philip Julian, who has a child enrolled in West Middlesex schools, was among the parents protesting mandatory face masks Tuesday along Sharon Road in front of the school campus.

A disposable face mask lies in the grass across from the West Middlesex schools campus, where parents were protesting a mask mandate for students.

A group of parents gathered outside the West Middlesex Area School District on Tuesday morning along Sharon Road to protest the state’s mask mandate.

As school resumed Tuesday, districts across the state followed Gov. Tom Wolf’s mandate requiring students to wear masks, even though many of those same districts started the school year without mandates due to decisions by their local school boards.

Upset parents and students balked at the mandate in a variety of districts across the state prompting a handful of small protests outside schools. But there is little wiggle room for district administrators to defy the state mandate, said Mark DiRocco, executive director of the Pennsylvania Association of School Administrators.

DiRocco said his organization hasn’t taken a position on whether the masking order is necessary or not, but that they’ve advised superintendents to follow the mandate because of the potential repercussions for failing to do so.

“We have advised them to follow the order,” he said.

Superintendents who flout the state’s mandate would be at risk of losing their administrator certifications, which would bar them from working as school administrators in the state, he said.

DiRocco said that he expects that schools will be using the same approaches to enforce the mask mandate that they used last year when they operated with mask mandates in place.

“If the parents can’t come pick the student up, I’m sure they’ll have them sitting in an isolated room” if the student refuses to wear a mask. DiRocco said that while there had been concerns about protests and large numbers of students refusing to wear masks in school, he’d seen little obvious evidence that there were widespread problems on Tuesday.

“Hopefully, the three-day weekend gave everyone a chance to calm down,” he said.

Legislative leaders in the state House announced Monday that lawmakers will be returning to the Capitol on Sept. 20, a week earlier than previously scheduled, in order to potentially pass legislation in response to Wolf’s mask mandate.

“Over the past week our members have heard from parents, families, and school administrators from across Pennsylvania who are concerned with the Wolf administration’s new statewide mask mandate. Putting forward a legislative response to that mandate is something we are planning to address with the additional session days to let them know their voices are being heard in Harrisburg,” said Jason Gottesman, a spokesman for House Majority Leader Kerry Benninghoff, R-Centre County.

This comes in the newest rounds of repeated clashes between lawmakers and Wolf over the governor’s handling of the pandemic and the use of his powers to enact mitigation measures. Lawmakers originally tried to limit Wolf’s emergency powers but failed when the state Supreme Court ruled that Wolf could veto their resolution seeking to end the disaster declaration. Lawmakers then voted to place a ballot question before voters in May, asking whether the state Constitution should be amended to allow the General Assembly to end emergency declarations. Voters approved the change to the state Constitution and in June lawmakers voted to end the COVID disaster declaration.

Wolf, in announcing the school mask mandate, said that the Department of Health was authorized to order schools to implement a mask-wearing requirement under powers provided by the Disease Control and Prevention Law.

The state’s mandate requires students to wear masks indoors with a few exceptions, including causing or exacerbating health problems, including breathing difficulties, mental health issues or other disabilities.

“School entities are expected to enforce the Order as they do other state laws and school rules and policies,” a statement provided by the Department of Education said. “Reasonable steps may include developing and implementing a policy, enforcing already existing policies, training staff on conflict management, and monitoring and taking corrective actions in instances of noncompliance among staff, students, or visitors. School entities should follow their local policies and procedures on managing student and staff misconduct,” according to the Department of Education.