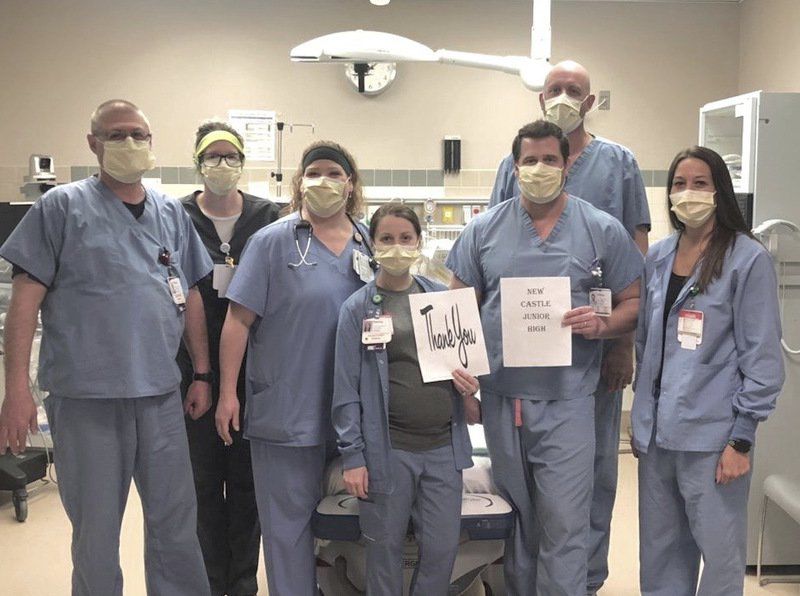 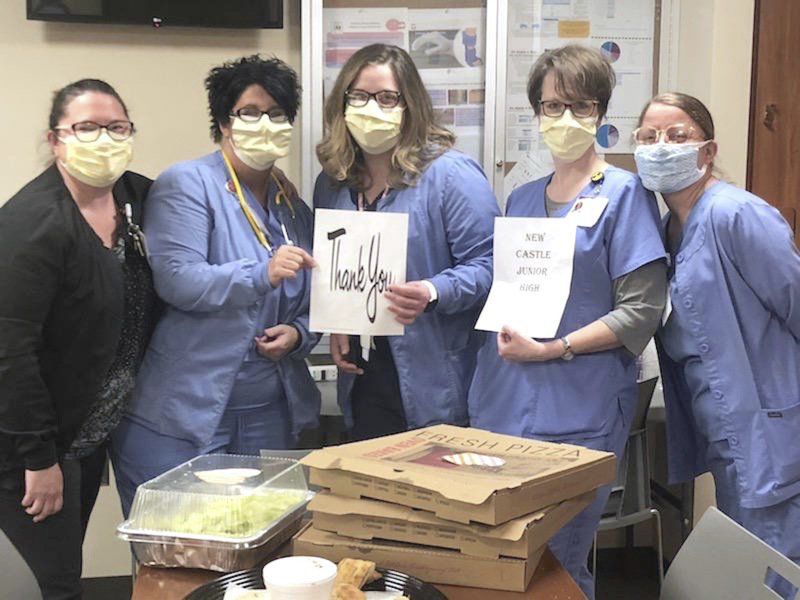 The New Castle Area School District’s junior high teachers and support staff showed their generosity this week to local hospital workers who are on the local front lines of the coronavirus.

Carol Morell, the junior high school principal, arranged for food to be delivered to UPMC Jameson Hospital’s entire staff Monday as a way to say thank you to the community’s only hospital.

The school district itself has been receiving many donations and sponsorships to help feed New Castle families with its free dinners three times a week. Morell felt that feeding the hospital workers would be an appropriate way to show appreciation to those who are most at risk during the coronavirus pandemic.

Morell explained that she typically likes to provide food once a month to the school staff for teacher appreciation, but she thought instead, this week she would like to donate lunch to the hospital’s emergency department. But when she pitched that idea to the teachers, they liked the idea so much they reached into their own pockets and purses.

Altogether, Morell amassed $2,000 in donations from the teachers, paraprofessionals and secretaries of grades 6 through 8.

“A lot of people were donating meals to the families, so we wanted to do something different,” she said.

She ordered food from Ali’s Upper Crust on Highland Avenue, which prepared enough pizzas, pepperoni and sausage rolls, pizza greens and salad to feed six departments and a command center at the hospital, Morell said. She had enough money leftover to purchase 30 gift cards from Ali’s to cover the other shifts of the hospital so everyone could benefit from the gesture.

We “wanted to spread it around,” Morell said. They also had a sign made from the teaching staff as a thank-you to the hospital workers for their dedication. In return, the hospital staff made thank-you signs for them.

On behalf of UPMC Jameson, we are extremely appreciative,” said Carrie Milliken, RN clinician in the emergency department who helped coordinate the food effort from the hospital end.  “We love our community and we thank the New Castle junior high for the food, along with everyone else in the community who has donated.”

The hospital also has received other food donations from businesses, churches and individual families.

“They’ve been very supportive. For such a small community, they have very large hearts,” she said.

Lawrence County’s count of coronavirus cases has held steady at around 63 or 64 for the past week.

“We are at a manageable rate right now,” Milliken said of the emergency department. “We are well prepared.”