Rodney Erickson, former Penn State president (2011-2014), talks with the The Tribune-Democrat about the Jerry Sandusky sex abuse scandal in an interview at Erickson's home near State College on Thursday, August 5, 2021. 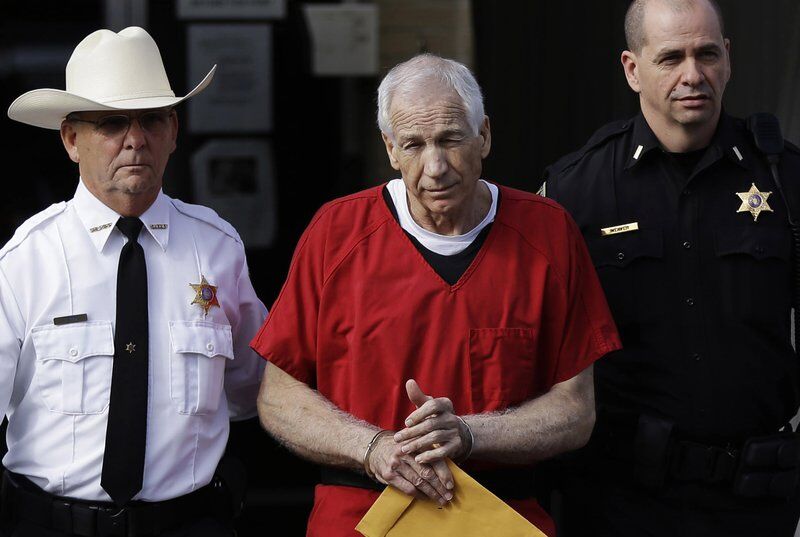 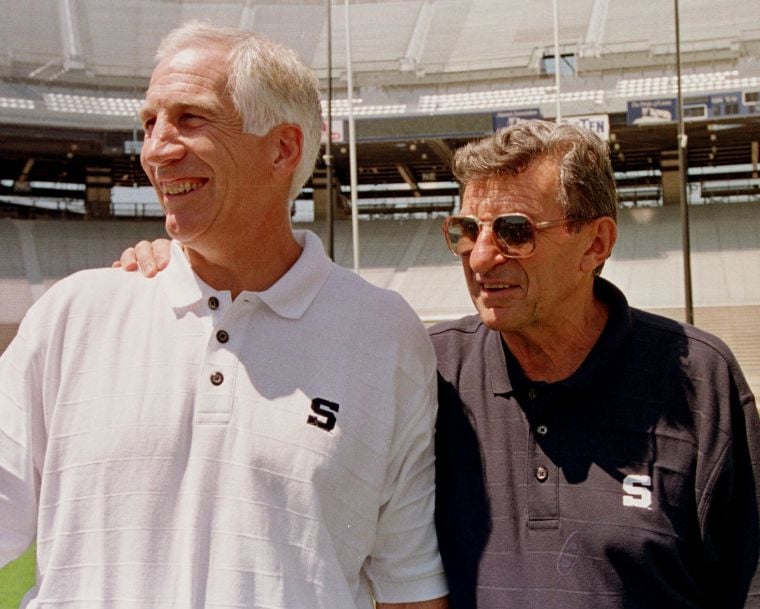 Paterno poses with defensive coordinator Jerry Sandusky on Aug. 6, 1999. The shocking child sex abuse allegations against Sandusky, and Paterno's response to a report of alleged abuse, led to him being ousted.

Rodney Erickson, former Penn State president (2011-2014), talks with the The Tribune-Democrat about the Jerry Sandusky sex abuse scandal in an interview at Erickson's home near State College on Thursday, August 5, 2021.

Paterno poses with defensive coordinator Jerry Sandusky on Aug. 6, 1999. The shocking child sex abuse allegations against Sandusky, and Paterno's response to a report of alleged abuse, led to him being ousted.

This is the latest in a series of stories from CNHI exploring the impact of the Jerry Sandusky child sex-abuse scandal that hit Penn State 10 years ago this fall.

Some of that legislation dramatically changed the requirements for those who work with children and those who give their free time to help children.

“Sandusky elevated awareness,” said Cathleen Palm, founder of the Center for Children’s Justice, based in Reading.

“So in one way, that’s a positive, but like so much in life, something that is a gift is also a bit of a burden.

“We have essentially overloaded the system in the last several years. We have more and more reports. and then there are just added complications on the system, staff turnover, the opiate crisis, COVID-19. So we have both overloaded the system, at the same time that the external pressures beyond the reports were already increasing.”

This change was directly inspired by the Penn State controversy where there were lingering questions about the actions or inaction of legendary football Coach Joe Paterno, then-President Graham Spanier and others at Penn State.

Sandusky was found guilty in June 2012 of 45 counts of child sexual abuse – convicted of molesting 10 boys over a 15-year period. He is serving a 30- to 60-year sentence at the State Correctional Institution at Laurel Highlands in Somerset County.

Paterno was fired when the scandal came to light, along with Spanier – who was convicted of child endangerment for his role in failing to alert authorities after Mike McQueary notified university officials that he’d seen Sandusky in a shower in a locker room.

Rodney Erickson, who was named interim president after Spanier’s ouster, said that when scandal exploded university officials were left scrambling.

“This was dropped on us, literally at the 11th hour,” Erickson said inn an exclusive interview with CNHI News. “I didn’t find out Curley and Shultz were going to be indicted until Friday afternoon (Nov. 4). ... Before that, we’re meeting with some of the trustees and the president’s council trying to figure out what’s going on. and so, we were ill prepared. and there’s no way you could be prepared for something like that.”

Erickson added: “We felt early on, the administration and the board, the faculty and the students, that it was important to show our genuine concern for the victims, and you could see that taking place in a number of ways, really in a rather organic fashion. You may recall that the students organized a candlelight vigil that first week, and came together at the football game to support the victims of child abuse.”

The state dramatically expanded the requirements for background checks to cover almost every adult who has the opportunity to be alone with children through a volunteer or professional position.

And the state pushed for wide use of children’s advocacy centers, places where specially-trained forensic interviewers are available to meet with children who have been abused with an aim toward reducing the number of times the victims are questioned by investigators and ensuring that interviews are the most effective, Palm said.

However even with the state’s move to expand those centers, there are still concerns that in too many cases, police and other well-intentioned investigators may be subjecting victims to questioning instead of directly referring the children to the CAC’s, she said.

The changes likely helped make crimes by predators such as Sandusky less likely by increasing awareness and motivating people to report their suspicions, Palm said.

But they also greatly intensified the pressure on the child protection system as calls about potential abuse went through the roof.

In early 2015, there were so many calls being placed to the the state’s ChildLine hotline – 1-800-932-0313 – that state officials estimated that four in 10 callers were on hold so long they gave up before they could get a caseworker on the line.

Part of the challenge at the time was that people who had suddenly been told they were required to report suspected abuse often didn’t get any training to help them recognize abuse so many of the calls were unnecessary, said Haven Evans, who was director of the hotline from 2013-2016. Any time there is a high profile child sex-abuse scandal, it prompts a spike in tips because people become hyper aware of the issue, Evans said.

But the changes in state law amplified that effect dramatically.

Staff on the ChildLine hotline worked “heroically” to manage the flood of calls, a situation made all the more difficult because initially all reports had to be passed along to county caseworkers through oral reports instead of by written communication.

Over the years, there’s been an increasing focus on helping mandated reporters understand the law and their obligations, said Evans who as director of programs for the Pennsylvania Family Support Alliance now focuses on providing the training for people who are required to report suspected abuse.

Evans said that while the ChildLine hotline was inundated with calls, there was no way of knowing whether or how many of those calls were appropriate.

The hotline operators often have such little information they can’t gauge how credible the information is and even a tip that doesn’t seem significant can lead caseworkers to situations where children are actually in trouble, she said.

Almost a decade after the Sandusky case broke, the state continues to grapple with how to improve child protection with one of the most ambitious updates to the state’s child protection law since the post-Sandusy reforms beginning to move just this week.

On Sept. 22, the Senate Aging and Youth committee by a 9-1 vote approved a measure that would change the timelines used for expunging records of abuse allegations.

The measure also includes language to make cooking methamphetamine in front of a child a legal form of child abuse.

The measure would also seek to streamline the process used to investigate child fatalities and near fatalities.

Palm’s group has criticized the legislation because proposed changes would limit the public’s access to information about specific cases – replacing public reporting about death investigations by lumping information into aggregated data without specific descriptions of specific deaths.

The information now available through the state’s abuse reports provide a “window into the scope of child abuse fatalities and near-fatalities and invite, albeit limited, sense of trends that need tackled,” according to an analysis of SB 871, completed by the Center for Children’s Justice.

Eliminating the public reports without a more thorough discussion of the proposed change is “wrong-headed,” the group said.

At an August hearing on the issue, Jonathan Rubin, deputy secretary for the Office of Children, Youth and Families in the Department of Human Services, said that the agency seeks to get the law changed to avoid releasing reports identifying child victims by name in a bid to support “the family who has suffered significant trauma.”

Current law already forbids disclosure of the child’s name in near-fatalities. Rubin assured that not identifying the child “does not impede the department’s ability to analyze the circumstances of the fatality or near fatality and develop improvement plans from the information.”

The (Johnstown) Tribune-Democrat contributed to this CNHI News report.