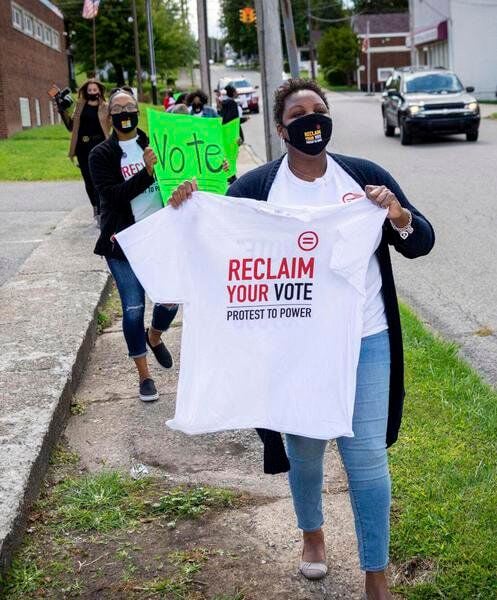 WILKES-BARRE — Paulino Gonzalez, a retired janitor from Wilkes-Barre, supported Donald Trump in the 2016 election and he plans to vote for Trump again next month.

He thinks just as many, if not more, of his neighbors will do the same.

Gonzalez said some people are unwilling to openly support Trump, but he’s not bashful about it. He proudly wears Trump shirts and Trump hats and when he does, he never hears criticism, he said. More often, people say that they, too, like the president, Gonzalez said.

“There’s a lot of people who are afraid to admit they’re going to vote for the president,” Gonzalez said. “I went to the grocery store the other day and I had a Steeler jacket on and a Trump hat. Guy stocking the shelves said, ‘You’ve got two winners.’”

A few blocks away Ed Backes, the owner of Ed’s Barber Shop, said he doesn’t like to advertise his political views because he doesn’t want to alienate potential customers.

But one thing he’s noticed from listening to the talk of the customers as he clips their hair: “They all seem to be Trump supporters.”

Wilkes-Barre is the county seat of Luzerne County. In 2016, Trump won Luzerne County by 26,000 votes even though Democrats outnumbered Republicans in that county by almost 34,000.

Trump’s edge in Luzerne County was the equivalent of more than half of the 44,000 votes by which he won statewide.

Former President Barack Obama had won in Luzerne County in 2008 and 2012.

Now as Trump looks to win re-election, the Democrats’ advantage in Luzerne County has narrowed as Trump’s support in this blue-collar northeastern Pennsylvania county has only intensified, supporters say.

Democrats’ registration advantage has been trimmed to fewer than 21,000 in Luzerne County and close to 3,000 Democrats have switched their party affiliation to Republican this year alone.

Lou Ferdinand has been setting out Biden signs 30 miles away near Hazleton, in southern Luzerne County.

Ferdinand said that there is no question that Trump’s backers in the area are enthusiastic and happy to display their support, with informal rallies and car parades.

He said he’s been a Democrat most of his life – an exception being a period when a family friend was running to be the mayor of Hazleton as a Republican.

Still, he said, he’s not that excited about former Vice President Joe Biden as the party’s nominee.

“I like (Biden) because I don’t like Trump,” Ferdinand said. “I think Biden is a little old to be running but that’s the only choice we have.”

A couple blocks away, Dominic Lyons, a retired auto mechanic, is tidying up his front yard, using a leaf blower while his Keeshond yips in the fenced-in backyard.

Lyons has a Trump sign in his yard. His neighbor has a Biden sign, but Lyons said it’s only because the neighbor didn’t want to refuse when Ferdinand asked if he could post a sign there.

Back at Ed’s Barber Shop, Backes said he is a registered Democrat but has not voted in more than a decade.

Neither candidate has really inspired him to break that streak, he said.

“One of the main things, the saddest thing is: This is the best we’ve got?” he said.

As Backes talks, Anthony Bobyak enters the barber shop and says he needs a trim because his wife has advised him it’s time for a family portrait.

Bobyak said he’s conflicted. He is worried that political discourse has become so toxic it’s dangerous. Yet, he also knows that personally, his fortunes have been improving.

“I feel like this world is in trouble,” he said. “It’s a melting pot of destruction. Everything that can go wrong is going wrong.”

After years of working in restaurants, Bobyank said he’s found that his earnings have improved significantly since he changed jobs.

“I’ve been making the most money I’ve ever made in my life in the last couple years,” Bobyank said. “The warehouses started popping up around here and I’m making $8-$9 an hour more than I was when I was slaving away. I can lift a box all day.”

Bobyank said he’s not sure how he’ll vote in November. He’s toying with the idea of writing in Pete Buttigieg’s name.

“I don’t mind Trump,” he said, while adding, “He talks too much. He tweets too much. He’s brought out the worst in America.”

Like Bobyank, he said he thinks the the economy had been improving dramatically since Trump’s election.

“He had the economy rolling,” he said. “If it wasn’t for this pandemic, I don’t think Biden would have a chance.”