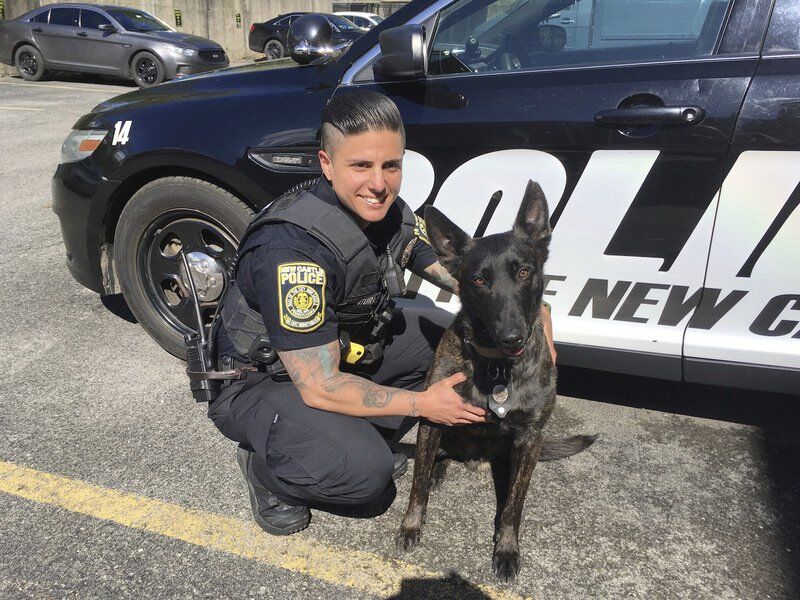 Amanda Ventura and her drug-sniffing and tracking canine, Frankie, are ready for work on a Friday afternoon. 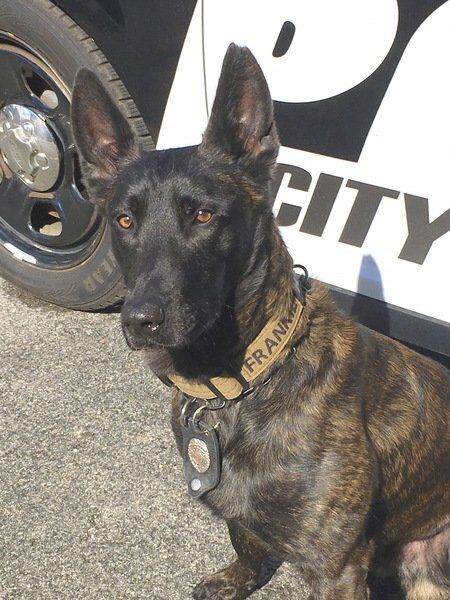 Frankie, a Dutch shepherd, is the newest addition to the New Castle Police Department. His handler is Amanda Ventura. 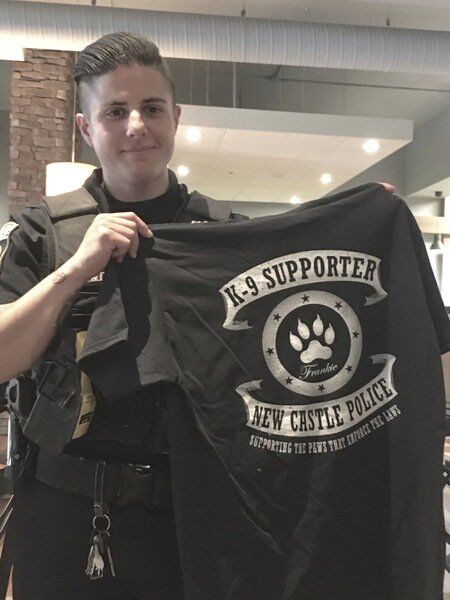 New Castle officer Amanda Ventura shows the T-shirts she is selling to raise funds for another canine for the city police department. 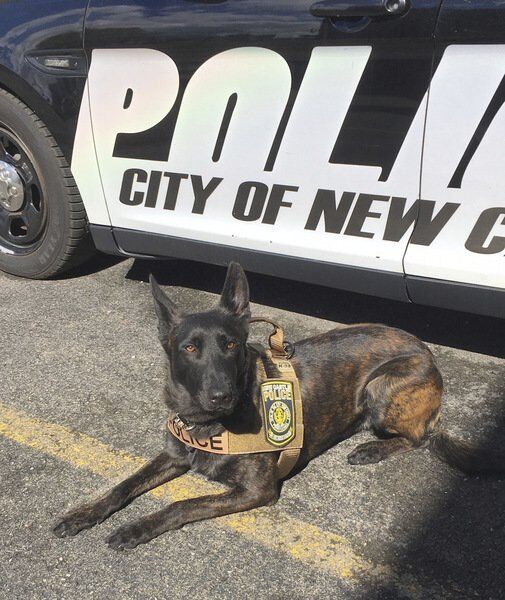 Frankie, a Dutch shepherd police canine, sports the vest that identifies him as a New Castle officer.

Amanda Ventura and her drug-sniffing and tracking canine, Frankie, are ready for work on a Friday afternoon.

Frankie, a Dutch shepherd, is the newest addition to the New Castle Police Department. His handler is Amanda Ventura.

New Castle officer Amanda Ventura shows the T-shirts she is selling to raise funds for another canine for the city police department.

Frankie, a Dutch shepherd police canine, sports the vest that identifies him as a New Castle officer.

Amanda Ventura has always been a cat lover. That was, until Frankie stole her heart.

Frankie, a 2-year-old Dutch Shepherd, has now become her sidekick, partner in crime, best friend and an added layer of protection when she is on patrol as an officer for the City of New Castle.

It all started when city police chief Bobby Salem put out the invitation for any officer who was interested in becoming a police canine handler. Ventura stepped up to the challenge.

“I wasn’t interested at first,” she said. “But when I started reading about it and watching videos, I saw what (the dogs) are capable of doing.”

She talked with other past dog handlers and decided to apply.

The department acquired Frankie from Bullock’s K-9 Training in Greenville, N.C. He has been trained to sniff narcotics, and in tracking, article searches and apprehension.

“We’re excited to have him,” Salem said of having the four-legged officer on his staff.

“He works 40 hours a week, the same shift that Amanda works. He gets paid benefits in the form of toys and bones.”

Ventura is the department’s only dog handler right now, but there was a time when the city police had five dogs.

Frankie made an immediate impact on March 24, his first week on the job, by detecting a sizable quantity of drugs in an arm compartment of a vehicle during a traffic stop. He was deployed for an open-air sniff and positively indicated drugs on the rear seat of the car. A search warrant was executed and because of Frankie’s keen nose, officers found more than 86 grams of cocaine, 30.62 grams of crack cocaine, 140 ecstasy pills. The police also confiscated about $1,700 during the bust.

“We’re sure that will be one of many,” Salem said.

Frankie was pre-trained in North Carolina, and when he and Ventura were united, it wasn’t quite love at first sight — they had to acclimate to each other.

“I had to learn how to work with him,” she said, admitting she was a little timid at first.

“I had this dog that was trained to bite, but I knew nothing about him,” she explained. She spent the first two weeks petting him, hugging him and getting used to him, and vice versa, and soon they were inseparable.

When she got him, he didn’t smell very good and she had to give him a bath.

“It was very stressful,” she said. She didn’t realize that when she sprayed him with water, he liked to bite at it. She wasn’t sure if he was biting at her or being playful. She also didn’t understand that his teeth would chatter when he became excited.

But once she learned his idiosyncrasies, she realized there is always something new to learn about him and his work on the job.

Once a month, she and Frankie get together with other officer dog handlers and their canines from throughout Beaver and Lawrence counties and have a group training for a day, and she will periodically train with other Lawrence County canine officers.

Frankie has been busy since his first day of work. He’s been on traffic stops, drug arrests and tracking accused criminals on foot pursuits, “and he’s really good at it,” she said.

He’s trained to sniff for opioid street narcotics and associate the smell of narcotics with his dog toy. When he finds the odor during a search, he know’s he’s going to get his toy, and it’s the only time he gets to play, she explained.

If the police are looking for a gun or other object and Frankie finds it, he’ll lie down by it and put his paws over it, she said. “That’s my favorite thing to watch him do. If I throw my keys into the grass, he does a zigzag pattern and then will lie with them under his paws.”

She marveled that “you can teach a dog anything.”

Although Frankie was bred in Mexico, he responds largely to German, Czech and English commands, but Ventura speaks to him mostly in German.

As for his interaction with others, “he’s super-friendly,” Ventura said. “He loves people.”

He also is trained to be passive so that when he’s on a car search, he doesn’t scratch the vehicles, she said.

Ventura has been a police officer for 10 years, both full-time and part-time, combined. She has been on the New Castle force for seven of those years and also worked four years as an officer in Wampum Borough.

Being a dog handler “is a lot of responsibility,” she said, “but it’s worth it. It’s another whole side to the job.”

Ventura said she is grateful to Reed’s Services pet supply store in Union Township, which has donated anything Frankie needs, including free baths.

“They love dogs,” she said.

“It’s an expensive investment,” Salem said of getting a canine for the department.

The dog itself cost about $13,000 and the custom police K-9 vehicle cost about $30,000. Since uniting with Frankie, Ventura has become so passionate about police canine work that she has started a fundraising effort for the police department to acquire a second dog for another handler.

She is selling New Castle police canine t-shirts and keychains with Frankie’s picture with the hope of raising enough money for the department to acquire a second dog. The shirts were donated by Hovis Auto Parts on Cascade Street, and were a popular item at the department’s “Coffee With a Cop” community event last week.

“(Hovis) picked New Castle to receive the money for the T-shirt sales,” she said. Anyone who wants a T-shirt or a keychain can contact her through the New Castle police department at (724) 656-3570.

In addition to her fundraising effort, the police department is trying to raise money from other sources for another canine, Salem said, adding, “This dog has given us another tool to help protect the community.”