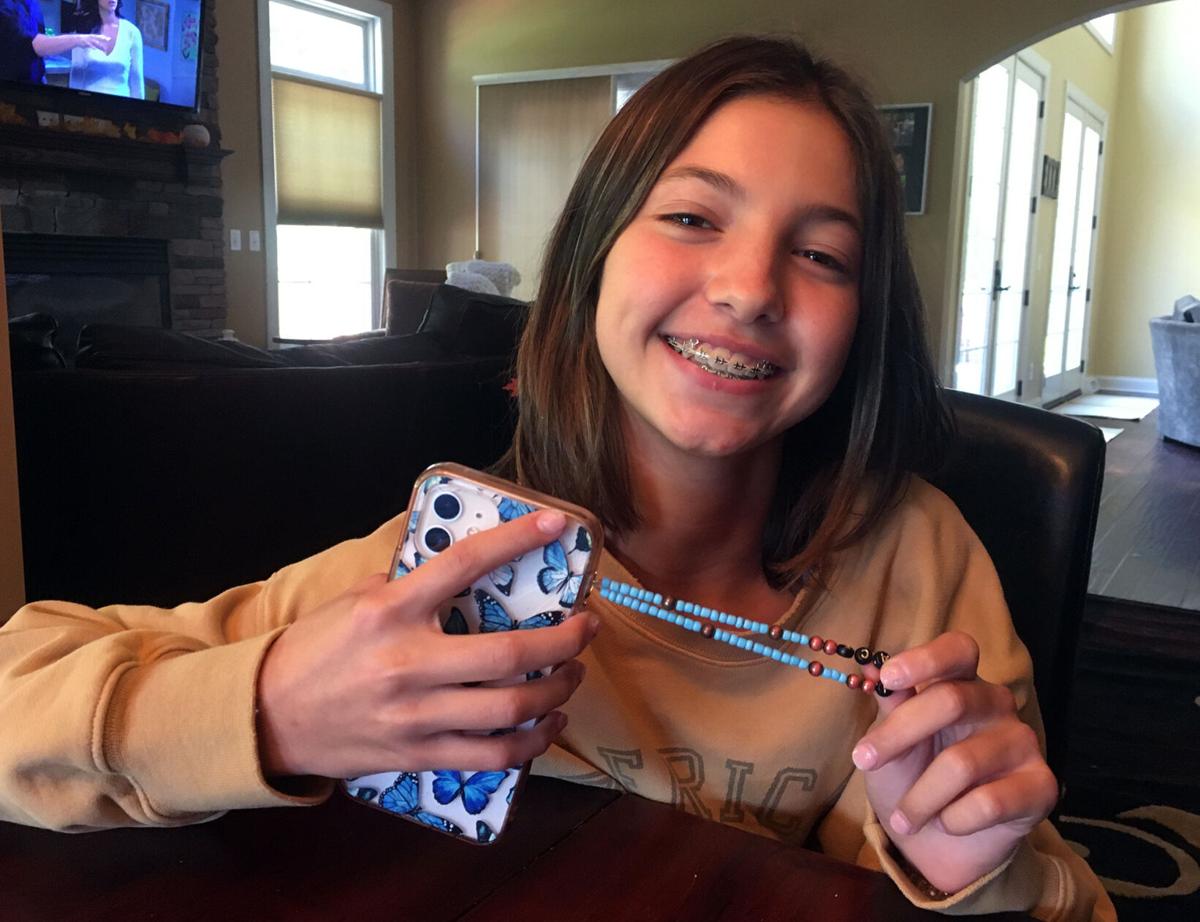 Camryn Lanigan shows one of the phone charms she makes and sells to benefit Arise, formerly the Crisis Shelter of Lawrence County. 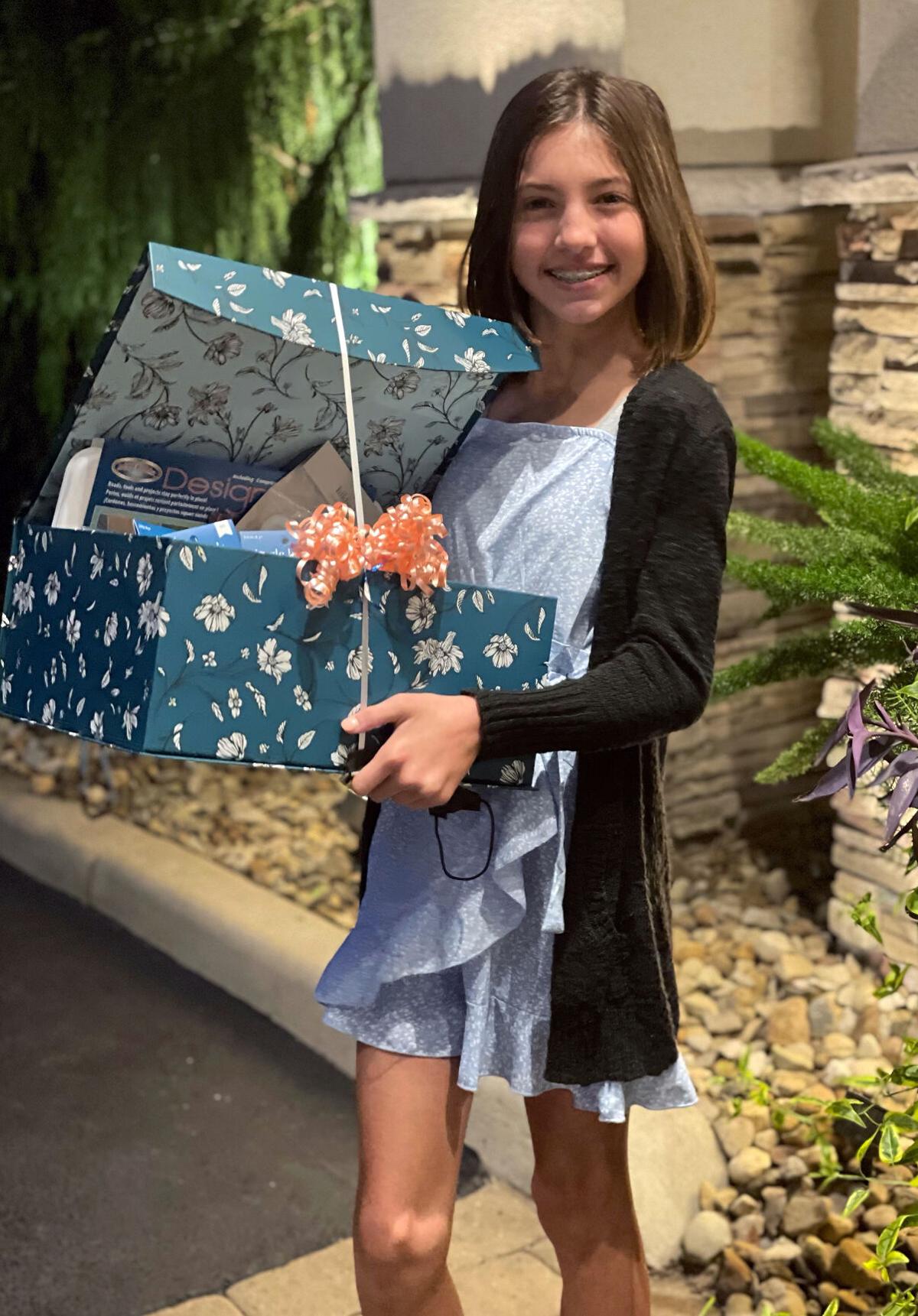 Camryn Lanigan shows the box of craft supplies she received as the recipient of the Arise Future Award. 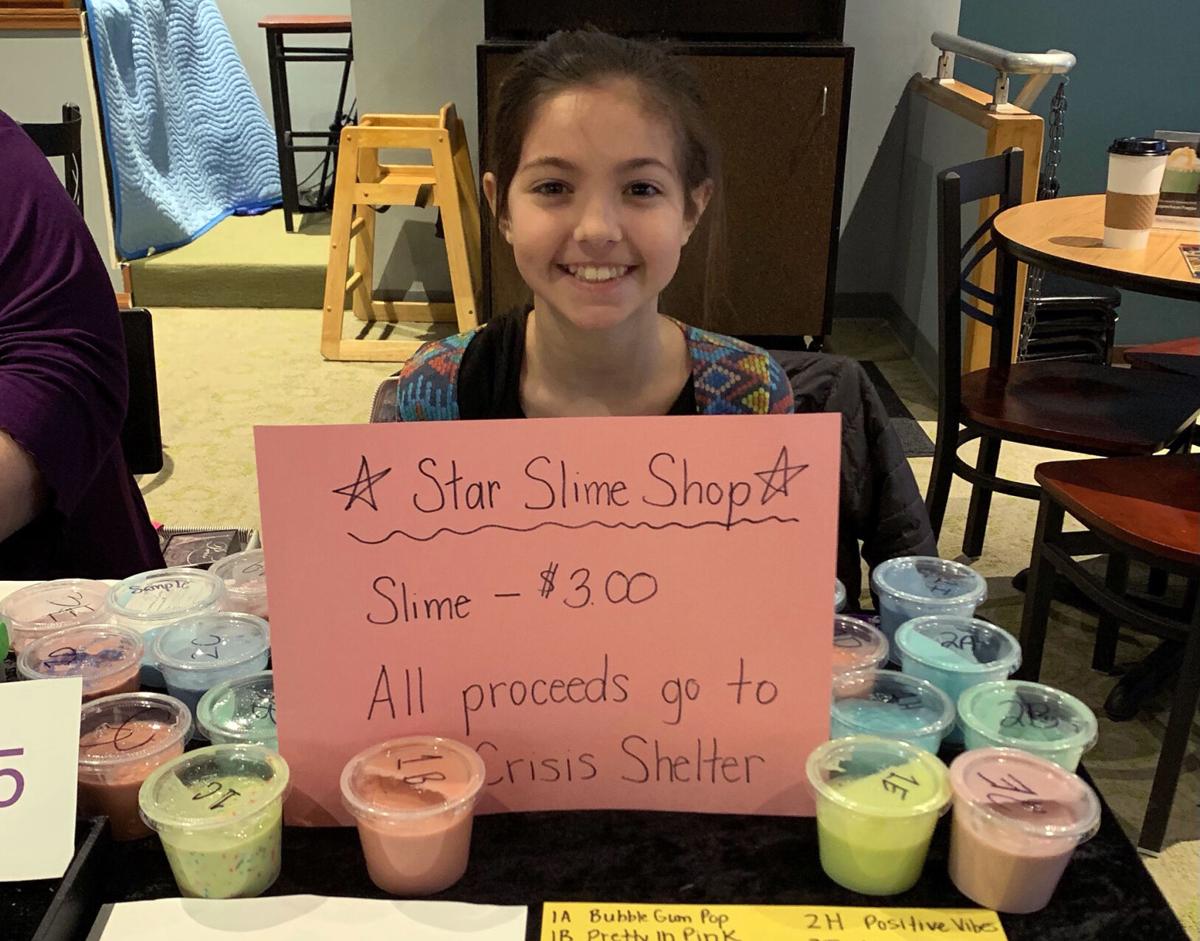 ABOVE: Camryn Lanigan sets up shop to sell her slime. RIGHT: The Neshannock eighth-grader shows off one of her phone charms. 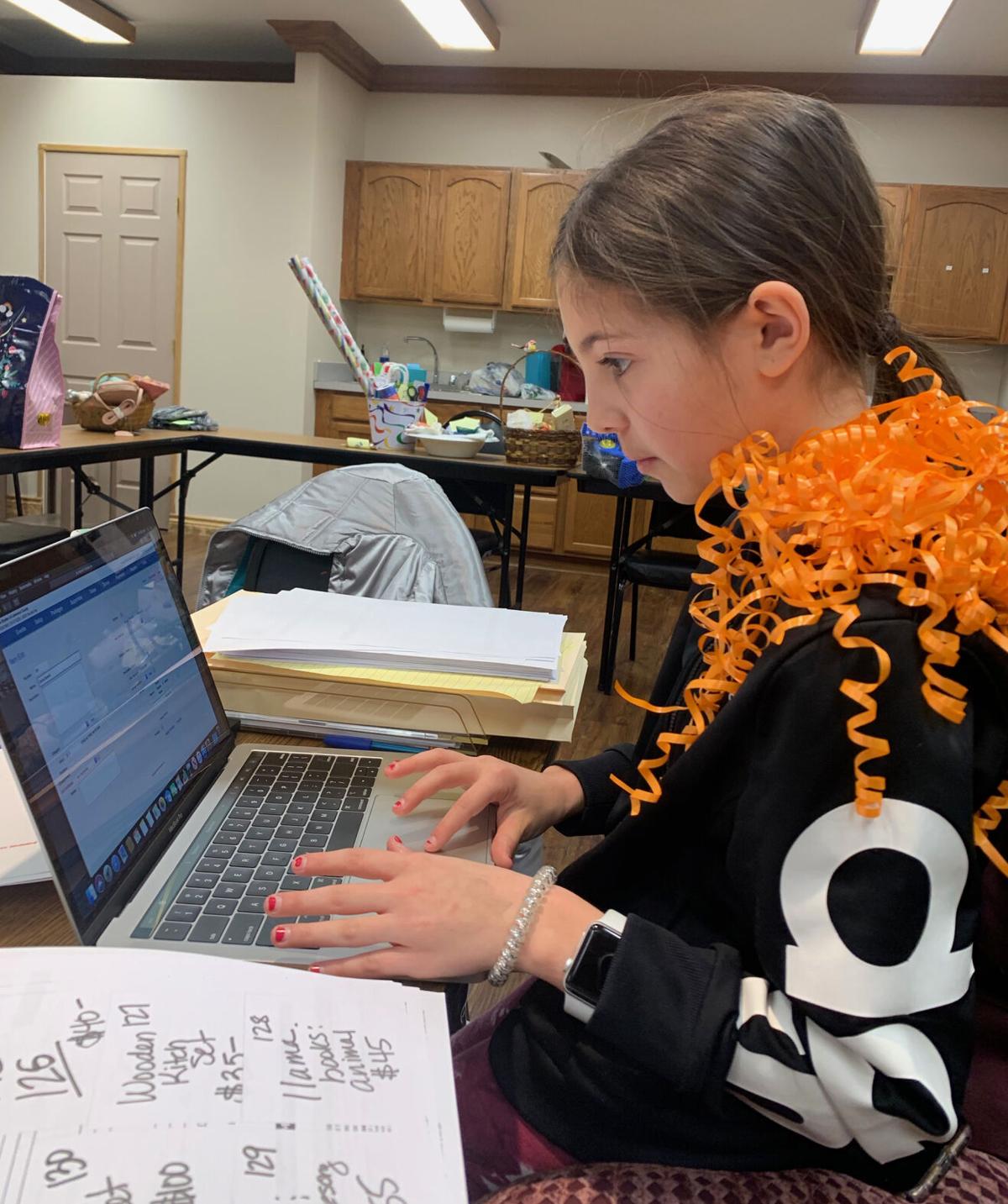 Camryn Lanigan does some computer work at Arise, formerly the Crisis Shelter of Lawrence County. 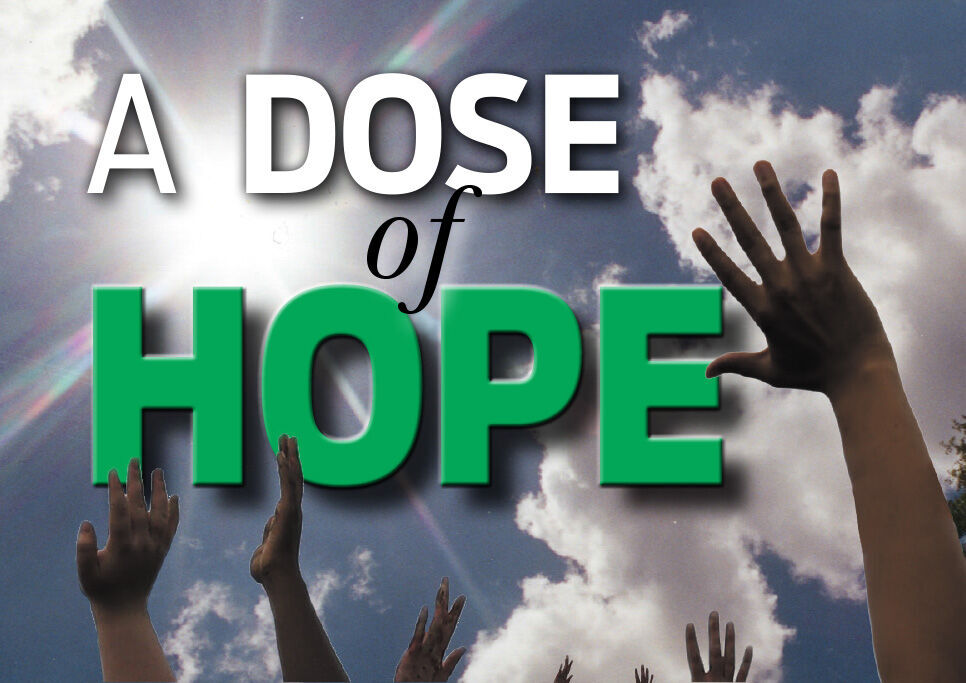 Camryn Lanigan shows one of the phone charms she makes and sells to benefit Arise, formerly the Crisis Shelter of Lawrence County.

Camryn Lanigan shows the box of craft supplies she received as the recipient of the Arise Future Award.

ABOVE: Camryn Lanigan sets up shop to sell her slime. RIGHT: The Neshannock eighth-grader shows off one of her phone charms.

Camryn Lanigan does some computer work at Arise, formerly the Crisis Shelter of Lawrence County.

But it’s willing to start with fresh slime.

That’s a big reason why Arise — formerly known as the Crisis Shelter of Lawrence County — bestowed 13-year-old Camryn Lanigan with its Future Award at the agency’s 40th anniversary celebration. The Neshannock Township eighth-grader has created three items — bookmarks and phone charms are the latest two — that she has sold in order to donate the proceeds to Arise.

But her efforts started over a year ago with homemade slime.

For the Nickelodeon-challenged, slime is a gooey, thick-textured substance that has properties of both a solid and a liquid. It was first popularized on the cable network’s show “You Can’t Do That on Television” in the 1980s and became a trademark image for Nickelodeon.

Camryn is the daughter of Shane and Nicole Lanigan, the latter of whom is a close friend of Arise board president LeeAnn Fulena. Around age 9, Camryn accompanied Fulena to help sell raffle tickets at a local supermarket. Eventually, she also learned of Fulena’s own Charitable Charms initiative, through which Fulena creates jewelry and sells it to raise money for various causes.

“When she found out,” Fulena said, “Camryn started making slime, and she would come and she would sell the slime. I have pictures of her and her sister sitting at the end of their driveway selling slime, and they have signs up that proceeds benefit the Crisis Shelter, so people are giving them money.”

“I really like to play with it and make it,” Camryn said. “That just made me want to sell it for people.”

“People bought it for their kids and grandkids, and also kids bought it,” she said.

She and her soon-to-be-8-year-old sister Maya sold cups of slime for $3 each, and ended up donating about $150 to the shelter.

A batch of slime, Camryn explained, takes only about five minutes to make.

“But how long does it take to get it out of the carpet?” Fulena asked her.

“That’s the real question,” Nicole Lanigan responded. “We still have patches of it in the carpet.”

Hence, the move to bookmarks for Fundraiser No. 2, and currently, beaded phone charms, which Camryn said have become the most popular item yet “because a lot of people have phones.”

Camryn and her mom spent a recent weekend creating many more of the charms, which Camryn will be selling at Arise’s benefit golf scramble Sept. 19.

Camryn’s other big interest is studying dance. She is a student at Evolve Dance Complex in Cranberry Township, and has taken honors in competitions as far away as Michigan and Florida.

As a seventh-grader, she participated in track at Neshannock, using her dancer’s legs to propel her through the high, long and triple jumps. However, she’s given that up to focus on dance, and hopes to continue her studies in that area in college.

She has no intention, though, of stopping her efforts on behalf of Arise, where she has also helped with preparations for the agency’s annual auction.

“Lee (Fulena) has inspired me to help them because she works really hard and helps out all the people, and I just really like to help people in general,” said Camryn, who also has a 12-year-old brother, Brody.

She’s grateful for the award she received from Arise, which included materials to keep her fundraisers going, but said she’s not looking for accolades.

Nonetheless, Fulena said, “It’s important that you become an example, and then it inspires other people to do something.”

Toward that end, Camryn offered some advice to others in her age group.

“Try your best to help the community and people around you,” she said. “And maybe try to start a business like me and sell it and make money for the shelter or another group.”

(Interested in buying a phone charm from Camryn Lanigan? Contact Arise — formerly the Crisis Shelter of Lawrence County — at (724) 652-9036.)