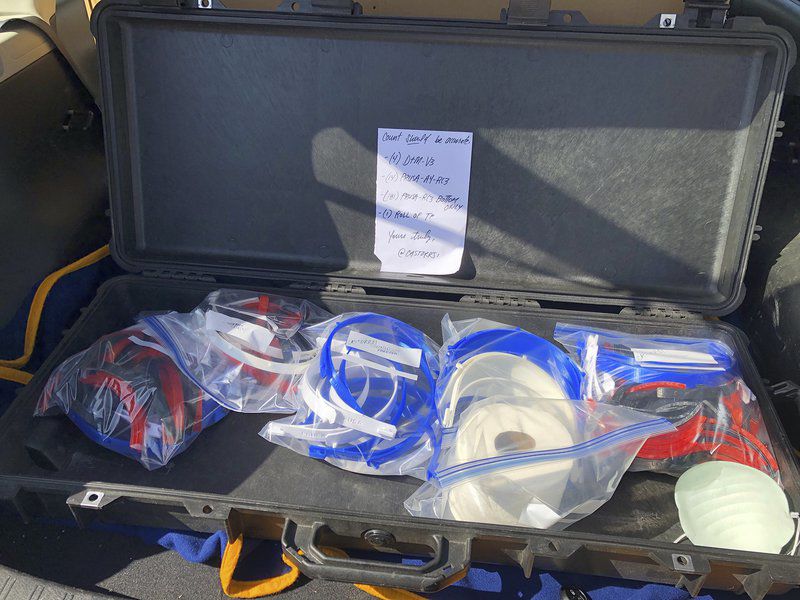 This case full of surgical face shield parts that Ryan Castor printed over the weekend -- with a roll of toilet paper added for a bit of humor -- was delivered Monday to a fulfillment site to be packaged and sent out to medical sites in need. 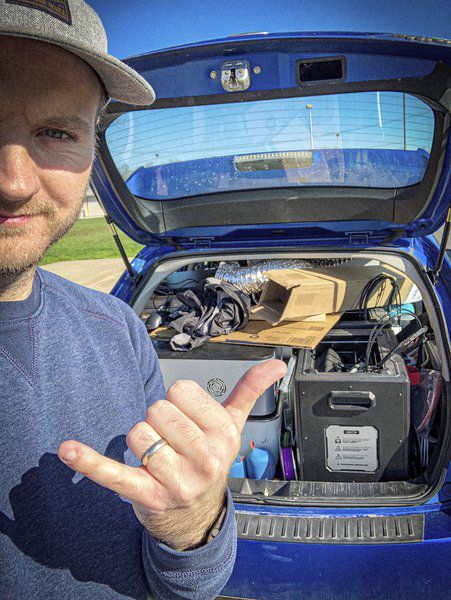 The back of Ryan Castor's car was packed full on the day and retrieved equipment and materials from Mohawk High School in order to use the 3D printing process to create parts for surgical face shields. 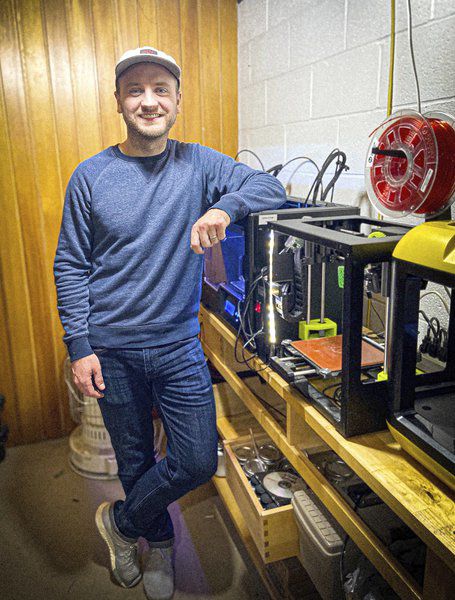 Ryan Castor stands next to his set-up of 3D printers and laser engravers in the basement of his home. 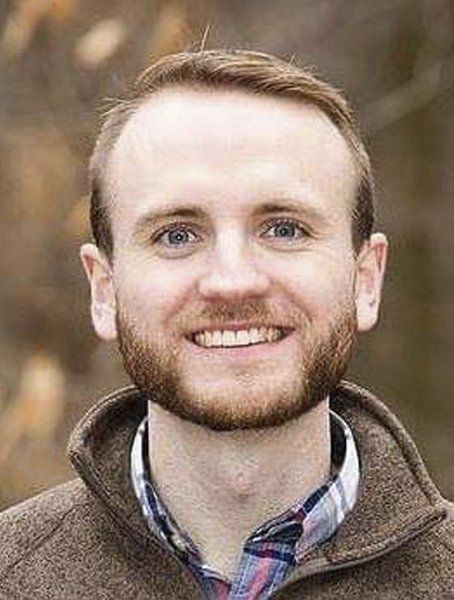 This case full of surgical face shield parts that Ryan Castor printed over the weekend -- with a roll of toilet paper added for a bit of humor -- was delivered Monday to a fulfillment site to be packaged and sent out to medical sites in need.

The back of Ryan Castor's car was packed full on the day and retrieved equipment and materials from Mohawk High School in order to use the 3D printing process to create parts for surgical face shields.

Ryan Castor stands next to his set-up of 3D printers and laser engravers in the basement of his home.

Like a lot of teachers, Ryan Castor is working from home now.

But the Mohawk High biology and anatomy instructor is doing more than just providing online lessons for his students. Using six 3D printers — five that the district allowed him to take home, and one of his own — plus a couple of laser engravers, Castor is fabricating parts used in the making of surgical face shields.

And he’s not alone.

Castor is part of a Pittsburgh-based group founded called 3DPPGH. Founded four years ago by Chris Yohe, the organization has between 200 and 300 members, Castor said, and they, too, have been turning out the shield parts.

Castor and the others are creating the brace, or headband, at the top of the shield, and the clip at the bottom that maintains the curvature of the plastic shield so that it wraps around the face. The laser engraver is used to cut out the clear plastic shield itself.

Over the weekend, Castor printed enough parts for 199 masks, and he was delivering them Monday to a fulfillment site where they would be packaged and sent out to anyone who has logged a request with the organization. The group can be reached by emailing info@3dppgh.net.

Castor has a 3D printer of his own at home, but knew he could be much more prolific using the district’s printers and materials as well.

“The school is all for it,” he said. “We’ve got quite a bit of filament, and filament has a shelf life. It will dry out and get brittle over time. So we’re actually going to be plowing through all the old filament we had in inventory.

“So it’s an opportunity to put some stuff into use that otherwise would just go to waste.”

The district was happy to support Castor, said Dr. Lorree Houk, assistant to the superintendent.

“Mr. Castor has been an innovator since he began teaching at Mohawk so it is no surprise that he is using his technology expertise to assist the healthcare profession,” she said. “The classes Ryan teaches are biology and anatomy, so the knowledge of this content infused with his technological expertise is a ‘whole new world of nerddom’ — his words — that he can delve into during this unprecedented time.

“He is a genuinely giving, caring person so it all fits together; content knowledge, technology expertise and compassion.”

As recently as the weekend, 3DPPGH’s website noted that the parts Castor and others are making “are not validated products — they are an option for when the real supplies are extinguished.”

However, that changed Sunday, causing a pause in the process for retooling.

“The masks we’ve printed so far can be used; nothing is going to waste,” Castor said Monday. “But now, all the masks that we print have to be NIH-approved.”

That, Castor said, involved “reslicing” a 3D model, as well as a little research, development and discussion among group members.

“That does lead to some down time and may increase the print time,” Castor said. “For instance, the latest version has added a visor to the top of the headband.

“It was a serious hiccup, but we got the word last night and had our answers by morning. As things change, we have to change with them. That’s pretty much the situation with the whole coronavirus situation.”

For those who lack 3D printing capability but who still want to help, the organization has established a GoFundMe page that, as of Monday, had raised more than $16,000 toward the purchase of additional materials.

Castor wishes that he, too, could bring additional help into the effort — his students.

“I take five students down to different locations in (Pittsburgh) at the end of every year, and we do a 3D modeling design and printing competition,” he said. “What stinks about this is that I can’t really have the face-to-face, hands-on learning experience with students doing this because of the situation.”

Still, like his counterparts in the Mohawk district and so many others, Castor continues to interact with his pupils online. It’s an effort he must balance with his 3D printing efforts and with spending time with this wife and three children.

“This whole remote instruction thing has been a real challenge, but it’s nothing insurmountable,” he said. “I think within the next couple of weeks all of the teachers will have found their groove.”